Spencer: Racism and discrimination are more complicated issues than I could ever properly tackle here, with or without a word-limit. What I do know is that, while good ol’ fashioned mustache-twirling racism is certainly still alive and well, a bigger problem may just be the stereotyping and “othering” of anyone perceived as different. It’s the persistent, false perception of black children as being “older” than their white contemporaries, for example, that leads to cases like Trayvon Martin, and that’s only one example amongst a nearly uncountable number. These kind of false perceptions can exist even in those who claim to be tolerant and open-minded. The ways that prejudice and oppression persist even in a supposed land of “equality” has always been a major element of Simon Spurrier and Jeff Stokely’s The Spire, but it takes center stage in issue 4.

Nowhere is that more evident than at the Baroness’ coronation, where she berates our protagonist, Captain Shå, for having ‘failed’ to capture the murderer preying upon upper-class members of society. The Baroness barely attempts to hide her bigotry — Shå also just discovered that she’s purposely sending sculpted soldiers to their death — and her cohorts are quick to snicker and giggle at Shå’s humiliation. But the Baroness’ xenophobia, shameful as it is, is unsurprising — the shock comes from her mother, the Marchioness. The Marchioness has always presented herself as fair and accepting, and she never lets that veneer fall even as she looses some surprising ideology. 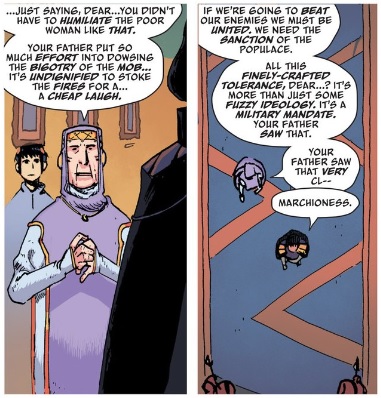 The Marchioness and her late husband never preached equality because they never actually believed in the equality of all beings; it was simply a military tactic to keep their population united and easier to control. Like all those parents who say they aren’t racist but “would never let [their] daughter date a black man,” her true feelings come out when her younger daughter Meera — who is secretly dating Shå — attempts to tell her about the relationship.

The Marchioness may view the sculpted as valuable allies, but she does not believe that they’re truly equal. Her concerns about their “differences” means that she can only view them as “others,” as different from her, and therefore scary, perhaps even dangerous. This underlying fear has kept the Spire from ever truly being equal, no matter what it proclaims, and Spurrier makes no allusions otherwise — Shå herself points out that there’s a big difference between what the Spire is meant to be and what it actually is, and we’ve seen first-hand the kind of hatred this disparity inspires.

Yet, compared to the danger of the anti-sculpted zealots in the wildlands outside the Spire — who are capable of vaporizing an entire squadron of sculpted in an instant — the Spire is probably a godsend; in an earlier issue, another sculpted described choosing the city’s safety as the “lesser of two evils.” Does that mean that the Spire represents progress, that the Marchioness’ particular brand of bigotry is somehow “better” than the zealots’, that it’s a necessary step in achieving equality? One could probably make an argument supporting that point if they were so inclined, perhaps even pointing to Meera as an example of things getting better with each progressive generation, but there’s one powerful piece of evidence against it: the Baroness.

Despite being Meera’s sister, the Baroness’ social consciousness has actually regressed — even the Marchioness finds her views on the sculpted repugnant. While their parents’ phony, forced tolerance taught Meera the real thing, it only taught the Baroness that sculpted can be used as tools, dehumanizing them to the point where she has no problem using and discarding them as if they were literal objects and nothing more. There will be no evolution for the Spire without equality, and half-measures aren’t going to cut it.

Gargboss thinks he has Pug’s best interests at heart, and at least in this particular situation he actually might — following Shå and chasing serial killers will no doubt just end up hurting him — but in a way he’s bought into the Spire’s prejudice just as much as the Baroness has. Gargboss doesn’t see a way for any of his kind to ever be anything other than messengers, no matter what kind of aspirations they may have (such as Pug’s desire to work with Shå). He feels as if his people can do nothing but pass on messages, that they aren’t meant to have dreams or opinions of their own. It’s heartbreaking, and it’s without a doubt a consequence living an entire lifetime under the oppression of the Spire. He’s learned what his people are and aren’t “allowed” to do, and he’s passing that thinking onto the next generation instead of inspiring them to rise up. Maybe that’s self-preservation at play, but it’s still a crying shame.

Thus, The Spire continues to be a powerful exploration of oppression and the way it affects not just this fictional world, but our own as well (just look at some of the stuff I’ve written and try to tell me it doesn’t apply to the United States). “Othering” is just as dangerous as outright hatred, and I love seeing this idea explored, especially in a world as rich and fascinating as that of The Spire. Patrick, what’s your take on all this? Also: would you care to expand upon the art of Stokley and colorist André May? I can’t stop drooling over May’s pastel backgrounds and Stokley’s designs. Seriously, the new villain and the way they turn into a straight-up blur when they attack?  So cool.

Patrick: Oh, that assassin dude is pretty cool — and leads Pug on some impressively staged chases throughout the Spire — but I don’t think anything tops the image of the advancing war party on the final page. 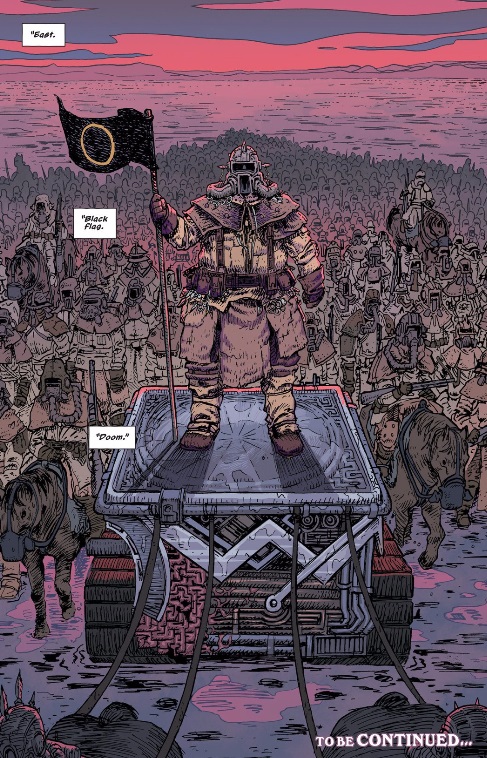 They’re so imposing! It’s like a cross between Star Wars and Mad Max, but with a little more ornate alien weirdness. That’s where Stokley’s meticulous detailing pays off hugely: the front grill of the chariot the leader is riding is at once arabesque and grotesque – a perfect visual marriage of biology and technology without being overly literal about either. Their reveal is also that much more effective because of how the issue is paced. All of the action (the fighting, the chasing) takes place in the first half of the issue, leaving plenty of space to decompress and try to deal with the racial / socio-economic issues of the Spire. And while that makes for engrossing, thought-provoking reading, it’s not going to elicit a gasp from the audience. “East. Black Flag. Doom.” on the other hand? That’s almost like those pent up tensions blowing up all at once. Whoever this invading force is, it’s likely that they’re either an extension of, or a reaction to, the racial politics of the Spire.

And you know what? I think those tensions might be just as complicated as Spencer was suggesting, drawing a clear parallel to American racial politics. One of the things that struck me as particularly strange was the way Shå knowingly took advantage of her intimate knowledge of Medusi biology in order to defeat one in battle. That, in and of itself, is understandable: in a fight, you use whatever advantage you can take. But then one of them tells her that she’s been determined innocent because she was able to win this little fist-fight, at which point she says more to herself than anyone else: “three bloody cheers for ridiculous cultural codes.” Maybe this is just a laugh-line, but it does suggest that even our sculpted-lesbian-hero-dating-a-human-woman has some of her own hang-ups about the differences between the various peoples and cultures in the world of the Spire. “Othering” isn’t something that just comes from the humans — it’s part of the culture of this world.

Spencer also prompted me to talk a little more about the artwork, and I am happy to oblige! Every issue of The Spire is filled with impressive character designs and at least a spread or two where the panels are arranged in a way that reinforces the structure of the Spire itself. This issue is no different in that regard — and Pug chasing the Soulbreaker throughout the Spire’s infrastructure is a pretty bitchin’ example of this — but I’m actually most impressed by some of the restraint shown in this issue. My eyes tend to get winded whenever Pug is on the page – that little bastard doesn’t know how to shut up. (Letterer Steve Wands is so fucking expressive and illuminating with the way he varies fonts, sizes and colors, but Pug’s poorly punctuated, all lower-case speech is a chore to read. I know that’s the point — he’s supposed to be annoying — but I end up skipping about 75% of what Pug says.) Stokley actually gets a chance to relay Pug’s disappointment in this issue without Wand or Spurrier getting in the way.

It’s actually a great scene for both characters. Previously, we’ve seen Shå thoughtlessly slap Pug in the back of the head for basically no reason, but that’s small potatoes to what she does here. She rips the cardboard deputy badge from Pug’s chest, which only reinforces the mockery he got for it in the previous issue. She’s totally betraying her downtrodden friend here, and aligning herself with the system that’s shitty to both of them. And this all happens wordlessly, using some inherently powerful imagery — sitting alone on the stairs — with some imagery that’s been cultivated within the series — the cardboard badge. Colorist André May gets in on the action too, subtly implying that the sun is setting outside, as the light pouring in through the window fades from orange to red and slowly disappears.

Our coverage on this series has been sorta spotty, so I’m interested to know if anyone else is reading this bad boy and what you think of it. I’m engaged — and have been from the start — but I think it may have taken me until this issue to actually start loving it. I don’t often make reading recommendations on this site, but if any of what we’ve been discussing or posting on The Spire interests you, I’d suggest giving it a good four issues before deciding if you want to continue. Me? I’m in.