Taylor: By now we all know the premise of Breaking Bad: a chemistry teacher diagnosed with lung cancer turns his skills to dealing meth and things spiral out of control from there. While this is an interesting premise, it’s not what makes the show great. What makes it great is the colossal character study it became. The show ponders why Walter White does the things he does and what drives him to do it. Naturally, his cancer diagnosis is a catalyst for much of the action Walter takes. And while his disease spurs him on to nefarious pursuits, others react to the disease more nobly. Case in point: Dr. Jane Foster aka Thor. Rather than let cancer eat away at her body and her sole like Walter, Jane uses it to motivate ever  greater and more altruistic deeds.

The Mighty Thor 1 continues where regular ol’ Thor left off. Jane Foster now carries Mjolnir, but she is also suffering from advanced breast cancer. While becoming Thor allows Jane to do things she couldn’t possibly due regularly, it means that the chemotherapy she’s undergoing isn’t helping to cure her. Despite this she still finds time to save a crashing space station — the first causality in the “War of the Realms.” While Jane is able to save all aboard, her efforts to convince the congress of realms of the danger of Malekith are less successful.

Cancer as it the forefront of this issue. The first page is devastating in its description of the treatment for the disease. 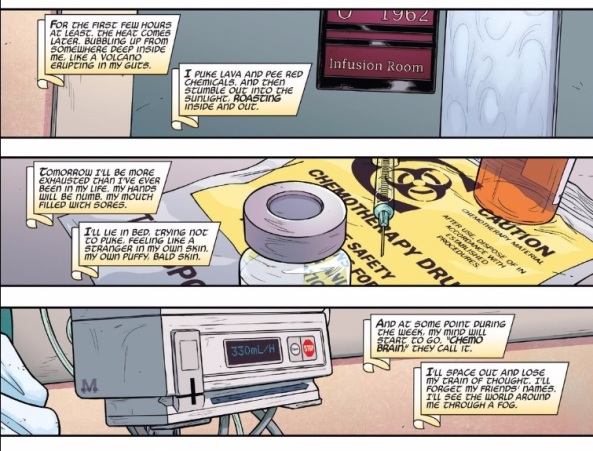 Writer Jason Aaron pulls no punches in describing what it’s like to undergo chemotherapy. It makes me understand why people say that sometimes the cure is worse than the disease. The adjectives and verbs in particular that Aaron puts into Jane’s descriptions of her treatment are visceral and hammer home the notion of how horrible she feels any time she’s not Thor. In particular, the words roasting, erupting, puke, red, puffy, and fog (okay, that’s a noun) conjure up volcanic imagery. He makes chemo sound like you’re basically living in a volcano made up of your own body which, given that you are being suffused with poison, might be damn accurate. This opening page make me appreciate Jane all the more as a hero. Not only is she putting her life in danger fighting Ice Giants, she’s enduring hell when she’s not. That’s a damn hard life and the strength it must take Jane to endure it is truly heroic.

This brings up something about Jane’s character that makes her extremely likable. Unlike Walter White who’s cancer festers into his very being, Jane essentially stays the same optimistic and hopeful person she was before her illness. I see glimpses of this in her enduring strength against chemotherapy, but I also see it in how she still takes pleasure in the little things. 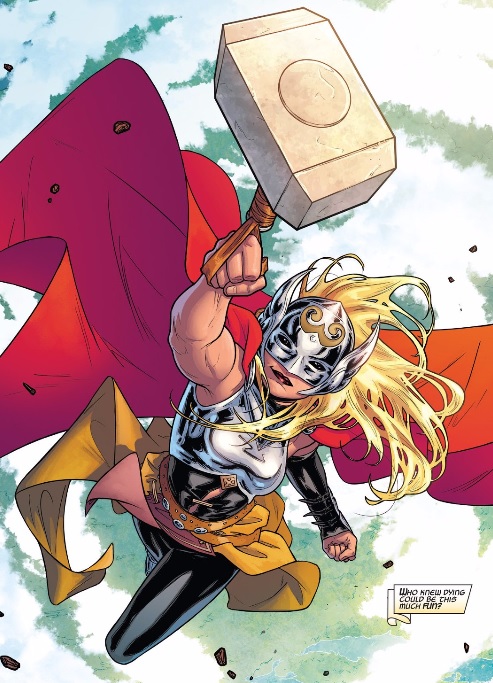 Okay, so maybe not the little things. But Jane still loves being Thor, and who wouldn’t? You’re a god who can fly around outer-space, bash evildoers, and generally do things  most humans only dream about. It’s this enduring buoyancy of hers that’s one of her best traits. Jane could easily be bogged down by her cancer and succumb to the chemo in her veins but she doesomethingsn’t. More, she’s still taking pleasure in life. That’s a kind of demeanor that speaks of resilience and is one I’m happy to see in a hero.

I would be remiss to mention the artwork of Russell Dauterman, who once again checks in with what has become consistent greatness. Dauterman’s attention to detail and Matthew Wilson’s coloring are always a treat and I’m so happy to see that they’re paired again on this title. Just an example of what makes the art so good comes on page 18 when Jane powers down from being Thor.

Easily noticeable is half n’ half portrait we see of Jane and Thor. This speaks not only to her dual identity, but to the differences between Jane as a regular human and Jane as a god. As a god, she’s strong, dark, and mysterious. Additionally the cape of Thor  in the background waves with a vibrant red, signaling life. The Jane side is frail and tired looking — obviously someone who is unwell. Noticeably there is no cape on this side as most of it has already dissolved as Mjolner departs. It reminds me that Jane’s time on earth is all to finite. Just like her cape, she has almost withered away. The only thing that’s the same on both sides of the panel are Jane’s eyes. Both eyes are clear, confident, and intense. Even if she isn’t Thor, Jane still is strong and determined and this shows through in her eyes no matter what form she takes.  This detail in a single panel is wonderful and rewards a close inspection, as do almost all of the panels in this issue.

Drew, what’s your take on Jane and her relationship to her illness? Do you think it would be wise for her to sit some time out to try and heal? Also Loki is lurking in the shadows now and there is still no sign of the Odinson. What will become of Midgard?

Drew: I hope to get to all of that conjecture in a moment, but I’m too intrigued by the parallels you drew to Breaking Bad to let that pass. As you suggest, there are some parallels in the situations Walter White and Jane Foster find themselves in — both cancer and their secret lives — but I think the differences are much more revealing. Jane is open about her cancer diagnosis where Walt was secretive; Jane is actively fighting it where Walt’s initial reaction was resignation; Jane sacrifices herself for others where Walt kills again and again just to survive. She’s noble where he is selfish, making her slow losing battle with cancer all the more tragic.

That turning into Thor counteracts the chemo is a brilliant detail — it makes sense that Mjolnir would protect its wielder from poison, but not necessarily their own cells. More important, though, is the situation that it puts Jane in. Every time she turns into Thor, she’s choosing the life of others over her own. It’s a slow-motion heroic sacrifice that reveals just how much Jane cares about other people. Here’s where the Breaking Bad comparisons become particularly apt; look at how Jane reacts to the news of a team of weathernats in peril:

If this were Walter White, he’d be saying “next time” to the weathernauts. Indeed, I can’t help but be reminded of the season two episode, “Phoenix,” where Walt deliberately refuses to help Jane as she’s dying. He later tries to justify his actions as “helping” Jesse, but, as with most of Walt’s actions, it’s entirely selfish. Jane, on the other hand, immediately leaps to action, even as she acknowledges that this will harm her.

And Aaron makes sure that we understand exactly how much it will harm her. We spend four pages with Jane in the chemo ward, explaining everything from the spread of her cancer to the excruciating sickness that her treatment brings. Rendering today’s dosage useless is not a decision Jane takes lightly, which makes her decision all the more selfless. The prospect of a war between the realms doesn’t bode well for the universe’s need of Thor — Jane may be missing more than a few treatments as this war begins in earnest.

Remarkably, for as much as this issue spends focusing on Jane’s mortality, there’s actually a ton of fun to be had here, too. Taylor is right to praise the beauty and cleverness of Dauterman’s work, but I’m just as enamored of the dynamism and energy. The spread of dismembered light elves floating through space is the first show-stopper, but for a less gruesome sequence, you can’t beat Thor single-handedly stopping a crashing satellite. 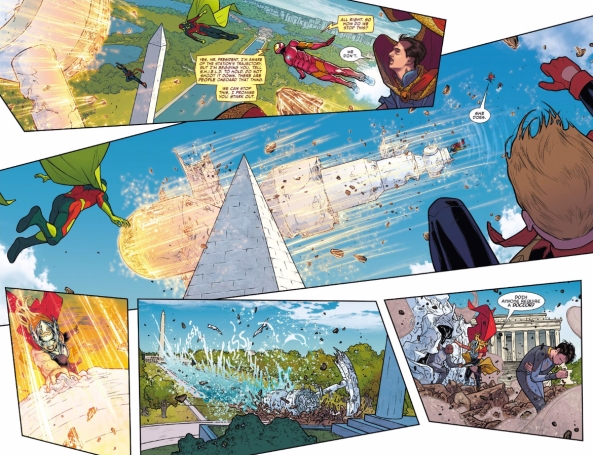 Everything is working here, from Dauterman’s kinetic layout to the water-splash sound effects to Wilson’s gorgeous colors. The cherry on top is Doctor Strange admitting that Thor’s already got this one, guys. There’s no more badass introduction than solving a problem before the Avengers have a chance to.

I had almost as much fun with the meeting of the Dark Council. Aaron’s work with Thor has always featured some deliciously over-the-top villains, but this issue finds almost all of them together, conspiring in a cabal of pure evil. Malekith and Agger are as despicable as ever, but the addition of Loki (and a few new intriguing baddies) only makes the prospect of their team up more devilish. Let the mustache-twirling begin!