Spencer: Al Ewing and Gerardo Sandoval’s New Avengers is rather explicitly a book about problem-solving; the very purpose of Sunspot’s revamped A.I.M. is to use their resources to solve crises on a global scale, and the bulk of the second issue was spent breaking down the threat of Life-Minus like a math problem in order to find a solution. It seems appropriate then that, with the concept of problem-solving having been thoroughly established, Ewing and Sandoval shift the focus of issue 3 to exploring the effectiveness (and morality) of various approaches to solving problems.

I’m sure that sounds a little vague, but just bear with me for a moment. The plot of New Avengers 3 revolves around the “Knights of the Infinite,” a group of Kree/Skrull hybrids looking to unify the scattered survivors of their empires. A prophecy has told them that, to do so, they need to find their Once and Future King, the Seeker, who, of course, seems to be A.I.M.’s very own Hulkling. This isn’t the first time something like this has happened to Teddy — in the first volume of Young Avengers the Kree and the Skrull nearly decimated NYC fighting over him, an event Ewing even references within the issue. The common thread between these two stories is the fact that Teddy has zero agency in either of them — neither the Kree, the Skrull, nor the Knights of the Infinite seem to care what Teddy wants.

That’s a very cold, clinical way to solve problems; Hulkling is treated like a resource or an asset, not a person. That kind of thinking seems par for the course when it comes to prophecies — this particular one also guarantees the death of its speaker, M’Ryn, at the hands of Moridun, the ancient wizard the Maker released in issue 1 — which, in general, cast people in roles and leave them no say in the matter. As readers, I think we’re used to these kind of prophecies elevating eager, ordinary young people to heroic status, so I appreciate the way Ewing points out that Teddy already has a life and a purpose that he’s quite happy with, thank you very much. Not only is kidnapping Teddy an unethical way to solve their problem, it’s also far from the most efficient solution; a boy with a life of his own and no idea of the stakes isn’t going to make the best Seeker, prophecy or not.

I’ll give the Knights a tiny bit of credit, though; at least they originally intended to talk to Teddy, and only resorted to kidnapping when Pod fired on them first. That’s certainly a poor way to handle the problem of the Knights’ sudden arrival, but Pod’s also dealing with a few extenuating circumstances (which we’ll discuss in a bit). On the whole, A.I.M.’s problem-solving process is the complete opposite of our alien antagonists’. While the issue ends before we get to see how the New Avengers tackle their primary dilemma — rescuing Hulkling — Ewing does give us the chance to observe their approaches to a few smaller issues. First up is Power Man’s objection to Wiccan’s codename.

I think there’s some really clever character work here — Power Man is a spiritual dude, and therefore sensitive to ideas of faith and belief, while Billy is a lapsed Jew, a future deity, and a wielder of magical abilities, and therefore much more likely to mix-and-match beliefs to form a new identity without having a full understanding of their impact. What impresses me more, though, is the mature discussion here. Victor has a problem with Billy’s codename, but instead of stewing about it, just approaches him and opens a dialogue, and reasons with him without shouting or throwing out accusations. Like I said, it’s beautifully mature.

More important, though, is A.I.M.’s approach to dealing with Pod.

On the surface, Pod appears to be an eager to please robot, but A.I.M. (here represented by Dr. Toni Ho) hasn’t forgotten about Pod’s human host, Aikku Jokinen. The fact that they haven’t heard from her is a problem they intend to address; it’s a good thing they do, because it turns out she’s lonely, but would probably have never spoken up about it if not asked. This is just the latest example in what’s becoming a pattern of invested, caring leadership from Sunspot and his organization, also highlighted last issue when he knew the names of all his employees, and stretching all the way back to that moment in Avengers 11 where Bobby first showed some A.I.M. goons a little kindness and realized that they’re human too. This entire team exists because of that one moment of empathy, and it’s lead to an organization invested in caring for its members and tackling their problems in an intelligent, ethical manner.

After three issues I’m slowly getting more used to Sandoval’s highly-stylized art, but this time around there were a few strange storytelling choices that took me out of the story. 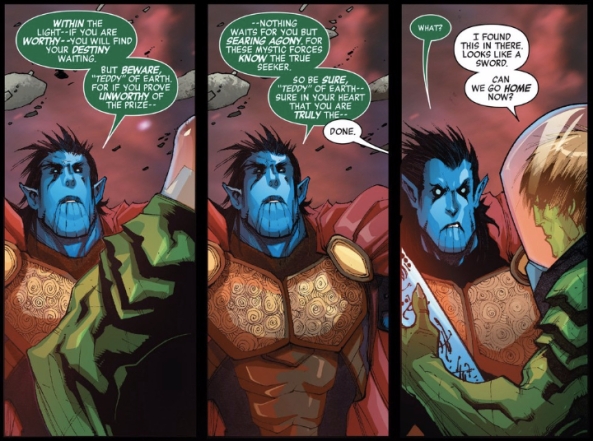 I love this joke, but the close-up shots seem to work against the humor, especially in the first panel, where we see so little of Teddy that it’s hard to tell what he’s actually doing. If the camera backed up a bit and we could actually see Teddy leave the scene and return, I think the joke would be a lot clearer, and thus land a lot better.

Why is Hawkeye in silhouette when Sunspot and Songbird aren’t? Unless this is some sort of thematic foreshadowing, it seems like an arbitrary, distracting decision. There’s likewise a panel a few pages earlier where Sandoval depicts Power Man in silhouette but leaves his glasses and mouth filled in — I think it’s supposed to look cool, but just ends up looking a bit goofy.

Still, those strange moments aside, I had a lot of fun with this issue, and I appreciate how Ewing continues to expand upon New Avengers‘ themes while also paying more attention to its characters as well. Patrick, what’s your take on this one?

Patrick: I’ve got some of the same problems you do with Sandoval’s artwork. It seems like an uncomfortable marriage of Mike Deodato and Ryan Stegman – not quite real enough to be satisfying realism and not quite cartoony to be a satisfying cartoon. I don’t really want to harp on it, though, because the man’s ability to tell visual stories in interesting ways more than makes up for his muddled execution of individual panels. Spencer already pulled two quick storybeats from my favorite chunk of the issue, but I wanted to really dig in to some of these smaller “problems” this issue address.

And actually, that’s a fun way to look at Ewing and Sandoval’s approach to telling this story – as a series of problems to be solved. Spencer summed it up pretty well above: this story is about a group of aliens testing to see if Teddy is their leader (or savior or whatever). That’s relatively simple, but most of the mileage we’re going to get out of this story depends on (a) our relationship to the mythology that supports the story; (b) our personal relationship to the characters in the story; and (c) our affinity for the relationships between the characters.

I grumble about alien prophecies and going to different planets more frequently than most of my cohort here at Retcon Punch, but I just can’t help but feel less connected to a story whose setting is so explicitly not on Earth (or at least rooted in Earth-like cultures and environments). I immediately — and involuntarily — start to check out when the issue opens in a castle at “the far edge of the Andromeda Galaxy.” There’s also some infuriatingly vague language on that first page. Lan-Zarr (the less said about that name, the better) says “It’s time. It must be time.” and M’ryn (again: ugh) replies with “… Not yet.” Right out the gate, it’s looking like a cold open for a crummy TV show that can’t quite figure out how to tease it’s own mythology without giving its secrets away. But Ewing is a much better storyteller than that as he lays out the identities of the speakers as well as some details of their prophecy and the consequences of that prophecy not being fulfilled. Further, Ewing and Sandoval fold in Moridun, who has transformed into a Cthulhu-esque monster. On his own, Moridun is a confoundingly weird presence, but our previous experience with him in issues 1 and 2, actually serves to familiarize this Kree/Skrull throne room.

That addresses my point (a) – we’re all comfortable with the mythology. Now let’s get on to the real magic of the issue: the characters. Calling back to the (possibly overwhelming) map of Avengers Island from issue 1, Ewing and Sandoval start a series of short stories, pointing out the location of each story on the map.

You know, I called it a series of stories, but I don’t know if that’s totally accurate. A series implies that there’s a specific order: first one, then the next, then the next. I’m not convinced there’s a wrong order in which to read these stories. We continue in this format — one large, spread-spanning image in the background and three single-strip stories on top of it — for six pages. The first two pairs of pages have the map of the island on the left and the story on the right, but the final pair inverts this relationship and replaces the island, and the cool blues and greens associated with it, with the hot reds and oranges of the Skrull ship. I just love that it’s such a surprising and intuitive pattern that Sandoval is able to undermine it by the third iteration to huge effect. Those last panels find each of those mini-stories coming to a sudden stop with a unifying SHA-WHOOM.

It’s a wonderful way to flesh out these characters and the conflicts and relationships between them. It’s fresh and efficient and confidently has me invested in my points (b) and (c) above.

So, yeah: I’m totally psyched to watching Space Hulkling and More-Sensitively-Named-Wiccan battle a Fifth-Dimension-Squid-God with a legendary Skrull-Kree sword. Getting me there is no small feat.