Spencer: Godzilla in Hell is one of the most unusual series I’ve had the pleasure of reading in quite a while. There’s little in terms of backstory or continuity between issues, and almost no dialogue or copy of any kind, making each issue a spotlight for the artist and their take on Godzilla’s afterlife. About the only thing tying each story together is the idea that, even in Hell, Godzilla is nigh unstoppable, tearing through every challenge Hell can throw his way through sheer stubborn force of will alone. It only makes sense, then, that Godzilla in Hell‘s conclusion would turn even this trope on its head, creating a scenario where Godzilla’s only chance at victory is to surrender.

Much like the first, this issue opens with Godzilla already wandering aimlessly in Hell, with no real indication of how he got there or whether this is related in any way to the stories we read in the previous four. Dave Wachter — who handles story, art, and colors — instead devotes the first act to establishing the horrors of Hell, which under Wachter’s pen is a mercurial domain that will take on whatever shape is necessary to screw over its inhabitants. In the first few pages it’s Wachter’s colors which best display this, showing how Hell can shift from a frigid wasteland to a molten river at the slightest whim.

The contrast in color here is a terrific way to display the sheer range of threats Hell can throw Godzilla’s way, and I love the fact that these two incompatible environments can exist side-by-side. Hell follows no rules except one: whatever form it takes will be as miserable as possible.

It’s a theme that continues throughout the rest of Godzilla’s sojourn; he next falls on a pit of sharp rocks before being accosted by a swarm of tiny red monsters. This is where the futility of Godzilla trying to fight back first comes into play; the creatures are too small for Godzilla to attack physically, and when he tries to blast them with his atomic breath, he comes up short.

I couldn’t be more impressed by the range of emotion Wachter manages to bring out of Godzilla, be it his humiliation here or his resignation later in the issue as he seemingly surrenders to these creatures.

It’s a bit unsettling to think of Godzilla — especially the Godzilla we’ve seen throughout this series — surrendering, but in Hell Wachter has created an environment that seemingly only exists to confound Godzilla’s every attempt to fight it. Godzilla eventually finds Hell’s exit, but the path keeps shifting and collapsing beneath his feet, and he has no way to combat the behemoth that guards it. With seemingly no other options, Godzilla surrenders and allows himself to be eaten — down to the bone! — by the tiny red creatures.

But it turns out this isn’t Godzilla giving up — this is Godzilla shifting his strategy in the face of an insurmountable obstacle. After being eaten, Godzilla is able to take control of the red creatures and reconstitute himself, concentrate and amplify his power through the creatures, and destroy the behemoth guardian and the mountain that so confounded him. I can’t pretend to completely understand the actual, literal logistics of this (Mark, any ideas?), but I love the idea behind it, the idea that Godzilla just couldn’t continue to rampage through Hell unabated as he’d done in prior issues. To escape, he had to grow and change.

On the final page, as Godzilla escapes Hell and emerges victorious from the ocean, Wachter includes a quote from the Buddah: “It is better to conquer yourself than to win a thousand battles. Then the victory is yours. It cannot be taken from you, not by angels or demons, Heaven or Hell.” Outside of the odd sound effect here or there, this is the issue’s only copy, driving home its importance as the story’s central theme. Godzilla can accomplish a lot by relying on his power, but his power can also fail him; it can be stolen, tampered with, or subverted, as his journey through Hell has just proven. By being clever and overcoming this trickier conflict, though, Godzilla has learned problem-solving skills that will be useful to him no matter what situation he finds himself in. If Godzilla can escape Hell, Godzilla can do anything.

I’ve gotta admit, typing all this out feels a bit silly at times, and that’s coming from a guy who generally writes over 4,000 words a week about superheroes. But I think that’s the beauty of Godzilla in Hell: it takes a totally bonkers concept and treats it with the utmost seriousness, treating the readers to both the insane spectacle of a radioactive monster battling his way through Hell and some legitimate characterization and pathos. Hell, even if the story doesn’t work for you, there’s still the art, which has more than enough to appreciate on a technical level alone. I feel like this series shouldn’t work and I’m surprised I like it so much, but man, it does, and I do, and I couldn’t be happier about that.

Mark, how about you? What did you take away from Godzilla in Hell? And what series do you think we’ll see next? Godzilla in Purgatory, maybe? That’s a Lost crossover, right?

Mark: This is the first issue of Godzilla in Hell that I’ve read, and now I’ve got to go back and read them all. What the hell is going on in this comic and why does it work so well? To start, the issue is beautiful. The first two panels are wide views of Godzilla trudging his way through a bleak frozen tundra: 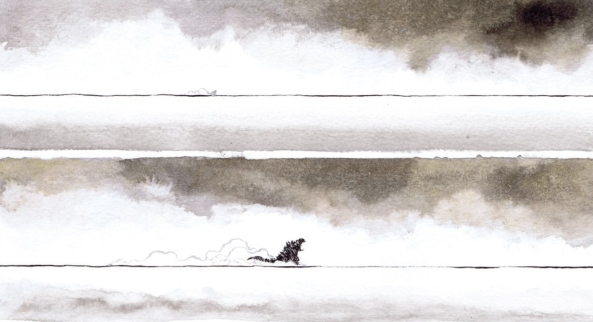 It’s gorgeous, sets a tone for the rest of the issue, and it’s also completely bonkers that a Godzilla comic should feature some of the most stunning art in comics for the week. And as a fan of Lovecraftian Great Old Ones, I appreciate that the gatekeeper of Hell is a Cthulhu-esque octopus monster. 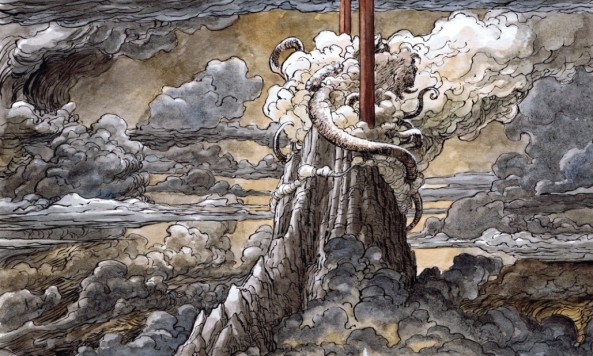 How much did I love this issue? As a thought exercise, remove Godzilla from the issue and replace him with a human lone wanderer. It’d be a lot easier to sell this story as a serious meditation on life, death, and personal strength. But somehow everything works despite it starring fucking Godzilla.

I’m not sure I can assign any sort of logic to the events here. The whole thing has a dream-like quality, and while I’m sure Wachter can probably explain the mechanics of the red bat creatures eating Godzilla and then forming a new, super Godzilla, I don’t think it’s necessary. I take the issue to be like a tone poem. It’s meant to evoke the feelings and emotions of the Buddha quote without necessarily following a strict logic.

Sign me up for wherever Godzilla ends up next!

2 comments on “Godzilla in Hell 5”