Michael: With the countless stories we have read or watched we have (most likely) seen the same number of finales. We’ve seen finales we’ve loved, ones that are easily forgettable and, of course, the ones that the general public can’t ever seem to forgive. We are all our own experts on the “art of the finale.” Heath Corson and Gustavo Duarte treat their Bizarro finale with the same unique and fun approach that they’ve taken with the series thus far, while still playing to the finale tropes we recognize.

Jimmy and Bizarro have broken up their bromance. Jimmy is near-death in the desert and Bizarro is sad-sacking it in Metropolis. Both Jimmy and Bizarro are “rescued” by an outside force that will bring them back together: The Tuts and Superman, respectively. After a pep talk from Supes, Bizarro knows that he has to rescue his pal Jimmy from the chicken King Tut and his now super villain-ish daughter. Bizarro fights the Tuts and dispels their animosity (for now) with the help of the cast of characters from the past five issues. Jimmy apologizes, Bizarro forgives him and we get a comedic whiff of the potential for a future comedic outing of this wacky odd couple. 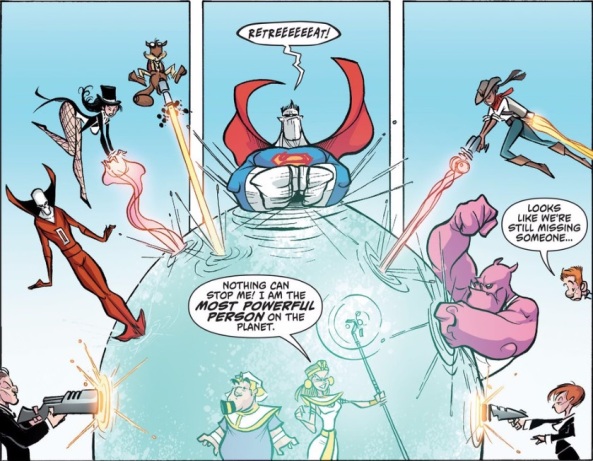 In terms of finales, I don’t think a series like Bizarro had a high chance of failure in my eyes. It’s a clever and self-aware series that has never pretended to take itself seriously (and why would it?). In a way, comedic finales are easier to do than dramatic ones because the stakes aren’t typically as high. Comedy is in no way, shape or form an easy art of course, but Corson and Duarte just hit all the right notes for me. I loved that they played up the trope of “all of my new friends come to my rescue” at the climax of Bizarro 6, I just loved it. In a book where Corson has thrown all sorts of different concepts at us it comes as no surprise that they’d all mish-mash together at the mini-series’ conclusion. Deadman, Chastity Hex, the secret agents, Kilowog’s distant cousin, Zatanna and of course Colin come to Bizarro’s aid because why the hell not? None of them overshadowed our protagonists either – though I would’ve loved to see Colin put on a Green Lantern ring.

Bizarro 6 continues something that I’ve found continuously impressive about this mini-series: the utilization of guest artists for beautiful splash pages. In the course of a comic writer’s run on a particular book, they often find themselves working with more than one artist. The artist might drop off the book or be behind on upcoming issues so another writer must fill in their shoes. What I like about Bizarro (and what I assume I will like about Max Landis’ Superman: American Alien) is the intentional planning and choosing of different artists for different issues. Gustavo Duarte has brought consistent quality to Bizarro that is 100% reflective of Corson’s script and should be commended for that. Until I read Bizarro, however, I don’t think I had considered the idea of the “guest artist page,” an idea that is beautiful, wonderful and unique. Even though the particular artist is listed in the (hilarious) credits, that guest artist page always jump out at you from almost nowhere. 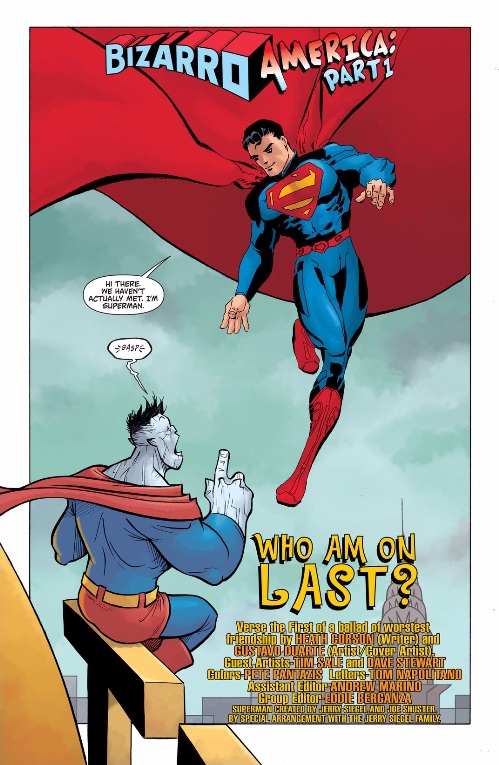 Bizarro 6 was graced with the always delightful Tim Sale, whose previous Metropolis work includes Superman For All Seasons. Clark Kent has popped up here and there in the book so far but we haven’t seen him in the cape and boots. Sale has Superman descend from above, endless red cape flowing off of the top of the page, ready to lend a helping hand to Bizarro. Corson’s running joke throughout the series was that Bizarro was Superman’s brother, so it’s perfectly fitting that Superman (somewhat reluctantly?) offers his “brother” some guidance. I think a Superman/Bizarro scene is pretty indicative of a creator’s handle on Superman, and Corson shows us the gentle, kinds Superman that we/Bizarro needs.

I think that the comics medium needs more books like Bizarro – fun, silly and bravely non-cynical. What do you think Spencer? Did you think that Bizarro 6 wrapped up the mini-series appropriately? Do you want to see more Bizarro/Jimmy tales?

Spencer: I would absolutely be up for that, Michael. In fact, I’ll take it a step further: I’d love to see Corson and Duarte tackle a straight-up Superman story any time. Maybe Superman as a character just works better in guest-spots in general — creators can just let him be the perfect, inspiring superhero we all know he is instead of worrying about challenging him or making him “relatable” — but I still love Corson and Duarte’s take on the Man of Steel. 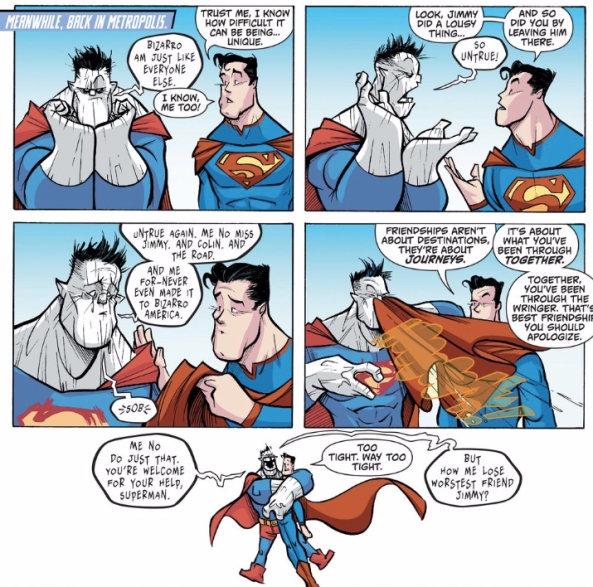 Superman is clearly at least a little annoyed by Bizarro — how could anyone not be? — but he does a phenomenal job restraining it. Instead, he listens to Bizarro’s problems, offers him useful advice, never condescends to him, and plainly — but not harshly — points out what he’s done wrong and what he needs to do to correct it. It’s a phenomenal display of Superman’s empathy, selflessness, and restraint, and we could always use more of that in the New 52 (or the DC You?).

Despite all his backwards-ness, many of those same traits are present in Bizarro as well. I enjoy how Corson portrays Bizarro as a noble soul, filled with good intentions but forever thwarted by his own backwards nature. In many ways, Bizarro has been a celebration of his simply trying to do what’s right, and the “Bizarro League’s” return highlights the victories Bizarro has won, in his own way, throughout his journey. The fact that he’s won over all these disparate characters shows some terrific growth from the bumbling hero, and their friendship is a greater reward than visiting Canada could have ever been.

Corson’s sympathetic take on his lead character extends to the villains as well. One of the few weak moments in Bizarro was King Tut’s daughter’s transformation into a supervillain, which seemed to go against all the priorities and goals she so proudly proclaimed earlier in the issue. Issue 6 doesn’t necessarily fix that moment, but it does acknowledge the ridiculousness of the entire situation.

It was King Tut’s example that first inched Regina towards a life of crime, but after living that life and dealing with the consequences, he realizes it’s nothing he wants or needs; in a way it’s another victory for Bizarro, with his hypnotism serving as a strange, but oddly effective, rehabilitation program. Regina’s rehabilitation doesn’t take quite as well; she still has a small desire to kill Bizarro even after he’s given her everything she needs to start a new life. I have to wonder whether this counts more as a failure for Bizarro or some sort of moral defect within Regina, but either way, I appreciate that Corson (and, thus, Bizarro as well) is more interested in trying to save and reform Regina than punishing her. That compassion permeates Bizarro 6, and the issue is all the better for it.

Like Michael, I dig Bizarro‘s use of guest artists (although it is a bit jarring to see Tim Sale draw Superman in his New 52 duds), but I want to make sure to give regular artist Gustavo Duarte the praise and attention he deserves as well. Duarte’s work is a perfect fit for Bizarro‘s tone, especially when it comes to the character designs — just the sight of Jimmy, with his giant nose and ears, makes me laugh every time he shows up. But while I don’t want to take Duarte’s comedic gifts for granted, I think this month I’m even more impressed by how he handles drama. Take, for example, the following panel, which brings the issue’s emotional core — Bizarro and Jimmy’s fractured friendship — to a head.

This is a wide, vertical panel spanning the entire page, and Jimmy and Bizarro are positioned at opposite ends, as far apart from each other as is physically possible; there’s even that podium wedged between them, as if to separate the pair even further. This panel is a perfect representation of the distance that has grown between Jimmy and Bizarro. It doesn’t even matter that Bizarro has already forgiven Jimmy and immediately embraces him in the next panel — for this one moment, forever frozen in time thanks to the medium of comics, the gap between them seemed almost insurmountable. That’s some powerful staging.

So yeah, it’s safe to say that I’m down for another mini featuring Jimmy and Bizarro. I think the Jimmy/Bizarro dynamic has room for plenty more adventures without feeling derivative, and Corson and Duarte have built quite a bench of reoccurring characters that I’d love to see again. If nothing else, I’d better get to see Colin as a Green Lantern at some point. With a story that bonkers, a tease just isn’t enough.