Spencer: “Redemption” can be an awfully selfish pursuit if the person seeking redemption is more interested in clearing their own name and conscience than about alleviating the pain they’ve caused others. I certainly wouldn’t accuse Damian Wayne of being selfish, but he is young, and still learning just what, exactly, redemption and forgiveness are all about. In Robin: Son of Batman 6, Patrick Gleason uses the events of the past five issues to teach Damian an entirely new definition of redemption, one focused more on others than himself.

This issue mainly serves as an epilogue for the “Year of Blood” arc, focused more on resolving the emotional fallout of Robin and NoBody’s missions and Talia’s resurrection than any sort of action beats. All three of those plot points are thematically linked by the ideas of forgiveness and redemption, which is something both Damian and Talia seek. Of course, it takes a while to steer the conversation to that point — Talia is still worked up about the Lu’un Darga, but Damian pushes that plot aside with a piercing, devastating question.

I love Gleason’s choice to have this conversation while Damian is in the bath. It strips away the pretenses of superhero and supervillain and leaves only mother and son, and presents Damian at his most vulnerable both physically and emotionally. Talia doesn’t really have a good answer to Damian’s question, but with the worst parts of her personality somehow exorcised and enclosed within a black pearl, she too is looking for forgiveness, a second chance from her son. Understandably, Damian’s not ready to give it.

Between Talia’s return and the revelation that his “Year of Atonement” has only resulted in the release of the evil Lu’un Darga, Damian’s feeling pretty down on himself, and Maya’s attempts to lift his spirits only lead to his trying to push her away. Turns out that all comes down to guilt — the only way Damian knew how to “fix” his past mistakes was in a completely literal fashion, returning the items he stole as Damian al Ghul, but not only has the Lu’un Darga proven that method of redemption invalid, but it was never an option in the first place when it came to NoBody.

This could easily be the most mature sentiment of Damian’s young life. Up until now, Damian has been thinking in moral black-and-whites, mainly adhering to his father’s “no-kill” rule because he’d been taught that “killing is wrong” but not fully understanding why it’s wrong. It takes empathy on Damian’s part for him to realize that killing someone is denying them the same chances at redemption that he’s enjoyed, and it takes maturity for him to realize that some of his mistakes can’t be “fixed” or forgotten, only forgiven.

Blessedly, Maya grants Damian that forgiveness, and reveals how his quest for redemption has inspired her as well. It’s only Maya’s forgiveness that gives Damian the clarity to realize that he has to give Talia her own shot at redemption (although he, understandably, still wants nothing to do with her). That’s just one of many moments throughout the issue where Gleason promotes the “pay it forward” power of forgiveness. Damian has only become the hero he is now because of forgiveness from Bruce Wayne and Dick Grayson — and even from Goliath in the flashback that opens the issue — and Maya’s forgiveness once again allows him to move forward and find a new path in his heroic career.

It seems most appropriate, then, that Damian’s new path is as a figure of redemption. 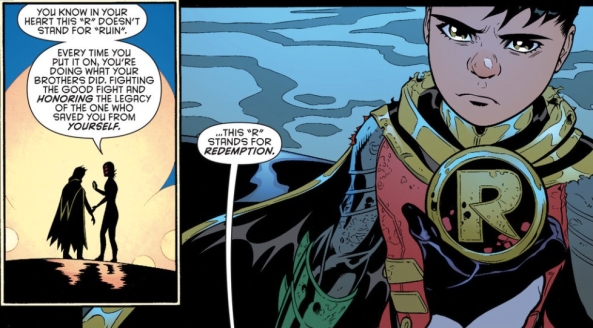 Damian’s been using the mantle of Robin as a way to repent for his past sins. While I’m sure we’ll continue to see those sins pop up here and there (they’re an important part of Damian’s character), that leg of his journey has pretty much come to an end. Now it’s Damian’s turn to pay forward the kindness and forgiveness he’s been shown. Robin can be more than just a kid who punches muggers in the face — he can be a symbol of hope and redemption for the people of Gotham in a way perhaps even his father can’t. Robin was always designed to be a light to Batman’s darkness, but this may be the first time Damian’s been able to fulfill that part of the job, and I think that’s going to be a fascinating new direction to explore (especially when Damian’s still such a surly kid on the surface).

This issue really does feel like the end of a chapter in Damian’s life, even down to the shifting of his supporting cast and his return to Gotham City. While this is clearly motivated, at least in part, by the upcoming “Robin War” crossover, that doesn’t mean it’s bad timing; this is the perfect opportunity for Gleason to display Damian’s growth by throwing him together with characters he hasn’t interacted with in a while. I do look forward to seeing Maya and Goliath and even Talia again, but in the meantime, I couldn’t be happier to have this kid back in Gotham. Should be a blast.

Mark, the emotions of this issue hit me hard, especially that opening flashback featuring Damian and Goliath’s first meeting, which could stand alone as a powerful story all on its own; was it as powerful for you as it was for me? Do you think Damian’s earned his new role? Any thoughts on the art that I may have neglected to cover? And what about Talia’s black pearl: is it a smart way to salvage Talia as a character, or a cheap cop-out to avoid addressing the full monstrosity of her role in Damian’s death?

Mark: I don’t know that I’d call Talia’s black pearl a cheap cop-out, but it’s definitely an annoying cop-out. Especially if she’s going to fade into the background as Damian returns to Gotham City. This is an issue that speaks heavily to the idea of personal redemption and forgiveness, so what better time to have Damian confront his mother over her heinous actions? That it’s hand-waved away so quickly is frustrating, and, while it’s impossible to know for certain, this seems like the last word on the issue. So, actually, I guess I talked myself around to it: the black pearl is a cheap cop-out.

There are two stand-out moments in Robin: Son of Batman 6, and you touched on both of them, Spencer. First, the opening sequence showing how Damian found Goliath really struck me. I haven’t been the biggest fan of Gleason’s take on Damian overall, but this was the perfect mix of violence and anger and, in the end, pathos. Damian is broken. The art of Gleason, Mick Gray (I think he inked these pages), and John Kalisz really shines here as well. The final three panels of Damian’s killing spree are gorgeous, with Damian being cloaked further and further in shadows as Goliath places a paw on his leg to comfort him.

Damian’s lowest moment is contrasted by the highest moment of the issue, and it’s not even something Damian himself accomplishes. Yes, Damian asking for Maya’s forgiveness is in and of itself significant growth for the character, but the most affecting thing about the exchange is Maya’s willingness to forgive him. That’s the true moment of change in Damian’s life. He opens himself up emotionally to another person, expresses true regret, and it’s not met with derision or rejection, but acceptance and love. The moment is illustrated with appropriate brilliance: 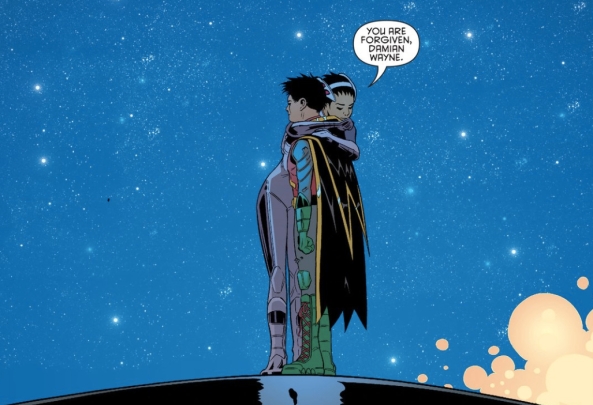 And of course Damian doesn’t hug Maya in return.

There’s no place for Goliath in Gotham (and I like that one of Damian’s concerns is that Goliath will eat Bat-Cow), but I will miss having him and Maya around. Still, it’s appropriate that they should leave our story for now since this is a new beginning for Damian. While not so dramatic a change (I’m sure Damian’s gonna continue to Damian in the future), this feels a lot like Batgirl 40 earlier this year. Damian, like Barbara Gordon, is finally shaking off the weight of the past, and can move forward with a new purpose.

Also, how’s current forget-my-past Bruce Wayne going to react when he finds out he has a son? I believe Snyder has said we shouldn’t expect to see Damian show up in Batman-proper, but someone has to address it, right?