Ryan D: The hiatus is over! Superstar creative team Brian K. Vaughn and Fiona Staples have been keeping themselves rather busy since issue 30 released a million years ago in July, hitting Comic Cons and embarking upon new series. Though Vaughn’s mini-series We Stand on Guard outsold Saga in the month of it’s debut, the Eisner-winning space opera returns with a new chapter which promises to keep returning readers satiated with its signature bend of absurdly imaginative and developed characters in an ever-expanding universe.

While the average Saga issue often spreads its focus over two or three plot threads, this issue belongs squarely to Hazel, who we find to be all grown up — four years old, in fact! Enlisted in an elementary school program at a Coalition-run detainee center for “enemy noncombatants” and enjoying what looks dangerously like a healthy, structured life, the issue takes us back to the Rebellion’s ship wherein the double-crossing and murders took place last issue. The flashback is tense as Granny Klara confronts the leftovers of the rebels, and both are ultimately seized by the “Royal Fucking Guard”, still searching for the errant Prince Robot IV. Interestingly missing from the issue are Marko, IV, The Will, Sophie, and mostly Ghüs. I am supremely interested in the status of these characters — especially The Will, who recently lost his sister, The Brand — knowing Vaughn’s tendency of letting events occur off the page or between issues (remember how Marko and IV got that killer bat-shield and sword? Nope. Conjecture).

The first page of the issue welcomed me back to Saga in wonderful fashion: 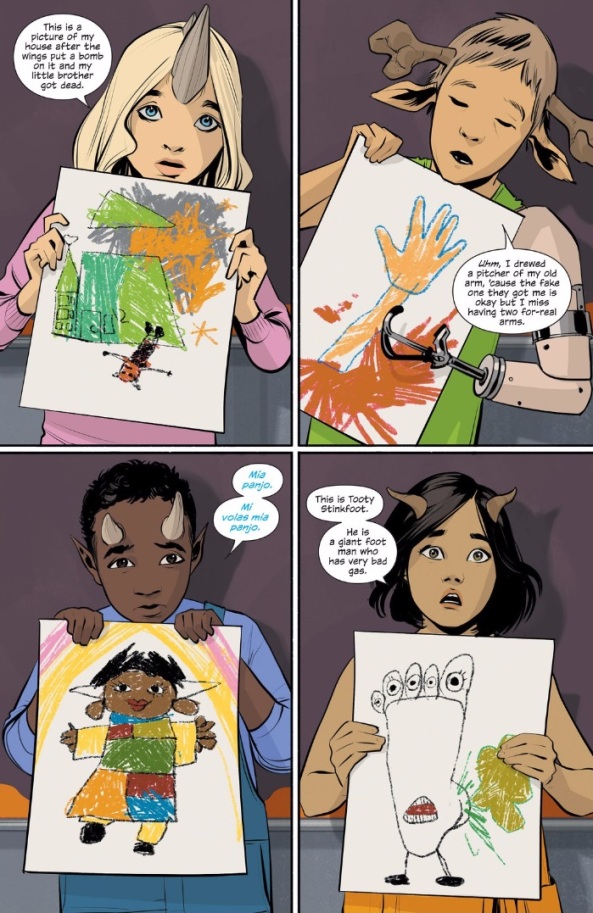 There’s an old maxim in Theatre: there’s no such thing as a small part, only small actors. The creative team lovingly applies this adage to comics in the sense that every character depicted — whether they are around for an issue or just one panel — is imbued with an uncanny amount of personality, as seen in the four children on the opening page bearing their nightmares to the world via crayon. The onus of this falls to both Vaughn and Staples. While Staples consistently brings characters of any species and sex to life through meticulous depiction of posture, angle, and facial expression, Vaughn masterfully shows his skill at finding character viewpoints. This first page is Saga in four panels: brutality and innocence cohabiting in an impartial galaxy, with humor lurking just around the corner. I am also a sucker for Ms. Noreen, who is the quintessence of a pre-school teacher and also a mantis, kind of.

As Hazel grows older and can now talk in coherent sentences and continues to develop her own persistent sense of self, the narration of the series becomes more interesting. I have always assumed that the story being told in Saga came from the mouth of an adult Hazel, but already the character is catching up quickly with that of the narrator. Hazel’s moment of reveal is beautiful:

While the repercussions for Hazel confiding her unique heritage, manifested by the combination of horns and wings, to another are as of yet unseen, her vulnerability leaps off the page. In the background, we can see the fun mural of a tree painted by the children, and it stands in parallel to the triumph that is the little girl shedding the bondage of the wrap which kept her wings hidden. This exploration of heritage, and what it means to take ownership of one’s self, is my big take-away from this issue, and though my heart leaps for Hazel, her disclosure of her true form to the teacher will surely signal the end of the peaceful hiatus which the whelp has been enjoying.

Drew! It’s good to be back with Saga. Vaughn and Staples have always been ambitious with the beginning of their next arcs. How did you find this issue? Does it signal to you that the creative team has some good stuff to bring to the table for the future of the series? And maybe you could touch on the idea of transgender in this universe, and how it fits with Hazel’s own discovery of her body?

Drew: Man, leave it to Vaughan to touch on a social issue I didn’t see coming. Saga‘s galaxy-spanning war acts as such a rich commentary both for the cold war and the current global war on terrorism (which is at least partially a symptom of the cold war) that it’s easy to forget that this series can just as readily address issues of drug use or authorial intent. I doubt transgender issues will be an ongoing subject of the series — like the casual homophobia Upsher and Doff encountered, I suspect this is more about lending this world an uncomfortably familiar social texture — but you’re absolutely right to note the parallels to Hazel’s own secrets. Hazel isn’t so self aware to acknowledge Petrichor (whose name means “the pleasant smell that frequently accompanies the first rain after a long period of warm, dry weather” and is now my new favorite word) as a direct inspiration for her own coming out, but it’s no coincidence that this moment is recorded in her story.

Of course, whatever parallels exist between Hazel and Petrichor are lost on Klara, who doesn’t even acknowledge Petrichor’s humanity. Hazel notes that Petrichor isn’t invited to any of the Wreath pot lucks, but the real clincher is Klara referring to Petrichor as “gi,” which translates to “it.” That is to say, Klara isn’t just being protective of her four-year-old granddaughter, she’s being cruel for cruelness’ sake. This is obviously not the first time Petrichor has encountered this attitude, but you can still see the sorrow in her face as Klara drags Hazel away.

But man, what a parallel this is. It was easy at the start of this series to see Hazel as a beacon for peace, a personification of the common ground between Landfall and Wreath, but Petrichor represents a very different and very real future for Hazel: someone of two groups but accepted by neither. Petrichor’s isolation here is Hazel’s own, just displaced by a few decades.

Between that bleak look into Hazel’s possible future and the apparent death of Ms. Noreen following Hazel’s big reveal (“oh, fart” indeed), this issue has a lot of down moments. There was one bright spot that had me cheering, though: the return of Izabel, whose fate was very much in question up until now. Vaughan and Staples play the hell out of that moment, keeping everyone in the dark until Izabel reveals herself.

Who even knew that she could turn into something that wasn’t glowing pink?

Oh, and speaking of surprise reveals: Klara can speak “language.” That particular reveal doesn’t get the weight it deserves — not only was Klara so desperate to lower herself to speak Landfallian, she also apparently knew it all along. It’s an interesting, revealing character moment, but it flies right by in the heat of everything that’s going on.

If these points feel a bit disconnected, it’s because, as usual, I want to talk about everything when it comes to Saga. I’m not sure if I can really predict what this arc holds for our characters (or, heck, which characters will even be featured), but I know I’m going to enjoy it. Vaughan and Staples haven’t lost a step, and this issue reminds us that they can be just as engaging with a small ensemble as they are with their whole cast.