Patrick: Why do reboots matter so much to us? The characters we’re reading about aren’t — in the strictest sense — real. The only thing that’s ever real about them are our feelings toward them. And those feelings never need to go away, even as the very qualities that made us fall in love with characters in the first place are retconned out of existence. Silver Surfer 15 tackles this notion literally, as Dawn has to chose between an idealized world based on all the wonderful things she remembers and a scary new world with limitless possibilities for change.

This issue is maybe the most Silver Surfer-y issue of Silver Surfer I’ve ever read. Norrin Radd and Dawn Greenwood are given the opportunity to remake the universe with the help of The Shaper, Glorian and Zee, a trio of demi-gods and dimensional refugees that have a… strange relationship. There’s all kinds of weird little backstabbing that goes on between the three of them, including the revelation that Zee is none other than the Icredulous Zed from issue 3. It makes for some mild intrigue, but I can’t really say that any of it matters that much to me as I read the issue. Confession: on my first read-through, I put the book down about halfway through because I didn’t care about these characters.

But perhaps we’re not meant to care about them. While they wield the very power of reality, it doesn’t really matter to Dawn and Norrin who controls this power – either way it comes down to which reality Dawn chooses anyway. That makes that drama between Zed, Glorian and The Shaper kind of background noise for what really matters, just like Secret Wars ends up being little more than background noise in the stories we’re really invested in.

Which, of course, doesn’t mean that it’s easy to ignore that background noise. Dawn and the Surfer have to do a little bit of nonsense detective work to determine that Dawn’s front gate is the Never Queen’s heart and that touching it will grant them some kind of protection from Glorian. For all of Dan Slott and Mike Allred’s insisting that Dawn’s choice is the only thing that matters, there’s a lot of emphasis on that noise. Hell, an editor’s note from Tom Brevoort even reminds us that we can get more information on this noise in Secret Wars #9 (when it finally comes out in two months).

I love Allred’s depiction of the choice between the world of Secret Wars and the world that Dawn created out of her memories. One is sprawling, cool and seemingly goes on forever. The other is smashed up into a messy ball, with an imposing Doom mask stamped on it. 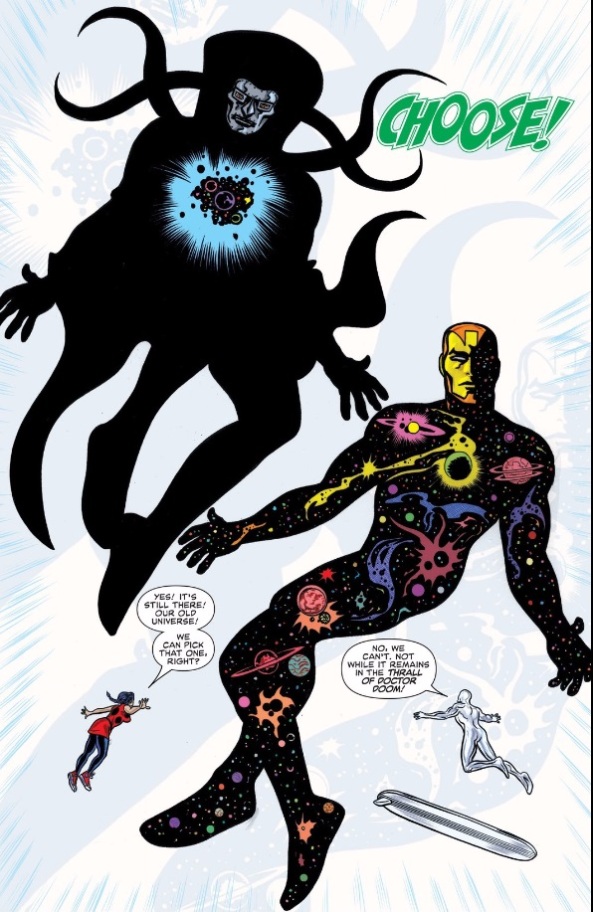 Surfer’s reaction to this choice is actually pretty damning – he says “No matter what happens, we cannot choose a universe under Doom’s control.” Within the context of this reality, he’s totally right of course, but he might also be voicing the concerns of fans that didn’t want to be locked into this nightmare-mega-world. I was one of those fans, and I remember feeling physically ill about the Game of Thrones-esque status quo that Secret Wars 2 established. But that gives way to yet another universe – both totally new and totally not new all at once.

I guess the one part of the metaphor I don’t totally understand is who the reader is supposed to be in this scenario. Are we Dawn, with the power to choose between realities, or are we Norrin, able to witness the changes in the reality without having the ability to change it. There’s a moment right at the end when dawn reaches her hand out to the Surfer and says:

“You want to see new stars, don’t you?” That’s a hard thing to deny – yes, of course I want new stories, and I want to see them from these storytellers who I know and trust.

So what do you think Spencer? Is this a specific condemnation of Secret Wars? Or an explicit endorsement of All-New All-Different? Or simply engaging in the readers’ struggle to keep it all straight in their hearts?

Spencer: Patrick, more than anything I’d say that this issue is exploring the role readers play in giving stories life. When discussing issue 14 we compared Norrin and Dawn’s mission to Marvel Editorial’s task of recreating the Marvel universe, and that’s still an apt metaphor, but as you discussed, this issue also places Norrin and Dawn in the shoes of the readers who consume Marvel stories. One way it does so is by reasserting the power the author has over a story in the first place.

The Shaper of Worlds couldn’t be a more appropriate stand-in for writers and creators, but what I find interesting is the physical transformation he’s undergone since the last issue. While still gigantic, he does seem to have shrunken in scope since the last we saw him, and he’s also losing his very form. Creating the universe is taking a lot out of him; he’s literally giving up pieces of himself to bring his vision of the universe to life. I bet there’s a lot of writers and artists who can relate to that feeling, huh?

But once the Shaper of Worlds releases his power into the universe, he loses all control over it. It’s up to Norrin and Dawn to give his creations definition and meaning, and this very much places them into the role of a reader. Here at Retcon Punch, we’re very fond of saying that the author’s intentions are irrelevant; once the story’s been told, the readers’ interpretations hold just as much weight as the author’s. The story becomes ours to use as we please, which, in a way, Dawn (unintentionally) does when she creates a second Silver Surfer. 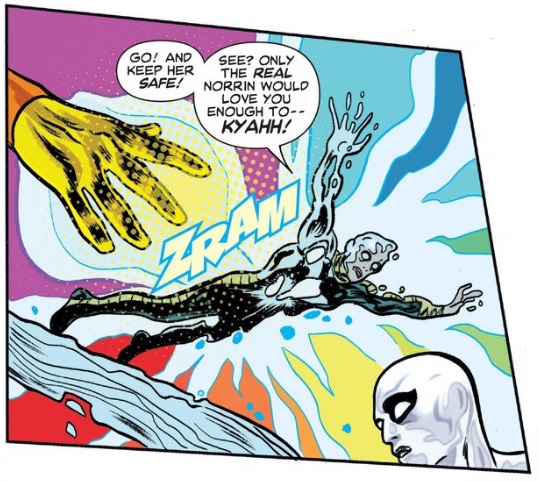 I can’t help but to see the imitation Norrin as representing fan ideas, be it our scholarly dissection of a story or fan theories or even fan fiction. These ideas, like this Norrin, don’t originate from the author, but that doesn’t mean they aren’t as “real” as anything the author comes up with. In their own way, readers have just as much control over the reality of a story as the author does, even if it’s just within their own imaginations.

In that sense, readers even have some level of control over the universe their stories are told in — which, in this case, would now be the “All-New All-Different” Marvel Universe. Maybe readers can’t dictate the official details of that initiative, but they can choose whether or not to participate in the relaunch — in a sense, they’re choosing their universe in the same way Norrin and Dawn do at the conclusion of this issue.

With that possibility in mind, I think it’s important to note that, while this issue easily could be seen as an endorsement of the post-Secret Wars “All-New All-Different” status quo, that interpretation is clearly meant to apply only to Norrin and Dawn. They’re forced to choose between the Marvel universe or a universe of their own making and enthusiastically, unequivocally choose the Marvel universe, but that doesn’t mean it’s the only option available.

When Dawn reaches out and essentially asks the readers if they want to see new stars, I don’t necessarily think that she’s giving us her role or Norrin’s role in the issue’s overarcing metaphor. Maybe that’s not the clearest storytelling, but it does allow readers to make the same choice without necessarily facing the same consequences. Dawn and Norrin can only choose one universe, one path, but as readers we can choose both if we so desire; we can embrace the unknown without giving up the stories that were once important to us. Or, if the new stories simply aren’t to our liking, we can instead pick “Glorian’s universe” and stick to the comics we’ve loved in the past. Slott just asks that we understand exactly what that means. 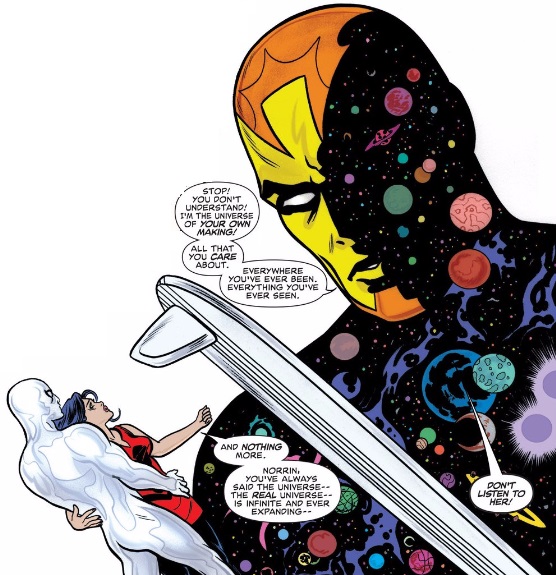 The stories we’ve loved in the past are comforting because of our familiarity and existing emotional reactions to them, but in the end that’s all they can be — by sheer definition, they can’t be new. If that’s your choice, well, the option is there, but through Dawn Greenwood, Slott and the Allreds are asking everybody reading this comic to give them a chance to continue telling them new stories, to take a risk and follow them anywhere and everywhere. “All-New All-Different” can be a scary concept, both in theory and in execution, but as Patrick pointed out, it’s a little easier to handle with creative teams we know and trust at our sides.

And let me make it clear, I absolutely trust Dan Slott and Michael and Laura Allred. I will concede that, in some ways, Silver Surfer 15 is a messier issue than usual — beyond any mental gymnastics required to understand the metaphors and metatextual elements, there’s also the Lowly Zee/Incredulous Zed, who feels like a superfluous, under-explored element who’s only really here to provide a (unnecessary) link to the series’ earlier installments in its waning moments. But for every shaky moment, there’s five more than land triumphantly. I can’t wait to see more of Norrin and Dawn’s enthusiasm for the unknown, and I can’t wait to see more of the creative, visually stunning universe the Allreds and Slott have created. I want to see new stars; let’s go anywhere and everywhere.