Patrick: The world of East of West exists in a state of ceaselessly progressing apocalypse. Jonathan Hickman and Nick Dragotta’s series is appropriately grim to match the tone of a world mired in sustained war, famine, disease and death. And while that’s all terrible, it has sort of become background noise against which millions of people still lead their lives. It takes a specific moment of invasive violence to snap readers out of their apocalypse-apathy, and issue 22 doubles down on both the specificity and the invasiveness of that violence. The result is a haunting, immediate issue that preys on our fears of being attacked when we are at our most vulnerable.

The issue tracks a single hour, from the minute a crack team of Confederate soldiers begins an assassination attempt of Mao Xiaolian, to the minute the mission concludes. Hickman and Dragotta are interested in this specific block of time and nothing else – something they broadcast right from the start of the issue. Normally, an issue of East of West begins with a credits page, followed by a white page with some text and that upside down triforce-logo, followed by a short scene and then the title page (followed by one more repetition of that white page). This issue starts with the normal hallmarks of the series — credit page, first white page — but then jumps right to the title page, with no storytelling in between. This move is all the more noticeable because it means that there are five pages at the beginning of the issue with basically no content.

So when the issue begins in earnest, the first first things that are established clear as day are time and place. Until the final page, we don’t get any copy, but Dragotta stages the first panel to clearly show that we’re in San Francisco, home of the PRA.

The whole page tracks the path of this unassuming shipping container – it flies into a shipyard, and dutifully finds its place in the stacks of equally unassuming containers. At this point, we’re witnessing something very procedural and routine. The second page continues this commitment to detailing methodology, and as an agent locates this box in the stacks and accesses it. We see the device he uses to find it, the fingerprint scanning system that grants him access, etc. The third page reveals that there are soldiers in the container, but even then, Hickman doesn’t appear concerned with their ideology, or their fears or their reason for fighting – only the border-line administrative prep-work that goes into waging war.

That’s when the clock first appears. The agent slaps it up on the screen – one hour. Dragotta and Hickman let us see it twice before starting the timer, but from that point on, we’re trapped in this horrific hour, that omnipresent clock forcing us to stay with the action.

What follows is a brutal, blow-by-blow account of this squad attacking Xiaolian’s personal guards and attempting to murder her in her bed. As thought that’s not quite an intimate enough setting for the assassination attempt, it turns out that she’s actually taking a bath – totally naked and quintessentially vulnerable. Actually, being submerged in a pool like that is such an amazingly loaded image – it calls to mind baptism, or a Mikveh or just being bathed as a child. An attack at this moment of serenity is like the ultimate violation.

It’s just a damn good thing that Xiaolian is so damned competent that, even in her ultra-vulnerable state, she’s able to kick some serious ass. Dragotta delivers a scene that carefully tracks every flip, every slash and every sword-hilt-to-the-teeth. And while Xiaolian is still struggling to gain the upper hand, the art is clear and literal. Once she takes the advantage, however, the action goes extremely stylized – a red, three-panel-by-three-panel celebration of her self-defense prowess. It’s really the only time Dragotta allows any of the action to be “cool.” 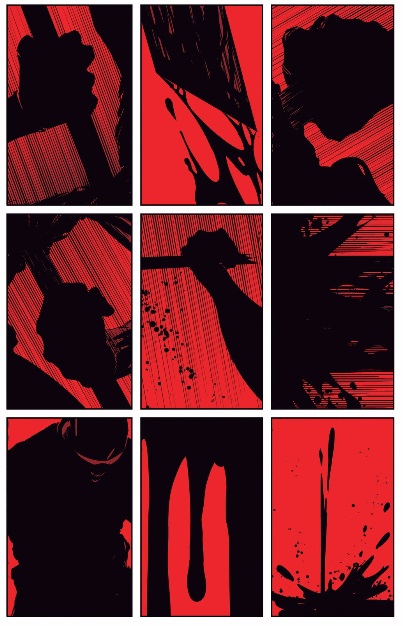 The whole thing adds up to one exhausting hour.

Taylor, what were your thoughts on this issue? There are obviously a lot of political ramifications to be explored in future issues, but I’m having a hard time seeing past the attack itself.

Taylor: The future fallout out from this issue seems to be almost an afterthought. Actually – scratch that. It is an afterthought. We only learned who was behind the attack on the very last page, and while that maybe raises questions about future issues, it really has no bearing on how I read this issue. To wit: I too can really only focus on the attack itself. All other conjecture really doesn’t seem that important to this issue.

A large part of the reason I think we can only focus on the attack itself is the obvious lack of dialogue in the issue. In a normal issue with dialogue, I find I can better examine character motives, future plans, and emotions. Here, since I’m not privy to any of that, I can only focus on the action, which really is the only part of this single facet issue. Moreover, the action only encompasses one scene. We follow the assassin team from the beginning of the issue to the end, almost like a the single track narrative I’ve seen in movies like Birdman. Again, this reduces the issue to a single element and that means I’m only focusing on one aspect of it.

Given the lack of dialogue, Dragotta has his hands full this issue since he has to carry more narrative heft with his artwork. Dragotta turns in what has become his regular greatness, and part of that is how he handles the action in the issue. There are points in this issue where Dragotta lets my mind do more of the story telling than his pen. Take for example when the Confederacy team approaches Mao’s palace. 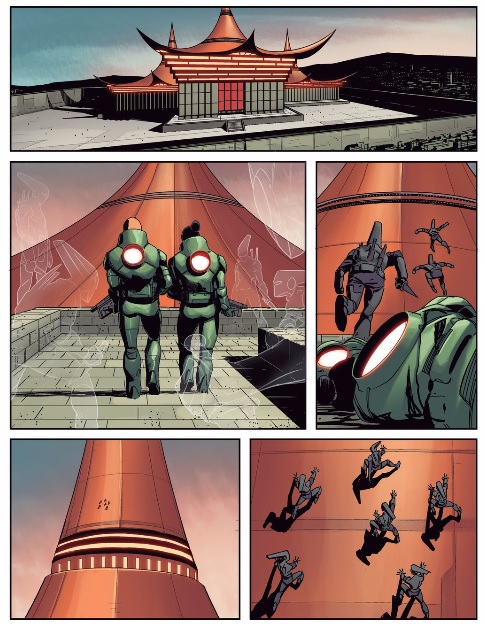 Dragotta shows two PRA soldiers on patrol, ignorant of the cloaked danger surrounding them. Instead of showing me how these unfortunate soldiers meet their fate Dragotta opts for simply showing us the aftermath of the attack. In essence, he’s trusting me with filling in the gaps about how these PRA soldiers died, rather than showing me. Ultimately this is a storytelling choice. The death of these soldiers isn’t central to the issue so why bother wasting a panel or two showing me what I already know will happen? That’s just good thought and planning put into the artwork.

Later in the issue the action slows down a bit and is more detailed oriented. When ambushed in her bath, Mao leaps into action protect herself and the would assassins aren’t prepared for the hurricane of death that is about to rain down upon them. Being unarmed, Mao has to use her hands and enemy weapons to survive, which means a particularly gruesome death for one Confederate soldier. 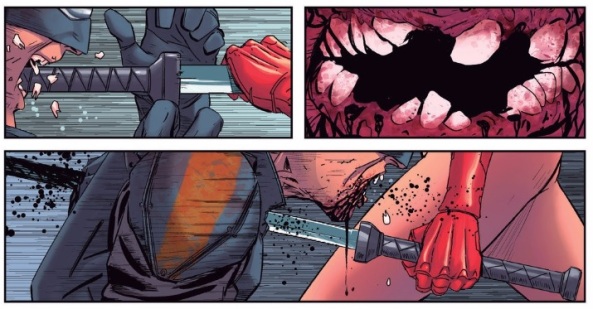 As he charges, Mao bashes her stolen sword into her assailants mouth, crushing most of his teeth. Here, Dragotta spares no expense with the detail in showing us the nature of this assassins death. It’s painful, gruesome, and bloody. This sequence is set in stark contrast against the sequence I detailed earlier and so we have to wonder why this is so. For me, this really hammers home how messy the would be assassination has become for the assailants. What was suppose to be a quick and quiet mission has gone totally FUBAR. This scene illustrates not only how deadly Mao is, but just how committed she is to staying alive. She will battle tooth and claw to survive, even though it is foretold she will never see the love of her life, Death, again.

Lastly, I think it is interesting to view this issue in the light of recent events in America, as you alluded to Patrick. Violence like this is something we’re become used to hearing about in our country. It’s almost as if we just wonder when — not if — the next attack is coming. Seeing an attack like this, in an intimate setting, brings home the horror of these incidents. Whether it be school or a company holiday party, we’ve come to accept these attacks as common place. Issues like this one remind me that we should never think this. That they are horrible and tragic and that something needs to be done to make sure they don’t happen again.