Taylor: We are a society that loves to understand why people are the way they are. Go to any bookstore or read a small amount of investigative journalism and you’re bound to find something dissecting the reasons why a particular person has done a particular thing. While there is a fair amount of literature dedicated to the study of why people do amazing things, there’s almost an equal amount examining those famous for more nefarious reasons. Murderers, terrorists, and dictators are fascinating to many for the reason that it’s interesting to examine what would drive someone to do something truly awful. We Stand On Guard 6 explores this issue but does so not by studying a villain. Rather, it does this by examining its hero.

In the series finale, everything appears to be going wrong for the two-four. All but three of its members are dead, Amber is trapped on an American tanker, victory seems imminent for the Americans. But just as things appear to be going wrong, a stolen Guerrilla and a timely bomb save the day for the Canadians. The lead US tanker blows up and the Americans retreat.

This victory by the two-four comes at a heavy cost. Amber sacrifices herself to defeat the Americans. The way she does this? A bomb strapped to her chest that’s activated by a dead man’s switch. The analogy of Amber’s actions to that of terrorists in the Middle East simply can’t be ignored in this instance. While Amber is the hero in this story, I can’t help but see how her actions illuminate what leads terrorists to carry out such extreme acts as a suicide bomb. Brian K. Vaughan is a smart writer and I’m sure the analogy he draws here is on purpose. After all, he even provides Amber’s motivation for blowing her self up in the clearest terms possible. 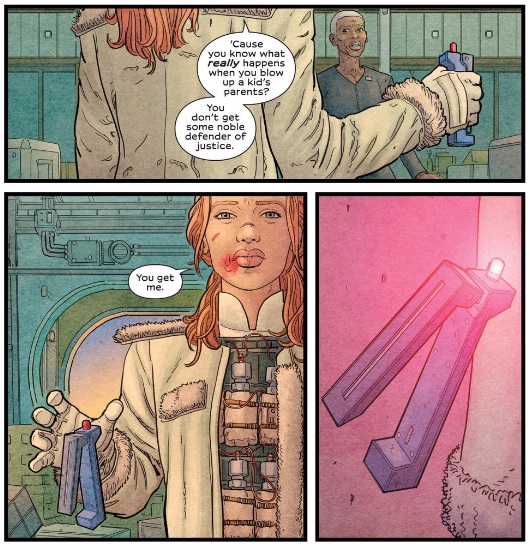 Simply, Amber is willing to blow her self up because she wants revenge on the American’s for killing her parents years ago. The United States blowing up children’s parents sadly isn’t a thing strictly of fiction. As with Amber, this naturally creates feelings of hatred for the US and in some cases leads to individuals taking extreme action to strike back at the thing that hurt them. Since we’ve been following Amber for the entire series, my sympathies naturally lie with her in this narrative. And what’s interesting about that, is that it this has me considering the point of view of America’s so-called enemies, both fictional and real. Seeing Amber sacrifice herself for her ideals makes me actually understand, perhaps just a little bit, why someone would kill themselves in an act of terrorism. That’s a hard feat to achieve and I applaud Vaughan for making me consider someone’s point of view that is far different from my own.

That alone makes me appreciate this issue, but I also like how the story is narratively satisfying. At the beginning of the issue, things are so dark for our heroes. It really does seem plausible that they could lose. However, with Amber’s death, the US loses and the story ends somewhat happily, if a bit melancholy. I just love this juxtaposition and perhaps it’s effect is best exemplified by the first and last page of the book.

Steve Skroce’s art on the first page is gruesome, dark, disturbing, and frankly, depressing. The last page is much brighter and shares with us a beautiful memory from Amber’s past. These two pages couldn’t be more different and they highlight the emotional voyage this issue takes me on from the start to the end. Again, this is storytelling I really appreciate. It’s common for comic books to have one mood for the entire issue. After all, 20 pages is not a lot of space to develop multiple moods. Here, Vaughan pulls off the feat however. This makes for a really satisfying ending since it starts in a dark place and builds tension, but then relieves and resolves the tension by the last page. I generally have been lukewarm on this series but I really liked this issue because of this fine storytelling.

Drew, what do you think? Did you find the ending of this series satisfying? Do you have any thoughts on the series as a whole? Are there any other lessons we can pull out of this issue?

Drew: Those are all great questions, Taylor, but I’m going to take up that last one first. You’re right to point out just how strong the parallels are between Amber and the suicide bombers we’ve come to accept as synonymous with “terrorists.” Actually, I think the parallels are even more specific — the attacks that allegedly motivated the decade-long boondoggle in the north is an obvious twist on 9/11. Vaughan makes a point of clarifying that it really was Canada that launched that first strike (though, I suppose there’s still room for debate over the validity of the confessions the American extracts), effectively dismissing the false flag hypothesis that seems even more prevalent than the “9/11 was an inside job” conspiracy theory.

Vaughan’s point seems to be that it really doesn’t matter — especially if you happen to live in Iraq. Not only is the US response here totally out of proportion, there’s not even the pretense that this is about anything other than natural resources. Even if Canada “started it,” “finishing it” seems to have more to do with their water reserves than anything else. Limited water supplies are a favorite subject of dystopian authors, but what makes it such a brilliant choice here is that it can be tainted in a way that oil can’t be. Amber’s sacrifice doesn’t just represent winning a battle, it represents showing the American’s true colors — they never cared about Canada, they just wanted their water. Once the water goes, so does the will to fight, or even occupy the region.

The other interesting idea I’m left pondering at the end of this issue is Amber’s attitudes towards superheroes. Her interpretation of Superman, as a kid whose parents were blown up, has none of the aspirational qualities that we tend to associate with the character. To an American (or, specifically, the descendant of someone who emigrated here), Superman represents the American dream: he left his homeland behind to come to America, where he was able to achieve things not possible there. There’s an innate American-ness to superheroes that tends to ignore perspectives from other cultures.

(I don’t mean to say that’s inherently bad — Superman was made by Americans for an American audience, just as many cultural artefacts are made for their own cultural milieu — just to point out that superheroes historically didn’t translate well before globalization steamrolled those kinds of cultural differences.)

The point is, Amber isn’t American, and her own experience with blown up parents suggests that it doesn’t turn someone into a champion of American values. Taylor rightly pointed out how true this is of our current war on terror, which is almost certainly creating as many enemies as it destroys, but I’m also curious about how this reflects Vaughan’s own values. Vaughan’s move away from superhero properties could be seen as a common career trajectory — as creators grow an audience, they tend to become empowered to strike out on more rewarding (and potentially lucrative) creator-owned projects — but it’s also easy to read it as a political stance in the wake of 9/11. This theory is too half-baked for me to really expound upon now, but I suspect a thorough reading of Ex Machina might shed some light on Vaughan’s thoughts on where superheroes fit in a post-9/11 world.

In any event, this issue certainly offers intriguing insights on non-American perspectives to American invasion and occupation. There are enough sci-fi/fantasy/speculative elements to keep the political message from being too overpowering, but it’s hard to ignore the parallels. I hope we don’t need anything as shocking as a live-broadcast of a suicide bombing to help us all see where our military interests truly lie, but I’m afraid history hasn’t offered any particularly compelling alternatives.