We try to stay up on what’s going on at Marvel, but we can’t always dig deep into every issue. The solution? Our weekly round-up of titles coming out of Marvel Comics. Today, we’re discussing Deadpool 5, Doctor Strange 4, The Ultimates 3 and Weirdworld 2.

Patrick: The last time I really dug into an issue of Deadpool, I was blown away by the characterization-by-subtraction approach that writer Gerry Duggan was taking for Deadpool. By letting the audience observe the various shortcomings of Deadpool’s impostors, Duggan makes a case for how well-rounded and amazing Wade Wilson really is. But it’s worth mentioning how much work has had to be done to evolve the Merc with the Mouth from the juvenile murder-fest he started as to the noble, family-man, Avengers-benefactor that we know and love now. Deadpool and to grow up, and part of that was ditching Madcap, the psychotic extra set of voice over boxes that plagued Wade for years. There’s a pretty clear metaphor in that – you have to let go of your more childish impulses in order to take your proper place in the grown-up world.

Deadpool 5 lets that metaphor ride, but like any good speculative fiction, asks the reader to consider the implausible reality of the scenario. The question that Duggan and artist Mike Hawthorne pose is: did Madcap drive Deadpool insane, or did Deadpool drive Madcap insane? The big reveal of the issue is the physical toll that existing in Deadpool’s body has taken on Madcap, transforming him face into an absolutely ghoulish figure.

He’s so gross that the shreds of his mask hanging around his face can’t even behave like normal fabric – it’s practically dripping off of his face. It’s like everything has to ooze off of him. Hawthorne, who Madcap points out here has drawn Deadpool’s also-disgusting face a bunch, really pulls out all the stops on this grotesque design. As Madcap pulls himself together, it’s somehow more horrifying than Massacre hacking him apart.

In the end, Madcap is backed into a corner and atomizes himself, but not before asserting that there’s no way to ever get rid of him. Even at a molecular level, he’ll always be out there, somewhere. If Madcap does represent the transgressions of youth, then this ending represents that fear of backsliding into our worst tendencies. Deadpool teeters on that edge anyway — as Preston is eager to remind him with a punch in the head and a stern talkin’ to — he did just use his own daughter as bait. The issue, and by extension the story arc, ends on one of the more somber Deadpool moments we’ve seen recently: a series of movie posters celebrating Deadpool, wrecked up by the man himself, with the clearly not true “…and I’m always fine” coming out of his mouth.

Drew: Early in Doctor Strange 4, the Ancient One tells Stephen, “the harder you punch, the more it hurts you.” He’s making a point about the physical toll of sorcery, but he might as well be talking about the psychological toll of writing. There’s no doubt writer Jason Aaron has the ability to sell a “the magical world hangs in the balance!” kind of story — the real question is what kind of blowback would a story like that bring? Would it diminish any future stories with Doctor Strange? Would it shift his focus from magical doctor (who still makes house calls) to some kind of caretaker of magic itself?

It’s not entirely clear what the repercussions of this story will be, but it’s clear that Aaron is well aware of them. Of course, Aaron’s other work should make it clear that he’s not prone to runaway stakes-inflation — my favorite single issue of his remains Thor: God of Thunder 12, which immediately followed up his “Godbomb” arc, effectively proving he can sell a story with much more human stakes, even after one where the stakes were decidedly godly. The point is, Aaron seems to have already internalized the lessons Stephen is learning here, reminding us that Doctor Strange is more than this one epic story that Aaron happens to be opening with (but that shouldn’t stop us from enjoying all of the epicness).

Spencer: One of the more interesting facets of The Ultimates thus far has been the idea of transparency and accountability. Issue 3’s conflict kicks off with the Shi’ar getting angry at the team for not consulting them about the Galactus incident, but the issue even opens with a recap page masquerading as a broadcast meant to keep the public updated on the Ultimates’ actions. Considering the sheer power of this line-up and the scope of their missions (they’re attempting to fix time itself in issue 3!), it’s certainly a wise idea, but writer Al Ewing also drops a few hints that maybe we should be reading deeper into these characters’ actions and intentions as well. Let’s look at Monica Rambeau first. 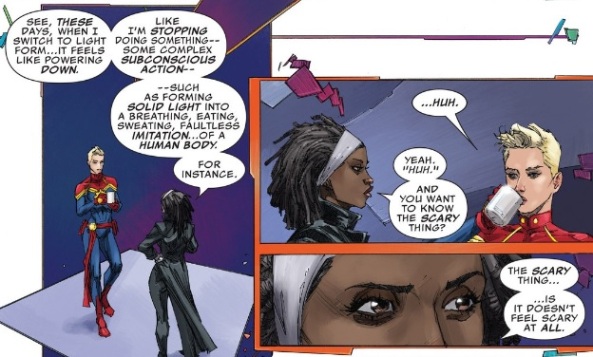 The discovery that she’s essentially no longer human barely fazes her, and on the next page, Carol wonders if it even should. One of the thing I like about this series is the way the characters all admire each other’s powers and skills, but there’s something slightly eerie about this. Should we be worried, or empowered by the Ultimates so eagerly embracing the full scope of their abilities?

Then there’s Ms. America. While it hasn’t been addressed in the series proper yet, the prologue in Avengers 0 showed that America joined the team in order to keep an eye on them, which she’s clearly still doing, even if it’s something Ewing leaves for Kenneth Rocafort to convey through art rather than words (look at how America’s intent stare is the focus of the following panel, even though she’s not involved in the conversation at all).

Later in the issue America clearly takes umbrage to Blue Marvel’s claim that he discovered the Neutral Zone. Why? We’re still unsure, but I’m getting the uneasy feeling that we’re supposed to be uneasy about this team on some level. The arrival of the Anti-Man on the issue’s closing page suddenly makes this a very personal mission for Blue Marvel — if there was ever a time where he could wind up overstepping his boundaries, it would be now.

Taylor: I don’t consider myself a man of unusual tastes. I like pizza, basketball, and action movies among the miscellany of things I favor. Considering that, one might assume I wouldn’t be drawn to a series called Weirdworld, but after reading it’s second issue I am in love. However, I don’t think I love this title because of weirdness of it. Instead, I love it because it combines two of the things I enjoy deeply, which just so happen to be as mainstream as it gets: Adventure Time and Mad Max.

In this issue Becca continues her misadventure in Weirdworld with Goleta, a wizard hunting barbarian. Goleta has taken Becca on as her squire and as such is training her to track wizards. Naturally this leads to all sorts of hijinks that climax in this amazing panel rendered by artist Mile Delmundo. 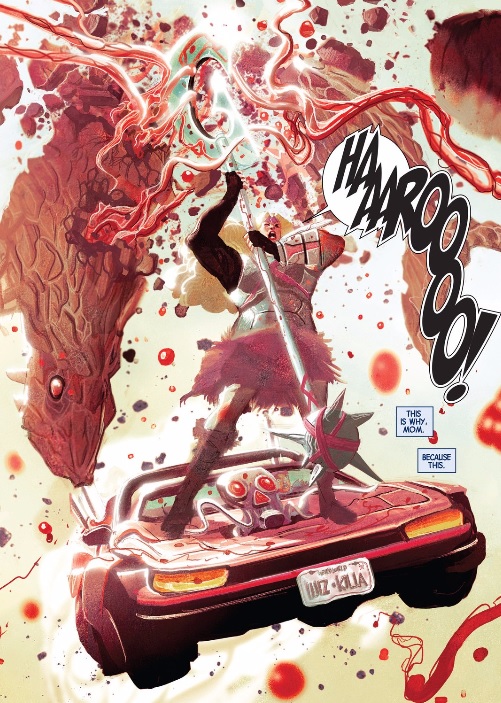 In case you were wondering, that’s Goleta the wizard killer impaling a sandshark atop her muscle car. It’s just all so totally absurd and totally zany that I can’t help but be enthralled by it. When I dig deeper into the elements of this issue, as exemplified by the picture above, I realize that these disparate elements – a muscle car, a wizard killer, sand sharks – actually are all things I enjoy greatly in different story. The car and lone marauder hearken to Mad Max while the wizards and bizarre creatures allude to Adventure Time. Both of those franchises are institutions in their own right and have become such an element in pop culture that they really can’t be considered weird anymore. Throw them together, however, and it becomes unique and simply engrossing.

Which who’s to say that the weirdness of Weirdworld isn’t calculated or somehow contrived. The cynic in me says that perhaps it is. After all, this title is published by Marvel and it’s not in their best interest to necessarily to fund a project that caters to a niche group. So maybe what that suggests is Weirdworld just isn’t so weird after all. Maybe its just catering to my own mainstream interests. If that’s the case I really don’t care. The joy that radiates off from these pages is palpable and I’m going to enjoy the ride while it lasts.