Michael: After the intense Prometheus/Midnighter showdown last issue, Midnighter 8 takes a break from the super serious and opts for the wackier corners of the DCU. Midnighter partakes in a good ol’ fashioned superhero team-up with Dominic Mndawe AKA Freedom Beast – the less racist version of B’wana Beast introduced in Grant Morrison’s Animal Man. Mndawe fills Midnighter in on his ability to create hybrid “chimeras” of different animals. An illegal hunting club called “The Sportsman’s Ambition” has abused Mndawe’s powers in order to create deadly chimeras for them to hunt. The majority of the issue deals with the two heroes taking down the aforementioned Sportsmen, while the end shows the release of Marina Lucas (from Midnighter 2) and Helena Bertinelli’s offer for Midnighter to join Spyral. This is all setting up the next arc: Midnighter vs. The Suicide Squad.

Midnighter 8 serves as the “one-and-done” bridge between two bigger Midnighter story arcs. Things had gotten so serious and deadly with the Prometheus story that this more lighthearted issue is kind of a surprise. I suppose I’m still loving that Prometheus reveal from two issues ago, so it was sort of disappointing how quickly that was resolved or how Prometheus doesn’t seem to be affected by it. Then again Midnighter is not the type of hero that broods over emotional wounds, as he briefly recaps the reveal/betrayal of his supposed lover. Time and time again Steve Orlando shows us that Midnighter is not your stereotypical vigilante. Batman may have his Bruce Wayne identity but Midnighter has no civilian identity – Midnighter is simply Midnighter.

I won’t go so far as to say that this issue is a thematic mess, but there is definitely a lot going on here. Midnighter 8 is a one-off candy shell with a chewy epilogue/prologue center. It’s never really explained how or why, but it appears that Midnighter is going to be the subject of a documentary. Orlando opens with the interviewer asking the “who is Midnighter?” question, perhaps suggesting that Midnighter is still trying to find an answer for that himself. Maybe I was too quick to judge Midnighter’s reaction to the whole Prometheus kerfuffle; maybe Midnighter 8 is a weird way of attempting to address the confusing thought process of heartbreak for a sociopath killer hero. 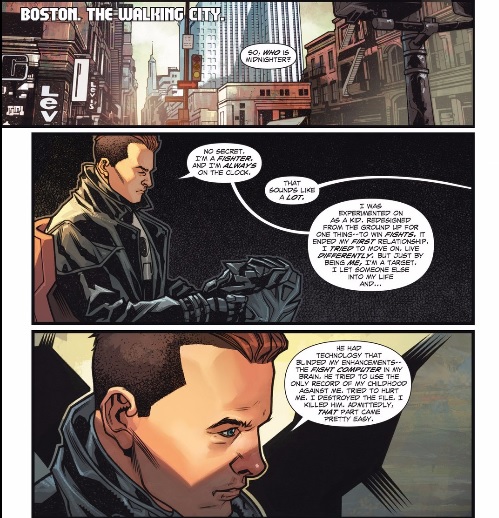 Midnighter doesn’t give the documentarian a very substantial interview before he’s called away to work. He goes over the extreme events of his life in a very blunt and nonchalant way – as if he’s just itching for the damn thing to be over with. Midnighter can process an attack strategy within seconds but processing his own feelings might be a bit trickier, so why not have someone else figure them out for him?

Dominic Mndawe/Freedom Beast’s whole shtick is fusing animals together – while visually nightmarish, apparently it’s ok when he does it. Could David Messina’s grotesque chimera hybrids be a metaphoric manifestation of Midnighter’s internal struggle? Or do I just really miss Prometheus? Either way, I’m very happy to see one of the weirder DC heroes get some love – and the oddball Midnighter seems like a great book to do it. Midnighter himself addresses his kinship to animals who have been twisted and shaped into something else.

Ryan! How did you enjoy Midnighter 8? I liked Messina’s artwork but did you also miss a certain je ne sais quoi without ACO’s kinetic action scenes? Are you looking forward to a Suicide Squad fight or do you think it feels forced? Note that Harley Quinn is holding a baseball bat like a gun like the Suicide Squad movie.

Ryan D.: Of course there is a direct visual allusion to the upcoming film, because even though that film does not drop until August 5th, ’tis always the season for tie-ins! While I have absolutely loved all of the amazing banter in the dynamics between Midnighter and Dick Grayson, it almost feels as if the creative team- or maybe the higher-ups who write their checks?- do not feel as if Midnighter himself carries enough weight to sell comics as a stand-alone character. If that conjecture is true, then that is too bad; I, too, thought that the Prometheus arc read as a gripping reveal and proper way to test a character who seems to be virtually unbeatable. Like Michael, I also wanted to see more of Midnighter wrestle with the emotional fallout of the previous arc. After all, much like when writing another superhero with high-end powers like Superman, how did Midnighter eventually triumph over a foe who seems to match or supercede a protagonist’s skill set? For as sociopathic as the titular character seems, ultimately it was his lack of compromise based upon his code of morals and grit which won him the day- which is the same exact way that Superman overcomes fistfights with Bizzaro or General Zod. To deny the audience from Midnighter emoting in some way after this taxing moral victory is to deny the character his humanity, upon which the entire series rests. After all, without his moral compass (which is, of course, incredibly lenient when it comes to murdering baddies) and attempts at holding relationships with regular people like his bartender in Boston, Midnighter would be a villain, plain and simple. My only hope is that someone in the Suicide Squad (or Spyral?) will prey upon Midnighter’s meager grieving time to torture him when he invariably finds himself in dire straights against them.

As far as the art goes, Messina shows some very pretty smoothness which matches with some aspects of Midnighter and fit well with the fantastical beasts featured in this issue; nonetheless, I find the grittiness of texture and non-linear, frantic panel composition of ACO’s to be a pitch-perfect fit for the over-all mien of the series. Take this page of action, for example:

While Midnighter here is illustrated with a beautiful fluidity, what I miss is the grounded explosiveness of his actions as seen in previous renderings. While this is a very small thing to pick on, the middle panel shows our hero’s foot kind of hovering over the ground. If the character is not shown as a body, under gravity and in time and space, we lose the precision and tensile strength that stops him from looking like a poor-man’s Batman. If you’ll pardon all the images, compare the previous page with one from Midnighter 7:

Boom. There is something very human about a body pushing against the ground and the ground pushing back. ACO also made a lot of bold choices with high and low angles and a bold disregard for the gutter. Again, I know I am nitpicking a very good outing by Messina, but these small details is indicative of the difference I find between his style and ACO’s, and ultimately why one resonates better with the title than the other.

The art style matters so much to me because I have been delighted at how Midnighter feels like an alternative superhero, using that word in the same way we mean when we say “alt-rock”. I haven’t enjoyed a fresh perspective on a violent character so much since I breezed through Huston’s 2006 run of Moon Knight, another hero who does not shy away from brutality and takes care of his own. Anything that would take away from this title’s individuality, then- whether it be a more traditional artist or a really commercial tie-in with Suicide Squad- makes me nervous. Midnighter is a badass with a tormented past and beautiful lethality (who happens to be gay), with the essence of this being lost between his debut in The Authority and this series. I am also skeptical at things like this following exchange between Midnighter and Freedom Beast:

One of my favorite aspects of Midnighter is that he never compromises his values, and I felt it was a little forced that he wouldn’t start this interaction with a punch to Mndawe’s face, just on principle.

But hey, all of this critiquing is coming from a fan who has really enjoyed a Renaissance in a very interesting, unique character. I have full faith in Steve Orlando, whose very specific vision has built a wonderful, playful, savage, and complex character and title, though this issue did try to juggle a lot while serving its purpose as a buffer issue; I can only hope that the integrity of this character will survive into its next arc and beyond!