Spencer: Have you ever watched or read something that you could tell was good, but something about it just didn’t work for you? Maybe there was just one small plot point that rang false, but the failure of that one moment led to the rest of the narrative collapsing around it? That’s the way I feel about Robin War 2. There’s quite a bit about this issue that I like, but there’s one flaw in its very premise that kinda ruins the entire event: writer Tom King never explains why the Court of Owls wants to reclaim Dick Grayson so badly.

I asked fellow Retcon Punch-er Patrick if he understood why, and he answered “Because he’s the Gray Son,” to which I replied, “…okay?” We laughed it off, but that is legitimately the only explanation any installment of “Robin War” has provided as to the Court’s motives. Thankfully, the meaning of the “Gray Son” and his significance to the Court of Owls isn’t a big mystery — you can learn all about it by checking out Nightwing 7, 8, and 9 — but I still contend that it’s a major failing for “Robin War” to base its entire plot on a nearly four-year-old story that King not only neglects to recap, but doesn’t even reference. Would it’ve hurt to have at least thrown an editor’s note about those Nightwing issues in there somewhere?

Still, even when I do factor that backstory in I don’t fully buy the Court’s motivations. Here’s what we know: Dick Grayson is the descendent of the Court’s greatest Talon, William Cobb; Dick was trained at Haly’s Circus to become a Talon before being adopted by Bruce, and the Court was never quite satisfied with Dick’s replacement; Dick was specifically “bred” by Haly and the Court to be a true Gray Son of the city, an enforcer that falls somewhere between the city’s privileged and its destitute. So why does the Court want him back? They could just be trying to take back what’s “theirs,” but that neglects them continuing to let Strix and Calvin Rose walk around free. As an agent of Spyral, Dick could grant the Court access to vast new resources and technology, but that idea doesn’t even seem to have entered their heads — they’re interested in their “Gray Son,” not Agent 37.

What I take from that is that Dick has great symbolic meaning to the Court — they want Dick more for what he represents to them than any tangible benefit he provides. I guess I can understand that, but I have to ask: is Dick worth the lengths the Court goes through to get him back? The answer is clear: no. How much money do you think the Court wasted on those holding cells for the Robins? They also sacrificed a valuable contact in Gotham’s government (Senator Noctura), plus at least one of their “assassin” Talons and seemingly their entire crop of “Berserker” Talons, just for Grayson. And do they really think an agent they recruited under duress is going to stick around long or show any kind of loyalty? These Owls aren’t very genre-savvy.

So I suppose that maybe my issue is less that the Court’s motivations are thin, and more that they make the Court look stupid. We’ve mentioned before that the more DC explores the Court, the less mythic and dangerous they feel, and “Robin War” is a prime example of that. This is a petty, personal plot — that suits Lincoln March, but not the Owls who approved and funded it. It also goes against a lot of previously established facts about the Court. That final page reveal of a worldwide “Parliament” of Owls is absolutely chilling, but works less and less the more I think about it. If the Owls are global, why are they a Gotham myth? If the Owls are global, how could Calvin Rose escape them by hiding out anywhere other than Gotham? Even the idea of Berserker Talons doesn’t make sense to me. Technology didn’t factor into the Talons until they started resurrecting them at the beginning of Snyder’s Batman run. Where did the Court get the technology to create and store these Berserkers 100 years ago? And since when did the Court start creating Talons like they’re mass-produced clones? What made the Talons interesting was that each was an unique character with their own backstory — there goes that right out the window.

And it’s a shame such a central tenant of this crossover is so murky and ill-constructed, because there really is a lot of fun stuff going on in this issue. I love Duke winning Damian’s friendship by standing up to him, and King’s writing throughout their confrontation is especially sharp. 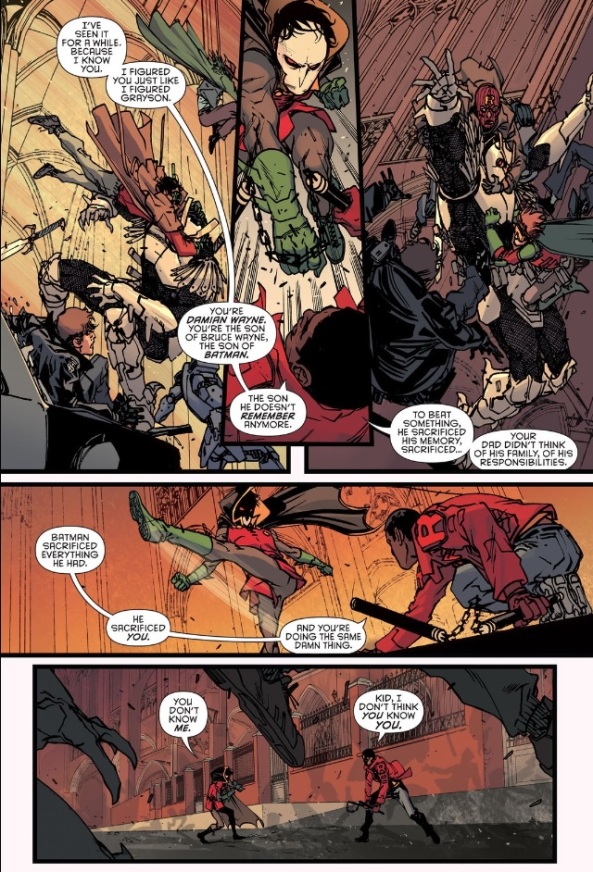 Not only does this explain why Damian would submit to the Court instead of defying them as he does everybody else, but it also finally addresses and defines the relationship between Damian and his amnesiac father. It progresses plot and character in an efficient, interesting way — if only every aspect of this issue could be as smart as the Duke/Damian scenes.

There’s also a few design choices I particularly liked. My favorite has to be when Duke’s font suddenly switches to the We Are Robin font as he stands up to Damian. 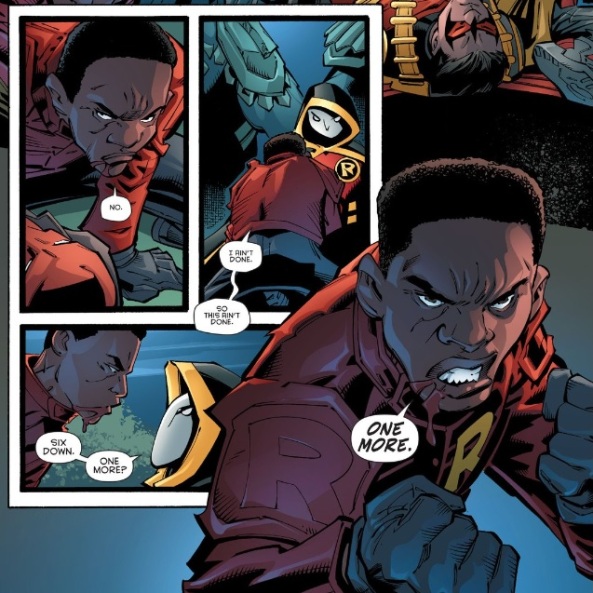 It’s the comic equivalent of his theme song suddenly playing, and that couldn’t be cooler.

Michael, what do you think — am I being too picky? King does a lot right here, especially when he focuses on Damian and the Robins, but the failings of the Grayson/Court plot just kinda ruins the whole crossover for me. It’s like a beautiful mansion built on a shoddy foundation — no matter how nice it is, it can’t stand on its own. Also, Michael, how do you think King ultimately handled the themes of the crossover? He may have defined what a “Robin” is, but I feel like he left a lot of questions about the safety and validity of the Robin Movement unanswered. Just because the Court set up that Robin who killed a cop doesn’t change the danger he presented as an untrained vigilante, after all.

Michael: Oh Spencer, Spencer, Spencer. I fear that our friends at Retcon Punch have put on their owl masks and engineered you and I to go to war; because I severely disliked Robin War 2. A month and change ago I was reading Robin War 1 and was totally vibing with the concept of Robin War. I thought the idea of the perceived threat of a group of vigilante minors and heated tension with the police department over controversial laws was incredibly relevant and bold…until Tom King laid his cards on the table at the end of the first chapter and revealed that it was all a plot by the Court to get Dick Grayson back.  That’s my problem with Robin War as a whole; let’s get into my problems with the finale.

Spencer mentioned that he didn’t buy the Court’s motivations but I’ll go one further and say that I don’t buy ANYONE’S motivations in Robin War 2. One of my biggest pet peeves in books from the Big Two — which is especially prevalent in an “event book” like Robin War — is the needless game of musical chairs that creators make the characters play. I’m not faulting consistency among all of the books that fell under the “Robin War” banner; that can’t be helped. What really frustrates me is when Marvel or DC thinks that shifting alliances and “shocking decisions” constitutes as actual storytelling. Listen, I understand that superheroes often fight each other; that comes with the territory of the cape and tights. The trick of good superhero storytelling is getting the reader to believe the reason the heroes are fighting each other.

The elaborate, ludicrous plan that Lincoln March revealed is certainly not enough for me to accept Damian’s turn as “Gray Son” (barf), let alone Dick’s. I shouldn’t be surprised though, right? DC and King very plainly stated that the goal was to get Dick-as-Nightwing back from the get-go. When Lincoln March (who, let’s remember, staged not one but two mastermind schemes against the Court’s wishes) not-so-subtly leads Dick to the conclusion that Nightwing = Owl, I almost rolled my eyes into oblivion. I don’t want to rip apart Tom King because as evidenced by Grayson, the man is without a doubt talented. For that reason I’m going to optimistically give King the benefit of the doubt and chalk this forced transition up to editorial edict. Let’s look at it this way: remember Nightwing 30? The last issue as he transitioned to an Agent of Spyral in Grayson? Man I fucking HATED that issue — it was a bleak and cruel end for the series and a chapter in Dick Grayson’s career. On the bright side however, it lead to the fun and unabashed style of Grayson. I trust King with Dick Grayson, so I’ll try to let this messy Robin War slide.

The cast of We Are Robin understandably played a large role in the overall “Robin War” story and in this particular issue. I think that We Are Robin is a better concept than it is a comic book, but “Robin War” has effectively deflated that concept for me. Maybe it’s because I read the phrase “I am/We are Robin” one too many times and this was the straw that broke the camel’s back. Not to completely rehash my same argument from above, but the whole inversion of Duke’s “I’m not Robin” declaration just felt like another game of musical chairs. Putting Dick and Damian at the forefront of the conflict of Robin War 2 made the We Are Robin bunch come off as nothing but background players. Though still over-the-top, it would’ve been more compelling to have Damian stay the Owl’s “Gray Son” (barf) and have Duke finally step up to the plate and become Robin. But that’s the tricky thing about working with all of these Bat-books isn’t it? All of the major players in “Robin War” have their own ongoing books with their own creative directions set; hence: King ending Robin War 2 with Dick as the only one who walks away different. And there’s no doubt in my mind that Scott Snyder has Batman plans for Duke Thomas beyond We Are Robin.