Spencer: Telling someone they see things in black and white is practically tantamount to calling them childish. The general idea is that as people grow up, the world and the decisions they have to make in it become more ethically gray, and trying to hold onto clear definitions of “good” and “evil” in the light of that is futile. Of course, when confronted with that line of reasoning many respond just as Calvin did in the strip above — they claim that sometimes things really are that simple! In essence, this is the argument that dominates Teenage Mutant Ninja Turtles 54, where the Mutanimals nearly splinter over the discovery of Old Hob and Hun’s alliance.

Having grown suspicious of Hob, Michaelangelo follows him after a mission and discovers that, not only is he stockpiling the weapons he claimed to be destroying, but he’s also in league with Casey’s monstrous father, Hun! A fight ensues, only broken up by the arrival of the rest of the Mutanimals (especially the livid Slash). The team spends the rest of the issue debating how to deal with the revelation — a lengthy debate could have easily turned deathly boring in any other book, but under the pens of Kevin Eastman, Bobby Curnow, and Tom Waltz, it’s absolutely riveting.

There’s two reasons for this. The first is that Eastman, Curnow, and Waltz have populated Teenage Mutant Ninja Turtles with a massive supporting cast, and the second is that each member of that cast has their own point of view, and can thus form their own varied, organic opinions about Hob’s behavior.

While Mikey and Slash’s opinions are the most important to the issue, the writing team still makes sure to give each Mutanimal a chance to react to Hob’s plans, and gives each character a stance that stems naturally from their already established personalities. Maybe that seems like a given, but there are plenty of other books that would’ve just had the Mutanimals simply echo back the opinions of either Hob or Mikey. That would’ve been a far less satisfying take.

Anyway, Hob’s explanation that he’s just using Hun as a liaison to sell and buy goods from bigoted humans doesn’t fly with Slash and Mikey, both of whom are once again flying solo by the issue’s end. Pointedly, Mikey completely denies Hob’s strategy altogether, claiming that “two wrongs don’t make a right,” while Slash has a slightly more nuanced take. 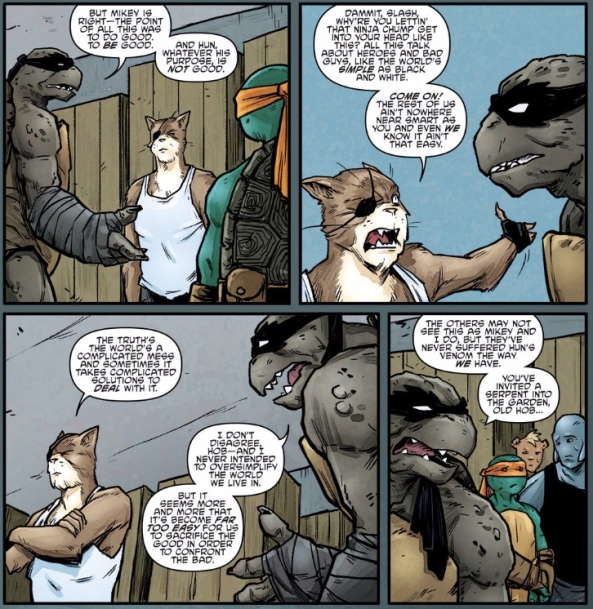 Slash can’t deny that the world is full of grays, but this particular shade is simply too much for him to bear. Mikey’s take seems especially simplistic in comparison — sure, he has more reason than almost anyone to hate Hun, but his perspective mainly seems rooted in the idea of doing what’s right just for the sake of doing right. There’s certainly nothing wrong with that, but Mikey’s pure heart alone can’t protect him from the harsh nature of the world he lives in, or give him a new team to run with.

That’s what’s most heartbreaking about this issue to me. It seemed like Mikey had finally found a place where he could fit in after rejecting his family’s assimilation of the Foot, but it turns out that the Mutanimals were making similar compromises, and Mikey still can’t deal with that. I have to wonder if Mikey regrets leaving his family, especially after having seen what a poor replacement the Mutanimals make.

Again, it’s a testament to Eastman, Curnow, and Waltz’s characterization that, even if the reader can’t necessarily sympathize with Hob here, they can definitely see where he’s coming from. Unlike Mikey, who was born into a loving (albeit bizarre) family, Hob had to make himself a family, and seeing it start to fall apart right in front of his eyes can’t be easy to deal with. But as Sally points out in the first image I posted, lying and keeping secrets is not how you deal with family. Hob went behind his family’s back to deal with Hun, and is secretly seething inside at having to let Slash leave the team. In comparison, Splinter was up-front with Mikey about taking over the Foot, and is giving Mikey the space he needs to work things out.

Splinter and the Foot are clearly the lesser of two evils here, but even if that’s the case, and despite any regrets he may feel, Mikey isn’t ready to rejoin them yet. Maybe he shouldn’t be. For an issue that spends so much time debating a point, Teenage Mutant Ninja Turtles 54 never comes to a concrete answer on the issue. That’s to its benefit — instead of moralizing, Eastman, Curnow, and Waltz allow their readers to become invested in each character’s unique moral dilemmas. The question here isn’t whether Mikey will find a place to fit in or eventually rejoin his family (obviously he will), it’s whether he’ll compromise his morals to do so, and that’s a far more engaging conflict.

I will say that my one issue with this current storyline is that it’s such a slow burn. With so many villains lurking quietly in the background (including new arrival Agent Bishop), it’s hard to tell what everything’s leading up to. Now don’t get me wrong, this creative team has proven themselves masters at long-term plotting, so I have faith that every villain being seeded here will pay off and pay off well, but I do miss the propulsive momentum this title had in the months leading up to issue 50. Still, if this current slow pace continues to allow for the kind of detailed, nuanced character work we got in Teenage Mutant Ninja Turtles 54, than I’d say it’s all worth it. What do you think, Drew? And do you have any thoughts on the art of Michael Dialynas and Ronda Pattison? As a big fan of Dialynas’ work on The Woods, I’ve really been enjoying his take on the Turtles — he’s a comfortable, natural fit for this book.

Drew: You’re very right there, Spencer — I’m impressed at how well Dialynas fits in with the aesthetic of this series without losing the character of his work. I remarked last month on the changes his style brought to the tone of the series, but here, those differences blend seamlessly with recent contributions from Mateus Santolouco and Cory Smith. Part of that seamlessness is certainly owed to Pattison, whose consistently great work on the series maintains continuity in spite of the contrasting styles of the pencillers she’s working with. Her choices during the fight scene lend an extra dynamism that I may have undervalued when marvelling at similar scenes by Smith and Santolouco.

But I don’t want to neglect Dialynas’ contributions here. As Spencer notes, the climax of this issue is decidedly talky, but Dialynas doesn’t lose any of the momentum he builds during the fight. Indeed, that debate uses much of the same skills at depicting a range of emotions — from intense anger to uncertainty — that he uses on The Woods (though here, he overcomes the added challenge of most of the cast being non-human). Which I suppose brings us back to the substance of the debate.

Spencer noted the way we conflate black-and-white morality with childishness, but I’d argue that it’s less about naiveté than it is about idealism, in which case, it’s less the domain of children than teens. That is, a child might see the world in terms of black and white, but it’s teens that tend to get in spirited debates about things being absolutely right or absolutely wrong. That driving idealism may ultimately be naive, too, but I think it comes from a different place. Point is, I totally believe Mikey’s indignation here, and I think forcing this debate adds depth to his estrangement from his family — he didn’t just leave because killing is wrong, but because he doesn’t believe compromising his morals can lead to moral outcomes.

Previous arcs have explored what happens to the turtles in the absence of each member, but it’s interesting that this arc has been so focused on Mikey’s struggles, rather than those of his family. This is a smart choice, since Mikey’s idealism wasn’t totally defined before — it was easy to read him as naive or childish, based on his moral objections and general emotional openness — which in turn sets a clear expectation of what might happen to the family in his absence.

All of these arcs where one of the turtles is removed from the team puts forward a notion that, collectively, they represent a well-balanced teenager: smart, trusting, emotionally charged, and idealistic. All of those characteristics are normal and healthy, but can lead to risky behavior or bad decisions when left unchecked. Curiously, Slash seems to embody all of these characteristics at once, and this issue makes a point of highlighting all of them. Of course, even he can let those characteristics get out of balance, emphasized here when he hulks out — effectively channeling an exaggerated version of Raph. The question that’s left lingering over the issue, for me, is whether those elements are still out of balance when he opts to leave the Mutanimals; is he making a thoughtful, reasoned decision, or is his idealism running away with itself?

Honestly, I’m not sure. Eastman, Curnow, and Waltz do a brilliant job of explicating Hob’s argument here. Stockpiling weapons and dabbling in arms dealing certainly don’t feel like the actions of good guys — and Spencer rightly points out that dishonesty about those activities only makes them worse — but it’s all in service of an agenda that everyone agrees is good: freeing mutants. I don’t mean to suggest that Hob is right (I definitely think his private, violent confrontation with Mikey is meant to emphasize that he really is a bad guy), just that the writing team gives his argument enough support to make me believe that some of the characters might agree with him.

Man, everything is working here. Spencer rightly calls this arc a slow burn, but this issue has everything I come to this series for: dynamic action, beautiful art, nuanced character work, and clever plotting. It’s a self-contained parlor drama that just so happens to pull double duty in putting the characters in place for the series as a whole. I’ll gladly take a very slow master plot if the individual issues are as fun as this one.