Drew: I’m currently taking a class on autobiographical comics, and the discussion thus far has centered around the question of subjectivity. Many of the memoirists we’ve examined thus far have favored the “truth” found in their subjective experience, as opposed to the “historical truth” of a more objective account, but I’ve always found the assumption that history is objective to be problematic. “History is written by the victors,” as the saying goes, revealing not only that history is necessarily biased, but also that history is more the story of wars than life. Indeed, even a historical account of a war has to consider who the story is really about: Generals? Individual soldiers? Civilians? Reporters? That last one may seem out of place, taking a narrow focus on people who neither represent the masses nor the machinations of war, but as the ones literally writing the histories as they happen, reporters are the only ones capable of giving an account that isn’t filtered through the subjective experience of someone else (as, say, a civilian’s story as told by a reporter would be). There are more layers of subjectivity to explore here, but the point is: reporters’ stories are just as important as those they cover, which makes Saga 33‘s turn to Upsher and Doff so welcome.

After finally catching word of The Brand’s death, Upsher and Doff are free to pursue Alana and Marko’s story. Doff is reticent, but after humoring Upsher’s curiosity, is eventually drawn into the story of a little girl caught in the middle of all of this madness. Effectively, Doff is the reluctant reader who can’t help but love Saga. As someone who has gifted Saga collections to otherwise non-comics-reading friends and family, this endears both of these characters to me: in Upsher, I see myself, pushing this great story into the hands of my loved ones; in Doff, I see the loved ones who came to appreciate the story, in spite of themselves. And that’s a narrative I know many Saga fans can relate to, on one side or the other, which means we’re all rooting for these two.

Of course, as such capable journalists, they’re easy to root for. They’re mostly retracing steps we’ve already seen Marko and Alana take, but the way they piece the story together is as thrilling as any police procedural. Indeed, these two are basically detectives who emphasize “truth” over “justice.” But, as I suggested earlier, “truth” is a sticky concept when it comes to the story of individuals.

They know Ginny’s perspective on the situation isn’t complete, but they also suspect that it fits into whatever story it is they’re trying to tell.

Which brings me to the question of what that story might be. I mean, I understand that its plot will be similar to that of Saga, but why are they so keen to tell it? Doff is clear that he’s in it to save Hazel, but Upsher’s motives seem more based in journalistic glory, excited that he can again pursue the story “of the millennium.” Indeed, when Doff raises ethical questions about exposing people who clearly just want to be left alone, Upsher insists that “they made their bed. It’s our job to go through the dirty sheets.” He’s not interested in Alana, Marko, or Hazel, just that their story might “send shockwaves through the rest of the universe.”

That may come off as cold, but I think writer Brian K. Vaughan might be implicating himself there. It’s hard not to smile knowingly when Upsher takes issue with The Will’s billing order. 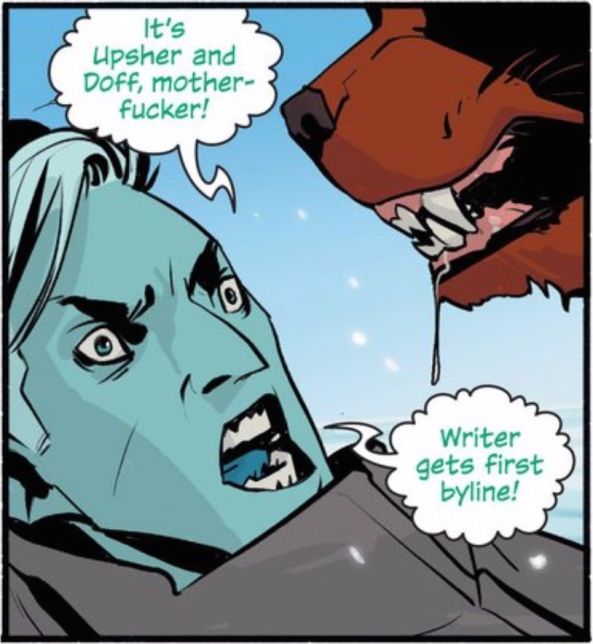 As the in-universe writer/artist team Upsher and Doff are obvious stand-ins for Vaughan and Fiona Staples. In addition to making that sex scene extra awkward, interpreting Upsher and Doff as analogues of the creative team might reveal something about their attitudes about these characters. Vaughan is notorious for putting his characters through hell — some might call it cruel, but it certainly makes for heart-rending stories. Staples, on the other hand, regrets every time Vaughan kills off one of these characters. Perhaps she’s ultimately concerned about Hazel’s well-being, while he’s more interested in “the story”? I’m not entirely convinced by that — these are both incredible storytellers, who need both empathy and a willingness to kill their darlings in turn — but the parallels are definitely laid bare in this issue.

Which, actually, given that they’re ultimately conscripted in service of The Will (notably outsized in this issue), might be even more on the nose than I realized. Could Upsher and Doff’s story really be an autobiographical account of how Vaughan and Staples came to work in service of a force beyond either of them? Ooh! In that case, I’m guessing “The Brand” (whose power over Upsher suppressed this story for years) was Vertigo!

Ryan, I might be flying off the handle a bit here. Saga has always been, at least a little bit, about the creative process, but this reading suggests it might be eating its own tail. Does that interpretation work for you, or are you finding another story here? Also, how much salamander semen do you suppose the will had to eat to get better?

Ryan: Enough to give him a bonus belly voice, I guess. Maybe 4 quarts?

Drew, I love your take on the meta-fictional underpinnings of the narrative, but I do think that there is enough working outside that to keep the issue from becoming recursive. Drawing a direct parallel between Upsher/Doff and Vaughan/Staples, as you noted, turns the sex scenes into a stranger endeavor, but there is a larger more problematic issue in Upsher’s treatment of Doff. I hope it is not a reflection of the creative team’s dynamic. Upsher’s ambition and desires creates a myopia in which Doff is barely given consideration. The issue opens with a small moment of triumph in Doff’s day.

The reader only gets one panel to appreciate Doff’s work before Upsher’s impatience literally destroys the image. The choice to show the dark room from over Doff’s shoulder reinforces the feeling of identifying with the photographer. Staples’ work with light in that last panel not only beautiful, it really helps with setting. The white tinge to the lights immediately puts to mind the fluorescent overhead lighting of a generic office. That sense of drab is reinforced later as their editor pours himself a coffee in the kitchenette, the cord of the coffee pot hanging off the side of the counter. Even though we only stay there for a few pages, it’s easy to get a sense of what life was like for Upsher and Doff in the time since being cursed by The Brand and why they are ready to return to the adventure of a big story.

Theirs is the central relationship of the issue and the story helps to illustrate their different values. Upsher’s drive to write this story comes from a need for recognition and regained pride. While, as you noted, Doff has Hazel in mind. These two men are clearly committed to their partnership, but it’s not an easy relationship. Doff is reduced by Upsher again and again throughout the issue. His empathy for Marko and Alana is dismissed and his concern for the child is treated as an affront to Upsher’s desire to be childless. Even when he has helpful information, Upsher would rather be snarky.

Doff gets down on his hands and knees to examine the ground. At the same time, Upsher has the posture of a pouting tween. The issue’s tight focus on their dynamic allows us to both see how they function together and begin to worry about whether they will make it through whatever The Will has in mind.

Drew, your point about the inherent subjectivity of history is absolutely relevant to these particular characters. An ongoing theme in Saga is the power of perspective to warp and change what you perceive to be true. With their inherent (and very human) biases and motivations, no reader can expect Upsher and Doff to create a purely objective record of the story. Whatever version of the story that they present, it will be incomplete.