Drew: I wince whenever someone asks me if I can play chess. I certainly understand the rules of the game, but I feel like that makes me a chess player in as much as understanding the mechanics of applying paint to canvas makes me a painter. That is, the actual playing of chess lies not in my rudimentary grasp of what moves are allowable, but in the nuance of applying those moves towards a goal. Real chess players have so internalized those rules, they can plan several moves ahead, and the strategy ultimately revolves around forcing their opponent into moves they can anticipate. This is exactly the kind of game Velvet has been playing with ARC-7 for most of this series, and she’s damn good at it. But what if the rules she had internalized weren’t the rules of the game at all? That’s the situation she finds herself in this month, as Damian Lake proves to be even more of a wild card than she ever imagined.

Last month revealed Damian was also at the bar where Velvet was meeting Rachel Tanner — the one person who might know what X-14 got up to during those crucial “missing hours” — but how? Velvet concludes that Damian must have been working for ARC-7 all along, but again, she’s working with limited information. What follows is an intricate piece of plotting that bears some explication. Velvet’s standoff with Damian raises alarm bells, so Max is told to go get her. On his way, he intervenes as Rachel Tanner is being rustled into a trunk by Damian’s goons, killing the men, and sending Rachel off in his car.

Max doesn’t have the full picture, either, but working under the assumption that Damian isn’t working for ARC-7, he reads Damian holding Velvet at gunpoint quite a bit differently. That is, Max thinks he’s rescuing Velvet, but she thinks this is just a ruse to put her guard down. Unfortunately, not knowing who to trust, Velvet is forced to trust neither, and Max is killed in the standoff. Artist Steve Epting perfectly captures Velvet’s confusion as Damian shoots Max, effectively spiking her “they’re working together” theory.

Throughout the series, Epting has reserved slanted panels for action, but this issue found me fixated on another quirk of his paneling on this series — his application of full bleeds (that is, running the image to the edge of the page). Specifically, he generally uses bleeds on the middle panels, while the first and last panel of each page tend to have regular margins. It’s not a hard and fast rule by any means — he certainly breaks it a few times in this issue alone — but he uses it enough to remark upon (both of the excerpts I included use this format), as it establishes a very clear sense of pacing, pulling us into the action in the middle of the page, while easing us into and out of each page turn with white space.

Moreover, that regularity makes the occasional exception all the more remarkable. Indeed, as the issue progresses, Epting uses that type of layout more and more often, with an unbroken string of eight pages before throwing us this one: 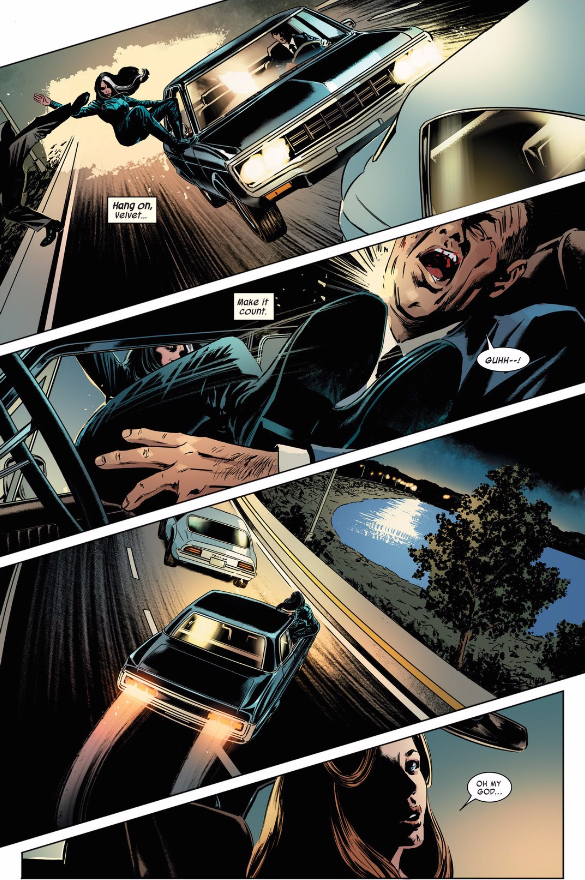 The bleed and the slant of that first panel captures the kineticism of Velvet’s feat there, catching and climbing into a speeding car. The angle also primes us for the kick in the second panel, and directs us towards the inevitable crash in the third (though that crash doesn’t arrive — quite spectacularly — until the next page). From here the action winds down with one more margin/bleed sandwich before culminating in a much more straightforward page as we move back into the realm of plotting and Velvet gets her next lead: the Watergate Hotel.

Ryan! I’m curious what your reaction is to that reveal. I’m guessing there has to be more to the story than just being involved in the break-in — there’s no sense in killing a spy to cover up a crime if you’re also recording your conversations about covering up said crime — but that’s maybe getting ahead of myself. Are you excited to have this story tie back to real-world events, or would you rather it stay in the realm of spy fantasy?

Ryan D: Do not take this the wrong way, Drew, but the reveal’s promise to tie into one of the greatest political controversies in US history is not what excites me; it is, rather, the very slow, intentional trickle of information and gripping mystery which keeps me tuning into Velvet every issue, and the historical inclusions have always been cake icing for me, which I hope they remain. As much as I love a great real-world tie-in, the climate and world which Brubaker and Epting built is plenty dense as it stands. While current events of the era have never been too far away from the main story, I do appreciate the shift from the more inter-personal nature of the conflict into on which will bring in the “clash-of-civilizations aspect of espionage fiction”, as Jess Nevins wrote in an addendum included at the end of Velvet 1 titled “ A History of Spy Fiction Through the Cold War”.

With that Nevins article in mind, I find it difficult not to be impressed by how many different iterations of the spy genre Brubaker pays homage to. We see Velvet embody the role of the “rogue (fe)male” who is part private eye/part assassin, in a world which is morally — and not only mortally — perilous, wherein larger ideals of loyalty and faith are examined, all while keeping a pulpy sense of action and adventure and ridiculous technology. Woof. That pretty much covers all of the big genre tropes explored from the last century or so. Even with all of this going on, or maybe because of it, this title still retains its readability.

As you may have gleaned from Drew’s breakdown of this issues brilliant use of slant paneling, the art in this title deserve just as many accolades.  Speaking broadly, the general aesthetic here somehow dwells both in the murky and the clean, with dense shadows contrasting with bright colors and strong lines which always find their light. Elizabeth Breitweiser’s lighting is actually one of the subtle ingredients of success in this title and, coupled with Epting’s choices in background which range from the photo-realistic to color pastel smears, allows the artistic team full control over where the reader’s focus goes in any given panel. Take this tense stand-off, for example:

These two panels depicted are actually adjacent to each other in the comic; the bottoms of two neighboring pages. The panels in between feature a mix of close-up shots of the various characters before bringing us right back to the same Mexican stand-off, using the rule of threes to structure the scene and dangling the gun in the middle, almost within reach, to ratchet up the tension. It’s very cinematic; you can almost imagine the swing of the dolly changing the perspective. Also, a wonderful, small character note for Damian Fucking Lake is how relaxed his free arm is. There is nothing more unnerving than a person who can stand with their arms by their side with no fidgeting or hands in pockets.

The moment before Max joins the fray is also an absolutely stunning page showcasing two other visual trademarks of this series:

First, I love the panel-less onomatopoeia introducing the aural sense of the scene, broken by Velvet’s head to show that it is part and parcel with the ensuing action, instead of cluttering up the stand-off with “noise.” We then get one of Epting’s trademark diode-style smash panel with the sprinkler system engaging, which always tickles my brain with a wonderful feeling of “and THEN” or “now THIS”. Finally, the inclusion of Lake’s hologram tips it’s hat to the technological fetishism which is now part and parcel with the spy genre.

Velvet is ambitious, fun, and complex in a way that keeps the reader guessing just as much as its titular character. Brubaker and Epting push each other in really interesting ways which compliment each other and give this title a very unique feel in an indy comic market which is becoming saturated with noir genre mish-mashes; however, I feel that this cohesion in the creative team makes a lot of its competition seem like checkers while this one is playing…wait for it, Drew…chess.