Drew: My biggest frustration in dealing with teens is their lack of perspective. That’s probably my biggest frustration in dealing with adults, too, but teens are notorious for blowing things out of proportion. That tendency is exactly what makes teen dramas so volatile — everything is high-stakes for teens — but it’s easy for that volatility to alienate adult readers who know this could all be resolved if any of the characters just sat down to talk with one another. It’s important, then, to occasionally re-ground the stakes in a teen drama, giving readers of any age a relatable touchstone in between the more elaborate flights of fancy. That’s exactly what we get in Archie 6, as a miniature health emergency reminds everyone of what’s really important.

Actually, it doesn’t remind everyone, which is a key point in all of this. Archie has been positioned as a model of morality in Riverdale, and while most of his friends are just as moral, it’s telling what happens as this issue takes him out of commission. Archie’s parents, of course, are at his bedside, as are Jughead, Betty, and eventually Veronica. That leaves a bit of a moral vacuum in Riverdale at large, allowing the world to sink to Reggie Mantle’s level. 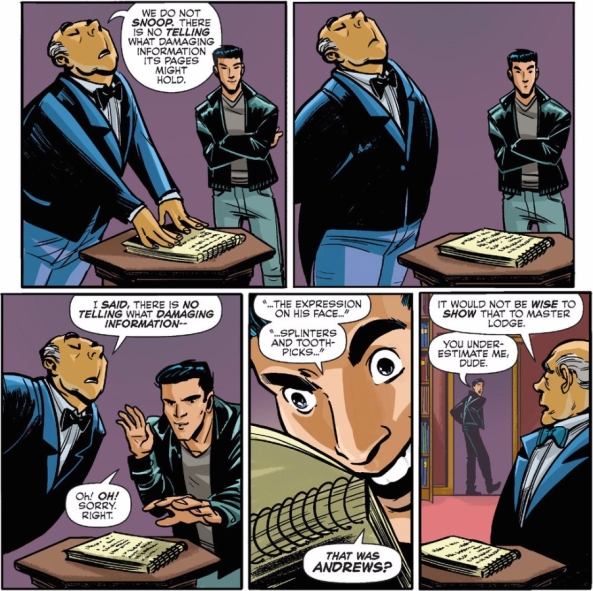 I’m not entirely sure what the butler’s game is here, though I have to admit, I find him rather difficult to read — it’s not until the second time through that I understood his statement/pregnant pause combo to be an invitation to read Veronica’s “private diary.” It seems he may have been convinced by Reggie’s intimation that Archie isn’t all he’s cracked up to be, but he obviously knows snooping in Ronnie’s diary is inexcusable — why else would he let Reggie at the information, rather than just tell Mr. Lodge directly? It seems Reggie’s skeeziness is infectious, and without the inoculating influence of Archie, anyone is susceptible.

This carries over to Reggie’s meetings with Mr. Lodge. Unfortunately for Reggie, he doesn’t even register on the Lodge radar. When Reggie gives Veronica a ride home, he’s mistaken for someone returning the gardener’s car. When he tips Mr. Lodge off about an exposé in the local newspaper, Lodge is equally unimpressed. Reggie doesn’t have anything to offer anyone with real power, so he turns to secrets. Like in any good teen drama, secrets are the only real currency, and Reggie is at the center of a growing economy.

Meanwhile, more innocent secrets are being created with the best of intentions. Betty is quick to come clean about hitting the softball that hit Archie. It’s the most serendipitous of accidents, something no logical person could possible blame someone for, yet Mrs. Andrews assures Betty that this will stay their secret. Why? This can only spell bad news for Betty down the line. I suspect Archie won’t care, but Veronica just might. Actually, the other key development in this issue also focuses around Betty, as the decidedly charming Sayid takes an interest in her.

Sayid doesn’t get a ton of screen time, but his easy chemistry with Betty is clearly paving the way for a love quadrangle of sorts. Archie doesn’t strike me as a particularly jealous guy, but, you know, he’s a teenager. Drama is sure to follow this development. For her part, artist Veronica Fish captures all of the cutesy coyness of their initial flirtation. Actually, Fish is on fire throughout the issue, channeling all of Fiona Staples and Annie Wu’s best contributions through her own cartoony sensibilities.

Taylor! I can’t wait to hear your thoughts on this issue. It’s certainly easy to parse the morality in this one into “good” and “bad” — do you find that refreshing after Betty and Jughead’s meddling in issue 5, or is this a bit too simplistic for you? Also, what’s the deal with Reggie sneaking into Archie’s hospital room to get a photo? I appreciate that it’s more dramatic than just skimming facebook (or pulling out a yearbook), but that was another moment where I didn’t really understand what was going on until the second read-through. Did that work better for you?

Taylor: The picture sequence did seem odd to me and when I first read it I honestly thought it was a dream. Maybe that’s the point however and I’m supposed to feel the same confusion that Archie feels in this scene. Even if that’s not the intent of Fish in this scene, it makes sense when I consider the issue as a whole. Archie, as always is the centerpiece of all the action in the issue and as is almost always the case, he’s pretty clueless about what’s happening around him. Whether it’s a softball about to smack his head or the intricacies of romantic and platonic relationships, the guy just doesn’t have a clue.

Archie’s carelessness, I would argue, is perhaps more damaging than anything Reggie does in this issue. First, he’s totally unaware of his surroundings which leads to his hospitalization. You would think living next to a baseball field would make you always take a look to see what’s up, whether it’s a ball coming for your head or just a deserted field. This act of inattention lands Archie in the hospital which is cause of much concern for his friends and loved ones. It all of could have been avoided had Archie been a bit more mindful.

I know, I know: “Archie isn’t totally to blame for being hit by a softball” (which is a totally valid point), but you have to consider what motivated Betty to hit it so hard in the first place. Betty hates Veronica and the thought of her laughing face gives Betty the superhuman strength to hit the ball as far out of the park as possible. That wouldn’t have happened had Archie been more aware of his place as the center of the Riverdale. Again, Archie’s inability to be aware of who he is and his affect on others indirectly leads to his hospitalization and to the concern of those he holds dear. Further, Archie is so clueless that he views his friends as one-dimensional beings who can either be bought off with food or who will forgive him no matter what. In this way Archie is perhaps acknowledging his place as king of the Riverdale social circuit, but in so doing, he belittles those he claims to be his friends and reduces them to caricatures of themselves. In this way, Archie’s cluelessness about his social standing and his affect on others hurts himself and his friends.

Lastly, Archie is pretty unaware of his spacial surroundings as well. As we are reminded in this issue, he basically destroyed Mr. Lodge’s mansion. Even though this was a mistake, it’s still proof of the destructive power of Archie’s blind procession through life.

Accidents happen, and Archie was even being a good guy here by trying to repair previous damage he had caused on the mansion, but good god, he destroys an entire house and then has the nerve to start dating the very girl whose house he destroyed. Now, the Lodges are obviously no sob story and they can afford to rebuild their mansion 100 times over. Heck, Mr. Lodge is kind of a jerk himself but that doesn’t mean he deserves to have his house demolished. Once again, as with his social entanglements, Archie’s inattention to his surroundings inadvertently causes pain to others.

All of this illustrates the point that Archie is a chaotic force in Riverdale. When I compare these actions to those of Reggie’s in this issue I find the latter’s action to amount to pennies on the dollar. Reggie is conniving, I grant you that, but has he hasn’t hurt nearly the same amount of people as Archie has. When I consider this, the lines of who’s good and who’s evil in this comic become all the more blurry, like a photo snapped in a dark hospital room. Do I side with the man who knowingly does wrong but injures few or the man who knows nothing and injures many? That’s something I think each reader has to make up for themselves.