Drew: There are a number of reasons The Dark Knight Strikes Again didn’t attain the critical and cultural success of The Dark Knight Returns, not the least of which being the insanely high expectations of following up a genuine cultural touchstone, but I think the biggest might be what DKSA reveals about DKR. That is, while fans, critics, and the culture at large tend to believe DKR was all about injecting psychological nuance to superheroes, DKSA suggests that creator Frank Miller’s interests were ultimately in the excesses of the genre — any emphasis on psychology was incidental to Miller’s pursuit of bombast. That’s not an airtight argument, but there’s no denying that DKSA went even bigger, trading the psychology of Batman for the sociology of the Justice League. Those interests are still very much in play in DKIII, though perhaps ultimately to pare the cast down to the key players of DKR‘s final showdown.

While issue 2 saw the demise of Ray Palmer, this one gives us the demise of Hal Jordan. Or, at least the dismemberment of Hal Jordan — that his ring is still out there is one hell of a Chekhov’s gun (isn’t finding a bearer the most fundamental trick the ring can do?). Point is, we’re chipping away at some of DKSA‘s cast all while emphasizing Bruce, Clark, and Carrie. The creative team affords Clark two killer entrances, giving him all the dramatic flair he deserves, but it’s important to note that he never quite gets a whole page to himself — both of those entrances are encroached upon by other panels. Indeed, Bruce is the only character to get a full page to himself, donning the costume for the first time in one hell of a fist-pumping entrance. I could include that page, but I’m actually more interested in the way penciller Andy Kubert emphasizes Bruce elsewhere. Check out the first page of the issue: 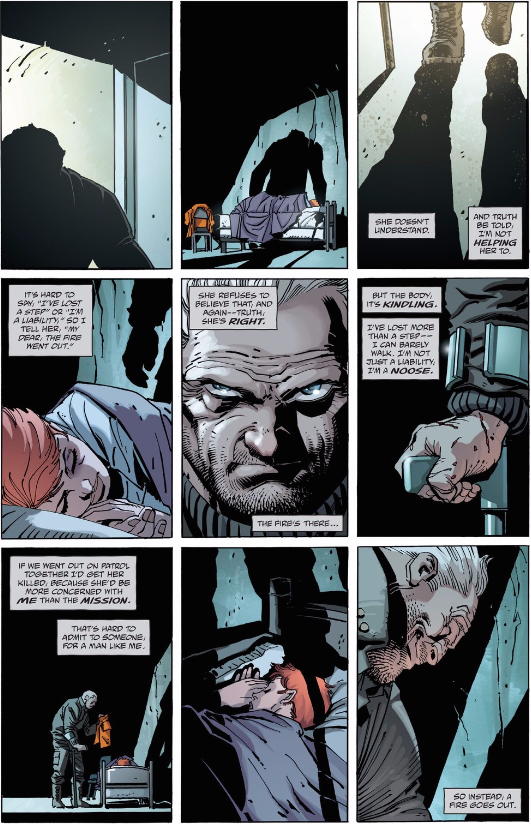 Kubert is a talented storyteller, and every panel effectively points to the next, but I’m more impressed at the way all of them direct the eye towards that central image of Bruce’s face. The play of light and shadow does this brilliantly in the top and bottom rows, but it’s Carrie’s face and Bruce’s cane that does it in the middle row. Remarkably, those images fit perfectly with the narrative — this creative team is working like a well-oiled machine to tell Bruce’s story at every level they can. Clark may get some emphasis later, but there’s no mistaking who the central figure of this story is.

At least, Bruce is the central figure visually. Intriguingly, his narration ends up emphasizing Carrie more than himself. His monologue in the excerpt above is almost elegiac, basically assuring us that he’s out of the fight, but he goes on to detail just how effective Carrie will be without him. Bruce silently praising Carrie ends up being a bit of a runner for the issue, but the addition of Clark and Lara turn the question of legacy into a central theme. It’s easy to start twisting that theme into a meta-commentary on passing the torch from Miller to his collaborators, but I’ll hold off on that reading for now. Still, we also meet one of Green Lantern’s kids, and I can’t help but suspect that Hawkboy might return, as well. We’ll see how that particular theme develops.

For now, it’s enough to marvel at Kubert’s awe-inspiring choices. He really runs the gamut from crystal-clear religious iconography to the horrors of war. Moreover, his layouts run from strictly utilitarian (though gorgeous, as in the nine-panel grid excerpted above) to truly innovative, literally flipping the perspective as Lara is confronted by Quar’s disciples. 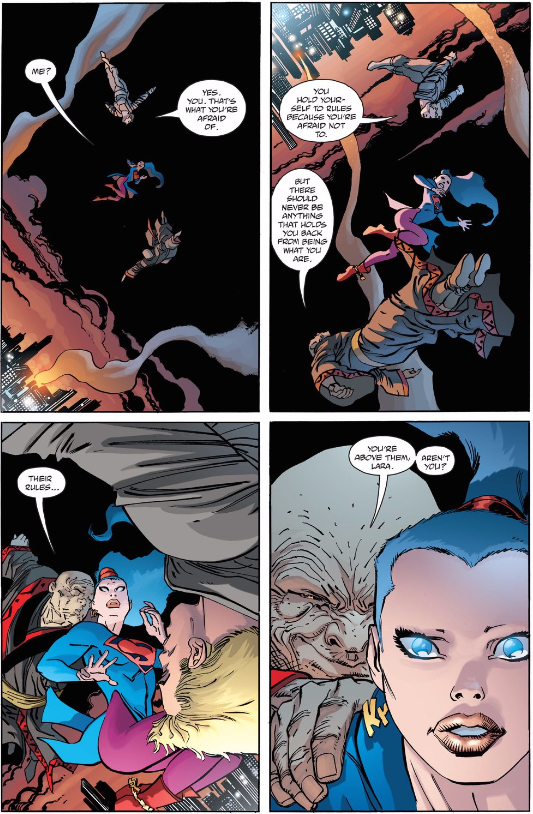 Indeed, it’s his restraint elsewhere that makes this sequence so effective — it’s not until that final panel that Quar and Lara are oriented to one another, locking us into a clear sense of which way is up, even if we can’t actually see what way “up” actually is.

Man, I could talk about Kubert pages all day, so I’ll just cut myself off there. Michael! Were you as impressed with the storytelling here as I was? Also, as a Chicago resident, did you appreciate that little shoutout to the Empty Bottle Azzarello slipped in (even if it was over images of Times Square — complete with its oddly specific Superdry location)?

Michael: The Empty Bottle reference was a bit of a trip — especially since it’s less than a ten minute walk from where I live and am currently writing this response. While I’d say that I’m enjoying it overall, The Dark Knight III: The Master Race is a curious story to me. As Drew mentioned, the visual storytelling is beautiful. Andy Kubert is just rocking it on the artwork as he marries the panel breakdowns that The Dark Knight Returns was known for with his larger-than-life character work. The only time that particular character work falters a bit is when he’s presenting the media reactions from the John Stewart, Bill O’Reilly and Donald Trump placeholders.

Then again, I’m not too concerned with Kubert perfectly rendering real life talking heads when they share the stage with a hulking Bruce Wayne. That image of Bruce and Carrie trudging through the snow is extremely powerful. Carrie leads the way in some Arctic Robin gear while Bruce towers over her — no Batsuit just yet, gotta save that for a big dramatic reveal. Bruce emphasized earlier in the issue that Carrie’s better than him — he still needs the aid of a cane, but that cane is a gigantic sledgehammer. Even at his weakest, Batman is tougher than the rest of us. 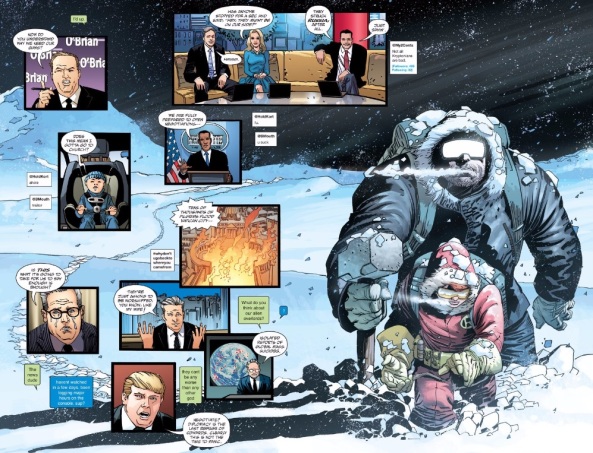 From a visual storytelling point, The Dark Knight III: The Master Race 3 is great — I don’t know if I’m completely sold on the narrative itself however. My gripe with this issue (and series overall) is that it so very badly wants to have its cake and eat it too. DKSA was batshit crazy; which really isn’t that surprising. Miller took the smaller stage of Gotham in DKR and escalated it to a planet-wide, Justice League level event in DKSA — psychology to sociology, as Drew said.

And though DKIII is playing with those same planet-wide stakes — what with its Kandorian crazy gods — it’s also playing it safe. DKIII is reactionary in the way that it is doing its damnedest to be the next part of “The Dark Knight Saga” instead of the story that picks up after DKSA; that’s intentional. I don’t believe this more approachable story resides in the same world as the book that regularly featured superhero sex workers called “Super Chix” and a psychotic Plastic Man defeating enemies by egg scrambling them and flushing them down the toilet he morphed into. I’m not a DKSA apologist — it’s simultaneously terrible and amazing in its crazy — but I don’t like how DC is seemingly trying to sweep it under the rug. They’re the ones who let a crazy old nutjob come back and Sin City-fy the world he helped make. Then again, it’s hard to know exactly what his role is in this collaboration. 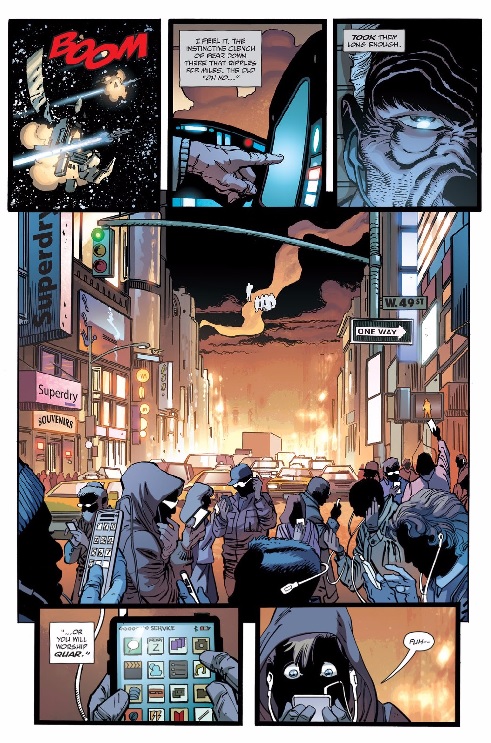 That’s the maddening divide of reading The Dark Knight III: The Master Race: whose words are these? Whose message is this? While it’s kind of deflating to know “The Master Race” are the Kryptonians attacking Earth (yet again), I won’t deny the modern relevance/poignancy of their methods. The world has been robbed of their technology, with the Kandorians destroying the “false masters” we created. We are slaves to our technology — it’s an undeniable and terrifying fact. This leads me to the interesting notion of the difference of the respect you have for a story and the respect you have for a storyteller. When I think about this techno-jab coming from Azzarello’s mind I’m on board with the idea. However, when I imagine this being Miller’s idea I’m less comfortable with the implications. Miller’s recent political turn aside, the media commentary has always been in the DNA of his Dark Knight books — not to mention how scary it is that he basically predicted social media. I’ll be very curious to see if/how Azzarello/Miller manage to keep that media commentary going. Ya know, at least until Superman fixes the satellites.