Spencer: I grew up on shonen anime, so “the power of friendship” has been a beloved trope in my life for as long as I can remember. It’s nice, then, to find an American comic so willing to embrace the idea; the power of friendship is so engrained into The Unbeatable Squirrel Girl‘s DNA that sometimes that friendship even comes in the form of Squirrel Girl’s time-displaced counterparts! Yeah, this issue is a zany romp full of complicated time travel shenanigans, but its heart beats with the same moral that has come to define this series: that victory is achieved, not through violence, but by reaching out to, and learning from, others.

I appreciate that moral even as an adult — I’ve been leaning on my friends rather hard these past few days (thanks, Patrick), and in the middle of an election cycle so thoroughly defined by hateful, exclusionary rhetoric, it’s clearly a lesson the world needs more now than ever — but looking through The Unbeatable Squirrel Girl 5‘s letter page also makes me appreciate how appropriate this is for young readers. It’s not the only lesson Ryan North and Erica Henderson sneak into the issue — there’s also a really cute push for STEM academics, a discipline young women have been routinely underrepresented in, that I greatly appreciate.

The story itself finds the elderly alt-future Squirrel Girl revealing the source of Doreen and her friends’ time-displacement: a computer science student named Cody who stumbled across a time-travel gun and started sending his classmates back to the past in order to raise his own sagging grades. Inspired by her counterpart, Doreen eventually foils Doom’s plan by using Cody’s gun to assemble dozen of time-displaced Squirrels Girl (see, I read the alt-text!), overpower Doom, and force him to restore the timeline to normal!

This plot reinforces the power of friendship in a number of ways: Tippy-Toe and Nancy come up with an idea to deter civilians and preserve the timeline, and Nancy is the one who understands Doreen’s code and repeatedly zaps her back into the past when the time comes. Most important, though, is the “friendship” of Doreen’s time-displaced counterparts. Yeah, at first that seems counterintuitive to the message — Doreen’s still essentially defeating Doom by herself, right? — but even here there’s a stark contrast between Doreen and Doom. Doom is a solitary figure, surrounded by robots he’s made in his own image programmed to do only his will, but Doreen’s counterparts come to her aid willingly. Doreen doesn’t treat them as weapons or as a resource — she’d clearly be friends with them all a zillion times over if she could.

Moreover, Doreen learns from her counterparts — as I said, even her plan to create the counterparts seems to stem from old-alt-future-Squirrel Girl’s arrival in the past to begin with. Actually, being willing to learn — either learning from others or simply learning in general — seems to be another central theme of this issue. Yeah, Doctor Doom is smart enough to create his own programming language based solely around the word “Doom,” but by relying only on his own genius, he misses out on facts that Doreen and her friends are able to use against him.

Knowledge is power, quite literally. This ties in with that STEM lesson I mentioned earlier, but also to the idea that, no matter how much we know, there’s always something valuable other people can teach us. We should never stop learning, and that’s a lesson everybody would do well to take to heart.

For as much as I’m throwing the words “lesson” and “moral” around, though, this issue is decidedly not preachy. I mean, Doreen explicitly invokes the power of friendship more than once, but North and Henderson’s humor brings levity to even the most obvious teaching moments. Also adding to this issue’s fast, fun pace is the way North and Henderson subvert typical comic book and time travel tropes, putting a fresh spin on some familiar ideas. “Science vision” is a fun way to poke fun at the collateral damage of most superhero battles, and North gets quite a bit of mileage out of the ol’ “grab a newspaper to see what date it is” bit by diving into the backstory of the newspaper’s owner, but my favorite moment is the one that subverts the idea of chatty superheroes. 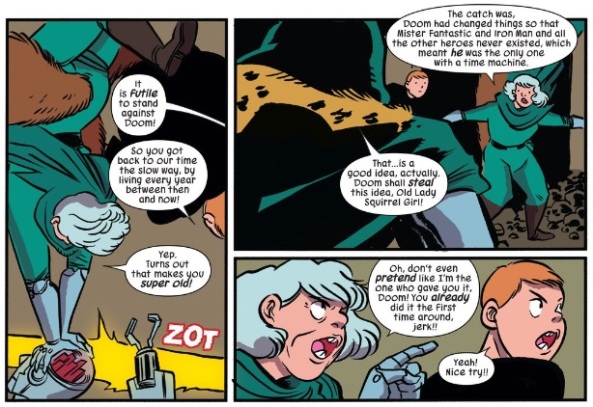 Talking is kind of treated as a free action in comic books — characters can spout whole monologues while launching a single kick, and rattle off elaborate backstories and motivations to their allies without the enemy ever interfering. This scene starts out that way until, surprise!, it turns out Doom was listening the entire time. This happens again a few pages later, and I got a big kick out of both instances.

The only problem with this joke, though, is the idea of Doom, whose entire plot in this storyline revolved around his solitary, elitist nature, stealing ideas from Doreen. Does that betray his role in this story? It might appear that way at first glance, but I don’t think so; it just highlights Doom’s hypocrisy. As much as he may proclaim his own superiority, he’ll gladly steal a good idea when he hears it — and no doubt if he got called out on it, he’d find a way to make it sound like it was his idea all along. Whadda jerk!

Taylor, The Unbeatable Squirrel Girl‘s always a blast, but I found this issue to be particularly clever. How about you? What were your favorite gags? And did you have anything to add about the artwork of Erica Henderson and Rico Renzi? There’s some particularly wonderful panels in this one (gotta love that Doreen/Old Doreen high five), but I think I loved the various outfits of all the counterpart Squirrels Girl the most. That no doubt took a lot of work and research on Henderson’s part, but it looks like she had a blast coming up with those fashions.

Taylor: I’ve never found the time to really comment on Henderson’s artwork before. That’s never been purposeful; I think she’s done an awesome job on Squirrel Girl and I think her representational style works incredibly well with North’s humor. One thing I’ve always appreciated about Henderson’s artwork in particular is the way she animates Doreen’s facial expressions. Doreen has one of the more recognizable faces in the Marvel universe and it’s not just because of her teeth. Henderson obviously takes special care to make sure Doreen’s expressions always match up with her speech and that each panel is different from the last. This aspect of Henderson’s art, if you were to forget everything else, makes it always fun to read.

In this issue Henderson has her hands full when it comes to animating Doreen’s facial expressions, however. The reason? time travel of course! As Spencer mentioned, Doreen defeats Doom by enlisting the help of herself from different times. The result is several Doreens in one place which is great fun for the reader but a lot of work for Henderson. Henderson steps up to the plate when faced with the challenge though. Her ability to animate Doreen’s face comes in handy pages such as the one below.

As Doreen collects more and more selves, the panels on this page get more and more crowded with Squirrel Girls. The gag is funny in and of itself, but what really makes it for me is looking over all of the various expressions on the Doreen faces. The emotions run the gamut of perplexed to angry to thrilled. It makes all of these Doreen’s feel unique and individual. This reinforces the idea that Spencer talked about Doreen recruiting friends instead of making Doombots. If Doom had been doing the same thing Doreen is doing here, the page would look vastly different. It would be all green and steel, regimented, and with one unsmiling expression. The mess that is the Doreen’s is unbridled and everything that represents Squirrel Girl. In short, it’s a perfect reflection of her character.

Also the “Doreen Timeline Visualizer” gag is just awesome. It effectively serves three jobs on this page. First, it breaks up the panels in a fun and interesting way. Second, it ostensibly helps me visualize all of the time travel trips Doreen is taking. Lastly, it’s a perfect visual analogy to Doreen’s hodgepodge plan. It’s messy, colorful, and chaotic, but ultimately fun and successful. Just like Doreen herself!

I also agree with Spencer that “friendship” is the theme of this story. More specifically, I think the theme runs something like “friendship is useful for helping you out in tough times.” Spencer showed us that much is true with the story of Doreen and Doom already. However, this theme pops up elsewhere in the issue; the whole reason the conflict of this story exists is because Cody is a loner without friends. Just check out his reason for sending people into the past in the first place:

Sure, sending people to the past to adjust the curve in your class is a hilarious reason, but it’s also inherently sad. If Cody had relied more on the help of others he could have brought his grade up in class ways less intrusively than basically abducting his classmates. Poignantly, we’re shown that Cody sits right next to Doreen and Nancy, the “other students getting the high grades” during class. As we know, Doreen lives to help people. Had Cody just asked for help from Doreen or Nancy he surely would have received it. All it would have taken is an extension of friendship on Cody’s part and all of this trouble could have been avoided. Instead, like Doom, Cody chooses the path of the loner and everyone is the worse for it. Long story short, friendship is magic!

I would just like to echo the sentiment that part of what makes Squirrel Girl great is the positive message it sends to its readers. A lot of comics these days explore the darker side of heroing, so it’s refreshing to see a hero still fighting the good fight. In that respect, this comic is unique — one of the many reasons that makes it fun to read every month.