Patrick: Every couple years, Drew and I end up having a conversation about the “death of irony” or the “death of sincerity” and every time we have it, we’re basically blowing smoke out our asses. Concepts like “irony” and “sincerity” need not be mutually exclusive – in fact that’s where most genre fiction rest: comfortably in both camps. A superhero comic in 2016 wears the trappings of a superhero comic because its creators and its audience simultaneously love and are bored by those trappings. That puts a character like Deadpool in a tricky spot, when it seems like his mission statement is to subvert what is gradually becoming the insubvertible. Deadpool’s popularity almost works against him in this regard – how can you continue to classify him as a misfit underdog if everyone loves him? And then there’s the wildly successful Deadpool film, catapulting audiences acceptance of the Merc with the Mouth to meteoric heights. Writer Gerry Duggan and editor Jordan D. White act as Deadpool’s tonal shepherds in this series, keeping the character’s aims purely subversive, the key difference is that the subject they’re subverting is no longer as broad as “comics” or “superheroes” or “the 90s” – the subject is Deadpool.

Apologies up top for immediately making reference to the Deadpool movie before I’ve begun any real analysis of this Deadpool 8. I do sometimes think that the relationship between the comics and the films can be interesting — especially where it seems like characters or concepts are being rearranged for business reasons — but that seldom plays into what the issue itself is expressing. As readers, we should be able to give the benefit of the doubt to the comic itself as worthy of making it’s own statements, independent of what’s happening in other mediums. But Deadpool isn’t like other comics. His fourth-wall-breakery practically demands that the reader take all versions of the character into consideration. Tellingly, Lil’ Deadpool refers to himself as “The Merc with the Movie.” As far as I’m concerned, not only is extra-textual analysis fair game, it’s encouraged by the book itself.

Another thing that Lil’ Deadpool lays out pretty clearly is that Deadpool is on a revenge quest against Sabre Tooth for murdering his family, when it’s really Deadpool that did the murdering. Aside from a little lip-service to the Mercs for Money, the whole issue tracks Deadpool’s path of revenge, which the creators make a special point to let readers know is unfounded. I can’t help but see a parallel to the plot of the movie: Deadpool seeks revenge. The movie makes Ajax — the villain and revenge-subject — impossibly evil, so it’s almost impossible to hold Deadpool’s actions against him. Sure, he’s a crass, violent, trigger-happy motherfucker, but at least he’s killing someone worth killing. But Deadpool 8 sings a different revenge tune, one that’s filled with sour notes.

Let’s start with Wade’s state of mind, which Duggan and artist Matteo Lolli depict through visions and ghosts of the characters that helped form Deadpool’s particular brand of mania. First up is Madcap, whose memory is still very fresh from issues 1-5. It’s unclear what we’re supposed to make of Madcap’s appearance, but all he does is trash Deadpool’s actions, trivializing the suffering he experienced at Butler’s hands and even razzing Deadpool for finding a clue.

Look at Madcap’s body language! It’s so patronizing and so good. But what does that make Madcap? A critic? A satirical voice? It’s hard to say, but we can compare his appearance to Sabretooth’s cameo later in the issue.

Though, that scene takes more than a little unpacking all on its own. Deadpool takes a trip up to Canada to find some information / try to job his memory, and Lolli tosses clarity out the window as the scene seemingly cuts freely between the past and the present. Colorist Ruth Redmond gets in on the ambiguity, going halfway towards establishing a color scheme for “the past” – a light blue palette sets off the flashback, but Deadpool remains (frustratingly) stuck in the warm reds of the present. As the scene progresses, Wade wanders into a comedy club where these past and present color schemes butt up against each other not just on the page, but within individual panels. It’s only then, when the past and the present is a super-duper mess that Sabretooth appears and mocks Deadpool again. 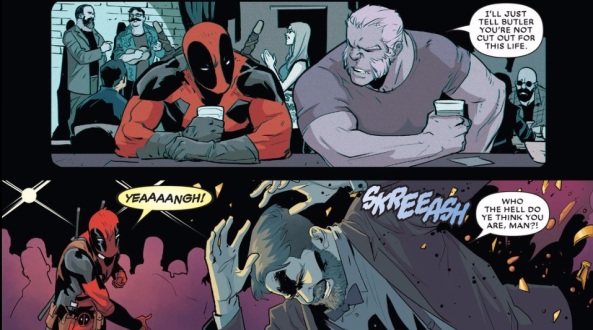 Incidentally, that’s writer Gerry Duggan (with the beard) and editor Jordan White (with his telltale ukulele) on stage in the background. We’re seeing the DNA of Deadpool on display here; White + Duggan + Sabretooth + Madcap = Deadpool. And those elemental components of Deadpool introduce a lot of doubt into the character.

The issue also doesn’t shy away from the unpleasant aspects of Deadpool’s quest for justice. Not only does Deadpool send someone(s) to the hospital, he continues to interrogate his marks while they’re being hauled away in an ambulance. And then Deadpool lays out the particularly gruesome details of his clothes-line garotting plan, and his carefree revengerama sounds like much less fun than he’s trying to convince us it is.

Taylor, to me, this reads like a pretty harsh criticism of revenge fantasies, but it’s also hard to deny that I do have fun rooting for Wade. I don’t expect Deadpool to be able to chastise me for my pretend-blood lust, but that’s exactly what I’m seeing here. Oh and did you like seeing Agent Adsit recovering from his brutal beating in issue 4? Brutal beating!

Taylor: Patrick, I don’t blame you at all for rooting for Wade in his quest for revenge, no matter how how wrongly it’s directed. Basically the whole conceit of Deadpool the comic and Deadpool the character is that he’s someone who does awful things but it so witty we can’t help but root for him while he does it. I think when Deadpool is doing this, is when it is at its best. It seamlessly conveys a message while also entertaining the hell out of me.

So what’s the message of this particular issue? As with a lot of previous Deadpool issues, this one delved into the issue of violence and our relationship with it our media. When Deadpool finally locates Sabertooth, he tries to take him out by decapitating him with the old razor-wire vs. motorcycle trick. Hilariously, he got the idea from Logan (Wolverine) when they were discussing possible ways that Logan could actually be killed in a meta-conversation most Deadpool fans have probably already had with their friends. Logan thinks the plan would be hogwash but that doesn’t stop Wade from trying it out on Sabertooth.

Horrifyingly, just as Logan predicted, the razor-wire fails to decapitate Sabertooth and leaves him bleeding profusely from his neck. Yet despite the disturbing scene in front of him, Wade cracks a joke with a disgusting simile and self-deprecating humor. And damn, if I don’t find it funny, even if the scene is really awful. This is where the message of this comic sets in. Wade is so witty that I often overlook the horrible things he does. If anyone else had done to Sabertooth what Wade did, I would condemn the violence, but with Wade it’s different. Somehow the humor makes the violence seem not quite as bad. When this happens I have to go back and question my whole moral code in a way. If I so easily accept violence because of Wade’s humor, does that mean I’m saying it’s okay? I’m not sure and here isn’t the place to discuss that. However, I commend Deadpool for always managing to sneak in these heavier themes to seemingly humorous plots.

Lest you think I sympathize with the puritanical leanings of the Parents Television Council and have no sense of humor, there are scenes in this issue that are just outright funny. After Wade roughs up Michael Logue and one of his thugs, he finds himself in an ambulance with the former on the way to the hospital. As Wade interrogates Logue, we realize that the henchman Wade roughed up earlier is actually in the van as well.

Things end as you would expect for this henchman especially given that he had the gumption to interrupt Deadpool. What I love about this scene is the use of irony, which is something Patrick mentioned earlier. Part of what makes this such a funny scene is that for several panels we have no idea that the henchman is in the ambulance at all. It’s like dramatic irony, where the reader knows something that characters don’t, only in reverse. Wade and Logue know the henchman is in there but give us no clues about this knowledge until the henchman says something. This scene is scripted perfectly and Matteo Lolli draws it perfectly with clever angels that never let us see that the henchman is in this cramped space with the scene’s main characters. More can be said about how the henchman still has Deadpool’s sword in his shoulder and the cut from the reveal of his presence in the ambulance to his exit from it. However, nothing needs more be said about that. The scene is supremely effective and works well enough on its own.

And hey! Agent Adsit! Good to see him back and fully recovered. Amazing what a couple months can do!