Spencer: By this point in my life, I’ve consumed plenty of media where the main characters weren’t in the right, or perhaps where the audience is even meant to root against the protagonists. Still, despite all that experience, I tend to give my main characters the benefit of the doubt; I like to believe I should be rooting for them, and that they at least believe they’re doing the right thing, until I’m unequivocally proven wrong. Things haven’t gotten dire enough yet to turn me against the Inhumans by any means, but All-New Inhumans 5 does mark the point where I’m starting to question, if not their motives, then certainly their methods.

Let’s start with the “B” Plot: Gorgon, Ash, and Naja attempt to “rehabilitate” Jack, but their attempts mainly involve locking Jack in the Inhuman equivalent of the Danger Room, constantly teleporting in new weapons to attack him with the hope of getting Jack to embrace his Nuhuman adaptation abilities. I have a few issues with this, but the primary one may just be the fact that Jack once belonged to a xenophobic, anti-Inhuman terrorist organization, and thus Gorgon and Naja have little interest in treating him with any sort of respect or dignity. Instead, they taunt him every step of the way. 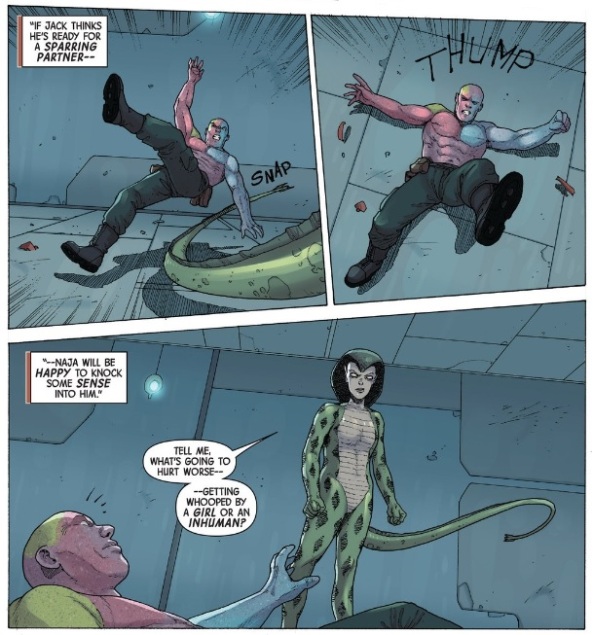 Now don’t get me wrong, I’m all for crapping on racists, and under any other context would probably be cheering Naja on right here. But the whole purpose of this exercise is to get Jack to understand and control his transformation, and I don’t know if egging Jack on, wounding his pride, and reminding him that he’s become everything he hates is the best way to do that. It’s an issue that the Royal branch of the Inhumans have been facing since the Terrigen Cloud was first released — how do they protect the Nuhumans and help them acclimate to their new abilities and heritage without forcing them into a lifestyle they may not even want? Should the Nuhumans change their lives to become part of the Inhuman nation, or should the Inhumans evolve in order to better facilitate the various needs of their new brethren?

I’d certainly vote for the latter, and in many ways I think that’s exactly what the Inhumans have been trying to do (albeit not always enthusiastically), but they’re clinging a bit harder to stubborn, traditional methods when it comes to training Jack. Clearly, those methods aren’t working.

I certainly believe that Jack could be redeemed, but not like this. This is a guy who essentially believes that his life ended when he became an Inhuman, and has been trying to kill himself ever since (unsuccessfully, thanks to his abilities). Getting him to embrace his abilities would be a massive shift, and one that needs to be achieved with subtlety and patience. Instead, Gorgon essentially uses a blunt instrument to train Jack, and it backfires. Jack’s not entirely wrong: sure, being an Inhuman doesn’t make one a monster, but Gorgon is trying to mold Jack into what he wants Jack to be, and that plays into all of Jack’s worst fears about the Inhumans — that they’re trying to change people and turn them into something that they’re not. I can’t think of a worse message to send to Jack.

Jack’s escape lands him in the massive Inhuman armory, and that too plays into Jack’s worst fears about the Inhumans’ motives. As readers, we’ve been able to see the enemies the Inhumans must deal with and the persecution they face, but all Jack (or the fearful average Joe on the street he can so easily represent) sees is a massive force ready to make war.

In harmony with that, throughout the rest of All-New Inhumans 5 James Asmus and Andre Lima Araujo focus on the negative perceptions many have about the Inhumans and the way that, even when they have the best of intentions, they might be playing right into those perceptions. Or, perhaps it’s more accurate to say that someone is trying to set the Inhumans up, and making their otherwise fairly safe and reasonable methods look dangerous. Let’s take the Skyspears, for example: these things have the power to supercharge Inhumans and the range to reach 99% of the world’s population. What will be the result when they eventually activate? Who knows, but what seems certain is that, even though the Inhumans aren’t behind the Skyspears, they’ll absolutely be blamed for it. Whoever’s responsible for these spears seems determined to use the Inhumans and then let them take the fall.

It doesn’t help that violence seems to follow the Inhumans wherever they go. Asmus makes it clear that this isn’t at all a problem unique to the Inhumans (Spider-Man points out that it’s just part of being a superhero), but it still makes people nervous. Parker Industries and even Grid, a Nuhuman himself, are uncomfortable with the violence the Inhumans sometimes incur, and the People’s Defense Force of China are so livid about a past encounter with the Inhumans that they march right in and forcibly break-up Crystal’s research party.

Crystal knows that the Inhumans, as they are now, weren’t responsible for harming the Defense Force, but they’ll hear none of it — they’ve already made up their mind, and in the face of that, Crystal’s explanation just looks like her making excuses.

So what’s the solution here? There’s very little the Inhumans are actually doing “wrong,” but could they do more, change their methods to change the way people perceive them? Or, people being the sheep they are and with someone trying to frame the Inhumans, is that a responsibility that shouldn’t be laid at the Inhumans’ feet? I’ve got no clue, but I imagine we’ll start to find the answers as this arc continues.

Patrick, did you find yourself getting a little ticked-off at the Inhumans throughout this issue as I did, or do you get where they’re coming from? Also, does this guy remind anyone else of One Punch Man?

It’s all I can think about when I see him.

Patrick: I don’t have too much patience for any of the old guard when it comes to the Inhumans. Nu all the way, baby. Character’s like Gorgon are frequently monsters, and his behavior with Jack is no exception. You could argue that the OG Inhumans are giving these new guys a bad name. Is it any wonder that Jack wouldn’t want to identify with this group? All he knows of them is what he learned about the version of these guys that are violent, imperialistic assholes. Ditto the Chinese heroes, who immediately cite the violence brought on by Black Bolt the last time he was in town. Those aren’t the actions of Flint or Grid, but they will be held accountable for those actions.

There may not be enough textual evidence to make this claim, but I almost feel like that’s a statement about the shadow that modern Inhuman comics have to get themselves out from under in order to be considered as their own property. Among fans of the Fantastic Four, the word “Inhuman” is always going to mean Medusa and Karnak and Black Bolt, and not this fresh cast of new X-Men-esque characters. Which, of course, is a damn shame, because a lot of these newbies have got legs.

Asmus and Araujo get this too. Check it out: we only see Nuhumans demonstrating their powers in this issue. None of those old-timers do anything. I love seeing Flint create a floating stairway of rocks so the Inhuman envoy can descend from the R.I.V. – it makes his power appear as elemental and instrumental as Storm or Magneto, or one of those indispensable mutants.

That’s a beautifully composed image, by the way – that low angle goes a long way toward selling the godliness of their descent (and the Christian boy inside me can’t not see that there’s a trinity of heroes coming down from heaven). We also get near-constant demonstration of Grid’s powers, which may not be a as spectacular, but his powers are a meaningful expression of the character’s psyche. He’s an engineer — a machinist with no hands, unless he manipulates metal to fabricate artificial appendages. They’re both examples of Inhumans using their powers to express either a) their heroism or b) their humanity.

Which brings me back around to Jack, who may be expressing c) his villainy. It’s odd to me how disconnected his R.I.V. Danger Room training sequence is from the rest of this issue, but I think he’s stumbling on evidence that confirms the fears he shares with the Chinese heroes. What happens when Jack, scared and unkillable, brings all those weapons out to play? Well, then the Inhumans are just as dangerous as they’re accused of being.