Drew: The owner of my old LCS, Paul, was not a Batman fan. In his mind, a billionaire using his resources to “punch bad guys” was so misguided as to be immoral. Couldn’t Bruce Wayne do more good resolving the root causes of crime by building mixed-income housing or running programs for at-risk youth? Admittedly, Batman’s “punch bad guys” solution to crime lacks nuance, and seems increasingly outmoded the more we understand what causes crime in the first place. Unfortunately, it’s kind of key to Batman’s appeal — he can be a philanthropist on the side, sure, but nobody wants to read a comic where a guy dressed like a bat subsidizes grocery stores in low-income neighborhoods. To writer Scott Snyder’s credit, he started his run on Batman by having Bruce turn his attention to exactly that type of socioeconomic solution, a goal that forces within Gotham actively worked against. It was a smart move, but the fact that the Court of Owls would allow Bruce to be Batman, but drew the line at him rearranging the economic structure of Gotham speaks to just how ineffectual Batman is at affecting systemic change. With Batman 50, Snyder offers a more compelling justification for Batman — one that just might be the definitive answer to Paul’s criticisms.

It all comes down to Jim Gordon’s closing monologue, where he ruminates on why we care about Batman when he only fight’s monsters and supervillains instead of what he calls “real things.”

Those are exactly the things that Paul always complained about Batman ignoring. Gordon’s explanation here, that Batman is “not real,” might seem like a kind of deflating meta-commentary — Batman can’t solve your real world problem’s because he’s a fictional character — but Gordon goes on to explain why he can still be valuable. Indeed, his explanation, that Batman “fights our nightmares to teach us to fight the real terrors by the light of day,” isn’t just a defense of Batman, but of the whole of fiction. Batman can’t solve economic disparity any more than Harry Potter can, and forcing either to address those issues in-narrative might actually lose what magic they have to inspire us to make the world a better place. I know that sounds like optimistic nonsense, but recent studies have shown that reading fiction can actually make us more empathetic.

But I want to pull back for a second. I get that Batman pulling a Pacific Rim on a giant-sized Mr. Bloom is absurd. Indeed, I accept that all superhero stories are inherently absurd. What I don’t accept is the notion that we can dismiss them because of that absurdity. All mythologies are absurd, whether it’s a magical sword in a stone, or a dude turning water into wine so somebody’s wedding runs smoothly. Honestly, I don’t think anyone benefits from quibbling about the believability of those stories, because the point isn’t that we believe them — the point is that they inspire us. In the case of superheroes, they inspire us to self-sacrifice, to stand up for our fellow man, and to make the right (if sometimes difficult) decisions.

And I think that’s Snyder’s point here. For all the bigness of this storyline, the core truth is as simple as our understanding of what fiction is: Batman is “not real.” You can’t be him, I can’t be him, even other fictional characters can’t be him. Moreover, the problems that he fights are not real. Sure, he doesn’t take up the task of fighting real problems, but that’s because he isn’t real. Let him fight the “monsters or damn super-villains”; we have to tackle reality. His job isn’t to solve our problems, but to inspire us to solve our own.

It’s a powerful message, but one I suspect might be equally true of all other superheroes. I suppose if there’s anything unique to Batman here, it’s the presumption that anyone could be Batman — we don’t quite have the same associations with superpowered heroes. Of course, that leaves a bit of a paradox surrounding Snyder’s point: if this is a story that only works with Batman, doesn’t asserting that we can’t be him rob him of that uniqueness? That’s kind of a half-baked thought that I don’t have a good answer to, but I’d love to hear folks’ thoughts in the comments.

I’m also not sure what to make of the “strange star” that drives much of the action of this issue. Batman observes that it has “the power it’d take to create a viable strange matter reaction,” but the notion of creating strange matter doesn’t crop up again until the end of the issue. At that point, Gordon is drawing parallels to Gotham, calling it “an ‘island of stability‘…where brave new things are made.” Is Gotham the strange star — something large enough to grow new things, but potentially so large to threaten destroying everyone nearby? Again, I’m not sure, but I’d love to hear your thoughts.

One thing I do know is that the entire creative team clearly had a blast putting Bruce back in the cowl. Snyder emphasizes that Bruce has literally never felt better as Batman, but the art team of Greg Capullo, Danny Miki, and FCO Plascencia absolutely steal the show:

Maybe being “real” doesn’t matter when you’re this badass.

Michael, I realize I’m leaving most of this issue on the table. Do you have any thoughts on any of the questions I mentioned? Or maybe more specific praise for the art team than “badass”? Or maybe you have some meaningful thoughts on Daryl’s reveal as the man kind of responsible for Bloom — I left that out because I really didn’t know what to say. Or, you know, you could just talk about Batman’s new suit.

Michael: Drew, like most times, you are speaking my language my friend. I think that your questioning the paradox presented here — that anyone can be Batman, but also that only Bruce Wayne can be Batman — is completely valid. I don’t think that that particular quagmire can be solved by any logical reason; it’s on the same level as “Batman always wins because he’s Batman.” Nevertheless it serves as a good jumping off point for me and embodies a lot of what Superheavy has turned out to be as a whole.

Batman 50 is a packed finale: the return of Bruce Wayne Batman, the revelation that Daryl inadvertently created Mr. Bloom and the heroic near-sacrifice that Jim Gordon makes to take down Bloom once and for all. What connects all of the story dots however is the overarching theme of power — who has it and what they do with it. There are a couple different types of power being emphasized in Batman 50, but most of them are examples of power levels that are inherent and not exactly quantifiable. I’d include the strange star in here too, simply because it’s devastating powers are implied more than defined. All of the characters in Batman 50 want to empower the people of Gotham: Bloom, Daryl, Geri Powers and our Batmen — albeit with different means and intentions.

The character of Gotham City is one that has permeated all of Snyder’s Batman work. Gotham: the immortal hero and villain of the world of Batman. But Gotham City isn’t just an undying behemoth because a city is its people. There have been different men under Mr. Bloom’s mask and many more under Batman’s mask; but it’s the people underneath those masks that define them as symbols and its the people of Gotham who define it as a city. It’s a story we’ve seen in countless Batman tales on screen and on the page: the people of Gotham tear themselves apart at the behest of a madman but put themselves back together under the symbol of Batman.The people of Gotham are responsible for the chaos caused by Mr. Bloom’s seeds but they’re also responsible for returning the balance of power once they know that their true Batman has returned. I’m not exactly on board with “the will of the people” overthrowing Bloom, but it’s a powerful concept nevertheless.

I’ve expressed my concerns of Gordon’s time under the cowl being not fully explored or realized in numerous write-ups but was pleased to see that Bruce’s return didn’t overshadow Jim Gordon’s last outing as Batman. Sure, our traditional Dark Knight came in to rescue Gordon in stupendous fashion, but he wasn’t the one to take down Mr. Bloom in the end — nor should he be. It would’ve felt like a cheat if Pacific Rim Batman just swooped in and won the final battle while Gordon fought the whole war. Batman even says as much to Jim when he talks about Mr. Bloom being Jim’s “monster.” 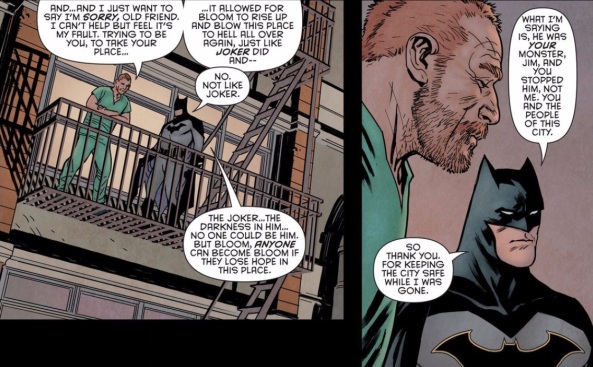 Batman refutes the notion that Mr. Bloom is another Joker; which in turn is Snyder refuting what many Batman readers have been suggesting. While Mr. Bloom might not have the “darkness” of the Joker, he was the archnemesis of Gordon-Batman for all intents and purposes. The fact that we never really find out who Mr. Bloom is under that mask adds to his Joker-ness, as well. Snyder does so love for his heroes and villains of Gotham to mirror each other, so it’s no surprise that Batman says that anyone could be Mr. Bloom. The combination of “anyone can be Batman” and “anyone can be Mr. Bloom” are seemingly incongruous but the intended message is clear: we all have the potential to be a hero or a villain.

Which brings me to the Daryl of it all — a revelation that was equally surprising and random. The little snippets of Duke’s storyline in Superheavy never really tracked with me; they seemed like a distraction. I suppose they pay off here while simultaneously giving us a little more insight into Mr. Bloom’s origins and developing Daryl’s character. I see Daryl as an inversion of Gordon in a way: Gordon happily hands the role of Batman back to Bruce Wayne whereas Daryl feels like his chance to make a difference was stolen by Mr. Bloom. Bruce is proud that Gordon has carried the mantle of the Batman so well, but Daryl’s legacy has been “bastardized.” Also, Daryl could be a monster version of an angry fanboy who doesn’t like what’s happening with their favorite characters. Maybe.

I always get so caught up in the symbolism of Batman that I leave little room for the art. As for Batman’s new costume? I’m a fan. I like when batsuits are bold and different, and I’m super behind the purple trim of Batman’s cape. I love that Snyder, Capullo, and FCO have brought purple back to Batman, inspired of course by The Dark Knight’s original glove color. I’m gonna theorize a little further, however: since Batman and Joker experienced their dionesium death and resurrection, maybe Bruce came out on the other side with Joker’s affinity for the color purple? No? Ok. Nevertheless FCO’s ultraviolet colors have been a huge part of Batman’s success as a book, bringing a whole different level of energy to the traditionally drab Gotham City.

All in all, Batman 50 was a fitting conclusion to Superheavy for our boy Jim Gordon. It disheartens me a bit to see how Jim feels like he just made a bigger mess of things despite the fact that he saved the city. I suppose that’s just Batman for you — never satisfied.