Mark: I came into Grayson 18 unaware of the creative change-up behind the scenes, but it’s immediately apparent that this is a different team than the one that has guided Grayson through the past year and a half. Yes, Tom King, Tim Seeley, and Mikel Janin have departed in preparation for Rebirth, leaving new writers Jackson Lanzing and Collin Kelly to wrap up the last three issues with the help of artists Roge Antonio and Geraldo Borges. And while Grayson 18 definitely reads like a lesser issue, Lanzing and Kelly do well enough in beginning to bring Grayson‘s many disparate threads together.

Unfortunately, the same can not be said for Antonio and Borges.

I tend to not write much about the artwork of the issues we discuss here, mostly because I know very little about the mechanics of art so my commentary is usually of the pithy “I like this” or “I didn’t like this” variety. But I want to take a moment to praise the work of Mikel Janin, who consistently knocked it out of the park on Grayson, and whose absence is keenly felt here. One could reasonably read through this issue and not realize King and Seeley weren’t behind the words, but it’s immediately apparent that something is…off about the art.

It’s not all bad. There are moments where Antonio or Borges nail the look, like Midnighter’s arrival. 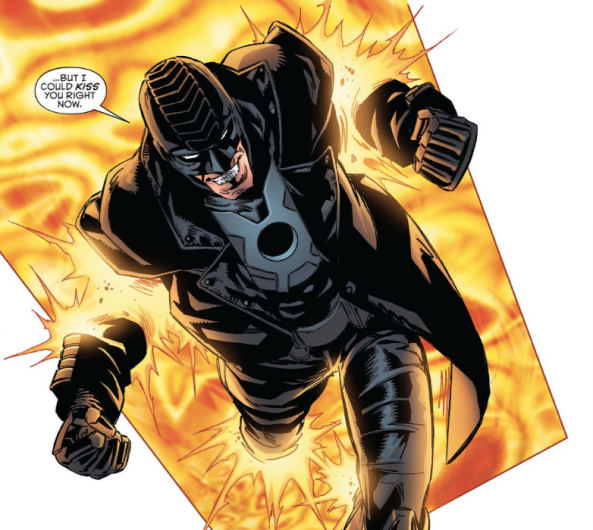 But more often than not, their characters are inconsistent and strangely off model. Whether it’s Dick Grayson rocking a Jay Leno chin:

It’s distracting what a significant drop in quality this issue brings.

Plot-wise, I have to admit I long for the simplicity of Grayson‘s initial arc. I find the current mash of loyalties, double-crossings, triple-crossings, and sworn allegiances to be pretty confusing. There are too many players with too many end-goals for it to feel satisfying any more. But even though the plot is a mess of their own making, having King, Seeley, and (especially) Janin all absent from this issue makes it all the more clear how integral they were to the success of Grayson overall. It’s a bummer they won’t be around to close out the run of a surprisingly successful book.

What’d you think, Spencer? Do you have a better grasp on everyone’s motivations than I do at this point? And was the absence of the original creative team as keenly felt on your end?

Spencer: It’s pretty hard to mask the absence of Mikel Janin, Mark. The man’s a master of his craft, and even at their best, Antonio and Borges are no Janin. Mark, you already posted some of the more egregious examples of their inconsistencies, but the moment I want to focus on is a spread from around the middle of the issue.

There are some things I genuinely like about this spread. The use of shadow in that first panel is quite effective, for example, and it’s pretty easy to follow Tiger’s actions across the page — he dodges an attack from Teshi, knocks her away, and then does the same with Bronze Tiger. The choreography isn’t exactly inspired by any means, but there’s at least some flow to it. The same can’t be said for Grayson’s battle with “Pinky,” though — he seems to be doing something different to her in each panel, and nothing he does moves logically into the next. Then there’s the backgrounds, which are completely nonexistent, instead replaced with odd swatches of color and shadow, which becomes a problem when Tiger slams Bronze Tiger’s head into the “ground” in the final panel — what kind of surface is he being slammed into? What are those shards coming out of the ground from the hit? The lack of background, at least in this panel, straight-up hurts the storytelling. When I look at this spread it’s hard to see any real storytelling reasons for most of the choices made, and it’s that kind of work that stops most of the art in this issue from really shining the way it could (and the way Janin’s so often did in previous issues).

Even those three pages late in the issue that split the sequence between Dick’s fight against the Skull Girls, Midnighter’s fight against King Faraday and his posse, and Tiger and Agent 8 don’t feel as clever as they should. Using that film motif to depict Midnighter’s fight and split the page is clever, but why film? I don’t really see any reason in the narrative why the idea of film is specifically chosen — it just seems to be there because it’s “cool,” and again, it’s those kind of choices that separate serviceable art from excellent art.

Lanzing and Kelly do better stepping into Tom King and Tim Seeley’s shoes — their dialogue isn’t an exact replica, but it’s certainly cut from the same mold — but then again, with King and Seeley giving their replacements a general outline before leaving the title, it’s hard to know how far their influence over the story travels.

What I do know is that, at least to me, Grayson was always a book that was about Dick Grayson, down to its core. In its first year it wasn’t about spy stories or the mythology of Spyral — it was about how those new trappings changed Dick Grayson as a character. The second year has lost momentum in the moments it’s forgotten that, and that goes for Grayson 18 as well.

With that said, this issue works best when it focuses on Dick Grayson. It can be hard to parse together the motivations of many of the other characters, but Dick’s love for life and his love for his friends shines through loud and clear.

Dick wants to take down Spyral — and has been actively working towards that goal for several issues now — but he isn’t willing to kill Helena or the (primarily) mislead children of Hadrian’s School in order to carry out that goal. He still cares about life, about justice, and specifically about his friends — and I’d be curious to see how much his protection of Helena is about thinking she’s been brainwashed by Spyral/The Master Weaver, and how much is simply about the friendship he forged with her during his time as her partner.

Less successful are pretty much…all the other pairings and motivations. I don’t think I know enough about Tiger and Agent 8’s relationship to get the full effect of what they mean to each other; the Skull Girls change allegiance on a whim, not really displaying any convictions of their own; I can’t tell if Faraday and his cronies just have less intel about Spyral then they think, or if they’re focused on Helena in particular for her former ties to the Bertenelli crime family and just know about something it that we don’t. All these characters, as well as their motivations and relationships, lack the focus and specificity that make Dick Grayson so compelling.

I think much of that simply has to do with the nature of being a spy.

Spies are crafty, liars, transparent. By their very nature they’re hard to read and even harder to trust. Dick Grayson is our lens into the world of Spyral, meaning that readers are meant to connect to him and see all his untrustworthy cohorts through his eyes. Again, that’s why it’s been harder to get invested in Grayson since it entered its endgame even though Dick Grayson still provides a few standout moments each issue. The less time we spend focusing on characters who aren’t Grayson, the less readers have to anchor themselves to.

I’m sure Lanzing and Kelly can bring Grayson to a satisfactory close, but it’s probably too late for this book to recapture the spark it had at its outset.