Mark: Godzilla In Hell was one of last year’s major surprises (we loved Godzilla In Hell 5 so much it landed on our year-end “Best Issues” list), so I couldn’t have been more pumped for the start of IDW’s new series Godzilla: Oblivion. Sure, the solicitation blurb sounds like standard sci-fi stuff:

A scientist has created a portal to another dimension—one where monsters rule supreme! A terrifying expedition begins into a world where hope has died and Godzilla is the unrivaled King of the Monsters. But what happens when a baby kaiju hitches a ride back to the original, monster-less dimension?

But, still, I had high hopes.

Unfortunately, Godzilla: Oblivion 1 follows up the bonkers genius of Godzilla In Hell in the most pedestrian way possible. Writer Joshua Fialkov and artist Brian Churilla, deliver a perfectly serviceable, if thin, Godzilla tale, with plenty of room for ample action and requisite wackiness in future issues.

Still, it’s hard to fault a comic for delivering literally exactly what it promises. Contract fulfilled. So much so that there’s literally not much more to the plot than what’s promised in the solicit. A genius scientist has been contracted by a hard-nosed businesswoman to create a gateway to another dimension. Once the dimension is opened, they step inside to discover a world where monsters exist, kept in line only by the might of Godzilla (we are told). With the help of barely defined alternate universe marines, the genius scientist and his companions make it back to their world, but not before a monster breaks through the portal.

If it sounds like I’m being flippant or just reducing the characters and action to the broadest, most bland terms possible, I assure you that it’s hardly intentional. Godzilla: Oblivion 1 is just not a much more satisfying read than what I told you. All of these “characters” are merely empty shells, stock characters from the Mad Libs of genre writing. Dr. Talbert’s desire to create a portal to another dimension, Ms. Yamada’s money-motivated corporate sponsor persona, and the gruff marine living in the world of monsters are such tropes at this point they don’t necessarily require explanation, but the lack of any character exploration means the issue reads as shallow. Who’s the protagonist of this series? Godzilla? He’s hardly featured in the issue at all, and his few fleeting moments are unremarkable. And I refuse to believe we’re supposed to care about any of the human characters. 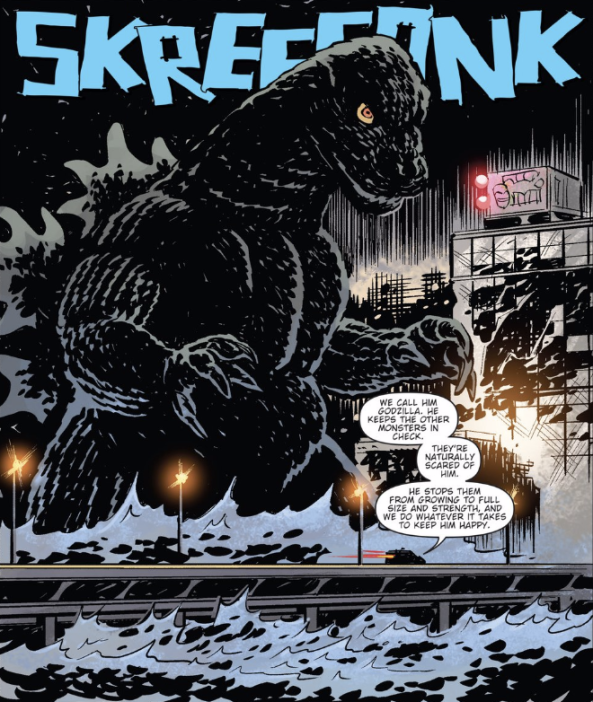 But, okay, I think you can get away with a lack of sympathetic characters if the action is compelling enough. The entire Transformers film dynasty is predicated on that idea! Unfortunately, the Godzilla: Oblivion 1 enterprise is just as empty on the action front. As soon as Dr. Talbert and the others cross over into the Godzilla dimension shit supposedly breaks loose. Monsters attack other monsters, a van is chased, a kaiju breaks through to our dimension. Potentially exciting stuff, but none of it is captured with any sense of movement or urgency by Churilla’s pencil. Take this panel of three Rodan-like monsters attacking what appears to be MechaGodzilla: 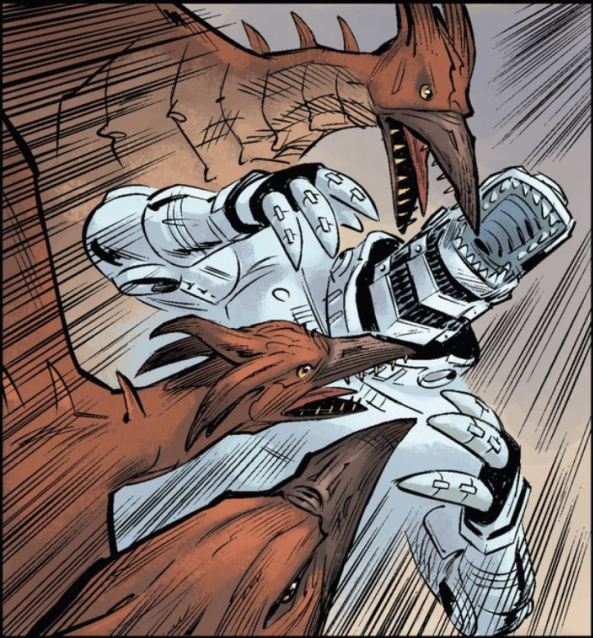 Churilla includes an aggressive amount of motion lines, but they’re not really conveying anything of interest and actually add an unwelcome amount of confusion. The motion lines make the most sense for the two monsters flying in from the bottom left corner of the panel, but the third monster coming in from the top doesn’t make sense with the motion indicated. And the lines from the top right corner seem to be beaming down like sunlight. And are the flying monsters biting MechaGodzilla? Presumably, but again, not well conveyed.

That’s just one panel, and my goal here is not to lay into Churilla’s work, but it’s part and parcel of the whole of Godzilla: Oblivion 1. It’s not bad, it’s just not good. It’s the definition of “fine.” It delivers exactly what it promises, and nothing more. This is just the first issue of a promised five, so it’s very possible things will pick up from here. While the character’s motivations weren’t presented as a mystery, per say, they certainly could be illuminated in future issues. Perhaps Godzilla will become a more definitive presence as the story unfolds. This is all within the realm of possibility. But nothing here really makes me want to stick around to find out.

How about you, Drew?

Drew: I wish I had a contrasting opinion, or even some different points to make here, Mark, but you pretty much summed up my feelings perfectly. There’s a point early in the issue where Fialkov lampshades the familiarity of the whole premise, having his wary scientist sum up the conflict while acknowledging how familiar it is:

As if emphasizing the paraphrasing of this plot-point, Churilla doubles up on the panel border, giving us a thin white frame within the heavy black one. I’m inclined to give Fialkov and Churilla the benefit of the doubt — they clearly understand that this is a common trope, and go out of their way to highlight it. It’s clear that this is all just an excuse to bring monsters to Earth, so the details don’t really matter, but I still find myself wishing they had given us some details.

Take Ms. Yamada, for example. Fialkov makes it clear that she’s a powerful, wealthy businesswoman who likes to do things her way, but never bothers to even hint at why she’d be interested in interdimensional travel, or why she’d want to visit another dimension herself. Money, maybe? Perhaps her motivations will be explored in future issues, but this issue does little to make me interested in what those might be. Here, she functions as an arbitrary and unnecessary plot device, motivating a charge and retreat that would have been just as justified if the explorers were scientists more prepared for this “test drive.” So long as we can imagine a manned expedition as an eventuality for this project, her role becomes pointless — her business background, her lack of scientific training, her inexplicable interest in interdimensional travel; none of this comes up in the story.

But again, the actual beats of how King Ghidorah makes it to Earth may be trivial. I suspect the point is that Ghidorah arrives, and that our intrepid scientists have learned that Godzilla “keeps the other monsters in check.” Perhaps the interpersonal conflict between Doctor Talbert and Ms. Yamada will come to a head, perhaps Yamada’s motivations will be clarified, but for now, this issue feels largely pointless. The takeaway from this issue may very well be “monster sneaks through interdimensional portal,” even though this issue never bothers to explain why the portal would be so damn big, or even why they would leave it open other than that “it’s not closing!”

Perhaps more importantly, the reliance on tropes robs this issue of any real stakes in the action — nobody’s character is developed enough for me to care about them. As Mark suggested, that might be fine if this issue offered satisfying action, but it really doesn’t. We see the aftermath of destruction, and one anonymous goon is killed, but much of the action is devoted to monster-on-monster fights that offer none of the thrill of scale that defines Godzilla in my mind. That is, there are no buildings to smash, so the size of these monsters is irrelevant. Robbed of that basic element of the Godzilla formula, the fights become all the more generic monster-on-monster blandness, with no human stakes or sense of real danger. Even the threat of monsters in the “real world” rings false, given how artificial everyones motivations seem to be — there’s not enough nuance in either dimension to elicit actual empathy.

The result is entirely bland — there’s nothing particularly off-putting, but nothing to make me want to return, either. Maybe subsequent issues will flesh out these characters, maybe subsequent issues will offer more satisfying action, but nothing in this issue suggests that either will be handled all that well. I do wonder if I would have enjoyed this series if I had just stared with issue 2 (“Our interdimensional portal has already brought monsters!” is a hell of a lot more interesting than “We created an interdimensional portal. I hope nothing bad happens!”), but as an introduction to this story, this issue utterly fails to sink its teeth into me, no matter how big those teeth may be.