Drew: What is a comic book series? That sounds like a simple question, but it’s one of those definitions that falls apart under close scrutiny. Peter Tomasi understands how strange our notion of a series can get, as he piloted Batman and Robin through the better part of a year without Robin. In that case, it wasn’t the cast, but the creative team that allowed us to group those issues as part of Batman and Robin. But if we take that definition of a “series” as something to do with a serialized narrative told by the same person (or team of people), what do we make of “Super Legion,” Tomasi’s new eight-part crossover that cycles through four different titles? Does it function like its own miniseries, or do its constituent issues maintain enough of their series’ identity to keep them distinct? The answer lies somewhere in between, which makes Batman/Superman 31 one of the most fascinating, if troubled, individual issues I’ve read in quite some time.

I was very excited for this event; I’ve been a longtime fan of Tomasi’s, but have often lamented that he tends to land on “support” series like Green Lantern Corps and Batman and Robin — series that are regularly penned in by the goings on of their flagship counterparts. Seeing him finally get to cut loose with his own eight-part storyline, headlining series like Superman and Action Comics, was a thrill. Finally, we’d be able to see what Tomasi can do when his hands aren’t tied by another writer. Only, the bizarre four-series format pens in Tomasi in a different way, dictating the cast — at least to the extent that characters like Batman and Wonder Woman appear in the title of certain installments.

But maybe seeing these constraints as shackles is my problem — Tomasi has regularly excelled under similar circumstances. Moreover, this issue reveals that he isn’t just paying lip-service to the title of this series — there’s a substantial shift in tone between this installment and last week’s Superman 51. Where that issue was bright and inspiring (in spite of the morbid situation), this one is dark and gloomy, perfectly reflecting the addition of Batman to the mix. Indeed, Batman very much dominates the proceedings, which may be an odd choice for this issue as part of “Super Legion,” but works beautifully as an issue of Batman/Superman.

I’m particularly enamored with how Tomasi handles Bruce’s reaction. His first step is to help — to stop his loved one from dying — and when that fails, he seethes with an impotent (if steely-faced) rage.

On my first read-through, I didn’t love this sequence — it just felt a little small, both literally and figuratively. Cramming the destruction over to the bottom right of the panel makes it hard to understand exactly what happened, and the choice to keep the camera still only exaggerates that confusion, keeping us at an emotional distance from whatever Bruce is going through. The more I think about it, though, the more I love this choice — it perfectly captures Batman’s psyche. He’s basically emotionless — his face barely moves — aside from his violent rage. Keeping the camera still amplifies the dispassionate nature of that rage; he just has to do something.

As an issue of Batman/Superman, Bruce’s reaction to this news is all I really need, but as part of the larger crossover, Tomasi adds another pretense for Clark’s visit to Gotham: Kara is missing. It’s a development that comes out of left field, but I absolutely believe that Bruce would be Clark’s first stop to locate a missing person (you know, after trying to find them with x-ray vision or whatever). More importantly, it gives this event some structure moving forward. There was little doubt that this second installment was going to need to set something in motion (Superman 51 was more of a prologue than a proper first chapter), and while I hope the search for Kara doesn’t eat up too much of the event (I really did love the more quiet meditation on mortality that was the previous installment), this works well enough to lend give us momentum heading into next week.

Spencer, I’m less sure what to make of the other events of this issue — the Chinese Zodiac monsters and the reverse-Jekyll and Hyde pseudo-Superman — so I’m hoping you have some insights. Also, aside from that two-panel sequence, I didn’t really talk about Doug Mahnke’s art at all — I found his acting to be a little stiff, but maybe you can provide a little more nuanced analysis than that. Or, you know, feel free to just talk about what a big baby Batman is.

Spencer: Mahnke’s acting can be a bit stiff at times, Drew, but I’ve noticed that this mostly happens when characters are supposed to look happy; Superman’s grin as he pets Bat-Cow is downright eerie. Mahnke’s much better at capturing pain and stoic determination in his characters, and that ultimately makes him a rather appropriate fit for Batman/Superman 31, what with its focus on Superman’s looming death and Supergirl’s mysterious disappearance. Moments like Bruce’s sudden rage (which Drew already covered), and Alfred’s sad, subdued reaction to both Clark’s diagnosis and Bruce’s pain land surprisingly well, so I’ve got to praise Mahnke there.

Also, got to give major kudos to Mahnke for this gorgeous opening splash:

If nothing else, this is a perfect piece of iconic imagery, especially for a title named Batman/Superman.

Digging deeper into Drew’s definition of what a comic book series actually is, it seems important to clarify that series from DC and Marvel are also beholden to the continuity of other titles being published by the same company. The structure of this crossover — one overarcing story, with the focus shifting a bit depending on which title each chapter is a part of — is a common one, and so far I think Tomasi is nailing the execution. This issue follows the general thread of the story established in the first part (it continues Superman’s mission of informing his loved ones about his death, and Batman and Supergirl are a natural progression from Lois and Lana in that regard), but also digs into the premise that has always defined Batman/Superman as a series.

That premise, of course, is the relationship between our two leads, and especially their similarities and differences. When it comes to differences, I don’t think there’s a moment in Batman/Superman 31 that explores them better than the following fight scene: 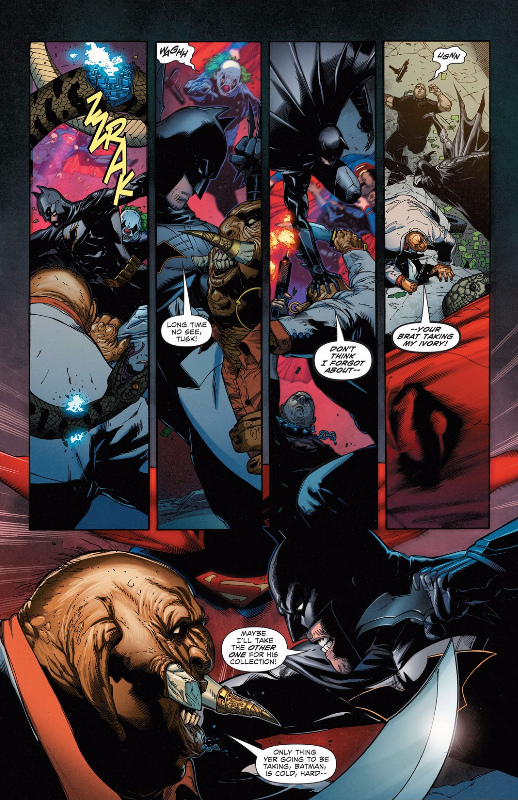 First of all, Mahnke lays down some solid action beats both in this scene and throughout the issue as a whole — the fights aren’t super-tightly choreographed, but each panel is dynamically framed and the action hard-hitting, so they’re still quite enjoyable. Most interesting here, though, is the contrast between Batman and Superman’s methods. While Batman focuses on Tusk alone, wearing him down with attacks and intimidation, Superman swoops in silently and takes down the rest of Tusk’s crew in but a moment. Superman’s abilities are out of place in Batman’s world, which is something Mahnke and colorist Wil Quintana make quite literal in the art — Superman’s bright reds and blues and the blur of his powers stand out like a sore thumb amidst Batman’s more grounded abilities. It’s a fantastic, visually arresting way to contrast the two heroes.

(The creative team does something similar on a grander scale; there’s a two-page sequence set in Metropolis, and the city is a startling contrast to Batman’s Gotham. Metropolis is bright and vibrant, yet while context seems to suggest that the scene takes place concurrently with the rest of the issue, it’s so dark and gloomy in Gotham that it appears to be nighttime there. Again, it’s a nice visual representation of the differences between these two friends by Quintana and the rest of the artistic team.)

Ultimately, though, Tomasi is able to show how those differences actually bring his two leads closer together. Superman knows that Batman has skills he doesn’t, and trusts him completely to do things he can’t (which must be a hard thing for a man this super to face at times, even one as humble as Clark Kent), and despite appearances, Bruce actually seems to deeply trust him as well. While Bruce pretends to be annoyed with Clark, he instead opens up in his presence, becoming more playful and freely discussing personal (and/or family) matters with him. And, oh, how he worries about Clark!

Sure, it isn’t exactly a soul-baring therapy session, but for Bruce Wayne, this level of openness is a lot. There’s something almost intimate about the way Bruce discusses his son and his pets (even joking about their names!) with Clark — I can’t imagine Bruce opening up this way to the rest of the Justice League, or perhaps anyone else outside Alfred and the Robins. The work Tomasi puts into establishing Bruce and Clark’s friendship pays rich dividends; it’s clear why Clark would spend so much of his precious, rapidly-dwindling time with Bruce, and it’s clear why the idea of losing Clark brings Bruce so much pain.

So yeah, Tomasi is nailing those emotional beats, which is vital, because those are the moments that are going to carry this storyline. Drew, I’ll admit, I don’t really have any more insight into the pseudo-Superman or the Zodiac Monsters than you do (other than that the pseudo-Superman reminds me of the four Superman-replacements that arrived after Superman’s death, adding The Death of Superman to the list of iconic storylines this crossover is paying homage to), but the fact that we’re already 25% through this crossover and these actual plot elements still play such a minor role tells me that the plot isn’t Tomasi’s top priority here; it’s likely just a framework to allow Tomasi to dive deeper into Clark’s relationships before his death.

(Although, with that said, I wish Tomasi had spent just a tad less time on the Zodiac Monsters this time around; their shtick grows tired long before Batman and Superman dispatch them, largely due to their random, as-of-now unexplained arrival and their repetitive dialogue.)

So far, I’m finding that focus on relationships incredibly compelling. I hadn’t exactly gotten attached to the New 52 Superman over the last few years — between the whiplash from the many discarded “new takes” on the character and a lack of some of his most iconic elements (his relationship with Lois Lane first and foremost), there wasn’t exactly much to latch onto — but over these past two issues Tomasi has finally helped me feel connected to this interpretation of Superman.

I’d imagine that was the purpose of this crossover from the start: to help audiences connect to this Superman just in time to bench the character, thus making his absence mean something. That’s a cynical take, but if it’s true, than I’d say it’s been a successful strategy. It just goes to show that it isn’t new takes or reboots that make a character compelling, but simply solid character-based storytelling with respect for the character’s pasts and core traits. Tomasi’s certainly pulled that off so far, and based off these last two issues, it’s a shame he didn’t get a chance to take lead on the Superman line earlier. It might have been something really special.