Patrick: Silver Surfer has a puzzling relationship with the concept of “history.” I suppose we should expect no less from a character that can get caught in infinite time loops and regularly has a role in actively remaking reality. But he’s also just a strange character to consider from a meta-fictional standpoint: a villain-turned-hero whose whole shtick reads like a crummy Beach Boys B-side. There’s a weird mix of highfalutin science fiction mumbo-jumbo and campy comic book irreverence built into the character’s DNA. Was he the herald of planet-devouring mega-monster? Sure, but his last name is also Radd. Dan Slott and Michael Allred use the occasion of Silver Surfer’s 50th anniversary to celebrate the character’s duality and challenge the comic book industry’s penchant for rebooting their worlds and characters.

Shalla Bal has a plan to overwrite all of Earth culture, replacing it with the “perfect” world and peoples of Zenn-La. This isn’t a simple Find “Earth,” Replace With “Zenn-La” function, through the power of the Illuminatrix, she’s able to go back and eliminate the entire history of the planet Earth, including all of its artistic and cultural contributions over the centuries. That’s maybe an overly human-centric view of the history of the world, but for the purposes of this issue, the entirety of human culture is being represented by Marvel Comics. And why not? Within the context of Silver Surfer 3, it’s naive to think that there is anything anything else to the universe.

We begin the issue with Surfer and Thing already locked in combat. Thing wears a purple-y space-man costume, which is gradually shredded as he and Norrin tussle. We don’t see ol’ Ben Grimm in a lot of clothes normally – his exposed chest is as much a part of the character’s design as it is for Hulk. A clothed Thing looks unnatural, and it plays against his iconic silhouette and color palette. But that’s how we’ve seen Thing in a post-Secret Wars Marvel Universe, traipsing around the Galaxy with the Guardians in team-branded jump suit. This isn’t exactly the same suit, but it has the same effect. Ben will eventually realize that he’s being controlled, and break free, and part of that process involves the destruction of that suit.

Norrin even points out that “these aren’t even [his] words.” As far as Silver Surfer is concerned, this is Ben Grimm in name only. It’s not entirely clear what gives Ben the strength to reclaim is former identity and fight at the Surfer’s side by the end of the issue, but sure seems like it’s got something to do with Norrin beating the crap out of him. In fact, he even gets “his words” back courtesy of Norrin putting them in his mouth. 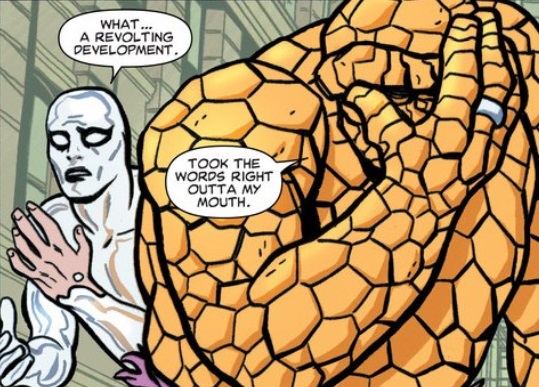 By contrast to our stalwart, old-time superhero friend here, the Silver Surfer is also aided by the All-New, All-Different Avengers. It’s a super-cool splash page when Lockjaw teleports them all into the scene. And it’s even kind of a thrill to see Allred drawing all of these characters — Squirrel Girl! Jane Foster Thor! Sam Wilson Captain America! Miles Morales Spider-Man! Ms. Marvel! I even get a rush of FF-fanboy excitement as seeing a fresh Allred drawing of She-Hulk. But these characters all transform instantly into Zenn-La versions of themselves. These new(er) heroes and this new team doesn’t have nearly the strength of identity that someone like The Thing does.

And then there’s the issue’s resolution: Norrin sacrifices himself in order to stop this planetary reboot from taking place. As he blasts the Zenn-La reality out of existence, he shouts “FOR ALL WORLDS.” He’s not simply saving the one world he currently resides in, but he’s ensuring that other worlds cannot be similarly rebooted. Writer Dan Slott makes a habit of embracing ridiculously long-game plotting – he had been spooling up for Superior Spider-Man for years before executing on it, and similarly, threads of Spider-Verse can be traced back even before that. If anyone can stand as a champion of history and continuity, it’s Slott. Here, Silver Surfer becomes his in-universe avatar, throwing himself on the sacrificial altar, and standing up for all that history.

Shelby! I got so tied up in the heroes, I didn’t event talk about Dawn and Alicia, both of whom are fucking awesome in this one. I laughed out loud when Dawn asked “do you even surf?” They are the people that help Surfer to recognized the value in this world to begin with, and I love that they recognize (and respect) this in each other.

Oh, and it’s weird that Zenn-La-ing Daredevil makes it so he can see. Radar sense not enough for you buddy? He’s already more perceptive that 98% of the population, whether he can physically see things with his eyes is sorta moot.

Shella Bel: Patrick, I think your last statement perfectly encapsulates the real horror of Shalla Bal’s plan. She’s making everyone perfect, based on her definition of perfection. People are meant to see, so the way to “fix” blind people is to make them not blind anymore. Done. Next. It doesn’t matter that Daredevil has his radar sense which is, in a lot of ways, better than regular vision, or that Alicia values the art her hands made more than the vision required to see it. Their perceived imperfections must be corrected.

So if Silver Surfer is the champion of continuity, advocating to save all the convoluted, terrible, wonderful stories of the past, what should we make of his destruction of his own culture? Slott has, in just a few pages, both lauded the importance of remembering and retaining history and rendered Silver Surfer history-less, a blank slate upon which anyone can impose their own, new story. As much as I believe in the importance of continuity in comics, I’ve always been very uncomfortable with the idea of sacrificing a new story idea in order to hold on to the status quo; that’s a quick and easy path to a lot of boring, tired stories. But Slott is playing a much trickier game, sacrificing the culture and stories of one character to save the culture and stories of another. It makes perfect sense for someone writing a story about a former world-ending villain who’s turned over a new leaf and is ready to help.

Culture as continuity and history as story can become very meta and complicated very quickly, which is why I love Dawn and Alicia in this issue. They ground the story with the oh so relatable “meeting the ex” drama.

I mean, everyone hates learning their current snugglebun’s ex is cool; not only is Dawn dealing with a super cool, straight up magical former Earth girl partner, she’s also gotta deal with the ultimate crazy ex trying to remake the entire galaxy in her own image. That’s a lot for one spunky gal to take in at once. It’s scenes like this that make me love the Slott/Allred pairing on this book. Allred’s playful, clever style matches perfectly with the voice Slott has given the book; it manages to both look back to the history of the characters while delivering a new and fresh story, with a few plucky one-liners thrown in for flavor. Now, if you’ll excuse me, I feel a sudden urge to watch all my old favorite movies, just in case someone comes down to erase my entire culture in the name of perfection.