After a gorgeous cover by Steven Griffin that apes both the covers of pulp novels and the iconic work of graphic designer/filmmaker Saul Bass, there’s a “helpful” page that fills in new readers on the series status quo. It’s 1954, Byrd, our titular Hawaiian Dick, is living in Honolulu making ends meet with the help of a detective friend and former waitress. There’s also talk of an FBI agent, a subpoena from the House Un-American Activities Committee, and the mob. This all sounds amazing, and right up my alley.

But the issue that follows doesn’t include any of these elements. In fact, none of these characters or plot points make an appearance at all. Instead, we’re following the adventures of a third Byrd brother, Mike. Mike’s a gambler, and with his luck running short he takes up a P.I. case of his own. Standard cheating wife assignment. But when the mobster he’s spying on catches him, Mike finds himself on his way to Hawaii to track down a musician, Tread Lightly.

And I’m sorry to say, but none of the lead story grabbed me. It’s pretty standard noir boilerplate prelude—down on his lucky protagonist, unfaithful spouse, something goes wrong— and despite being about 20 pages it feels light on substance.

However, I’m a big fan of Jacob Wyatt’s art. The color work is especially impressive, honoring the period-piece nature of the story while still feeling contemporary. I’m especially taken with the mildly psychedelic backgrounds as Mike and the reporter sit down in the beginning of the issue to discuss Tread Lightly.

Also included this issue is a second story which finally introduces us to our titular character. And while it’s more of the same by-the-numbers noir, I did find it considerably more compelling. Maybe it’s  because instead of more prologue we’re thrust right into the story. Sure, that’s partly because this story was supposed to run at the end of the last Hawaiian Dick book, but I found it to be a hell of a lot more compelling than the lead story.

The bummer is that I wanted to really like Aloha, Hawaiian Dick 1. I’m in the bag for all things noir and tiki culture. But even though this issue didn’t work for me, I am interested in going back and reading earlier Hawaiian Dick stories. How about you, Patrick?

Patrick: This one worked better for me than it did for you Mark, partially on strengths of the series that are merely implied by this issue, rather than demonstrated within these actual pages. Like you, I was super-jazzed by Sean Dove’s homage-happy cover and that introduction page. It promised “the living embodiment of Hawaiian myths and folklore,” which is so up my alley. Moore knows that the story he’s about to deliver, however, doesn’t execute on any of those promises: the last line of text on that introductory page is “Naturally, we open in Kansas City.”

It’s that kind of tongue-in-cheek self-awareness that makes the issues shortcomings all the more forgivable. I like that Mike, when addressed as Mr. Byrd, corrects the speaker by saying “Mr. Byrd is my older brother.” The line we’d expect is “Mr. Byrd is my father” but this is a cute wink at an audience that might be feeling they same way: “hey yeah – where is the Byrd I care about?”

Rather than looking at Aloha, Hawaiian Dick 1 as an introduction to the kinds of stories the series tells, I see it has an introduction to how Moore and Wyatt tell their stories. I absolutely adore Wyatt’s art style, which appears to be proudly inked by pencil, so that even his clean line drawings have an element of charcoal-y DIY to them. Again, I’m also new to the series, so I can’t say whether these issues always look like this, but man does that style feel like an appropriate expression of Mike’s half-assed approach to detective work.

Which isn’t to suggest that Wyatt is a slouch in any capacity. Since most of the action in this issue is just people talking to each other, the characters’ acting is necessarily on-point. A curled lip, a raised eyebrow, a mouth half-agape – Wyatt does more purposeful storytelling in individual drawings than most artists do on a whole page. Let’s take this example of Becky on the bed when Garozzo offers Mike a job he’s not going to be able to do. 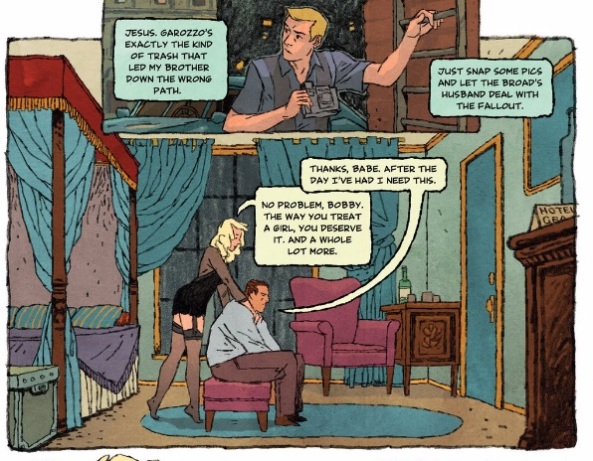 There are a lot of panels throughout the issue that eschew detail in the background — or, as Mark pointed out, goes for something a little more psychedelic — but those kind of liberties are only taken once the space has been so firmly established. This clarity also serves Moore’s storytelling. Think about how weird of a beat he’s written here: Garozzo reaches through the closed window to snatch Mike and drag his pathetic ass into the room. There is no question in the reader’s mind about the size and location of this window so that surprising moment lands remarkably well.

Also, at the risk of turning my contribution to this piece into endlessly heaping praise on Wyatt, I love the lettering in this issue. One of the hallmarks of a good PI story is the ubiquity of voice over narration. In comics, that usually takes the form of narration boxes that are both visually and tonally distinct from the speech balloons that show our characters’ dialogue. That’s all well and good for stories that are trying to sell the difference between the inner life and presented identity of the protagonist, but rings a touch false for classic noir detectives – especially Mike Byrd. Mike Byrd is Mike Byrd; on the job or with friends or running for his life, he’s the same basic guy. So why should his inner thoughts be any different? Wyatt puts all the issue’s copy in square balloons, sometimes allowing a tail to trace back to the speaker, but frequently floating ownerlessly in space. Mike’s thoughts are colored blue, but are identical to the speaking in every other capacity. It may be a small detail, but this slight tweak of the medium helps to sell me on the continuity of the character’s experience. All of this makes a rather rote story immediately more compelling.

Also, man, how good is that visual gag about Mike losing his car in that poker game? We see Mose accepting the bet and then it’s smash-cut to the next morning: 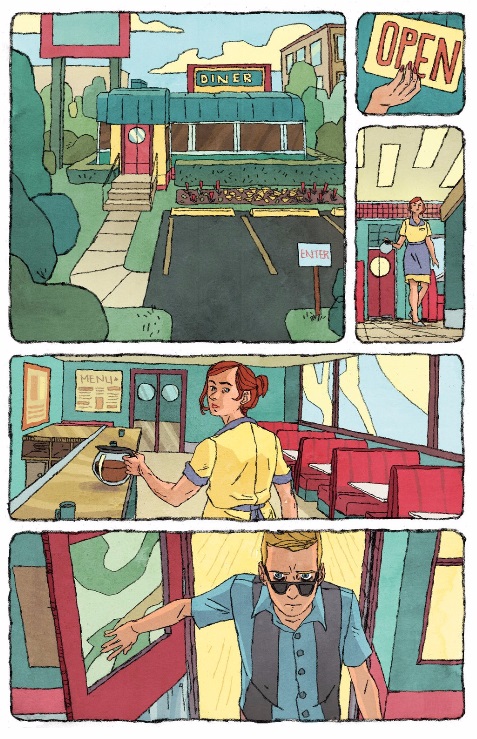 This may actually be my favorite page in the whole issue. It takes a second to register why we’re looking at an empty parking space in the first panel, but as soon as we see the panicked look on Mike’s face, it’s immediately clear what happened.

Also, I want Mike’s shirt. But that’s neither here nor there.

Mark, I think we agree that there’s something magical happening in this series, and I for one cannot wait to see this level of storytelling applied to the more compelling environment of Honolulu. See you back here in a month for issue two?