Drew: As much as I enjoy The Dark Knight Returns, I have to admit that it’s a pretty shaggy story — Batman takes on an entirely new foe in every issue (Two-Face, the Mutants, Joker, and the Government, respectively), and most of the conclusions people draw about the book’s maturity comes from parsing only one or another of those battles. How does your neocon reading of part 4 jibe with Bruce Wayne getting his groove back in part 1? How does your psychosexual reading of his relationship with the Joker fit in with the rest of the series (which continues well after the Joker dies)? For all the glib distillations of DKR, none of them actually capture the angularity of what I would argue is a decidedly episodic story. Those terse critics should rejoice, then, over DKIII, which offers a through-line so clear, even literary critics should be able to find it.

Of course, the shagginess that makes DKR so hard to pin down might explain its success — in dealing glancing blows to so many aspects of Batman’s character (and superhero stories more generally), it never dwells on one for too long. This issue, on the other hand, advances its “a malevolent race of superpowered beings is bad” point by simply repeating it. This time out, Superman is roundly (though surely not permanently) defeated by the Kandorians, along with the help of his daughter, Lara. Bruce and Carrie can do little other than watch from the sidelines, though they manage to hatch some kind of plan by the issue’s end.

It’s a “putting the pieces in place” issue if ever there was one, but in spite of the thematic repetition, there are a few little details that complicate this issue a bit. The biggest one to me was that of Commissioner Ellen Yindel, who seems resigned to accept her irrelevance when an angry mob shows up at her doorstep. 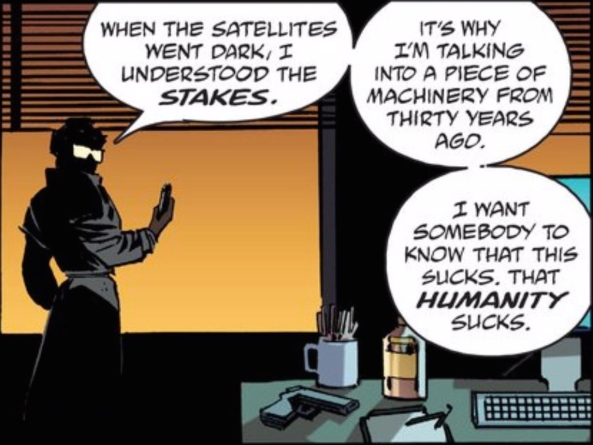 It’s that “30 years ago” line that gets me. You know what else is 30 years old? The Dark Knight Returns, that’s what. The obvious reading is that Frank Miller and Brian Azzarello are using this franchise, this machinery built 30 years ago, to remind us that humanity sucks. Of course, that presumes Yindel is the most appropriate Miller/Azzarello analogue, which I believe it’s safe to assume isn’t the case. By the end of the issue, Batman has arrived to talk some sense into Yindel. I think the better reading is that Yindel is offering an incorrect interpretation of The Dark Knight Returns, one that a once-again-in-the-costume Batman is here to fix.

Which, of course, begs the question of what that fix is. Obviously, we’re a good four issues from any solid resolution to this series, but I think DKR may provide us with some answers. That series ultimately resolved with Batman rescuing Gotham from chaos, then disappearing spectacularly. That is, it was about one man scoring a victory over humanity’s sucky tendencies. The Dark Knight Strikes Again, on the other hand, calls in the Justice League to achieve a larger victory. I believe those series chart a trajectory that suggests the day may be saved by an even bigger cast. That may seem unlikely, given the apparent losses of Superman, Green Lantern, the Flash, and the Atom (even if this issue teases the return of Ray Palmer, and a Batboy recovering the Flash), but I’m suspecting that the recruitment of Yindel suggests some non-powered allies. Or, to put a finer point on it, I think it might suggest the recruitment of ALL the non-powered allies. That is, the whole of humanity might need to somehow come together to fend off the Kandorians. I have no idea what shape that may ultimately take, but it’s clear this threat is more than the Justice League can handle on their own.

But maybe it’s too early to predict any of the outcomes of this series. This issue marks only the halfway point of this series — by this point in DKR, Bruce had yet to encounter either Superman or the Joker — so a lot can change. Still, the series has been so fixated on the Kandorians (enough to put “Master Race” in the title, in spite of whatever cringes that might elicit), it’s hard to imagine an entirely different foe rising up in the final four issues.

Whew. Michael, I really didn’t intend to spend so much time making wild predictions about this series, but this issue felt decidedly thin to me. Were you able to glean any more from this issue, or did it mostly feel like it was just emphasizing how bad the Kandorians are to you, too?

Michael: Very intriguing points about the episodic nature/success of DKR my friend. I think that one of the problems of DKIII lies in the fact that it is more of a through-line story; one that may be longer than it needs to be. DKR was four issues and DK2 was three — DKIII is eight. This issue did feel very thin Drew; the problem is that we’re four issues in and not a whole lot has changed in terms of the Kandorian conflict. Evil Kryptonians is a plot that has been done to death in every Superman medium — I welcome the curveball “other” conflict that Drew is suggesting. DKIII is a curious series that has had Batman sit and watch while the world erupts into chaos around him. Granted he’s facing an army of superpowered maniacs, but lying in wait kind of seems un-Batman, doesn’t it? Especially Miller’s no-nonsense, never-wrong behemoth Batman.

Given the fall of the various heroes throughout DKIII it is very possible that the overall theme will be “returning power to the non-powered.” This argument is strengthened by Batman’s inaction (until issue’s end) and Superman’s Kandorian imprisonment. But let’s zoom out a bit, shall we? This is the second time in four issues that we have found Superman frozen in a state of inaction, the first being his self-imposed exile. And as Drew stated, the Dark Knight saga has a habit of having Batman showing up to make a difference then disappear for an indeterminate amount of time. What’s the message that Azzarello and Miller are trying to send here? Heroes won’t always be there for you? Heroes don’t last forever? Everyone has to hang up the cape some time? Yes Superman will return to help Batman save the day, but it’s a weird choice to open with Superman retired, come back and then be “forced back into retirement.” I suppose that’s one of the arguments against The Dark Knight Rises, but I won’t hear it because I love that movie.

There are effective moments in The Dark Knight III: The Master Race 4 — it’s not un-engaging. I felt the power of the entire planet watching Superman getting beat down by his own daughter. I also liked the moment where Bruce is trying to reassure Carrie but thinks about how hard it is to smile without the cowl on. That particular trait is something that is so very specific to the Miller Batman, making it completely fit in here.

The conventions of the evil space aliens setting to conquer Earth by smashing through American monuments is something that I didn’t need to see in this book. The arc of Superman’s daughter Lara is also as easily predictable. Her siding with the Kandorians is the equivalent of joining a cult to piss off her dad. As far as pop culture characters go, Lara is currently being manipulated/providing as much of a defense as Anakin Skywalker in Revenge of the Sith. More than likely she’s going to realize that she was gravely mistaken in siding with the Kandorians and helps her father defeat them. Again, I would love if this book played against expectations and did something completely unexpected — but I really don’t think it’s going to.

One comment on “Dark Knight III: The Master Race 4”