Ryan M: I’m a sympathetic cryer. When I hear that telltale catch in someone else’s voice, my eyes swell. It’s not limited to real people either. Characters in movies I don’t even like can get me pretty easily, as well as any one who is dying and says that they aren’t ready out loud. I’m also not really a fan of crying in front of people, so I tend to be wary about finishing a book on the bus or seeing heavy dramas at the movie theater. So, I made sure I was all alone when I read Saga 36. That’s how sure I was that Brian K. Vaughan and Fiona Staples were preparing to gut me with empathetic sadness as they closed an arc with the death of one of the characters. Of course, I was pretty wrong about that. I still cried, but only happy tears.

Saga 36 closes the arc of Hazel’s time at the Detention center. Marko rescues her and says goodbye to his mother (i.e. Cry number 1 and number 2). The Will confronts Ghus and loses all the fingers on one hand in one of the issue’s most intense moments. Now, that seems like a dark moment, but since this issue is about hope, the incident causes the Will to be ruled by his hallucination of The Brand rather than the spirit of The Stalk and he leaves without causing any fatal damage. Even Upsher and Doff get a happy moment, as they realize that they are free from the Will. All of this not-depressing stuff was just an appetizer to the end of the issue. Alana is pregnant and the final panel of the  arc is a shocked Marko and a glowing Alana. 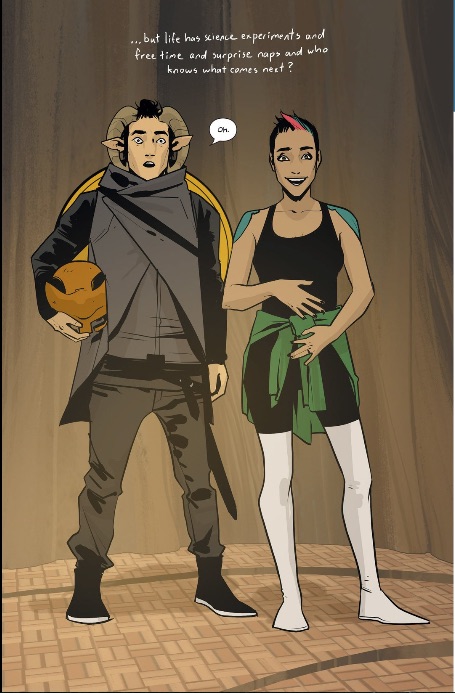 It’s the best kind of twist, one that has an element of surprise, but in retrospect feel inevitable. Apart from whatever plot implications that this development offers, there is something pure and hopeful about this final panel. After years of struggle Alana and Marko has just gotten their family back together, but that hardship is nowhere to be seen. They stand with open body language and unguarded expressions. The youthful spirit of Staples’ art is reinforced by Hazel’s narration on the page. She mentions “science experiments, free time and surprise naps,” recalling the more exciting earmarks of elementary school. Without a trace of the weariness or cynicism that would be justified given her past, Alana looks ready to embrace this new adventure with the verve of a fourth grader.

The issue underlines the importance and power of familial love. After years of separation, Marko is clearly unsure as to whether Hazel will remember him. 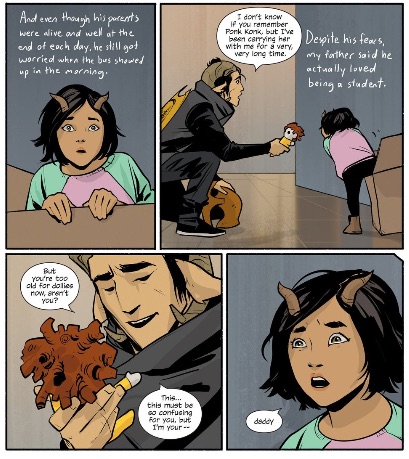 Again Hazel’s narrative has thematic relevance without becoming expository. In the upper right panel above, Hazel is both talking about the universal experience of going to school, but also Marko’s feelings of fear and love. The first panel above shows Hazel’s surprise and curiosity, but the reader is left in suspense as to whether she will remember him. That concern that Hazel may have been too young becomes stronger with the very well observed childlike movement of climbing out of the box. We never doubt that Marko feels the bond with her, though he holds himself back so as not to upset her. That’s what makes the final panel all the more powerful. Hazel does recognize her daddy. Since Vaughan and Staples have given us so much of these characters separately during this arc, it’s so satisfying to get this moment for the two of them.

If Marko and Hazel prove that time and space cannot sever the family bond, The Will shows that even death cannot stop it. 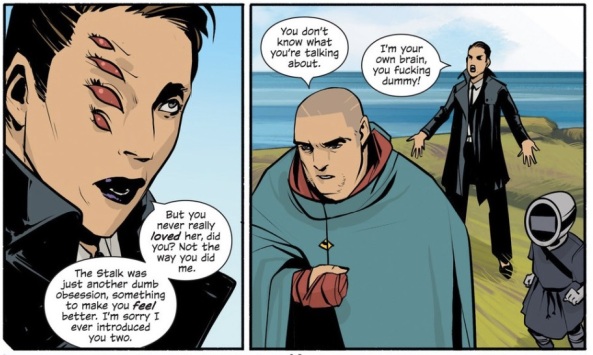 The Will has been without empathy since his sister died. His use of Heroine and hallucinations of an enabling The Stalk have taken the man who risked his life to save little Sophie to one with his hands around Squire’s throat. Having your fingers chopped off, nearly killing a child and then having your sister call you a fucking dummy from beyond the grave serve as The Will’s low point here. Even with only six fingers, life for The Will seems to be looking up. It’s no coincidence that it’s his sister and her assertion of their family love that finally gets through to him. In the panels that follow, Vaughan has The Will admit the truth. He is not driven by vengeance so much as a deep loneliness and grief.

Patrick, I’m interested to know what you think. Did you find the issue as hopeful as I did? I didn’t really dig too deep on the coinciding escape/rescue attempts at the detention center. What do you think of the way that was handled. Speaking of handling, how about Ghus’ axe skills? On a speculative note, who do you think The Brand is calling “the one chick who calls you on your bullshit”? I’m hoping it’s Lying Cat. I miss that feline.

Patrick: Oooo! Speculation! Lying Cat is a great guess and she is one of this series more iconic characters. I would also be interested in meeting a new character from The Will’s past, one that could do something to counteract the hilariously myopic morality of the Stalk and Brand on his shoulders. It’s fascinating that The Brand even identifies herself as part of his “own fucking brain” – doubling down on the psychological / emotional explanation for what he’s experiencing. This isn’t some magical projections of people he once knew, and they’re not Isabel-esque ghost-torsos, these visions are quite literally The Will trying to impose order on the conflicting impulses inside his drug-shredded brain. His conflict is almost entirely internal. Sure, Ghus sliced his fingers off — and it looked like an awesome still from some hyper violent anime — but check out how little that move really bothers him. 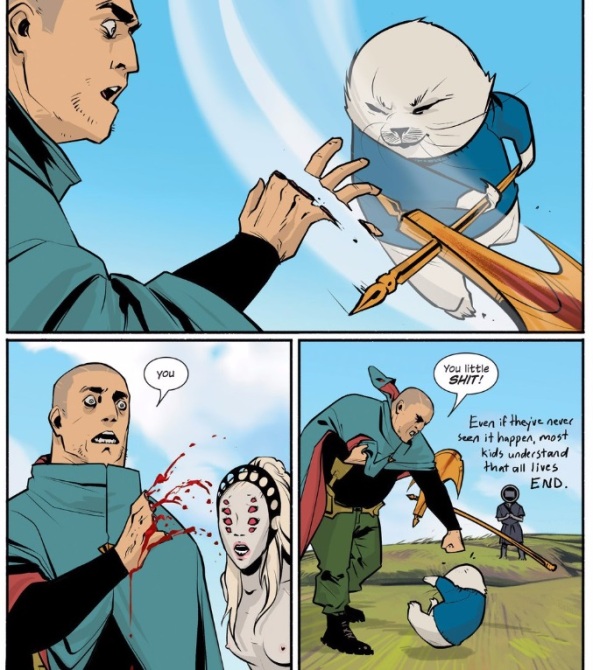 He’s surprised, and miffed enough to call the most adorable creature in the galaxy a “little shit,” but the next time we see him, he’s bandaged and using his fraction-of-a-hand to strangle the Princeling. Losing those fingers hasn’t rocked his world nearly as much as being challenged by his own brain-sister. That speaks to the power of home and family that Ryan so gracefully illuminated elsewhere in this piece. It’s sorta the other side of it though, right? Family has the power to lift you up and to crush you in equal parts. That’s how success and failure are measured for our characters in this issue: The Will’s family (such as it is) rejects him, and Marko, Alana and Hazel’s family embraces itself. One loss, one win.

And, I know Ryan already talked about it, but can we talk about that series of wins for a second? I also have a strong emotional reaction to seeing people cry, but I wouldn’t label myself as a sympathetic crier, as Ryan does at the start of this piece. In fact, decades of gender normative masculine-training and dozens of winters of Midwestern modesty have made my crying episodes extremely rare. I bet there’s even a record of the total number of times I’ve cried in the last fours years if you scour this website enough – it happens so in frequently, I’d certainly bring it up in a forum like this.

All of which is just to lay the track for this: Marko and Hazel’s reunion had me actively sobbing alone in my kitchen. Like, runny nose, stuttered breath trying desperately to get back into a peaceful, predictable rhythm, tears flowing freely. I don’t know that I can articulate how that moment works as well as it does. Part of it is obvious – we’re witnessing a reunion of characters: that’s always good for a tug on the heartstrings. But I think Hazel’s anecdote about her father going away to school really hit me. It might be my favorite piece of Vaughan’s writing ever, so I’m going to reproduce it here so we can try to get to the bottom of what’s so goddamn magical about it:

Dad once told me that when he got on a schoolbus for the first time, he started crying, because he was sure he’d never see his family again. And even though his parents were alive and well at the end of each day, he still got worried when the bus showed up in the morning. Despite his fears, my father said he actually loved being a student. School taught him how much he loved being home.

Vaughan lays a lot of groundwork for this speech earlier in the issue, painting “school” as something dangerous. And because the language is non-specific, the reader’s imagination has to graft external meaning on to phrase like “when you’re dealing with the youngest, most vulnerable members of our society, the worst-case scenario isn’t improbable, it’s inevitable.” Where’s your mind go? Mine goes to Sandy Hook, but whatever you’ve got in your head is equally effective. That’s the canvas upon which the above story is painted.

But Hazel’s story also invites emotional openness. She starts by letting us know that crying is part of this story, and the act of crying is linked to something emotionally non-spectacular: baby Marko misses his parents. Weird as it sounds, it’s permission to feel and express your deepest feelings about everyday wins and losses. At the end of it, though, I’m probably responding to that so much because I am (and probably always will be) a homebody. I love going out and I love seeing friends and doing exciting stuff, but there’s nothing quite so completing to me as coming home and being with the people I love.