How many Batman books is too many Batmanbooks? Depending on who you ask there ain’t no such thing! We try to stay up on what’s going on at DC, but we can’t always dig deep into every issue. The solution? Our weekly round-up of titles coming out of DC Comics. Today, we’re discussing Detective Comics 52, The Flash 51, and Midnighter 12.

Michael: Detective Comics 52 brings the brief and odd “Our Gordon at War” two-parter to a close. Though it was ultimately unsatisfying, Pete Tomasi and Fernando Pasarin’s arc “The Bronze Age” made the bold decision to have Gordon not rely on the robotic suit that had been a big part of his tenure as Batman. Somehow this issue gives us Gordon summoning the aid of the “rookie” suit all the way to Afghanistan like a freakin’ MegaZord.

The meat of the issue is Gordon suited up and teaming with his former brothers-in-arms as they beat the hell out of the followers of Amun-Set. Gordon has a final boss battle with Amun-Set himself, who has gained invulnerability by wearing the skin of his victims. I don’t have a problem with a Batman story that deals with otherworldly spirits and magics, but this just seems to come out of nowhere. The whole story is that way – there’s no life to it and it all feels so arbitrary. When I wrote about Detective Comics 51 I talked about how it was the realization of Frank Miller’s original Holy Terror book: Batman fighting the Taliban. Unfortunately Detective Comics 52 only reinforced that idea for me. The plans of Amun-Set and his followers are hollow and uninspired, and the fact that it’s all framed by the war in the Middle East makes these characterizations that much more offensive. Tomasi is a talented writer and I don’t believe that he had any bad intentions here, but the basic plot of “Batman and the marines beat up a bunch of savages in Afghanistan” doesn’t do him any favors. Either the story was cut a few issues short and/or Tomasi needed to focus more on upcoming projects. Whatever the case may be, Detective Comics 52 suffered for it.

There are bound to be discrepancies between Bat-books – like how Gordon has already hung up the cape and cowl in Batman – but they should still follow the same rules. The rookie bat suit is owned by Geri Powers and she approves of where it’s deployed. Therefore Gordon reeeeeally can’t just order it to come pick him up like an uber. This issue also reinforces my opinion that Greg Capullo’s should be the only artist allowed to draw Gordon in the rookie bat suit. Though Capullo doesn’t make the suit gigantic, artists like Pasarin make the thing look a lot more slender and non-threatening. In a book where a crazy cult leader is wearing the skin of dead marines, the creepiest image I saw was this: 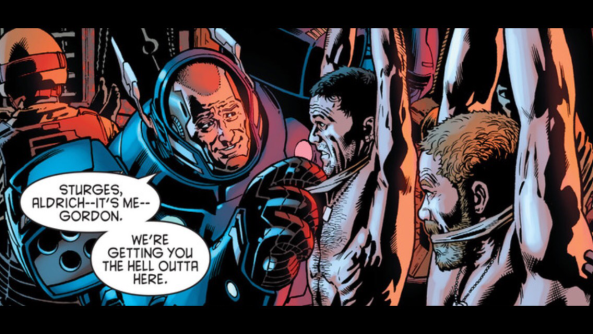 Spencer: Characterization is a hard thing to gauge in a medium where hundreds of different creators have handled the same characters. Sometimes you just have to trust your gut, so that’s what I’m gonna do: My problem with The Flash 51 is that I don’t like writer Van Jensen’s take on The Riddler.

Sure, at first it looks like a solid continuation of Scott Snyder’s “hyper-competent” Riddler, but Jensen misses the core of Riddler’s motivation: he’s not driven by the need for a challenge, as this issue purports, but by an obsession with proving himself better than everyone around him. I suppose that Riddler’s total domination of Central City and the Flash would do just that, but it’s missing his usual personal touch; more importantly, the Riddler likes to watch his opponents fail to surpass him and to rub those failures in their faces, whereas this Riddler almost seems bored by how much better he is than everybody else. That just doesn’t feel like the Riddler to me — this isn’t a bad story, but I’m wondering if it would be better served by a more appropriate choice of villain. I could see the Thinker carrying out this plot and it would make a lot more sense to me.

That said, I’m more bothered by The Flash revealing his secret identity when he turns himself into the Riddler. It’s a cliffhanger, so there’s still time for next month’s finale to redeem this moment, but as of right now it’s just completely out of left field — not only did Riddler not ask for Flash to reveal his identity, but Barry’s always been a character who’s gone to great lengths to keep his identity secret, including lying about it to the people he loves. If I’m being honest, this feels like a really contrived way to finally clue Frye on to the fact that the Flash (who he’s been hunting this entire arc) is in fact the man he raised as a son, a moment that’s been a long time coming. I just wish it could’ve been pulled off in a smarter, more in-character fashion.

Gus Vasquez and Joe Eisma split art duties this month, and in general I like both their styles — especially Vasquez’s angular, dynamic action sequences — but there’s a similar lack of care in some of their characterization.

Vasquez draws the Trickster as a fully-grown man, the same height as the Riddler, but he’s not — Axel’s still a kid, a fact that’s actually been front-and-center in this storyline (he originally worked with Riddler in order to gain respect among the rest of the older Rogues). This isn’t an unforgivable sin or anything, but when you put all these problems I’ve mentioned together, they lead to an issue that doesn’t seem all that interested in depicting its characters properly. I can’t think of anything more frustrating.

Frankly, this is a slightly underwhelming issue. Over its short run, Midnighter was a series that hit a lot of highs. But with so much left up in the air at the end of the last issue, Midnighter 12 fails to reach the upper echelon as it moves quickly to wrap up the many remaining loose ends: closing the book on the Suicide Squad and Waller dealing with Bendix, having to check in on Helena and Spyral, dealing with Apollo, plus finding some sense of closure in Midnighter’s civilian life.

The most exciting of these, of course, is seeing Midnighter and Apollo together again, but I also appreciated that Orlando found time for Midnighter to make a pit stop at the God Garden to check in with the Gardener.  There’s still so much unrealized potential in exploring Midnighter’s history, but it’s nice to see the Gardener and Midnighter interact again as the series comes to an end.

In our Best of 2015 round-ups, Retcon Punch praised Midnighter, writer Steve Orlando, and artist ACO for their stellar work. This book and this character are unsung gems in the DC universe. To my mind, the series deserved a proper send-off like the one afforded to Scott Snyder and Greg Capullo with Batman 51. I don’t want to talk too much about “Rebirth”—an event that has yet to happen—but I do want to say that Midnighter is a character unlike any in the DC universe. He’s more than just Wildstorm’s Batman. And while “Rebirth” promises a few encouraging developments for those of us looking for comics to broaden their appeal, I’m going to miss the confident queerness of Midnighter. Orlando leaves open the possibility of future team-ups with Helena, so I remain hopeful that we haven’t seen the last of our favorite smiling murder machine.