Drew: I had a bit of an identity crisis when I got to college. Well, “crisis” is an overstatement, but I certainly had to reevaluate how I defined myself. Some of that came down to being in a new place with new people, but the bigger part was that the things that distinguished me in high school, say, my passion and talent for music, were no longer remarkable in a conservatory full of musicians. I suspect this is a common experience for a lot of teens, even if the details change a bit (maybe it’s not college, but a music scene, or space camp, or whatever), which is why identity is such an important subject for them. Of course, for all of our struggles to further define ourselves, our identities are much more stable than those of comic book superheroes, whose identities are managed by numerous writers, artists, and editors, but are often split between costumed and civilian personas, and might even run into alternate versions of themselves. Suffice it to say, Cindy Moon was not in a great place to define (or defend) her personality even before she ran into her evil doppelgänger, which lends every decision she makes in Silk 8 an almost visceral tension.

Backed into a corner, Cindy spends this issue first trying to convince Mockingbird that she’s not the same Silk who has robbed every major tech company in New York, then trying to convince Black Cat that she is. We know the truth all along, which makes it particularly heartbreaking that Cindy is only believed when she’s not telling the truth, though it helps that she’s able to goose that lie with a genuinely honest moment: 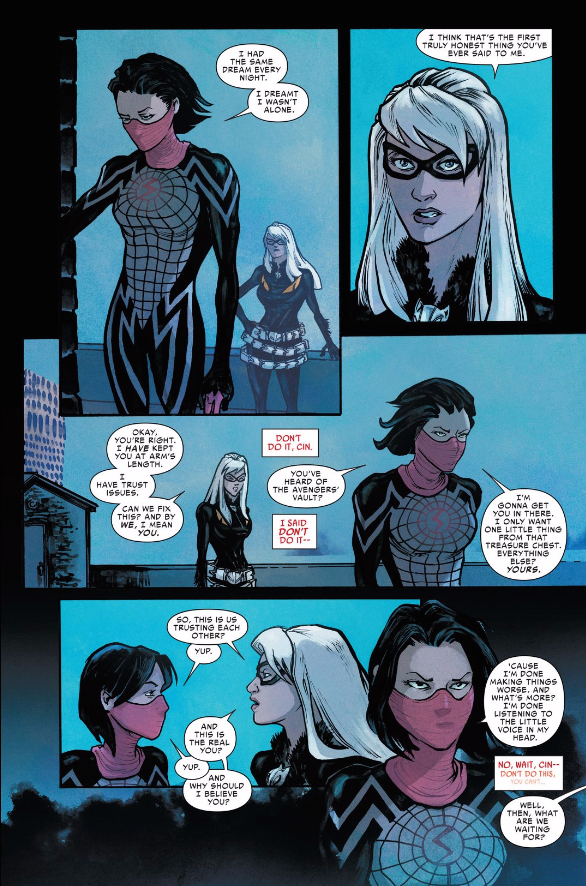 That free mixture of truth and lies gets even more complicated as Cindy pushes it to suit a heretofore unknown agenda: breaking in to the Avengers vault. We don’t know what her plan is, and the odd silencing of “the little voice in [her] head,” makes the prospect more than a little foreboding.

But, of course, there’s no real doubt that this is a feint. Cindy’s relative newcomer status does make her allegiances slightly less stable than, say, Captain America, but writer Robbie Thompson already juked us once with the double-agent reveal at the start of this volume. Fool me twice, as they say. But still, the way that voiceover is literally silenced makes this seem less like a ruse put on for Black Cat’s benefit. I mean, what does it mean to silence your internal monologue in that way? Was the series previously narrated by her conscience, a la Pinocchio?

My best guess is that her plan is to still defeat evil-Cindy, but may resort to less-than-moral means to do so. Specifically, by stealing the Avengers tech evil-Cindy mentioned in Spider-Gwen 8. In that way, this run will almost surely come to define her values: do the ends justify the means for Cindy Moon, or just the NEW Cindy Moon? Or, you know, maybe her plan is to get caught — the “Mockingbird comes around to Cindy’s doppelgänger” story is left intriguingly open.

Which is to say, Thompson has managed to squeeze a surprising amount of important characterization out of this crossover. It helps that the other Spider-Women play a pretty minimal role — Gwen disappears halfway through the issue, and Jessica is nowhere to be seen. That allows this issue to really dig into how this is all affecting Cindy, but should also add extra oomph to their eventual reunion. Things between Cindy and Gwen are decidedly tense when they part ways — a testament to just how much both of these characters are going through.

Spencer, I’ve been having a lot of fun with this event, but Cindy’s story has probably been the hardest hitting for me. Or maybe we’ve just been able to dig into these characters more as the event develops. Do you feel like you know Cindy enough to know what she is and isn’t capable of, and does that answer make this issue more or less exciting for you? And how about Tana Ford’s art? Or Ian Herring’s colors? I’m intrigued at how Herring divides the issue into warm and cool parts, which might just support the notion that Cindy really is crossing a line here. Oh, and do you have an identity crisis story of your own?

Spencer: Drew, sometimes I feel like my entire life has just been one never-ending identity crisis (there’s a lyric from my favorite band, Saves the Day, that I’ve always particularly related to for this exact reason: “You wanna know who I really am? Yeah so do I, yeah so do I.“). I have a ton of embarrassing stories about trying to base my identity around something I really had no right to — like when I introduced myself to my freshman class in high school as “the guy who mastered Kirby in Super Smash Brothers,” or that time I declared myself “the king of anime” after watching, like, only six series — but fortunately, none of these really ended in any sort of crisis. Instead, as I got older I simply realized that my identity didn’t revolve around any one thing, but that it stemmed from all the things I loved and from the ways I chose to express that.

The key there, I think, is that this revelation took time. That’s something Cindy Moon hasn’t really had — thanks to her years spent in isolation, she’s a good decade behind her peers in terms of personal development. Moreover, as Drew pointed out, most of Cindy’s post-bunker development has been muddied by the intricacies of superhero-dom and of being a double agent. Even the strongest of wills might lose their focus in a situation like this — poor Cindy never stood a chance.

In that sense, I suppose it also makes sense that everybody around Cindy is so quick to believe that she’s lost her way. 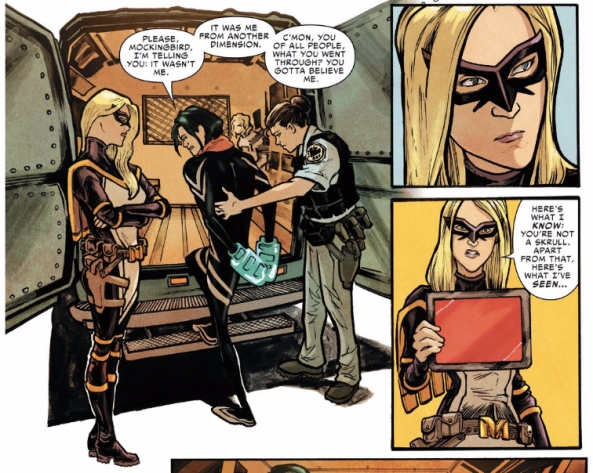 I mean, yeah, it’s frustrating when S.H.I.E.L.D. agents and other figures of authority ignore the very real, very common problems that exist within their fictional universe (evil dopplegangers and mind-control are shockingly common), and even if there wasn’t good reason to suspect that Cindy was telling the truth, Mockingbird still treats Cindy unnecessarily harshly — you would think that “hero-gone-bad” procedures would require putting Cindy in temporary holding until they could rule out all possible explanations or something.

Yet, I can still understand why Bobbi takes it so personally — she cares about Cindy, and clearly blames herself for allowing Cindy to remain undercover despite her own misgivings. She views Silk’s crimes as both a betrayal and a personal failure, and the biggest thing working against Cindy is the fact that she was starting to head in this direction even before her counterpart entered the picture. So yeah, Bobbi, and Gwen as well, are harsh, but not exactly unjustified.

That’s a shame, though, cause that’s exactly what pushes Cindy towards Black Cat. Writer Robbie Thompson makes it clear that Cat’s the only person in this entire issue who shows Cindy any understanding at all — where Bobbi instantly writes her off, Felicia gives her a chance to explain herself — but Ford and Herring expertly use the art to emphasize their growing connection as well. Drew mentioned that Herring’s use of warm and cool colors may show that Cindy’s crossed a line, but I think it better serves as a metric of how much stress Cindy’s under at any given moment. 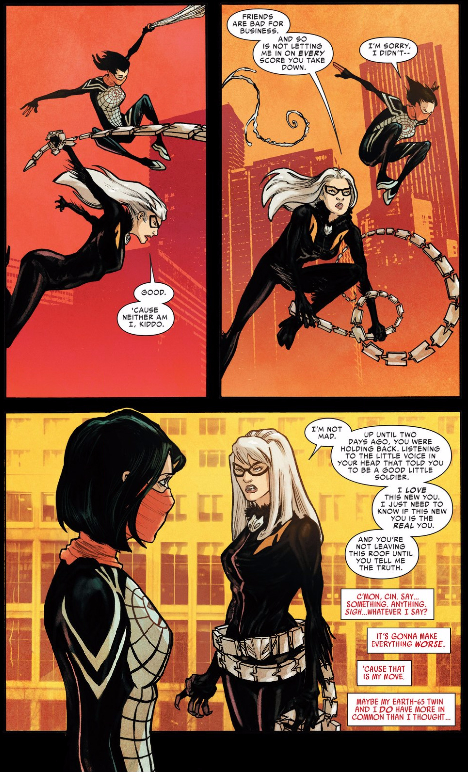 I’d say the first 3/4ths of Silk 8 — featuring Cindy’s capture, escape, and confrontations with Mockingbird and Black Cat — are full of conflict. Everyone is against Silk, and things keep getting worse for her. It all leads up to the moment I posted above, where the tension is so thick that it starts to choke out even the details of the background, replacing them with harsh reds, oranges, and yellows.

The next scene, though, finds Cindy opening up to Black Cat, and that’s where Herring switches to a cooler palette, letting Cindy and Felicia’s bonding throughout the rest of the issue be dominated by cool blues and purples. Black Cat is the only thing in this issue that calms Cindy down — the only person who actually makes her feel safe and appreciated — and the colors help highlight her newfound comfort.

Ford, meanwhile, finds numerous ways throughout Silk 8 to physically separate Cindy from the other characters, highlighting the widening gap between she and her friends. Usually this is done by putting Cindy inside a confined space, such as the S.H.I.E.L.D prison truck, and having whatever character is her antagonist at the moment glare at her from outside the space. 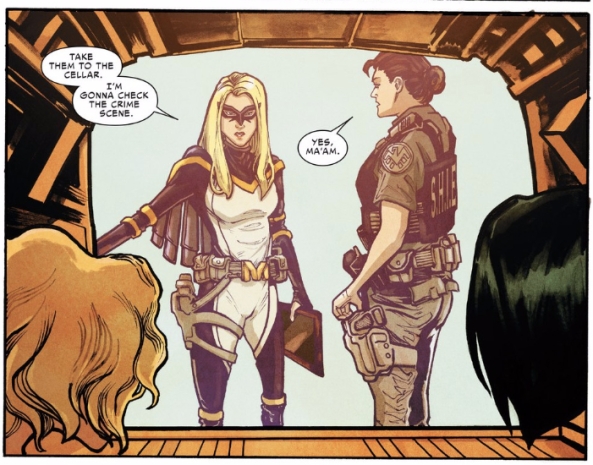 A few pages later, Ford essentially recreates this shot, only with Black Cat outside the truck instead. As the issue progresses, Cindy’s separation gets more severe — by the time we reach the second image I posted, even the panel borders and gutters serve to separate Cindy from the rest of Silk‘s cast. This doesn’t end until the image Drew posted — the panel where Cindy and Felicia share an honest moment finally puts them on equal ground within the panel, and by the end of the page Cindy’s even starting to infringe upon the space Felicia inhabits in other panels. This, again, serves to emphasize the solace Cindy’s found in Black Cat that she couldn’t find anywhere else.

Drew, you asked if I think I know what Cindy’s capable of, and I’ve gotta say, I don’t think she’s capable of deliberately hurting people. I agree with you that Cindy’s probably using Cat to get her hands on a device that can help her take down her dark doppleganger — essentially doing something bad with good intentions — but Thompson and Ford don’t hesitate to condemn this choice. The “death” of Cindy’s conscience (and yes, at least in this situation, Cindy’s internal monologue represents her conscience — what else would the voice inside her head be?) makes that absolutely clear, but Ford approaches this in a more subtle way.

Okay, here we have footage of the evil, Earth-65 Cindy Moon framing “our” Cindy for crimes, in a way Bobbi describes as especially brutal. Take a look at the fourth image in the bottom right corner, and then check out the final page of this issue. 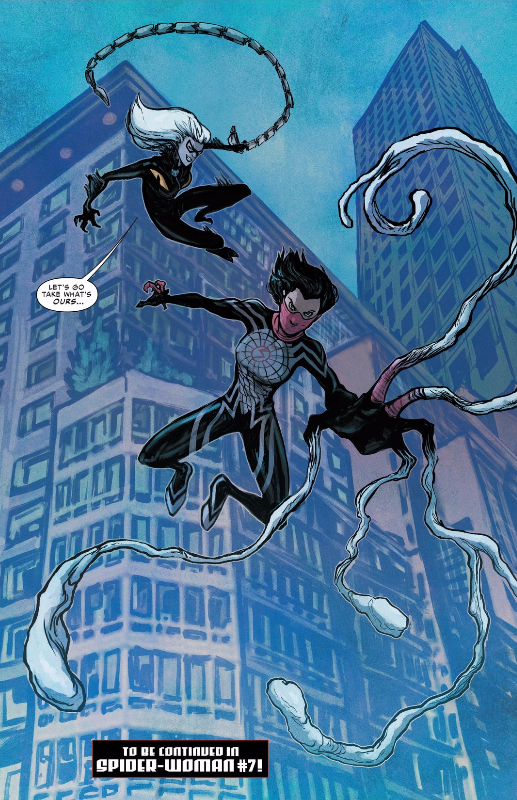 Cindy’s in almost the exact same pose, and it’s not a pose she’s often struck before this point. By bending her morals, by genuinely confiding in and legitimately working with the Black Cat, she’s become far too similar to her own dark doppleganger. That’s scary stuff.

Man, the more I dig into Silk 8, the more impressed by it I am. The fact that good characters do bad things and bad ones do good, and yet every action is backed by believable, well set-up motivations, is extraordinary enough, but the fact that all this unfolds within the confines of a crossover is even more astounding. Cindy Moon may still be searching for an identity, but with this issue Silk has cemented its identity as a top-notch title.