Drew: Loath as I may be to name-check Tim Burton’s Planet of the Apes remake, it represents the single most recognizable example of “Not His Sled” — the trope where a well-known twist is subverted in a remake, offering an entirely different twist (though they don’t necessarily have to be as perplexing as that Planet of the Apes ending). Less a remake than a freely interpreted riff on all of TMNT history, IDW’s Teenage Mutant Ninja Turtles has mixed familiar elements with totally new ones to create something that is at once respectful of its history without being tied to it. In that way, “Not His Sled” has never quite fit — it’s never followed a specific plot so closely to imply a specific twist, but there are still plenty of expectations that can be thwarted. Issue 56 left us guessing who would have massacred those defenseless Utroms (along with Fugitoid), and while we didn’t have a ton of clues, our familiarity with the characters in play from other iterations of the Turtles seemed like a good indicator. Issue 57 reminds us that, as helpful as that familiarity may be, it is just as likely to be used against us.

So, you know: spoiler alert. But…Patrick was totally right: it looks like Leatherhead was the one behind the attack all along. It’s an effective surprise not only because he seemed like an ally in this series, but because he had generally been an ally in Turtles stories, generally. Obviously, there are exceptions — he was a bad guy in the 1987 cartoon, and tends to be pretty opportunistic in who he allies with in other interpretations — but there didn’t seem to be any motivation for him to kill the Utroms (at least, not after coming to accept that he was leaving Burnow Island). That’s not to say that the reveal doesn’t work, just that I didn’t see it coming. Patrick did, though, so hats off to him!

I’ve actually been thinking a lot recently about what information we can glean from other incarnations of the Turtles. In particular, I’m curious about Ch’rell, the war-criminal Utrom Fugitoid opted not to revive in the previous issue. His absence seems to be a sticking point for the surviving Utroms, which include Ch’rell’s sister. The reason I’m so fascinated by this particular Utrom stems from his role in the 2003 cartoon series — a version of the turtles I’m largely unfamiliar with. However, in that series, Ch’rell was the true identity of the Shredder. That exact twist probably isn’t what’s going on here, but given the hints that mutagen might somehow have facilitated Splinter and the Turtles’ reincarnation, it’s not impossible to imagine that Ch’rell could come to be Shredder (or vice-versa — brain-swapping is confusing). Which is a long-winded way of saying I have no idea what might happen with Ch’rell — maybe history is an indicator, maybe it isn’t — but we can’t really rule any possibility out. That sense that anything could happen has always been a strength of this series, but is downright inspiring in light of how much history it could be tied to.

Anyway, that’s enough predictions. The other great strength of this series continues to be its remarkably dynamic art, which is on full display in this issue. I’ve always been impressed at the way artist Mateus Santolouco is able to lend a sense of motion and drama even to the most banal talking-heads scenes, but this issue reaches even greater heights. Check out how Santolouco is able to emphasize the tragedy in the death of a squishy talking brain: 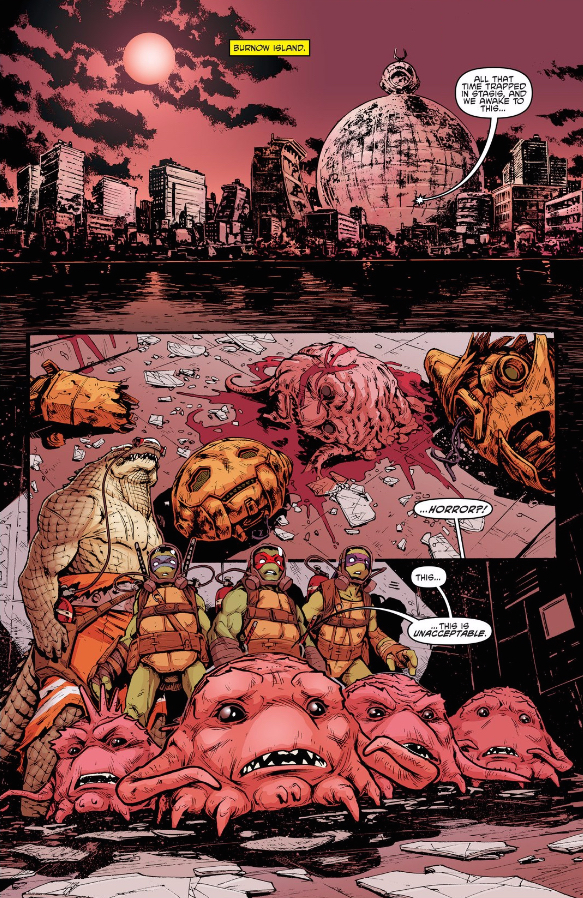 This page is relatively straightforward, following an exterior shot with a graphic-yet-frank interior shot of the murder scene. It’s not until Santolouco swings the camera low, to eye-level with the surviving Utroms that we really start to feel the horror of this death. Santolouco’s ability to communicate emotions on even the most alien faces has always been a boon to this series, but it’s absolutely essential here. He brings us to eye-level for their reaction shot, setting the emotional tone for the argument that follows.

It’s a fantastic opening, but it’s actually the next shot of the murder scene that really sells this sequence for me, as Santolouco holds that eye-line for the reverse-shot: 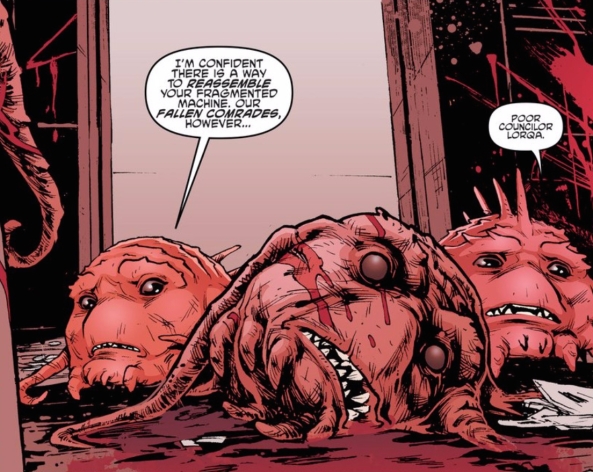 It’s largely the same content as that first page, but it’s packs much more oomph. Obviously, there are other factors that lend this image more drama — the tighter shot, the fact that the horror and reactions to it are captured in a single image — but I think the camera angle is a huge factor here. We’re no longer looking down on this weird little pink thing who got murdered, we’re looking straight ahead at the corpse of our dear friend and colleague. That shooting the shot from so low also emphasizes the blood spatter behind Lorqa is an added bonus, upping the horror along with the emotions.

Geez, Patrick, I could talk about Santolouco’s shot choices all day. I’ll cut myself off here, but only because I’m reasonably confident you’ll highlight that double-pager where Leatherhead takes down that Mouser. Don’t let me down!

Patrick: Ah, prompting me to analyze a specific page to distract me from gloating! Very well, I’ll put aside my #PatrickWasRight campaign, but only because the splash is questions is so fucking hot. Let’s toss the whole thing up here first, just to bask in it’s glory. 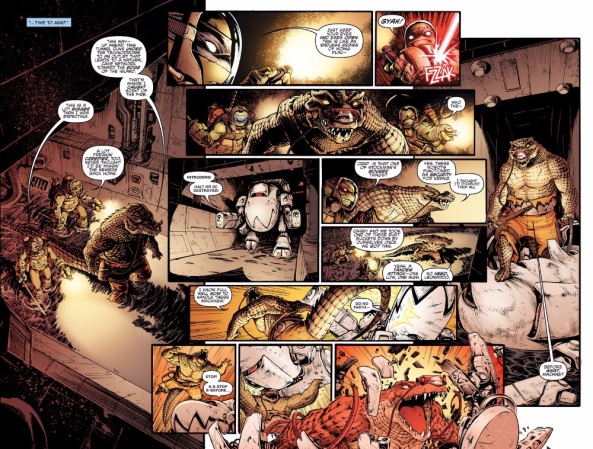 The first thing to notice about this spread is that we’re basically seeing the cover again on the left side of this page. That camera angle is the same, the characters are all in the exact same poses, even the signage and pipes are identical. This is an image that we’re already familiar with — not only is it the first thing you saw when you picked up the issue, the reader’s experience with that panel begins before they even decided to read the thing. You can’t help but bring all of your pre-reading-issue 57 assumptions along to this panel — including our impressions of this gentle-as-fuck version of Leatherhead. He’s their guide, for crying out loud!

But this spread is also profoundly interested is addressing the character’s savagery. Raph and Leo are all set to launch a coordinated attack, but Leatherhead just tears the thing apart. The direction of the action here forces the reader’s eyes to snake back and forth across the page-divide, emphasizing not only the whip-like motions of Leatherhead’s fearsome tail, but also subtly hinting at themes of deception (y’know, like a snake). That… I don’t even know what you’d call it… the last image on the bottom of the page of Leatherhead ripping the mouser in half disobeys the rule of law set forth by all the previous panels in this fight — look how his whirlwind of destruction extends backwards two panels and forward another, even violating the gutter. And then large panel on the far right, it’s as though Leatherhead realizes he may have tipped his hand too far, and the panel allows for a huge white gutter, which the gator man once is once again dutifully deferential to.

There’s almost a running theme throughout this issue that politeness is not to be trusted. The Utroms are almost aggressively polite and diplomatic throughout this process, routinely giving the Turtles the benefit of the doubt. Even as Donatello repeatedly puts his foot in his mouth, the Utroms make rational, likable decisions, never presenting themselves as anything but totally trustworthy. By the time we get to the end of the issue, Leatherhead’s politeness is called into question, so it’s only fair that we’d apply the same scrutiny to our squishy pink friends here. Drew does a nice job of articulating why we should be so concerned about Ch’rell coming out of stasis, but I’d also argue that Santolouco does the same with one simple drawing. 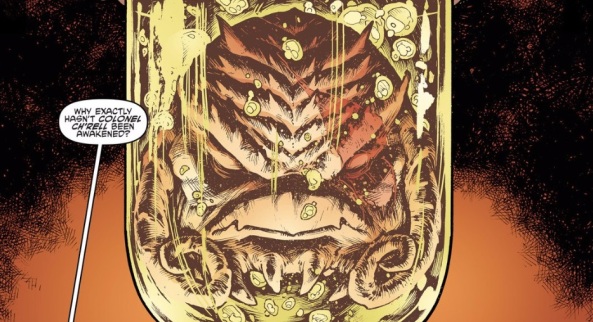 This is one of those inkier Santolouco drawings, implying both severe lighting and the harsh textures of Ch’rell’s… skin? Both of those indicate that he’s a fearsome force, but Ronda Pattison’s colors take that assertion one step further, the sickly greens of the ooze playing horrifically against the burning red lights of the lab.

In both of these cases — Leatherhead and the Utroms — I’m not sure we totally understand what motivates these parties to present one thing and want something so different. The Turtles are arguably being manipulated by everyone else in this story, and their only goals are to a) repair their friend and b) figure out what happened. It’s a weirdly passive role for the titular heroes, but it adds so much weight to the introduction of Leatherhead (who, I suppose could also be considered a “titular hero” — his name is the title of the story arc). He’s got a proper introduction, like Slash or Hobb, and I look forward to him being a part of this universe going forward.