Look, there are a lot of comics out there. Too many. We can never hope to have in-depth conversations about all of them. But, we sure can round up some of the more noteworthy titles we didn’t get around to from the week. Today, we discuss Archie 8, House of Penance 2, Jupiter’s Circle Volume 2 6, and Teenage Mutant Ninja Turtles 58.

Patrick: I’m always impressed by the sheer amount of plotting in every issue of Archie. A story is seeded, introduced, explored and resolved all in one 22-page volume. It’s especially impressive when you consider just how much page-space Mark Waid and Veronica Fish spend being hilarious. Hell, the first page of the issue a splash-page joke – Archie, in a criminal line-up with a trophy stuck to his head, and Mr. Lodge pointing accusingly, saying only “Him.” It’s a great use of space though, and not just because it means I started the issue with a chuckle in my heart, but because it features seven cast members, and the drawing illustrates something meaningful about five of them. First, there are the obvious Archie, Mr. Lodge and Veronica, who are are clearly expressing themselves and their power dynamic here. But we can also see that Betty and Jughead are flanking Archie, and both end up being closer to him on the page than either of the Lodges.

And it’s not like Betty or Jughead offer any kind of active support to Archie in this issue, but that’s not really the kind of help he needs. He needs emotional support, and they can supply him with that. In a move to get Archie the fuck out of his daughter’s life, Mr. Lodge has offered Fred Andrews a job… in Singapore. It’s a master plan that leaves Archie powerless to mention it to his father for fear of shattering his dream (of making three times as much money!). I find it fascinating that Archie doesn’t win the day by counter-scheming, but by confronting Mr. Lodge directly and expressing himself. That’s a sweet reminder about the power of honesty and human connections.

AND ALSO THERE ARE KITTIES IN THIS ONE. Veronica goes shopping for Orange Cat in this issue, and she naturally wants the cat to match her boyfriend. She ends up picking the worst cat because he’s right color, but I’m just in love with Fish’s drawings of these other two cats. They’re both just exactly like Archie, even adorably expressing confusion in the same way.

What happened to those two kitties? Can I adopt them?

Ryan D: House of Penance returns to fulfill many of the terrifying and fascinating promises it made in the first issue. This issue, Peter J. Tomasi and Ian Bertram take us deeper into the mania of Sarah Winchester, as some of the rational behind her hysteria is slowly revealed and her particularities begin to make more and more horrific sense. The gun-for-hire Warren Peck, newly arrived to the Winchester House and still bearing the wound suffered at the hands of a Native, finds himself trying to make heads or tails of the mansion and its bamboozling design, all the while being tormented the simmering tentacles of curse which plague both him and Sarah.

House of Penance is deep and rich in both concept and execution, but what stuck out to me in particular is the pacing of the issue. The creative team introduces new ideas and dynamics through lazy conversations between workers before throwing us into an anxiety-ridden sequence featuring Sarah trying to hammer the physical manifestations of her delusions away. Pages like this actually raised my heart-rate: 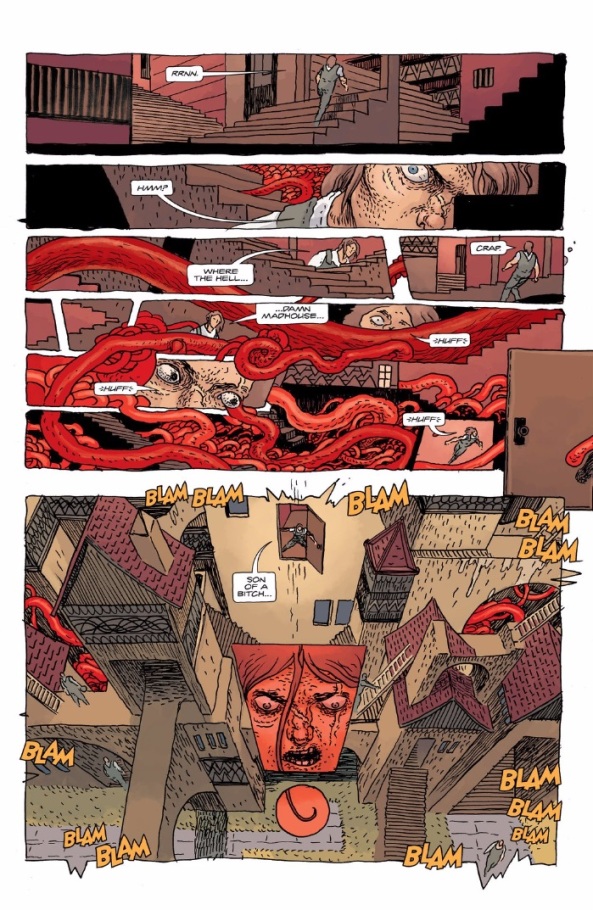 This page is just tremendous. The mix of wide establishing shots crammed next to extreme close-ups, tied together by the menacing tendrils of what is either curse or madness which have no regards for the panels or the gutter. This page alone makes me feel both claustrophobic and and agoraphobic.

That, to me, is what makes House of Penance such a treat: it’s making me feel; I am physically effected by it. Reading this title is not solely an intellectual exercise. The last title which played with me like this was Morrison’s Nameless, and I think HoP stands a chance of surpassing that title if it keeps on track. For my money, Tomasi and Bertram- while only two issues in- have started us down a horrifying path which might just be the best journey that you’re not reading right now.

Drew: Of all the reasons Jerry rejected one of his many paramours on Seinfeld — “she had man-hands!” “I kept trying to picture her naked, she kept trying to not picture me naked.” — one of my favorites comes from “The Sponge,” where Jerry claims that his new squeeze, Lena, is “too good.” “I admire the hell out of her.” Jerry explains, “You can’t have sex with someone you admire.” While that exact sentiment may speak to Jerry’s “callous indifference and utter disregard for everything that is good and decent,” as Judge Vandelay put it in the finale, it’s funny because there’s some kernel of truth to it — being with someone you genuinely feel is superior to you in every way can only leave you feeling inadequate and insecure. That’s precisely the state Jane finds herself in in this issue, as Sheldon moves to become even more selfless than ever.

Of course, Sheldon is the protagonist of the issue, which makes it less about feeling unworthy as it is about the personal costs of selflessness. Sheldon hasn’t just sacrificed his time and money to make the world a better place, he’s sacrificed his personal life, as well. It’s a heartbreaking turn until Millar pulls in Lady Liberty, reminding us that she’s been alone for basically the same reasons (though her struggles have been exasperated by the power structures of misogyny). It’s a conclusion we all knew, thanks to Jupiter’s Legacy, but one I somehow didn’t see coming — perhaps because Jane seemed so happy up until this moment.

This issue brings this volume to a close, wrapping up its various threads with a Wire-style finale montage, checking in with every character, sending them off in directions we can more or less extrapolate into the beginning of Jupiter’s Legacy. Some outcomes we already know — the Teen Scene’s flirtations with corporate sponsorship, for example — but others, like George’s vow to kill Walter, may still play out in volume 2 of Jupiter’s Legacy. It’s a brilliant use of a prequel, acting more as a mid-story flashback than a post-facto “don’t you want to know what Darth Vader’s mom looked like?” exposition-fest, effectively deepening our understanding of some conflicts, while planting the seeds for others. I can’t wait to see how this all plays out.

Taylor: For all intents and purposes, the modern conception of a monster was first created in 1818 when Mary Shelley wrote Frankenstein. Much later our idea of what a monster is was solidified when Bram Stoker published Dracula, and the world of our fears has never been the same sense. While it would be an overstatement to say all modern monsters hail from these two Gothic creations, certainly most take a couple cues from these famous monsters.

In TMNT 58 the idea of  the monster is recast in the role of Leatherhead. Much like Frankenstein he is a creation of science who is misunderstood. Having been inadvertently created by pirated mutagen, Leatherhead was captured by Krang and later tortured when he no longer fit into his master’s plans. Filled with anger, he now seeks revenge on all the Utroms and will kill anything that gets in his way. For the origin of a monster, this is pretty standard fare. What truly makes it special, though, is the way Mateus Santolouco and Ronda Pattison use light and shadow to cast Leatherhead in the image of Frankenstein and other famous monsters. For starters, check out this panel of Leatherhead as he’s about to attack Donatello.

His imposing stature aside, what really makes Leatherhead monstrous here is his looming shadow. The way Santolouco and Pattison have placed the light source in the panel distorts Leatherhead’s in an outline that exaggerate all of his fearsome features, namely his size, his teeth, and his scales. The panel seems to suggest something threatening in Leatherhead with this huge shadow while at the same hinting at the fact that this is not what he actually is. After all, the real Leatherhead standing right there, while not cuddly, is less imposing. While this use of shadow itself creates a mood reminiscent of monster movies, Santolouco and Pattison use lighting elsewhere to the same effect. When Michelangelo discovers Leatherhead’s betrayal the scene is painted in high contrast shadows that lend it a certain Gothic feel. 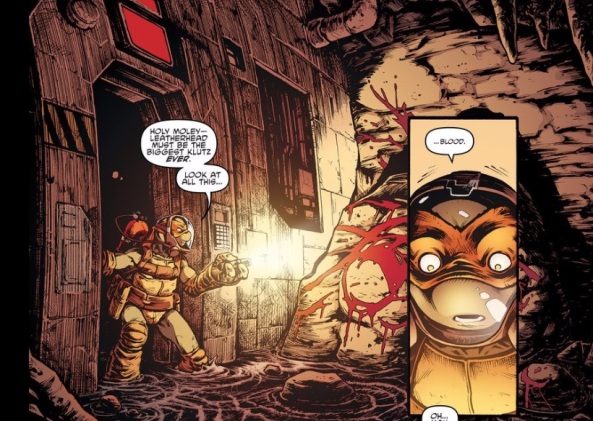 This panel easily looks like it could have stepped out of any number or horror movies and the biggest reason for that is the use of shadow. Mikey’s single light source necessarily creates shadows and areas he can’t see. This creates a wonderful tension by forcing us to wonder what exactly might be lurking in the shadows, a staple of any scary movie or book. The fact that blood is spattered everywhere might also have something to do with the horrific nature of this panel.

In retrospect it seems like a concentrated effort on the part of the TMNT creative team to make this Leatherhead story-arc resemble a Gothic/horror/mystery narrative. In doing so they’ve cast Leatherhead as the monster but like all excellent examples of this genre, Leatherhead is more than what his outward appearances actions would suggest. He has motives for his actions, some of them quite justifiable, and he leaves us much in the same way we first met him. He’s still terrifying but in a way he doesn’t seem to be all that evil. Basically, he is still a mystery. Whatever the case may be, Leatherhead may be a monster, but just as with Frankenstein, maybe it’s the way he’s been treated that is most monstrous of all.