Look, there are a lot of comics out there. Too many. We can never hope to have in-depth conversations about all of them. But, we sure can round up some of the more noteworthy titles we didn’t get around to from the week. Today, we discuss Robin Son of Batman 12, Citizen Jack 6, Jughead 6, Lumberjanes 26, and Scarlet 9.

Mark: I propose a brief moratorium on Talia al Ghul stories until someone can muster up a fresh take on the character. I think we can do better by this complicated figure than inserting her into Damian stories purely to exclaim “But I’m his mother!” before whisking her away to the same warehouse DC editorial stores all of its characters who have given birth. The idea of Talia al Ghul is great, but she’s been watered down to such a degree over the years that she is no longer threatening in any regard.

The family dynamics of Bruce Wayne-Damian-Talia are potentially fascinating. Too bad they’ve long been reduced to literally pointing fingers at each other like DC’s version of Kramer vs Kramer. No wonder Damian considers Goliath and Maya to be his real family.

Robin: Son of Batman 12 is a by-the-numbers affair all around (although it does feature one of the more egregious cover/contents disparities in a while: featuring Damian on the front fighting a T-Rex compared to zero dinosaurs of consequence inside). The fact that Midnighter was forced to wrap everything up by the end of issue 12, but Robin: Son of Batman is inexplicably getting a #13 next month to close out its run defies explanation.

Patrick: The hook to this series — that Jack Northworthy’s political ambitions are personified by a literal demon — has always been a bit unnerving. Marlinspike represents every ugly impulse towards pandering to the basest human desires for safety, superiority and simplicity. Even Jack’s origin story with Marlinspike is aching simple and ugly simultaneously. We get to see that hockey accident again in this issue, and that scene is starting to feel like an emblematic part of Jack’s identity for the reader. That’s literally the only way he works — as a character, as a candidate — Jack’s story needs to be compelling, and then all other policy discussions take a backseat to a powerful narrative. But that’s concept always struck me as reductive; it’s hard to have a measured conversation about people with differing political opinions when you characterize them as under the influence of a demon.

But that’s where Citizen Jack 6 distinguishes itself, both by showing us how quickly people scramble to fit into the demon’s plans instead of resisting them and by introducing a second politician-whispering demon. The opening scenes of a drunk, suicidal Northworthy are dark and beautiful, but they are more of the series-same. It’s not until the American people actually vote the motherfucker in office that we start to see some inventive ugliness. Even Cricket (who seems to have healed nicely) has totally caved to Jack’s apparent power. I love the way Sam Humphries and Tommy Patterson stage the announcement on the page, giving Cricket a halo of Northworthy supporters. 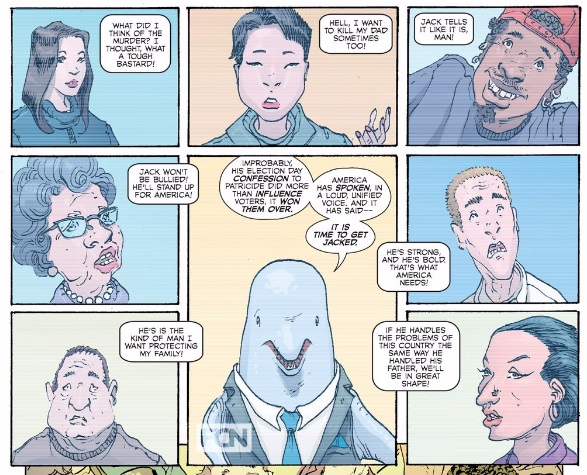 Elsewhere, we see Jack’s ex-wife angling for her new position in Jack’s power-structure. Lois doesn’t have her own demon, but she certainly does line up to serve a one all the same. There is a perceived reality — that Jack is going to be powerful — and she does whatever she can to fit into that reality. That’s the more damning condemnation of the American political process: inertia is too great to fought against.

But then again, maybe it’s not just American politics. By issue’s end, we’ve been introduced to a second demon. He’s an older, more stately gentlemen who has been “assisting” the British Prime Minister, presumably forever. The obvious conclusion to draw from this is that our political system is the offspring of the English system, essentially suggesting that we’re fucked forever in perpetuity throughout history. Grim? You bet!

Ryan M.: The conclusion of the first arc of Chip Zdarsky and Ercia Henderson’s Jughead owes a lot to Scooby Doo or maybe Agatha Christie. At the start of the issue, Jughead is utterly defeated and, by the end, Stanger is gone and the status quo reestablished. It feels almost too neat when the confrontation happens at the big dance and the truth about Stanger is revealed. Jughead plays Poirot as he explains how he deduced Stanger’s plans and presents his secret weapons in the form of Mr Lodge and Colonel Keller.

The amount of exposition in this sequence doesn’t leave much room for the jokes and weird fun of previous issues. We even revisit an old alternate version of the gang as super heroes during the requisite fantasy/dream sequence. While we don’t get nearly as much time in fantasy land, the Halloween Dance allows the gang to coincidentally wear the outfits from earlier in the series. There is a lot to wrap up here, so Zdarsky is more judicious than usual with the sass and the gags, though he does gives us a Dilton dance sequence.

It is this kind of playfulness that makes this series such a joy to read. This issue may not have had as many lough-out-loud moments as previous issues, but it is satisfying to see Jughead and the gang win in the end.

Taylor: There’s a reason why people, both Otaku and casual viewers alike, enjoy the films of Hayao Miyazaki. Films such as Spirited Away, Princess Mononoke, and My Neighbor Totoro do an excellent job of creating worlds that are at once totally unique and familiar. This is all the more impressive because in all of these films, bascially anything can happen, but it all feels natural. Lumberjanes 26 reminds that this series is capable of exactly the same things that make Miyazaki films great.

Issue 26 is a direct continuation of the events in issue 25, which is to say the Janes are scrambling after their camp director and elders were snatched away by a giant bird. Naturally, it is the Janes who jump into action to rescue these bird-napped individuals, but as always, it’s the way they go about doing this that’s wonderful. Previously the Janes had discovered a cache of kittens with amazing powers, and it’s one of these that helps them chase down the evil bird of their nightmares.

The giant cat certainly reminds me of the Cat-Bus from Totoro, but more than that, it reminds me that anything can happen at the Lumberjanes summer camp. For context, this embiggend cat was the Janes’ last resort after they realized they wouldn’t all be able to chase the giant bird on top of one moose. I think it’s the rare comic that can combine mutant kittens, killer birds, and adventure all into one story and actually make sense. This is just pure imaginative joy, and its wonderful to read a comic that is so self-assured in its absurdity.

All of this is to say nothing of Ayme Sotuyo’s charming artwork which feels perfectly in sync with the writing of Shannon Watters and Kat Leyh. The talented women working on this comic month in and month out have ensured that no matter how unpredictable the events contained within its pages, each issue will always be predictably wonderful.

Drew: Have you ever heard that oft-quoted fact that attractive faces are harder to remember? I have no idea if it’s true, but it makes sense to me that it would be; the closer we get to the platonic ideal of something, the more generic it becomes. For that reason, we tend not to really pursue platonic ideals in art, at least not since the advent of modernism. Leaving off bleu cheese probably makes a hamburger closer to the abstract ideal of hamburgerness, but it also makes the burger less interesting. I tend to map that continuum — with boring idealized forms on one end and interesting unique ones on the other — directly on to narratives, but Brian Michael Bendis and Alex Maleev’s Scarlet 9 demonstrates just how effective non-specificity can be as a narrative device.

Confession: I have not read any previous issues of Scarlet, so I have to admit that there is likely a lot of specificity that I’m missing, but as an introduction to this series, this issue leaves the situation open enough to comment on basically every police shooting, ever (but especially those that have happened within the past two years). All of the lines seem designed for maximum ambiguity, referring to the “cops” Scarlet killed, or the “cop” who shot Scarlet, or the “cops” who want to kill Scarlet. I didn’t expect issue 9 to fill me in on the whole backstory, but the way it avoids doing so seems intentional, highlighting the parallels to countless police shootings that have happened over the past few years.

Of course, this is a comic book, so the resolution ends up being a little less by-the-numbers, closing with a shootout that ends with Scarlet freed and inviting Special Agent Going to join her revolution. It’s a welcome twist, immediately distinguishing this series from so many other procedurals, but the biggest success is in just how chaotic the shootout is.

It’s not always clear who’s who in this fight, and jarring closeups like the one of Goring’s foot on the gas pedal only heightens the confusion. As the sequence plays out, sound effects take up an increasing amount of space in the panel, further emphasizing the chaos of the scene. It’s an explosion of action after an issue that is otherwise pretty still — the violence Scarlet suffered at the opening of the issue is told in single images in the past tense, giving this one an extra sense of kineticism.

That sequence — and the twist it represents — are more than enough to bring me back for issue 10. I may still be piecing the story together, but there are enough rewards here to make that task feel worth the effort.