Taylor: In middle school I was a wallflower. I would go to dances with the hopes of dancing with a girl only to find myself retreating to the sidelines once the first few bars of a slow song wafted their way across the gym. By doing so I guaranteed my safety, even though that also guaranteed my mission to dance with a girl would fail. There was, and continues to be, safety in fading into the background. There, you aren’t the focus of attention, you can be overlooked, and most importantly, you’re just part of a larger tapestry. But that doesn’t mean you’re any less important than those people on the dance floor; you’re just different. The same can be said for comics, where background, while often overlooked, is an integral part of the art, as All-New Wolverine 9 demonstrates.

The box has been opened! What was once inciting is now repulsive, for the box contains Fin Fang Pheromone! That’s the reason he’s attacking Agent Hill’s helicarrier. Wolverine jumps into this monster’s mouth to rescue Logan and then douses herself in more of the pheromone to draw the beast away from New York and towards his ultimate comeuppance. When she returns from her adventure on her jetpack, the recovering Logan lets it drop that he recognizes Laura’s apartment because it’s where he raised her!

From this, you get that this issue is pretty zany and a fun time, which in many ways it is. However, there’s something about this issue that bothered me upon reading it. At first I thought it was the artwork of Marcio Takara, but that’s not the case; it’s actually the absence of his artwork that bothers me. More to the point, many of the panels in this issue lack any sort of defining background. Many are solid colors, some even whitewashed, with only the tiniest hint of artwork to give me context for the scene I’m reading. For example, look at the panel where the S.H.I.E.L.D. helicarrier is plummeting to the ground.

That’s a whole lot of white (or near white) on the page. Aside from the smallest of skylines at the bottom of this page there is very little reference here to help me understand what is happening. It takes what should be an exciting panel, Iron Man and Captain Marvel rescuing a crippled helicarrier, and makes it bland. Takara tries to offset the huge amount of white with the vertical contrails of Iron Man and Captain Marvel as they swoop in to save the day. This does indeed help, as it creates a natural line my eye follows which gives me the sense that the helicarrier is indeed falling from the sky. But I still have no idea how high up in the sky this action is happening. The lack of sun or clouds in the background placed relative to the horizon make this hard to tell. If some more reference points were included in the background the panel would work much better in creating tension. It could show how close the helicarrier is to crashing and thus make Iron Man’s and Captain Marvel’s action’s all the more heroic.

Panels like this, with no true background abound in this issue and hold it back from being a more entertaining read. The frustrating thing about this is that Takara obviously understands how valuable a good background can be. Take for example the panel when Fin Fang Foom smells pheromone drenched Wolverine and instantly falls in love.

The background here is a huge heart that makes the action in the foreground abundantly clear! There’s no mistaking what this giant symbol means and it feeds the action of the panel rather than detracting from it. Further, the heart is just plain silly in the best way possible. This two-issue arc is a fun little story and it only seems natural that giant hearts should make an appearance somewhere. In short, this background accentuates what writer Tom Taylor is trying to do with his script.

What exactly Taylor is trying to do isn’t a mystery. He’s telling the simple story of being eaten by something huge and the tribulations one undergoes in the literal belly of the beast. Lest you think this is an oddball story, recall the story of Jonah and the whale, which dates back some 2,000+ years. Then consider the Magic School Bus book that takes place in the human body, or when the crew in Futurama dive into Fry’s stomach, and it becomes clear this is a reoccurring theme in our culture. 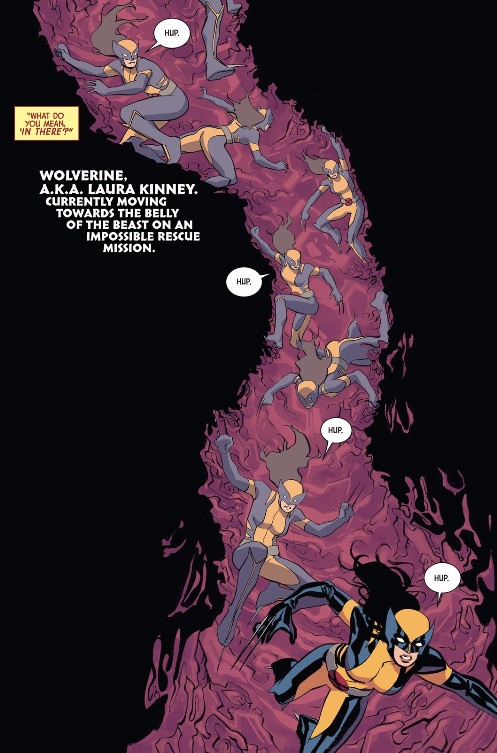 I’m not sure why diving into the body of a living organism is a story that has been told over and over, but Taylor is clearly adding the next chapter to its pages. Naturally, it’s hard to take such a story all that seriously, and it’s clear Taylor is having fun in this issue when he burns off Logan’s legs with stomach acid. Basically it’s a fun take on the journey to the underworld, and I enjoy how Taylor keeps the issue flowing with little quips and fast paced action.

Spencer, what are your thoughts on this issue? Were you bothered by the lack of backgrounds as I was? What do you think of Logan’s reveal at the end of the issue? And most importantly, what do you think the inside of Fin Fang Foom smells like?

Spencer: If Foom’s eating Wolverines, then I assume it must be pretty musty down there in his stomach. Combine that with the acid, and maybe you’ve got something like a lime-tinted musk? I dunno. I’m spitballing.

Anyway Taylor, prior to reading your lead I was actually planning to praise this issue for its backgrounds. Weird, right? I’ll admit, though, that there are troubles with the helicarrier scene. It is indeed hard to tell exactly how high or low the helicarrier is in any given moment — near the end of the issue, as Laura leads Foom away like the Pied Piper of Fin Fang Pheromone, Takara and Taylor finally give us a bit of scale, showing that Foom towers over the buildings of NYC, which means that the helicarrier was probably hovering right around the skyline for most of the issue. That moment, though, comes too late to help us contextualize this sequence as it’s happening.

But like I said, that wasn’t something I noticed until you pointed it out, Taylor. The helicarrier-related moments that confused me were the ones where carrier is viewed from above.

In the scene Taylor posted, it’s entirely clear the the helicarrier is in the air but is falling, even if we can’t tell exactly how far. When viewed from above in this scene, though, it’s almost impossible to tell whether the helicarrier is in the air or not. It really looks like the helicarrier has already crashed in the water in this sequence, even though we see it in the air again on the next page. I’m not sure if this is a problem with the backgrounds, or the angle, or with Takara’s perspective, but it definitely took me out of the story for a minute.

Still, aside from any helicarrier-related confusion, I’m actually rather fond of the backgrounds throughout All-New Wolverine 9. Takara creates unique backgrounds for each new “set” (the deck where Hill and Gabby stand, Fitz’s lab, Fing Fang Foom’s stomach, even Laura’s apartment), and while he does choose to fill a fair number of backgrounds with color rather than detail, he doesn’t do this until after he’s already established the set. I never felt confused about where any scene was set or how the characters interacted with the environment around them.

The “backgrounds” that impressed me so, though, weren’t the actual detailed ones, but the more colorful, abstract ones. The “heart” background Taylor posted is possibly the best panel in the entire issue, but here’s another one I absolutely adore:

It’s a simple pattern that Takara and/or colorist Mat Lopes have come up with, but the unassuming nature of the pattern — combined with the sweet, cool shade of pink chosen — perfectly suites Gabby’s naive, sweet nature. The background here reflects the character more than the “reality” of the scene, and I always appreciate that.

Lopes and Takara continue this trend in many different ways throughout the issue. Captain Marvel enters the scene in a cool, abstract flash of orange and yellow, and similar colors are used to create speed lines as Carol and Tony attempt to slow down the helicarrier as it plummets to the water. So this technique can be used to emphasize action with just as much style as it can character, but it can also be used to add a sense of action and urgency to an otherwise static moment.

For example, there’s not much action to this scene. Maria and Gabby are running, yeah, but what’s important here is Maria’s commands to Fitz, not any of the actual actions Maria and Gabby take. Lopes and Takara take a very anime-influenced route here, filling an otherwise static moment of Maria yelling with a flashy background that immediately grants the panel a more cinematic, exciting feeling. So, if a “lack” of backgrounds occasionally hurts All-New Wolverine 9, I think it far more often ends up benefitting the issue.

As for Logan’s cliffhanger reveal, Taylor, there are two ways I can see it playing out. Either Laura is shocked that this Logan has memories of her life with the “real” Logan, or Laura is shocked that there’s a timeline where Logan got to raise Laura like a real daughter. To be honest, while I know the broad strokes of Laura’s past, I don’t know enough specific details to be able to tell which one is more likely; what I do know is that this moment is the entire point of the last two issues. This story, in many ways, exists to bring Laura and Old Man Logan together.

Due to that, these last two issues have, at times, felt somewhat slight. That’s not to say they’re bad issues — on the contrary, they’re entertaining, charming reads. I appreciate that Taylor can successfully use his Wolverine in a wide variety of stories, not just gritty, hyper-violent ones, and the story here is just ludicrous enough to be terrifically fun.

Yet, the truth is that the best issues of All-New Wolverine have all had a strong emotional throughline — even the Squirrel Girl crossover was based around Laura and Gabby’s relationship. These past few issues have all been building up to that throughline with Logan, leaving them feeling a bit empty in the meantime. This hasn’t been a bad storyline by any means, but it hasn’t been All-New Wolverine at its best, either. Now that Logan and Laura have come face-to-face, though, I’m expecting that to change very fast.

Okay, now for one completely unrelated gripe: why is this issue billed as a Civil War II tie-in? Do we think Laura and Logan are going to play an important role in that story, or is this just a cheap crossover label slapped on the issue, “justified” by Carol and Tony’s brief guest appearances? If the latter, that’s such a rip-off — Carol and Tony don’t even fight! They get along perfectly! That’s not the “road to Civil War II,” it’s the road away from it!