Drew: Symbolism can be a potent tool for any artist, but its easy for a symbol to feel contrived, forcing the audience out of the work. We seek out and create meaning everywhere we look, so there’s no need for a writer to make those symbols too obvious. Curiously, Gatsby’s green light — perhaps the most famous symbol in all of American literature — is explained openly within the text. The reason we don’t reject this explanation as too on-the-nose is that it is Gatsby’s interpretation; that is, he recognizes and interprets the symbolic nature of the green light within his own life. In this way, Fitzgerald isn’t ignoring our ability to create meaning, but celebrating it by giving us a compatriot on the page. We’re looking for meaning, but so is Gatsby. Teenage Mutant Ninja Turtles 59 offers an almost opposite approach to its symbols, emphasizing intention over interpretation, distancing the audience from the text in less-than-flattering ways.

In particular, I want to focus on Kitsune’s painting. Tom Waltz’s script quickly sets to lampshading the obvious symbolism with a halfhearted feint from Kitsune:

“Oh, this obvious, potent symbol? Pay its obvious, potent meaning no mind.” It works fine as a piece of foreshadowing, and maybe even better as a character beat; Kitsune is either so confident in her plan, she has no fears of making her intentions obvious to Splinter, or she is so full of herself she thinks he wouldn’t understand the meaning of her incredibly on-the-nose symbols.

However, as the scene continues, Splinter and Kitsune return to the symbol of the phoenix, making it even clearer that Kitsune’s intention isn’t simply to rise from the ashes herself, but to literally resurrect Shredder. That these intentions are made so obvious to us, but somehow still evade Splinter is both frustrating and alienating. Splinter is serving as an audience analogue, viewing and commenting on the art on display, but he never betrays his interpretive skills. Indeed, the passage seems more concerned with Kitsune’s intentions as an artist than whatever conclusions Splinter might draw from them.

Obviously, things are a bit more complicated than I just laid out — Splinter’s line of questioning suggests that he is suspicious of Kitsune’s intentions, and his apparent passivity may be best interpreted as a counterfeint to Kitsune’s casualness. He might know exactly what Kitsune is up to, but is simply trying to play it cool. I’m happy to read the scene that way, though I still think it suffers from its focus on Kitsune’s intentions for the symbol — especially given how obvious they are.

By the issue’s end, Kitsune has made her play for Shredder-as-phoenix, attempting to steal his body from the Foot’s crypt. If Splinter’s conversation with Kitsune made him suspicious of her intentions, he certainly didn’t do anything about it. Sure, he has Jennika posted as sentry for the crypt, but he never sounds the alarms or even returns to the crypts after his conversation with Kitsune (at least, not until it was too late), all of which makes it seem like he wasn’t reading the painting in either the way Kitsune intended nor the way a reasonable reader of this series might.

But maybe I’m not giving enough credit to that cold open flash-forward. I know where virtually everything in this issue is eventually headed, so it’s easy for me to see Kitsune’s duplicitous intentions in that conversation with Splinter. I say “virtually everything” because the final moment, where Kitsune stabs Splinter, was decidedly not something I had anticipated. Even when I think I know what’s coming, this series can surprise me, so I may be wrong about Kitsune’s plan for Shredder, too.

Of course, that moment is greatly enhanced by David Wachter’s impeccable storytelling. 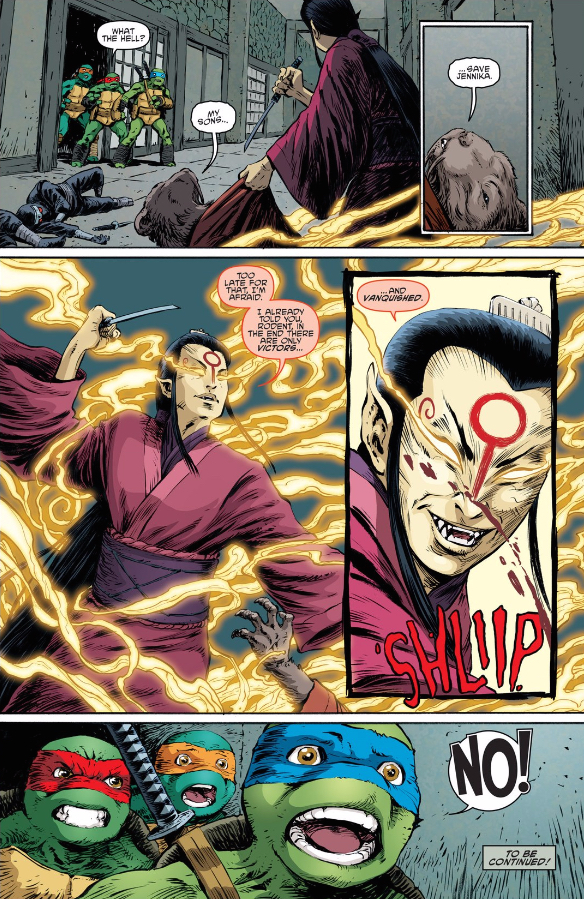 I love everything about this page. I love the three-tiered layouts with the inset panels, I love the way the first inset makes Splinter look pitiful, while the relatively larger second inset emphasizes the danger Kitsune represents. And I especially love the three different reactions on the turtles’ faces. Raph is angry, Mike is horrified, and Leo reflects his compassion. This series always uses its reverse-shots with intention, but this one in particular stands out for the quality of acting.

Ultimately, I think my troubles with this issue boil down to its role as a place-setter. I may have my issues with how it got us to a point where we understand Kitsune’s intentions, but I’m excited about the possibilities going forward. Will this mark the return of Shredder? Will it maybe also be the return of Splinter? I can’t wait to find out. Patrick, I’m curious to hear if you were as distracted by Kitsune’s phoenix talk as I was. Also, how about that Splinter fight scene?

Patrick: I think I was more interested by the phoenix talk than you were, if for no other reason than the other symbols that Kitsune has drawn (the fox and the dragon) are already characters represented in this story — herself and Shredder, respectively. Kitsune might be pretty boldly intimating that she intends the phoenix to also represent Shredder, but the issue closes on what very well could be a death of another character (who could well be resurrected) – Splinter.

Actually, wait: I’m getting ahead of myself. One thing that is clear here is that Splinter seemingly knows more about Oroku Saki’s body than he is telling us. Jennika asks why he would afford Shredder the honor of being entombed in a sarcophagus and displayed in Foot headquarters. While Splinter’s answer is rooted in the typical ninja-master honor-bound rhetoric, he makes a point to add: 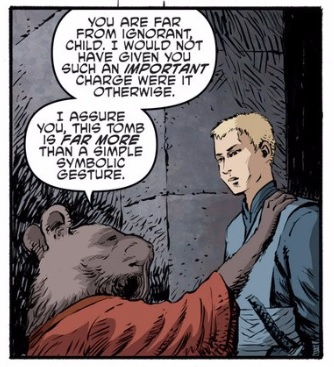 This suggests to me that there is something else that Splinter stands to gain by keeping Shredder’s body on-site. I am CONVINCED we don’t have all the information that Splinter does in this moment. But I’m also think this is Waltz fore-lampshading the obvious symbolism in the conversation between Splinter and Kitsune. It’s not that Splinter can’t interpret the foreboding “simple” symbol of the phoenix, but that he’s more interested in the subtleties of strength, honor and life that dance around those symbols.

This reading is further supported by the second half of Splinter and Kitsune’s meditative conversation. Splinter asks her about the on-going contest she has with her siblings, and Kitsune can only brag about how only the immortal creatures are truly capable of playing their game – everyone else is just being played. I suspect that Splinter considers himself to one who is actually capable of participating in the game in an active way, by understanding the motives and methods of these powerful, godlike beings. Wachter very cleverly suggests that Splinter’s secrets are his strength at the end of that scene by juxtaposing the panel’s access to the character’s face when he’s being warm and honest and the panel’s access to that same face when he’s being more mysterious. 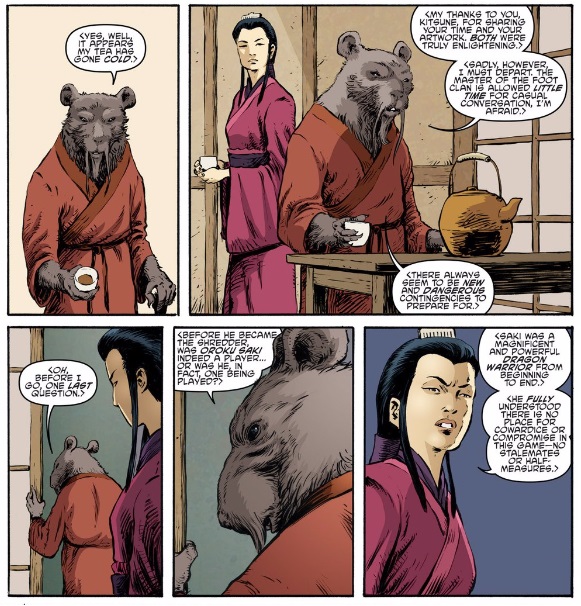 The question “was Oroku Saki indeed a player” is fascinating, and Kitsune grants him a characteristically cagey answer. However well she thinks she’s dodging the question, Kitsune does reveal her opinion that anyone other than her siblings is more or less powerless in the face of the great game. I believe that Splinter is confirming in this moment that Kitsune does not suspect him as capable of being a player in this game.

Which, of course, has me super psyched to discover what Splinter’s plan is in the issues to come. Is he heading into the afterlife to do battle with Saki’s soul? Y’know, like one soul is on its way in and the other is on its way out and they battle in the astral plane? Or maybe he predicts that Yoshi and Saki are eternally linked, and whenever one is resurrected, the other will be too? I’m obviously getting into some wild speculation at this point, but I think the text has done a fantastic job of giving us the tools to do so – and not even from a plot-mechanics level, but from a thematic one. And that’s fucking awesome.

Also, before we turn the conversation over to the comments, I wanted to highlight just how cool and scary that scene was when Kitsune projects herself into Alopex. Wachter and Waltz are careful to hold images of Alopex  until we absolutely need to see her – we don’t see her being too spacey to patrol, Angel just tells us about it. So, other than the obstructed view of her we get in the flashforward, the first time we see her is asleep in bed with Kitsune’s magical tendrils reaching out to her. I love this character — partially because she’s so adorable, which is exactly what Wachter is able to play up in the panels before the magic kicks in. 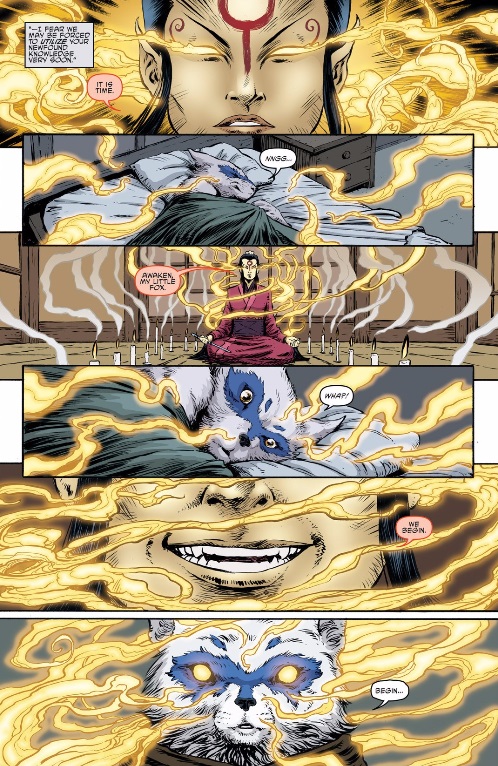 She’s so sleepy! But also, check out how cleverly Wachter players with the gutters two, four and six. Kitsune’s monstrous panels extend all the way to the end of the page, but poor, subservient Alopex obeys the law of the gutter… until that last panel. There are a lot of indicators as to what’s going on here — tendrils, yellow eyes, the matching dialogue — but the size of that final panel makes the overt subliminal. Not only does the reader know what’s happening, the reader believes it.