Mark: Who is Wonder Woman? What defines her?

Of DC’s key Trinity, Wonder Woman is the character most in need of a Rebirth. The New 52 Batman was able to essentially cruise along same as he ever was (which, of course he did – he’s Batman), and while some of us yearned for New 52 Superman to be more like his pre-Flashpoint counterpart there’s no argument either icon suffered as hard or as long at the hands of ineffectual creative decisions as Wonder Woman. This isn’t dismissing Brian Azzarello and Cliff Chiang’s run on the book, but Meredith and David Finch’s Wonder Woman was, frankly, awful – almost immediately and so poisoned the water that DC needed to dig a whole new well. Like so many New 52 books, Wonder Woman went out of this world with a sad, wet fart.

But DC’s struggles go far beyond creative missteps. You can see in Wonder Woman’s myriad of origin stories the difficulty DC has had grappling with Wonder Woman as a character. Fairly early in their lives both Batman and Superman’s mythos was locked into place. The death of Batman’s parents, the destruction of Krypton, these have come to be defining moments for these characters. They’re basically unchangable at this point. Compare that to Wonder Woman, who has had a handful of origins over the years and none of them definitive.

Continuing the meta-ness of the Rebirth initiative, Greg Rucka’s Wonder Woman: Rebirth 1 uses this melange of Wonder Womans to maybe build something new. Rucka and artist Matthew Clark go so far as to have Diana’s shattered mirror splinter into a million reflections of her past comic adventures. 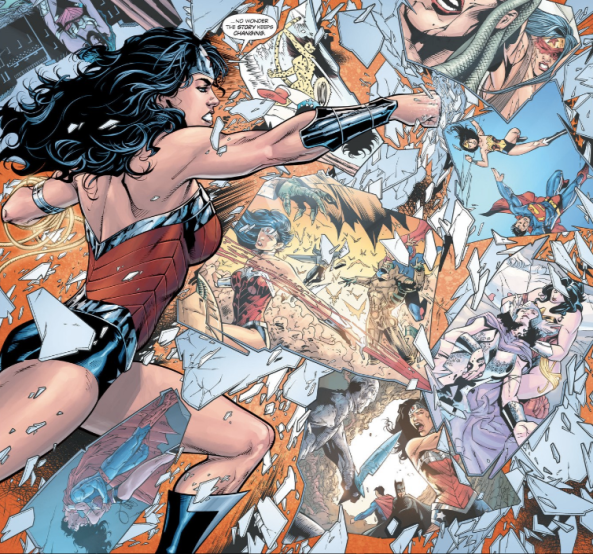 But like many Rebirth tie-ins, there’s little actual rebirth here and more subtle re-centering of the character with light teasing of what’s to come. But the issue does offer one central revelation: yes, Diana has been many things, but not everything she remembers (and, by extension, everything we’ve read) is true. Someone has lied to her. Which aspect of her past is false and by whom she is being deceived, Rucka leaves unanswered, prepared to tease it out over the first arc of his (double-shipping, of course!) new book.

And while all of this is potentially interesting, to me the most appealing part of Wonder Woman: Rebirth 1, and the reason I will be giving Wonder Woman a shot going forward, is the strength of Rucka’s writing. Wonder Woman has renewed prominence at DC thanks to her role in their movieverse, and if that’s what it takes to get her a little respect in the comic books then maybe Batman v Superman: Dawn of Justice was worth it. Maybe.

Taylor, it’s too early to say whether Rucka plans some sort of Crisis on Infinite Wonder Womans-style event that ends with a more singular, definitive version of the character, but is that something you would want? Or do you feel one of the strengths of her character is its ability to be reinvented?

Taylor: I’m not sure that I’m totally qualified to say whether one of Wonder Woman’s strengths is her ability to be reinvented. Aside from Azzarello and Chiang run on Wonder Woman, I’ve had very little exposure to her as a character aside from various team-up series. That being said, however, I think that Azzarello and Chiang’s take on Wonder Woman will soon become the version of her most fans remember. That particular run of Wonder Woman took Diana’s character to new and greater depths than ever before and the results were stupendous.

Given the success of that run, I’ve been wondering where Wonder Woman goes from here. Azzarello’s explicit use of gods from the Greek pantheon have always struck me as being at odds with the established DC universe. They rarely appear in other DC comics and would seem out of place in say a Batman comic. Further, Diana is technically a God at the conclusion of Azzarello’s story and while we easily accept superheros as having great powers, with the exception of Thor, deification is generally a cognitive line most authors and readers are unwilling to cross. Lastly, as Drew discussed at length previously, Diana became a powerful symbol for the feminist movement and inclusionism, which is something that is not easily duplicated. Considering all of this, it’s no wonder Wonder Woman the comic finds itself in a crisis. Diana’s unique character is different from the rest of the DC cast, so how do you write her in a way that feels genuine not only to DC, but to Diana herself?

When I consider all of this, I really appreciate this weird issue. Greg Rucka is asking all of the same questions I stated above and he wonderfully admits in his story that he has none of the answers. This thought is best expressed by Diana herself who notes that while the “wonder” in her name use to mean amazing, it now stands for a question.

It’s the question everyone is asking: who is Wonder Woman? What’s wonderful about this question is that it’s not only the characters in the comic itself asking the question. So is Rucka. Throughout the issue he reminds us, through Diana’s internal monologue, of all that Diana has been. Instead of shying away from her multiple origin stories, Rucka boldly presents all of them to us directly. He doesn’t tell us which is correct, if any, but just leaves it there for us, and Diana to question. This creates a wonderful event where I feel like everyone involved in this comic, both fictional and real, have no real answers to the question of just who Diana is.

This isn’t to say there aren’t hints about where this series might be going. After learning she’s been deceived Diana decides to retrace her steps in an attempt to find out who she really is. In doing so, she decides to make a stop at Olympus, but not before putting on a new costume.

We’ve seen the likes of this ancient Greece inspired costume before. However, I wonder if Diana’s tossing away of her old costume is more than just wanting to keep up appearances on Mt. Olympus. Could it be that we’ve just seen Diana where her Chiang-designed costume for the last time? When looking at her Mirror, did Diana come to the conclusion that that’s not who she is? It certainly would be a bold move to distance Wonder Woman, from a previous, successful run, but perhaps that’s what is needed. Living up to greatness is hard, but if Rucka really is distancing his take on Wonder Woman from Azzarello’s, it could ultimately be a good thing. In doing so, he would get the chance to tell his own story.

That still leaves the question of just who Diana is and what kind of comic Wonder Woman will become. Tellingly, when Diana arrives at Olympus, she meets no gods. There could easily be some simple explanation for that, but I can’t help but wonder if it means we will never see them again (or at least as long as Rucka is writing Wonder Woman). It’s hard to say, and honestly, I could see things going either way; regardless of where things go, I’m intrigued. By directly confronting Wonder Woman’s past, Rucka has prepared me to expect anything from her future. That alone will have me coming back to see what happens next.