Taylor: Towards the end of A New Hope, it seems like Han is going to abandon the rebels in their time of need, choosing instead to take his money and run. We all know how the rest of the movie plays out, but what we don’t know is how and why he endears himself to the rebels thereafter. By the time we see Han again in the Empire Strikes Back, he’s a general, and it’s clear he has both the admiration and trust of everyone in the rebellion. But how did this happen? How does Han go from a gallant rogue to a respected general? Why does he join the rebellion instead of paying off the price on his head? Issue one of the Han Solo miniseries has the answers.

Han is feeling lost. Ever since the defeat of the Death Star he hasn’t taken on a smuggling job which means he’s low on cash and low on rep. Seizing on the moment, Leia “summons” Han and asks to use his ship for a dangerous mission. Reluctantly, Han agrees, ostensibly for the the challenge of winning the Dragon Void run. However, the real reasons why Han agrees to this mission are less clear.

Aside from the the potential glory of winning the dangerous run, why does Han agree to the mission? That’s the main idea being kicked around in this issue and it hints at the overall theme for this miniseries. While there are no definite answers given here, there are some clues given. When Han first meets up with the Rebellion, he ruminates on this question himself.

He says “something” has changed in himself but he stops at saying what that something is. Given the prominence of Leia while he says this (she’s pictured in all four panels here) it’s clear that creators Marjorie Liu and Mark Brooks are giving us a major hint. It’s well known that, by Episode V, Han and Leia are somehow romantically entangled, and Liu seems to be suggesting the buds of this romance are what lure Han back to the Rebels. While this makes sense to me on some level, I also can’t help but feel like this simplifies Han’s motivations. Am I really to believe that Han didn’t join the Rebellion because of his apparent fondness for Luke? Or to find meaning in life beyond the next paycheck? Or even simply to escape the debt he owes Jabba? While I like the idea of Leia being part of Han’s motivations, it seems too simple and one-dimensional for her to be his only source. Anti-heroes like Han are complex characters and I think they need similarly complex motivations for their actions.

There are times elsewhere in the issue where other motives for Han’s actions can be gleaned. While he falls short of joining the Rebellion here, he does agree to undertake the Dragon Void mission. Before the race starts Han goes to a pre-race soiree where he meets a number of the pilots he’ll be flying against in the race. The scene itself is reminiscent of the famous Mos Eisley cantina scene from Episode IV. 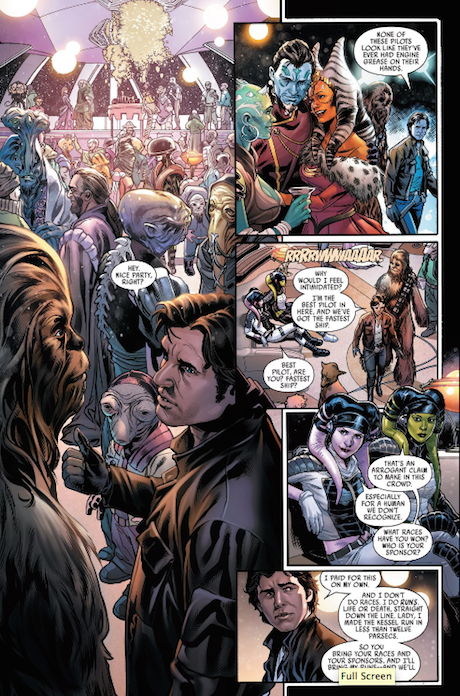 Strange aliens are talking, everyone’s drinking, and the depth of the Star Wars universe is on grand display. Essentially, Han is in his element here. He gets the chance to boast about his skill and he also gets the pleasure of finding himself the underdog in an impossible situation. When I consider this, another motivation for Han joining the begins to reveal itself. On this mission for the Rebels, Han is essentially allowed to be himself. He gets to socialize, pilot the falcon, and flirt with danger. Knowing Han, this is exactly the type of thing he would consider fun and it becomes little wonder why the mission, and thereby the rebellion would appeal to him. More than that, perhaps he’s recognizing his skills have an application beyond smuggling. Aside from being fun, Han might be seeing that he has a place in the galaxy where he actually belongs.

Drew, do you think Han has clear motivations outlined in this issue? In some ways I’m hopeful for a deep exploration of his character in this mini-series, but I still have my reservations. Regardless of that, I’m super excited for this Dragon Void run! We’ve all heard so much about the Kessel Run so I think it will be a blast reading about something similar. What are your thoughts?

Drew: I think you’re absolutely right that there are some fun ideas and moments in this issue, but I’m also finding myself distracted at the shallowness of Han’s motives. The idea that Han would come back at Leia’s request is a fun little piece of foreshadowing (as is the reveal that Leia herself nominated Han for the mission, against objections from other officers), but as you say, it’s a bit simplistic. His relationship with Leia is undoubtedly one of the reasons he might be convinced to come back, but it shouldn’t be presented as the only one.

The two bounty hunters (and later, Leia) hint at another, perhaps more pragmatic reason: he’s not really a smuggler anymore. Apparently now as afraid of the Empire as he is of Jabba’s bounty hunters, he hasn’t been comfortable taking any jobs for quite some time, enough so that he comments on running out of fuel and money. So, why wasn’t he already with the rebellion? They can keep him fuelled-up and fed, and have resources to spare when it comes from hiding from the Empire. Moreover, working with the rebellion means he doesn’t necessarily have to risk being caught just to make ends meet.

Of course, the very first mission they send him on is far riskier than any of the smuggling gigs he’s turned down. To me, that warrants extra justification for Han’s change-of-tune. In A New Hope, he seems to overcome his “I’m only in it for the money” attitude, but this issue starts with him back to his old ways. I can accept either of those outlooks as his new default, but then the switch between the two needs a bit more explanation — if nothing else, because it seems to so strongly parallel the same character development of A New Hope.

Maybe it’s those parallels that really get to me. Nostalgia is going to be a factor in any Star Wars narrative, but the best ones take us to a place or introduce a character or situation that we couldn’t have anticipated. There’s a reason “I am your father” is celebrated as one of the greatest moments in the Star Wars canon, while the use of the droids in the prequels, on the other hand, is panned for being repetitive and derivative. For this reason, the prospects of another Star Wars race didn’t excite me at all — the one in Phantom Menace was indulgent enough to poison that well permanently. Fortunately, Liu pulls out an unexpected twist basically as soon as the starting gun is fired, destroying several of the ships for reasons yet unknown.

The result puts Han in survival mode, which is a fun space to push him to. Han is at his most creative when he’s on the run in Empire Strikes Back, coming up with ever-more novel hiding places and escape plans. With several issues left, there’s plenty of space for those skills to come to the fore. That’s what I’ll be looking forward to, though explicating his motivations would be nice, too.