Michael: Wonder Woman was a unique entry of The New 52 and the same can be said of the Wonder Woman of DC Rebirth. After a “bad breakup” Greg Rucka returns to DC fueled by his passion for everyone’s favorite Amazon. In a lot of ways, Rucka is having his cake and eating it too.

One thing that makes Wonder Woman stand out among the other Rebirth titles is the way that it takes advantage of the bi-monthly release schedule. I highly doubt DC is gonna be able to maintain that rapid production schedule forever; quality comic book art takes time. Greg Rucka has kind of found a work-around for his artists: instead of having one story with inconsistent art styles he has decided to have two separate stories with two separate art teams that alternate issue by issue. Wonder Woman 1 focuses on the present day story “The Lies” drawn by Liam Sharp while Wonder Woman 2 is the origin story “Year One” drawn by Nicola Scott.

I like that DC is giving Rucka and co. the freedom to play by their Rebirth rules in this very different way. More so, I like that Greg Rucka seems to be just doing whatever the hell he wants here. Rucka has gone on record that he left DC because they promised him Wonder Woman Earth One but gave it to Grant Morrison instead. I don’t think it’s a stretch of the imagination to say that Rucka and Scott’s “Year One” stuff is built from the skeleton of Rucka’s Earth One plans. Like I said, the man gets to have his cake and eat it too.

Okay, enough meta-commentary. Wonder Woman 2 is evenly divided between the beginnings of Wonder Woman herself and Steve Trevor. And let’s face it, Steve Trevor could really use a little more characterization to make him, ya know… interesting.

If Wonder Woman 1 might’ve felt a little stiff to some readers, I’d say that Wonder Woman 2 definitely makes up for it. Rucka writes young Diana as a wide-eyed dreamer looking towards the horizon, rendered with emotion and confidence by artist Nicola Scott. Rucka isn’t trying to reinvent the wheel with this retelling of Wonder Woman’s origins but he’s definitely modernizing it in the sense of familiar female archetypes. Diana’s thirst for adventure beyond what she has been raised for makes me think of the more empowered Disney heroines like Mulan or Brave’s Merida. I suppose that familiar, relatable story model isn’t just reserved for female characters though. How many stories have we read about the curious young boy or girl who wants to explore the unknown and forge their own destiny? It’s a simple, yet powerful message that I think is easily approachable for new and old Wonder Woman readers alike.

I’m wanting this story to sell me on Steve Trevor; while this issue was a decent start I’m still not really convinced that there’s a whole lot to him. Wonder Woman 2 presents us with a Diana who is an individual – she reads like a three-dimensional character. From what I’ve gathered, Steve Trevor is typically defined by the people around him: Wonder Woman and in this issue his friend Nick. Make no mistake, being a stand-up guy and an amazing friend is a trait to treasure. But the focus should be on Steve, not Steve in Nick’s story. Steve is presented to us as the all-American living Ken doll with the one notable trait of feeling like something is missing. Then again maybe it’s okay that Steve is only defined by his relationship to Diana. Maybe Steve is just meant to be an uninteresting hunk that swoons over Diana. Maybe Steve Trevor is an intentional inversion of the classic “superhero’s girlfriend” role and that’s that.

Nicola Scott puts in some stellar work in Wonder Woman 2. Rucka does indeed write a compelling young Diana and Scott’s art really embodies the confidence and vulnerability therein. Quite often the best pages of a given comic book issue are the ones devoid of narration or dialogue – just silent storytelling told by the visuals of the artist. My favorite page of Wonder Woman 2 is where Diana discovers the mysterious tree that she’s never seen before. Diana gets bitten by a lurking snake – making my Catholic-raised mind race to allusions of Adam and Eve. Even before the reveal of the snake Scott gives us a twisted, lifeless tree that is ominous as all hell. Perhaps Themyscira is not the home that Diana thought it is; perhaps there’s something darker, hidden deep down? 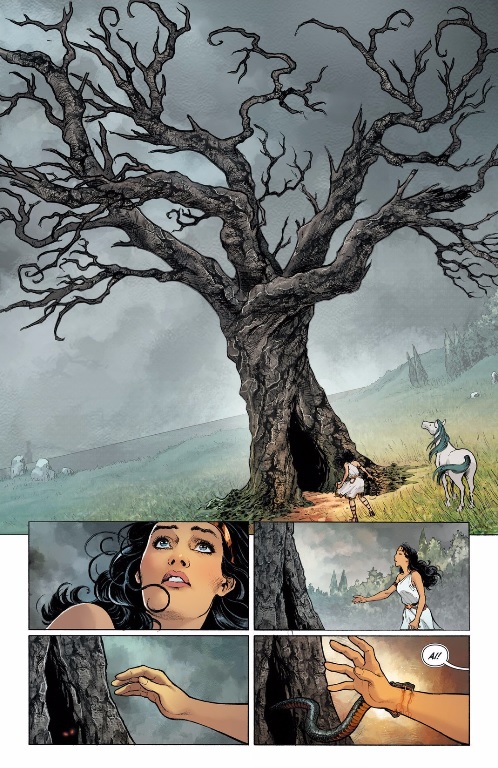 Taylor did you dig this issue? Am I just a Steve Trevor hater? Did you notice the different word bubbles and text used when the Amazons talked?

Taylor: Michael, I’m not sure if I like this issue as much as you did. A big reason for that is the way Steve Trevor is shoehorned into this story. Aside from being a wet fish, as you pointed out Michael, I think his presence and his story distract from the theme of the issue. Just what that theme is I really have no idea, because there really isn’t any continuity throughout this issue. Instead we’re presented with a series of vignettes showing us Diana’s life among the Amazons and Steve’s life in the army. Taken together, all of these little scenes show us what Diana and Steve are up to before their destined meeting at the end of this issue. While that’s all fine and good, nothing in the issue suggests that this will happen until the final couple of pages. In short, I didn’t detect any momentum or narrative arc in this story because it was too busy flashing between two worlds.

Rucka tries to propel the narrative of these two stories by juxtaposing them. In doing so, he’ll show Diana doing one thing, like going out with her friends to the theater followed by a scene of Steve doing something similar, such as going out to a bar. I appreciate how Rucka is trying to show the similar lives of Diana and Steve, but sometimes the juxtaposition is so strained it borders on the ridiculous. At one point Diana goes out “shooting” with her mom, which means they are going to the archery range. Comparatively, Steve and Nick go out to the shooting range and unload some rounds. This is a clever juxtaposition but Rucka belabors the similarity by forcing Diana and her Mom to call archery “shooting.” Now, I haven’t used and bow and arrow since I was in Boy Scouts, but I’m pretty sure no one calls that practice “shooting.” That the point seems so belabored in the story just to draw a comparison stilts the flow of the issue and instead of drawing similarities between these two characters, just makes me angry.

But not all is lost with this scene! Despite the scripting issues, Scott does a great job of drawing parallels (literally) between the two scenes in a much more subtle, and successful, way. In drawing each scene, there are a couple panels which are almost exactly the same, like these two showing the archery and shooting range.

Even though these panels don’t show up on the same page, they are so similar that it would be hard not to notice their similarity. The fact that they don’t appear right next to each other shows that Scott actually trusts the audience to make the connection between the similarities in these two scenes. Whereas Rucka’s script is occasionally clunky and too obvious, Scott’s art is subtle, sleek, and smart. If this issue had been written with the deftness of Scott’s artwork, it would have been much better.

For all that, some of the bigger ideas in the issue are nice. I’m intrigued by the young Diana we have been introduced to in this issue. In the New 52 era, I got the sense that Diana was older than she is presented as being here. As such, it’s interesting to watch her interact with her friends, teacher, and mother in a way that a teenager would. While Rucka missteps in other places, I think this decision is could pay huge dividends as it could become a major theme of this series. Indeed, it would seem Rucka is planting those seeds already. Diana’s life with the Amazon’s is basically one of bliss, with nary a trouble to be had. Basically, unless she leaves the island, life will continue to be perfect.

With the arrival of Steve, however, it seems this peace will be coming to an end shortly. Obviously Diana is going to get mixed-up in this somehow which will propel the narrative of the series as a whole. What’s neat about this is that it gives Rucka the chance to develop Diana from the ground up. Having her be young and new to the world will give him a chance to establish her in a completely new, and hopefully interesting, way. That he’s chosen to facilitate this with action in the story is promising and I can only hope it leads to a series that is more than the sum of this single issue.