Taylor: Recently, the Australian DJ group the Avalanches released their second album 16 years after their seminal debut Since I Left You. That this album, Wildflower, was ever released shocked the band’s fans as many expected a follow up never to come. That Wildflower has been well received by fans and critics alike comes as an even bigger surprise to me. Generally speaking, if it takes 16 years to come up new material, that’s not a good thing. Many are the bands who make one good album and then disappear into mediocrity for all time. What I’m hinting at here is that artistic consistency – well, quality consistency – is hard and it’s difficult to churn it out on a regular basis. In that respect, issue 60 of Teenage Mutant Ninja Turtles is a marvel because like the 59 issues that proceed it, it’s so remarkably good.

Kitsune has launched her long awaited attack against Splinter and the turtles. Using her mind controls powers, she quickly grabs the upper hand by turning Alopex and the Turtles against one another. Thanks to April and the spirit Aka’s help, the turtles eventually emerge victorious from their battle, but Kitsune gets away with her prize, Shredder’s body.

Throughout the issue there are nods to events that have occurred several issues before this. One instance comes when Kitsune tries to use her mind control powers on Leonardo. He however, has other ideas.

Leo is able to repel Kitsune’s powers because he has dealt with her brainwashing before, having previously been coerced into being Shredder’s Chunin. It’s a testament to the strong vision of the the TMNT writers, Kevin Eastman, Bobby Curnow, and Tom Waltz, that Leo’s is so easily folded into the plot of this issue. This type of character-building has become a hallmark of this series. While I can say I’m no longer surprised by how consistent the character work on TMNT  is, I’m still in awe at how well the writers consistently develop their characters over the course of several issues and how seamlessly this development is folded into individual monthlies. That Leo is the only turtle to evade Kitsune’s mind control helps to make him unique among his brothers and further shows that one of his primary character traits is resolve and leadership. This character work on Leo is the type of slow-burn character work that makes TMNT great.

April also makes some progress on her heroic journey in this issue as well. When all seems lost for the turtles she shows up with a magical feather and prayer, provided by the spirit Aka, to help defeat Kitsune. 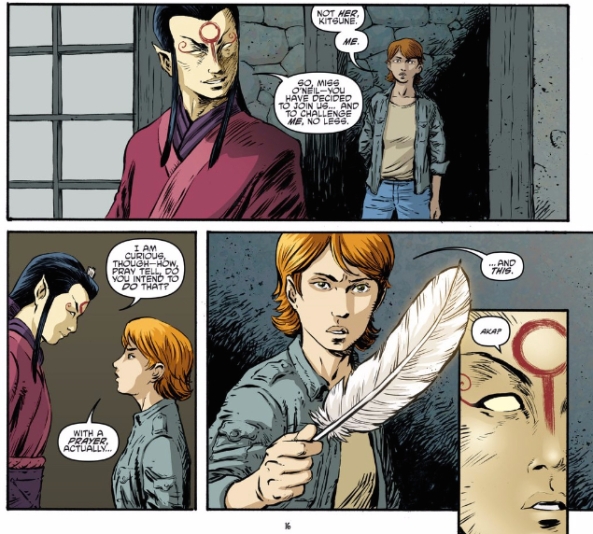 It’s great to finally see April step into the heroic role after nearly 60 issues of sitting on the sidelines. While I’ve always appreciated  the way April has been made a rounded character in this version of TMNT it has bothered me that the writers never allowed her to take center stage. Here she finally takes her place as an equal to the turtles by becoming the one to save the day. The only thing I don’t like about this turn is that April is only able to defeat Kitsune because she was given a special tool by someone else. I would rather she had discovered the feather and the prayer on her own, making her the true agent of her heroic deed. Still, it’s progress in a long process of seeing April become more than just the Turtle’s sidekick. Once again this development is the natural due to the wonderful development that proceeded this moment.

To talk about sustained artistic brilliance in TMNT and not mention the artistic team would be akin to sacrilege. David Wachter once again man’s the pencils in this issue and fares quite well. Drew and Patrick talked about his work quite well in last month’s write-up so I want to focus on the work of Ronda Pattison. Throughout all 60 issues of this series so far, Pattison has been the one artistic constant despite the numerous artists she’s collaborated with. At some point I think, like now, I think we all need to acknowledge just how consistently good her work on this series has been. Take the below panel for example

Nothing too flashy in this panel from a color perspective. But it’s the subtle things Pattison does that I really appreciate. Here, the turtles, April, and Splinter pop out from the background. This due in large part to the green of their skin or the maroon of their robes standing starkly apart from the grey, concrete background. This instantly lends the panel a clarity that makes it easy to read and visually satisfying with a nice balance of neutral and bright color tones. Pattison is also careful to give each turtle a slightly different  skin pigmentation. If you look at the left side of the panel you’ll see how Donnie and Mikey overlap a little. That their skin is slightly different, but still green, retains the their individuality while also continuing to unifying them. This has the added benefit of additionally helping to clarify where one character ends and another begins. Remarkably, this coloring, for all it’s distinctness, doesn’t seem as jarring as say a Chris Ware novel or an Adventure Time comic. While colors pop out here, they are muted enough to convey a sense of reality, rather than the intentionally candy-coated colors of those titles I just mentioned.

Patrick, again we have another solid effort from the TMNT crew. What are your thoughts on the continued brilliance once again displayed in this issue? Oh, and do you think it’s weird that Oroku Saki’s skull still had a full head of hair?

Patrick: You know, it’s a weird panel for a lot of reasons – there’s something about the way Splinter is holding that skull that makes me suspect he’s going to start practicing kissing with it.

It’s possible that the hair is a wig, right? Shredder’s like hundreds of years old and keeps being brought back to life, so it’s not outside the realm of possibility that his hair wouldn’t naturally stay to sleek and cool without a little help. Even as I’m making little jokes about Shredder’s toupee, I can’t help but point out some of the excellent visual storytelling going on in these last two panels. Check out the two opposite directions implied by these panels – the first, with the spike from Shredder’s helmet extending through the top of the panel, clearly points up; while the second, which extends down through the page’s gutter, clearly moves down (and to the right). In reading parlance, Kitsune is moving backwards and Splinter is moving forwards. Also, there’s a nice parallel construction of the space in these two panels: both emphasize the roundness of the space, using the Wachter’s inky shadows to tie the inside of the helmet to the inside of the tomb.

Taylor, I love your observations about both Leonardo and April’s characters, but I also wanted to follow that line of conversation a little bit further. Leo does emerge as a leader here, able to resist Kitsune’s mind control and rescue his brothers. We know the mechanics of why he’s able to do this, but it’s far more interesting to consider that some of what this series is — even 60 issues in — is an extended uber-origin story. Leo has suffered, and become stronger. That strength is what makes him a leader. I think roughly the same thing could be said about April. Yeah – it’s kind of a bummer that she rushes in with an Aka ex machina, but she’s also earned that connection to these supernatural creatures. I think Wachter and the writing team recognize just how tricky it is to convey that connection, so they set April and Aka’s meeting in the library, tying the discovery of the feather to research, thought and prayer. 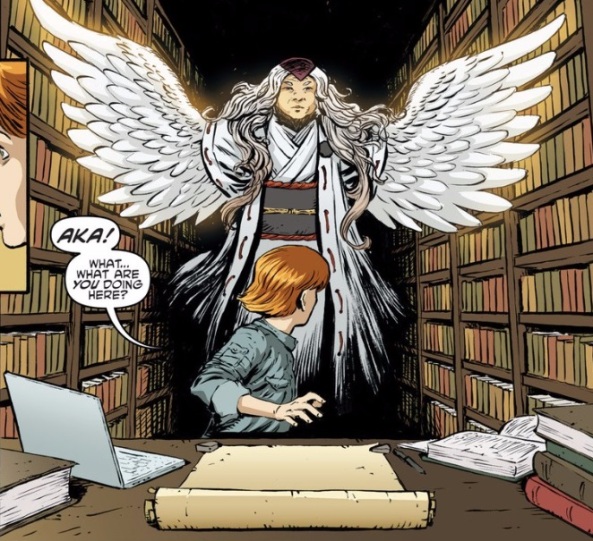 Aka’s basically an angel in this drawing: wings unfurled, all lines leading back to her, a divine glow from the heavens. It’s not just a faith thing, either. Aka’s wingspan goes from bookshelf to bookshelf, reinforcing the idea that April only gets this opportunity because she’s done so much research on the subject. Some of that research was going on an adventure in last year’s Casey & April mini-series, and some of it reaches back to 2013’s The Secret History of the Foot Clan. If the last five years of TMNT comics can trace the origin of Leonardo’s leadership skills, then they can also be tracking April’s expertise these… whatever you want to call Aka, Rat King and Kitsune.

Speaking of: it’s a little weird that Rat King is sitting this one out, right? Actually, come to think of it – there are a lot of dangling TMNT threads that we don’t check in on throughout this issue. Take a look back at any issue from the last 40 or so – they all cut away to some lingering question or tease some future development. That’s one of the ways this series has remained to propulsive for so long. But there’s a finality to this issue that’s almost unnerving. Kitsune tried to revive Shredder and failed, her power-play is spent and Splinter retains control of the Foot Clan. The issue is even wrapped up in it’s own neat little bow, starting with a story about Kitsune burning down a hunter’s house, and ending with her failure to destroy Splinter’s home. Wachter even uses some of the same imagery in reverse to bookend these stories a little bit more:

So what’s that mean? The TMNT series is about to branch off into two separate series. The vanilla series looks like it’s continuing with Wachter and picking up the Street Phantoms story from a few issue’s back, and the TMNT Universe series looks like it’ll be a fun grab-bag of stories from Paul Allor, Damian Couceiro, and Kevin Eastman – so, y’know, sign me the fuck up. But even with all that external promise of future-goodness, this story is surprisingly focused and insulated. That’s what I’ve always loved about IDW’s approach to this series: for as much care and attention the over-arching mythology gets, it’s the individual moments that matter most.