Patrick: It’s hard to think of a creator at DC comics that has had a more lasting, meaningful, and marketable impression on a character in the last five years than writer Scott Snyder. His run with Greg Capullo on Batman (coupled with his role running the rooms for both Batman Eternal and Batman and Robin Eternal) makes Snyder the mental and emotional authority on Gotham’s Dark Knight. Bruce Wayne may be the “Batman” in the title, but Snyder himself is the “All-Star.” The first issue moves with such breathless confidence, willfully tossing out repulsive imagery, C-tier villains, and disorienting chronology with such abandon, it’s like the blockbuster creative team is daring us to stay away. But for every “22 minutes earlier,” for every appearance of Firefly, for every horrifying account of people subtly slashed to death, All-Star Batman 1 is an amazingly good time. It’s a remarkable change from Batman, which while obviously excellent, often wasn’t “a good time.” But it’s like Batman reiterates a couple times in this issue: “I’m trying something new.”

We get that line in both of the discrete stories in this one. In the first story, drawn by inimitable John Romita Jr., Batman tells Gordon that Duke won’t be acting as his “Robin” but as “something new […] something better, I hope.” And in the back-up story, Batman explains his “Cursed Wheel” training program to Duke, introducing it by saying “I’m trying something different.” Clearly “trying something” is on the top of Snyder’s mind, and that sense of novelty is all over this issue.

And we can see that focus on “something different” right from the beginning of the issue, which takes place well outside of Gotham City.

Right from the jump, Snyder’s removing Batman from the city he’s developed such a fascinating relationship with. Auggie Mac’s Diner (which I feel like has to be an anagram for something, right?) is about as far removed from the grit and corruption of Gotham City, and colorist Dean White seems happy to remind us of this. That first panel appears in black and white, making the second panel pop with the warm colors of the sun rising on the open road. It’s a romantic image, quaint and cliché in its own way, but decidedly not tapping the visual vocabulary of Batman.

And then, of course, costumed villains fly in and start pummeling Batman. Snyder’s choice of villains here is telling. I called them C-Tier villains above, but that might be generous. The first two we see are Killer Moth and Firefly, and they are quickly followed by Black Spider, a villain so obscure, I had to look him up. I love the running insect theme, even if it doesn’t pay off it any specific way. It feels like the creative team is skimming through volumes of Batman lore and digging up funny little patterns (more on that in a bit). Batman’s got three insect-themed villains that are basically dudes-in-suits — that’s interesting, even kinda funny, but shy of the kind of insightful observation we expect from a Scott Snyder story.

But fear not, that stunning insight is somewhere in the periphery of this issue. Forgive me a second while I bop back and forth between this story and the stunningly beautiful backup drawn by Declan Shalvey and colored by Jordie Bellaire. During the investigative part of this story, Batman and Duke are in some kind of fabric store, so their backgrounds are inherently and necessarily beautiful, bold and colorful. 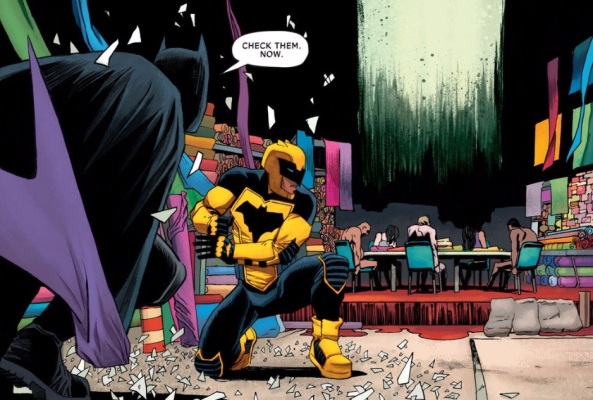 The ceiling is still an amorphous dark shape, so we’re not totally free of Batman’s signature darkness, but the squares of individual color jump out against this drab background. Jumping ahead to the actual “Cursed Wheel,” which seems to be a graphical representation of the total life experience necessary to be a Gotham City hero, color also plays a meaningful — albeit not totally clear — role. Batman identifies Dick as blue, Damian as green, Barbara as purple, and Shalvey and Bellaire dutifully present panels focusing on each of those colors in turn, stealthily transitioning back to the scene in the fabric store.

That’s a neat trick, if ultimately kind of an obtuse way to explore the concept of this Cursed Wheel. But I find the concept much more fascinating when contrasted with Two-Face’s villainous ramblings in the previous story. He’s out to prove something about Batman (because that’s what Gotham villains do), and he puts a bounty on Batman’s head, effectively turning everyone against their favorite hero. But in explaining his actions to Batman, Two-Face expresses Batman’s optimism about people by calling them “sparkling rainbows,” even going so far as to bring up Bruce’s sidekicks as examples. Two-Face claims not to see them that way:

It might take a few issues to suss out what exactly colors mean to Batman, but I think it’s already clear what colors — and having fun and trying something different — means to All-Star Batman.

Michael, did you enjoy this issue? For all of my ramblings, I didn’t really touch on the implied acid rain story or the hilarious rural sculpture garden Batman fights Black Spider in. Plus, there’s a backstabbing butler and an invisible man? Jesus, there’s a lot going on in this issue!

Michael: Boy oh boy did I enjoy this issue Patrick. I was excited about All-Star Batman from the minute the series was announced for the very reason you discussed: I knew it was going to be something drastically different from what we were used to.

I wouldn’t call Scott Snyder’s Batman run formulaic, necessarily. There were plenty of surprises and innovations in those 51 issues, but there was also a certain Snyder pattern at play. Reading All-Star Batman 1 it’s clear that Scott Snyder is trying to break that mold here from the get-go. Instead of an intro with a slow build and internal Bat-monologue, Snyder and John Romita Jr. jump headfirst into “My Own Worst Enemy.”

I think “Zero Year” was a reawakening for Snyder that lead us all to the Batman road warrior adventure before us. I know it goes against “the rules,” but goddammit do I love a “Batman in daylight” story. And I love a Batman that flashes a smile every now and then too. Guess what? Both of these things are in this comic! You can feel the energy present from the moment Batman crashes through that diner window. Romita frames the introductions of Batman and his pursuers with these attention-grabbing title cards reminiscent of a Western movie. My only complaint of those is that our main scoundrel Two-Face didn’t get one; perhaps because he was introduced in a flashback and not on the chase.

Speaking of which, I really enjoyed how Snyder used a brief series of flashbacks to show us how Batman and Two-Face started on their road trip in the first place. Gotham City is a place that suffers one attack after the other; this time it was Two-Face unleashing acid rain on the city – which is very character appropriate. I don’t need to see Two-Face launch his attack on the city; I don’t even need to know how it works. All we need to know is that it happened and that sets the stage for the mission that Batman embarks on.

Snyder leaves the relationship between Two-Face and Batman a little vague, perhaps intentionally. Harvey’s message to take him to “the house up north” is addressed to Bruce, not Batman. Does Two-Face still know Batman’s secret identity as he did way back in Batman and Robin? Snyder’s said that he will address Two-Face’s apparent suicide in that particular arc in All-Star Batman 2, so maybe we’ll clear up exactly what Harvey knows. Since he’s being posed as this secret keeper/spiller, I’m thinking that he does know the Batman/Bruce connection. That being said, this trip would be a hell of a lot easier if Bruce went out of costume or as Matches Malone, with Two-Face chained up in the trunk. But that wouldn’t really be that much of a fun story, would it? Also, what’s up with Two-Face’s mask? I get that it helps prompt that color-blind speech but still – why would Batman put a mask on his head that only leads him see out of his bad eye? I’m asking the questions they don’t want you to ask, you guys!

I can be pretty critical of John Romita Jr’s artwork, but I must say that he’s killing it in this issue – he’s far better suited for drawing Batman than Superman. Here he gets the opportunity to use two of Batman’s most powerful weapons: his fighting skills and his utter intimidation. After he makes quick work of Black Spider, Batman simply has to give Firefly a mean look and he runs away with his tail between his legs. Batman and Romita make excellent use of his surroundings here, taking advantage of the aforementioned rural sculpture garden and using the wheat fields to be a lurking shark that pounces at Two-Face from below. This was heavily promoted in the solicitations, but I still love the imposing image of Batman marching through the stalks of wheat, leaves and cape blowing in the wind.

Scott Snyder could do whatever he wants to do with Batman at this point in his career, which is an amazing gift for all of us to behold. In his first issue of All-Star Batman he gets to write a villain he has yet to work on thus far, give Batman a chainsaw and makes ‘ol Alfred somewhat of a traitor – Snyder loves fucking with Alf, y’all. Though I said that this was a chance for Snyder to “break his mold,” it still is a Batman comic written by Scott Snyder. Case in point: as Batman is fighting Killer Moth, he schools him on moth trivia, stabs him in the hand and tells him to “shut up and die.” Rock on, Batman.