Michael: Comic book fans are extremely protective over their favorite superheroes, a fact that has probably been exacerbated by the internet. We debate on Batman’s actions as if he were a living, breathing person because he’s important to us. It’s the same way of asking the question “What’s the best Batman story of all time?” Art is subjective and comic books are no different. We may agree on many of the same things, but my Batman is different from your Batman. It’s why stories continue to roll out 75+ years after his creation.

Batman 6 serves as an epilogue to Tom King and David Finch’s first arc “I am Gotham,” which ended with Gotham Girl reluctantly fighting and killing her gone-crazy brother Gotham. I like my superheroes to be heightened metaphors of everyday humans and I think Tom King does as well. Often times when someone loses a loved one, they talk about the importance of “keeping busy” and not focusing on the hole in their lives. How does a superhero keep busy in light of the death of her brother and crime-fighting partner? She continues on superheroing, all the while talking to the ghost of her fallen brother Hank.

You can feel the breath of fresh Rebirth air in Batman 6 with the rogues’ gallery it uses. Ivan Reis steps in for the epilogue and gets the pleasure of drawing some of the more colorful villains of Batman’s history: Colonel Blimp, Kite Man, and the pirate Captain Stingaree. Besides Kite Man I hadn’t actually heard of any of these guys, and I’m always delighted to learn more of the goofy elements of Batman’s canon. Also, any Bat book that utilizes the dirigibles so closely associated with Batman: The Animated Series gets a thumbs up from this guy – I love the blimps!

To my knowledge Ivan Reis hasn’t ever drawn a Batman book in proper, but his renderings of the Dark Knight featured in other titles have always been a favorite of mine. Reis’ Batman in Batman 6 was 50/50 for me this time around. When Batman confronts Gotham Girl he is given the classic epic reveal: he appears from nowhere, positioned above Gotham Girl as if he’s a gargoyle that’s always been there – A+. Subsequent drawings of Batman make him look a little stocky and lumpy – more reminiscent of Frank Miller’s Dark Knight than the typical modern athletic Batman.

One unique visual aesthetic throughout the issue is how Reis’ pencils and Marcelo Maiolo’s colors fade off into the gutters; leaving trace remains of Joe Prado, Oclair Albert, and Scott Hana’s inks. On the meta-level it’s as if Gotham Girl’s superhuman abilities have an obliterating effect on the “powerless” city of Gotham. In-story, however, it allows the non-essential elements of the scene to fade away as we zero-in on the raw emotion that Claire feels over the loss of her brother. This is especially prevalent after Bruce reveals his identity to Claire and she breaks down and cries for the first time. It’s the visual highlight of the issue that perfectly underlines what King wants us to feel for this character.

There’s some excellent comic book staging in Batman 6 that really pushes you to feel the emotional trauma that Claire has gone through here but it still feels a little off to me. Throughout the course of “I am Gotham” I have never really trusted Gotham or Gotham Girl; more importantly, I don’t believe that Batman would. I know that introducing new characters into long-running series is difficult and that the “Batman is an untrusting asshole” notion is a little tired, but this identity reveal doesn’t feel earned to me. After this and revealing his identity to Kate Kane in Detective Comics we’re reaching Batman movie levels of unmasking.

Similarly, I’m not a fan of The World’s Greatest Detective acting clueless as to how to console a young girl who has lost her brother. Batman doesn’t necessarily have to have all of the answers – that makes for an uninteresting story – but the subject of deaths in the family is something that Batman is 100% an expert in. Since King has been building on the Alfred/Bruce dynamic, Bruce asking him for advice on helping the grieving Gotham Girl makes a bit of sense – it’s a good relationship build. But this is not Batman’s first death rodeo, or even his second or third for that matter (My submission for the next Bat book is Batman: Death Rodeo). What I’m getting at is that Batman’s behavior in this issue is not emotionally true to what I believe about Batman. I’m not writing Batman of course, so that point may be moot.

What up Spencer? Am I being too harsh on the Gotham Girl/Batman dynamic? I gotta say that I wish we could skip “Night of the Monster Men” and jump right into the Suicide Squad stuff, how about you? Any Duke thoughts? He’s more of a All-Star Batman character, so he seems to be relegated to monitor duty in the Batman title itself.

Spencer: The handling of Duke Thomas is interesting all-around, what with I Am Robin taking primary custody of the character from creator Scott Snyder, who obviously had plans for him, from the get go. At the moment, I’d probably say that King and Snyder are splitting stewardship of Duke 50/50. Snyder’s developing his heroic chops and identity, but King clearly wants to do more for him emotionally, setting him up as an important figure in Gotham Girl’s life.

As for the Batman/GG dynamic, I agree with some of what you said, Michael, but not all. Alfred would indeed be the first person Bruce would approach to ask this kind of advice, but Bruce has also helped others deal with death before — Dick Grayson, most prominently — and shouldn’t be this adrift handling it. That’s probably the one note in this issue that rang false to me, but the rest makes a lot of sense, including Bruce’s big identity reveal.

After all, Batman certainly didn’t instantly trust Hank and Claire — he vetted them thoroughly before bringing them into his operation on a probationary level. Bruce ultimately opens up to Claire, though, because he sees himself reflected in her. After their first encounter Bruce realizes that he can’t reach her simply by offering help, and instead appeals to her sense of duty. Notice that Batman doesn’t reveal his identity until after she answers his question about why she helps Gotham. 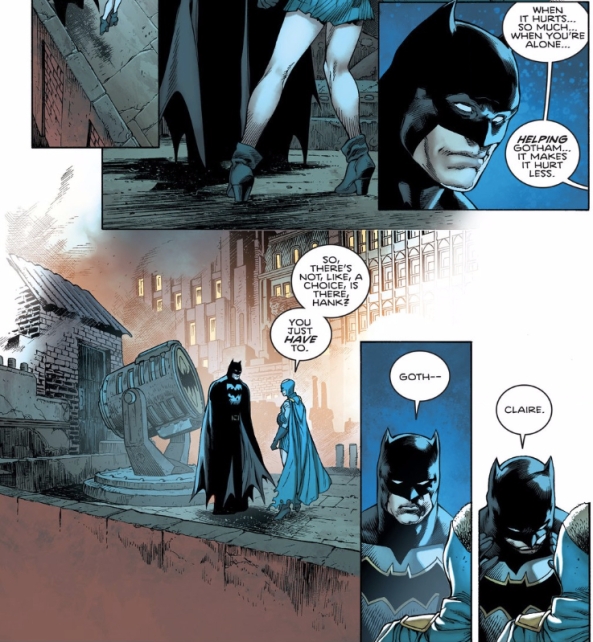 “Helping Gotham…it makes it hurt less.” “There’s not…a choice…You just have to.” Can’t you hear those explanations coming from Bruce’s mouth just as easily as Claire’s? In many ways, Bruce taking Claire under his wing here isn’t much different from what he’s done with Dick or Jason or even Duke — he sees in Claire a kindred soul, one who can only get peace from helping Gotham and her people, and he’s going to make sure she can do just that without being as alone as he once was. She’s essentially getting deputized as a Robin here, only one with super powers.

I still don’t know if I really know who Gotham Girl is, but that may be the point. As both a character and a person within Batman‘s universe, she’s been solely defined by her relationship with her family up to this point. Without them, all she has left is these newfound abilities, and Batman’s taken it upon himself to make sure that Claire directs them in a (relatively) safe way. Maybe he did open up to her somewhat quickly — though he first revealed his identity to Hal Jordan much sooner and far more hastily — but I think King’s established enough procedural and emotional motivation for Bruce to do so.

Michael, like you I too was rather pleased with Reis’ work on Batman 6. It’s not perfect — Duke’s face especially feels off — but Reis does impressive work bringing out Gotham Girl’s emotions, which is ultimately the point of this issue anyway.

I love how playful she is here — Reis is providing Claire with personality in a way that the dialogue doesn’t. His work is just as effective when it comes to depicting her pain and grief, as Michael pointed out. This is all especially impressive when you consider that Gotham Girl’s mask obscures her eyes behind white lenses — a poor design choice at this point in her development, as it obscures her emotions in an issue meant to highlight them, but Reis never lets that fact slow him down.

Reis’ layout work is certainly noteworthy as well. Let’s go back to that last image I posted and consider the entire page.

The use of long vertical panels here is a perfect way to depict the distance Colonel Blimp falls, and even though each panel approaches Blimp’s drop from a different angle, the fact that he moves a little further down on the page in each panel continues to steadily depict his fall regardless. There’s a fun bit of symmetry here too, as Blimp breaks through the borders when he’s first dropped and then later again once he’s finally been caught. Letterer Deron Bennett even gets a chance to show off, having dialogue balloons from one panel overlap into the previous, directing the reader’s eye in the proper direction without ever disrupting the flow of the layout or obscuring any of the art, even when the unique layout might have made it difficult to do so.

This issue’s standout visual moment, though, may just be Kite Man’s attack.

The decision to have the camera follow Kite Man at a fixed distance even as he dives through this apartment is such a dynamic, unconventional choice, and one that pays rich dividends.

Michael touched on this a bit as well, but I just want to reiterate how smart King’s choice of villains are in Batman 6. Spending some time with these Z-Listers reaffirms that Gotham is truly a city in need of help, a city constantly under attack. Kite Man is obviously a blast, and I want to see more of him pronto, but Captain Stingaree may actually be the highlight; his shtick makes him equal parts humorous, sympathetic, and dangerous, and that’s a really satisfying combination.

I don’t know if this is intentional or not on King’s part, or even noticed by any of the characters within the narrative, but Stingaree also creates an interesting parallel to Gotham Girl. Gotham Girl essentially killed her brother while still reeling from Psycho Pirate’s mental manipulation, and Stingaree likewise attempts to kill his brothers while suffering from his own mental illness. Could the fact that Claire can save Stingaree’s brothers when she couldn’t save her own be a bit of redemption for her, or would it instead serve as just another reminder that she couldn’t save Hank?

Michael, I’m sure “Night of the Monster Men” will be a lot of fun, but the crossover comes just as both Nightwing and Batman are starting to really pick up steam and pique my interest. I’m eager to follow Batman to Santa Prisca despite being a little lukewarm on this run up until this point — I’d say that alone makes Batman 6 a successful issue.