Spencer: The third arc of Jeff Lemire and Dustin Nguyen’s Descender is called “Singularities,” and it’s an appropriate title. The progression of the narrative has slowed to a crawl as, instead, each issue gets drawn into the orbit of a single character, exploring the way the ten years since the Harvesters’ attack have shaped them into the person they are today. Issue 15 focuses on Effie (a.k.a. Queen Between), the ex-wife of Tim-21’s former owner, Andy Tavers. Not only do Lemire and Nguyen deftly flesh out the past of a character who, up until now, had been a bit player, but they pack a heartbreakingly comprehensive look at a ten-year-long relationship into a scant 23 pages.

In a way, this issue fills in the blank’s in Andy’s backstory as well, showing how he went from Tim-21’s “brother” to a ruthless robot scrapper. Effie plays an integral role in his journey, befriending Andy as soon as he arrives on Niyrata, supporting him when he decides to leave, but then growing apart when their views of the anti-robot culls become irreconcilable. It’s a complex journey: Effie goes from Andy’s best friend to his girlfriend to his wife to his ex, from someone who supported his scrapping career to someone who sympathizes with the robots to someone who actively fights for their rights to someone who considers herself part-robot. Time changes us all, and what’s heartbreaking isn’t the fact that these characters have grown, but that they’ve both become exactly what the other hates.

It’s significant that this is the moment Effie chooses to leave Andy. While it’s implied that she doesn’t start viewing herself as part of the “Between” until after losing her arm, there’s clearly a part of her that’s already empathizing with the robots’ plight. This is Andy emphatically denouncing what would come to be a vital part of Effie’s identity; of course she’d leave. How could she stay?

Effie’s discovery that she identifies as part of the Between is also something that Lemire and Nguyen dole out subtly and economically. Like her and Andy’s relationship, it plays out in stages. As a child Effie has an affinity for tech, but doesn’t seem to care about robots all that much one way or another. When she and Andy are scrapping partners, she’s grown sympathetic to the robots, but not fully — she sees a huge difference between destroying the terroristic Hardwire and destroying simple breeding robots. Just a year later, though, she’s protesting the destruction of any robot, calling it murder. Once she’s received a cybernetic arm, things seem to finally click for her.

By transitioning between two time periods with an identical shot, Nguyen and Lemire show that this moment directly leads to Effie’s becoming Queen Between.

This is a technique the creative team has used quite often throughout Descender‘s run, often to show how their characters and world have changed over time. This month, the most significant example comes from the two splash-pages of Andy and Effie embracing.

The first comes six years before the present-day, when Andy and Effie are fourteen, young and in love. This is very much a classic romantic moment: Nguyen fills the background with soft colors and even incorporates a breeze, blowing their hair and clothes. It’s immediately recognizable what’s going on even if you know nothing of these characters or their relationships.

Notice how things have changed by the second image, though. 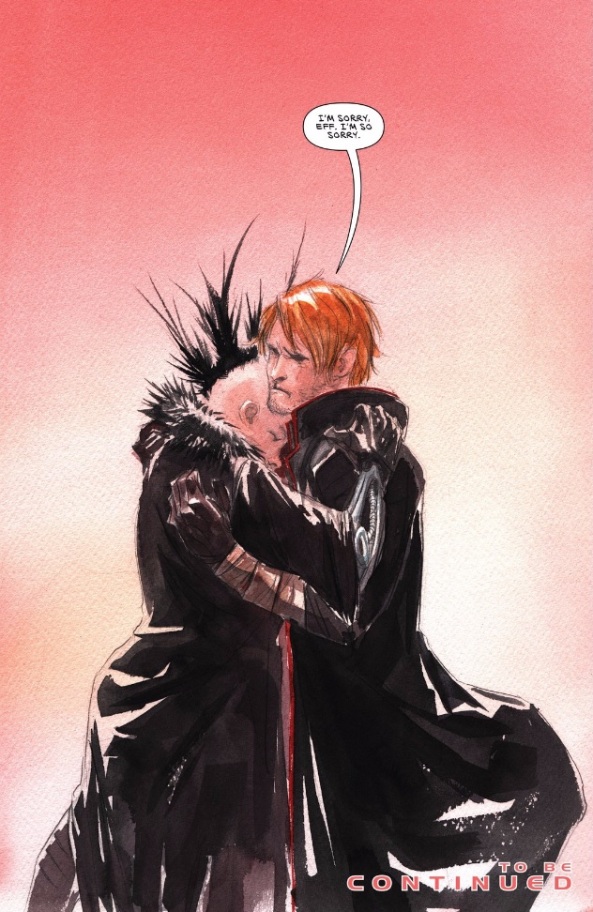 The set-up is identical, but the details differ greatly. This time the background is a harsh red, emphasizing the death and violence Queen Between has just witnessed. This time there’s no kiss, no romance; Andy is comforting Between, not in love with her. It’s clear how much things have changed between them, but the fact that Nguyen and Lemire use an identical layout here also reminds us that not everything had changed. Despite what they’ve become, Andy still cares about Between, and she’s still comforted by his presence in a difficult time.

Despite the death of the Between, it’s this embrace that enables the creative team to end Descender 15 on a hopeful note. Andy and Queen Between should by all rights despise each other, but they don’t. Maybe it means Andy and Between can find a way to be, if not lovers, at least friends again? Maybe it means that Andy’s eventual reunion with Tim-21 will have a happy ending? Maybe it even means that the UGC and the Hardwire will similarly find a way to come together, perhaps united against the threat of the Harvesters? It seems unlikely, but hey, there’s always hope.

While this arc has been a bit of a departure from Descender‘s usual modus operandi, its stories are as powerful as ever, and it still delivers the breathtaking art and exciting world building that Descender‘s come to be known for. Ryan, my favorite detail this month in that respect has got to be the Knossian Giants — the image of them literally carrying humans on a plate like they’re hors d’oeuvres really gave me a kick. Where there any details you particularly loved? What’s your take on Andy and Effie’s relationship? Is there anything about Nguyen’s art you’d like to highlight?

Ryan D: Oh, Spencer, there is not an issue which goes by that doesn’t contain a morsel of brilliance from Nguyen. Though you already showcased the two big heart-punches of the issue, something really struck me about the art during the moment when Andy tells Ellie that he plans to run away from the orphanage:

With all of the sci-fi comics and novels (Player of Games by Iain M. Banks is well-recommended) I’ve been reading lately, my eye is getting very keen on how worlds are being built by an author or creative team. In this case here, the planet on which the two characters are situated does not contain any particular plot significance, but is still imbued with a particular, believable feel which does not distract from the story being told. I applaud Nguyen for his choice here to render the location with enough detail to be distinct and thought-out without needing a gimmick, a convention seen in many space romps like Empress, wherein every environment needs some grandiose feature for it to have identity, i.e. “the planet made of gold” or “the planet populated with monsters!”

It may have been in reading articles written by our man Drew that first made me recognize the idea that, when creating a new universe, every detail added either expands this universe or limits it in some way. Descender, as a rule, over time, has kept clarifying its galaxy, teaching the audience its rules, showing the wheels within wheels which make it tick all without taking away from the sense of wonder and discovery every time something is revealed; it is a universe rife with narrative potential, and I confess that I was worried that these “spotlight” issues of this arc would deminish this. I should have had more faith in Lemire — one of the best writers of character voices in the business, in my opinion, who always finds the most interesting choices to challenge his protagonists — and Nguyen, whose penile and water-color style lets him show equal parts detail and scope.

This story of two star-crossed lovers proved potent to me, as it proved brave enough to tell us a tale to which the audience already knew the ending, in the same way that one knows the outcome of Romeo and Juliet from the opening prologue, or that the boat sinks in Titanic. And this story is one we’ve seen before; the treat, however, is seeing it play out in this universe.

One of the small details which made perfect sense to me is seen in the opening two pages. The aid workers helping Andy here provide a very telling peek at how different planets dealt with refugees from areas effected by the Harvesters’ devastation: 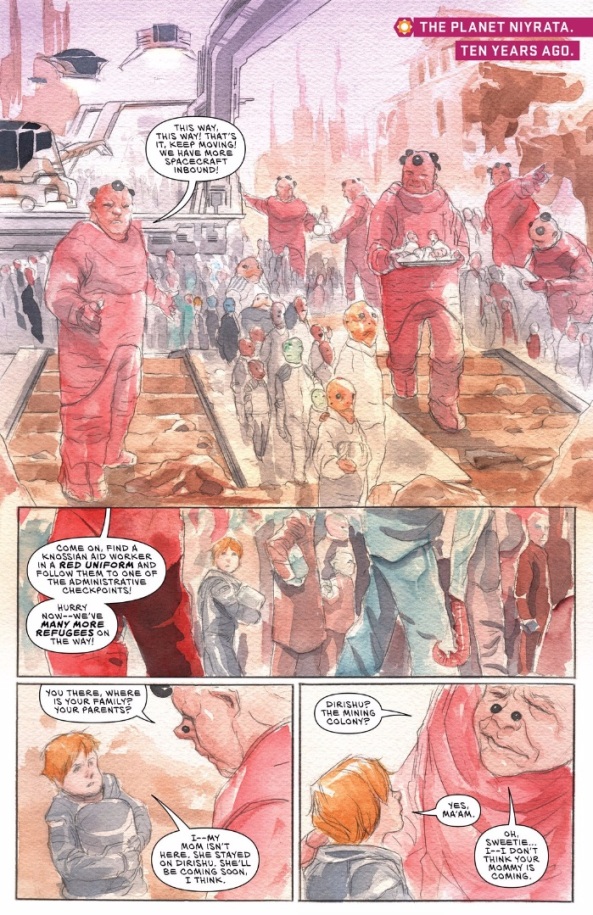 Refugees have proved a huge political talking point as of late and rightly persist as a relevant issue in our timeline, and it always interests me when an audience gets to see how a sci-fi universe deals with a very contemporary problem — especially when their solutions to such complex situations show that there might not be more elegant ones in any imagined world. I find the very idea to be humbling.

Moving from here, having Effie/Queen Between as a potential member of Andy’s crew offers an incredible amount of narrative potential. Aside from the obvious idea of the relationship between the Queen and Andy rekindling, or her robot ethics rubbing off on Andy to make it possible for him to relate once again to Tim-21, there are plenty of characters whose dynamics would be fascinating to see with Effie. One interaction which I am very keen to witness it that of Queen Between and Captain Telsa — two badass characters who refuse to suffer fools, stand firm behind their own ideologies, and sport really cool hair styles which Nguyen always draws with flair. Now, after shredding my heart to little bits, all I can ask is that Lemire returns us to Tim-21 next month to see how our favorite companion bot is doing. I’m worried about him.