Taylor: Darth Vader stands alone in pop culture. He is at once terrifying and relatable, a killer and a loving father, a villain and a hero. Perhaps the reason for his enduring popularity is that Vader cannot be defined by one singular trait. Like every human, he changes over time, is sometime good and sometimes evil, and is all too fallible. Ultimately this is what makes him a character that is uniquely memorable. Despite controlling an ancient mystical power, using a sword made of pure energy, and conquering the known universe, what makes him an essential character is the simple fact that he changes. In the final issue of this amazing run, Darth Vader explains once and for all why there is such a big change in the Lord of the Sith between Episode IV and Episode V in wonderful fashion.

Despite his best efforts, Cylo is no match for Vader, even when he manages to turn off his enemy’s servos. In typical destructive fashion, Vader finally succeeds in killing his rival and returns to the Executor where the Emperor awaits. There, he is briefly reunited with Dr. Aphra before he gets to work with the task of captaining his new ship in his quest to find Luke Skywalker.

A large part of what has made Darth Vader a great series is that it explores the humanity of Darth. This being Star Wars, of course things are a little different because Vader’s humanity is explored in literal terms. Throughout the series, Vader has warred with Cylo in a battle that essentially pits man (Vader) against machine (Cylo). What’s neat about this confrontation is that it physically embodies the war that is happening within Vader himself. Half machine and half man, Vader is battling to keep his humanity alive both by keeping the Dark Side at bay and by not succumbing to the machines that allow him to walk and breath.

When Vader finally confronts Cylo on the bridge of his Space-Whale, a confrontation ensues wherein Vader gains the upper hand using a Jedi mind trick. Cylo is too smart for this, but the Space-Whale he’s driving isn’t. Doomed by Vader’s mindtrick, it crashes into the sun taking Cylo with it. 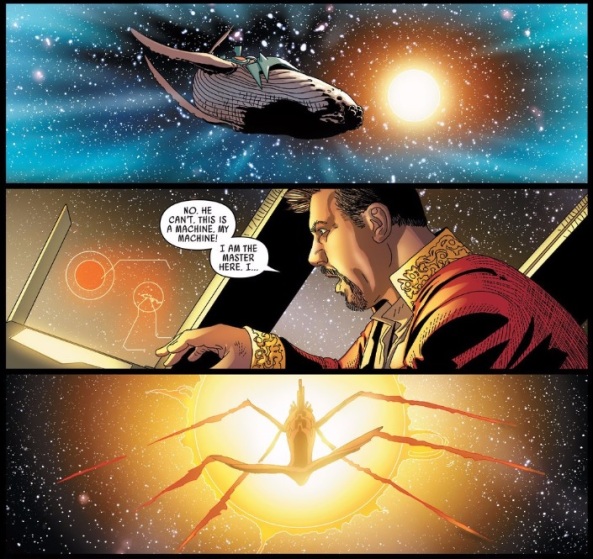 It is a triumph for Vader in many ways. First, it affirms his place atop the hierarchy directly below the Emperor. It also proves that nothing in the universe is more powerful than the force, which is something Cylo only learned to late. Most importantly, however, it shows that Vader has won the war of machine versus man. While that certainly earns him prestige and honor, the more important thing it proves is that Vader is human. Ultimately, this proves to be incredibly important in his life. When his son Luke is about to be killed by the Emperor, it is Vader’s humanity that causes him to betray his master and save his son. Vader’s journey back to the light side starts at this moment.

Of course, this isn’t to say Vader got here by recognizing his humanity or the humanity in others. Throughout this series Vader has killed, double-crossed, and colluded to get the things he wants. Dr. Aphra tells the Emperor all of this but instead of being angry about it, the Emperor is pleased. 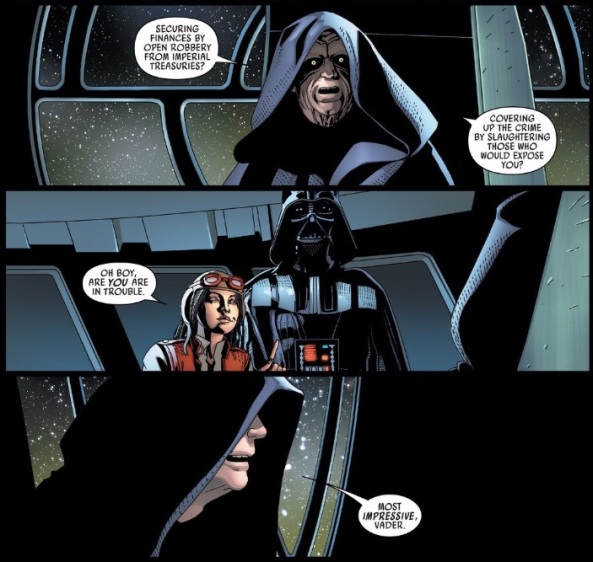 It’s unclear whether this has been the Emperor’s plan all along or not. Throughout this series Kieron Gillen has made it a point to show us the strained relationship between Vader and his master, and it’s always been unclear who has had the upper hand. Palpatine is known for being a dealer in the dark arts, particularly when it comes to manipulating others, so the thought that all of the shit he’s put Vader through is part of a plan to toughen him up is plausible. If that’s the case, the irony of it is that in making such a fearsome beast, the Emperor was essentially creating the very monster that eventually brings him down.

And oh what a monster Vader has become. As soon as he returns from killing Cylo, Vader tries to kill Dr. Aphra and takes control of the Executor. 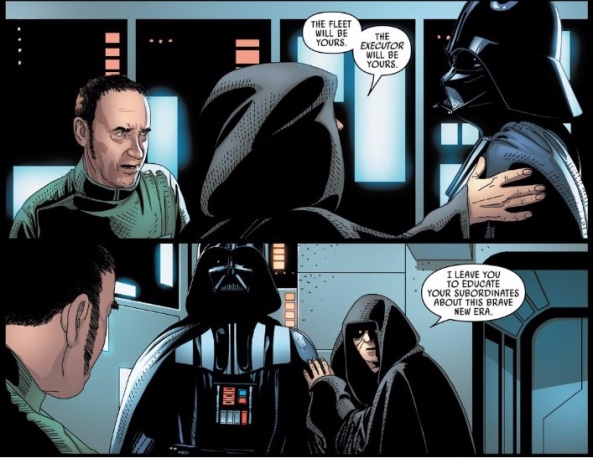 Here he wastes no time in killing his old nemesis Grand General Tagge, which begins a trend of killing his subordinates that continues into Episode V. What makes this move significant is that it finally explains how we go from a Vader who is a subordinate suffering insults in Episode IV to a Vader who is a menacing murder machine in The Empire Strike Back. Having emerged from the Emperor’s crucible of plots and subterfuges, Vader is empowered by his hatred and newfound confidence in his abilities. Knowing that he can take anything the Emperor can throw at him gives Vader the knowledge that he can do what he will without fear of repercussions.

It really is amazing what Gillen and Salvador Larroca have done with Vader’s character in this series. They have at once made him more terrifying than before but also managed to humanize him more so than any of the prequels ever did. All of these elements are in play in this issue and just like the 24 issues that proceeded it, this issue is a delight to read for any Star Wars fan.

Patrick, do you agree? I’m finding it hard to capture all of the great things happening in this final issue – it’s just that good. What were some things you noticed that I didn’t get around to talking about? Also, how do you feel about the codas that go along with this issue. I could have lived without the Dr. Aphra ending (even if it explains her future spin-off series) but I loved the bizarre Tusken Raider story. Your thoughts?

Patrick: Yeah, I was a little bummed out to see that Dr. Aphra survived this issue. Gillen and Larroca play the scene of Vader leading her to the airlock with such plodding, fearsome grace that it’s almost frustrating to see the consequences of Vader’s horrific actions erased. 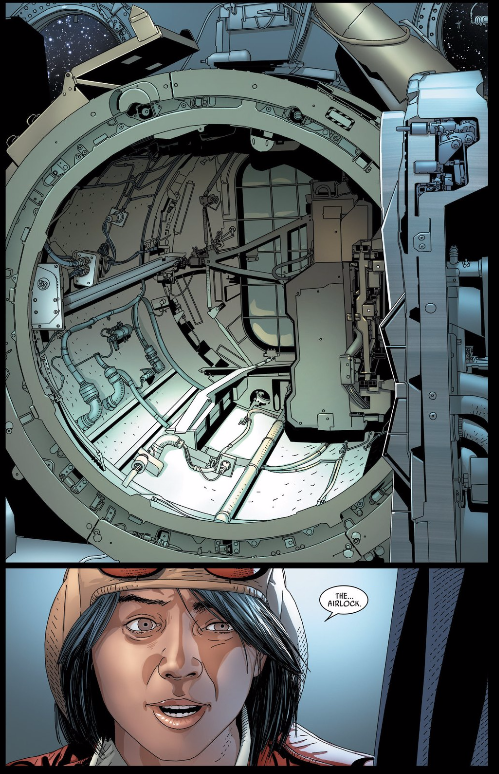 Larroca lets it take up the entire page, and Gillen offers no explanation from Vader. It’s an inevitability. It’s cruel. It’s powerful.

We did just get word that Gillen would be continuing his work with Star Wars comics through a Doctor Aphra series, so I guess I’m happy we still have her around for that, but man, how cool would it have been if Vader killed one of the things we genuinely loved about this series? Darth Vader may be the protagonist, but he’s also the villain, and the villain is supposed to take something away from us. I know his actions aren’t any different — he still thinks he’s killing Dr. Aphra — but it does rob the end of this series of a well-earned, and well executed, gut-punch.

(Incidentally, this is why you’ll never see a quote from Retcon Punch on the back of a trade – anytime we’re saying something really nice, we’re also sort of pointing out what could have been better, or where the goodness sells itself out. Oh well.)

The Tusken Raider story is, indeed, bizarre. I’m not quite sure what to make of it, as Gillen takes his standard Darth Vader handicap and limits his use of language even further. It is a silent tale, one even without sound effects or the grunts and growls that you’d normally associate with Sand People. In it, the lone survivor of Vader’s most recent genocide meets up with another wandering tribe and relays the dark and terrifying story of the day this powerful masked wizard-robot came to murder everyone. Artist Max Fiumara illustrates the survivor’s story as impressionistic paintings on a textured background that implies they’re on some crude Sand Person canvas. This is basically the Tusken Raider version of Star Wars.

We’ve posed the question “what is Star Wars?” more than just about any other single question since this series began 2 years ago. We were skeptical that what we love about the film series would reasonably carry over to the comic book page. After all – what’s Star Wars without a sweeping symphonic score? Without dazzling special effects? Without cinema? It turns out that there is a great deal of Star Wars’ culture cache stored in graphic design, and Darth Vader’s design specifically. Whether on screen, in the comics, or frantically sketched on bantha hyde, it’s a powerful fucking image. All audiences respond to it, even this tribe of Sand People that construct a giant monument to Darth Vader. They might try to burn it down, but man, nothing says “this is important to us” like erecting an effigy.

That’s what this whole series feels like to me: Gillen and Larroca building up Darth Vader as a kind of put-upon anti-hero, only to totally burn him down. What we’re left with at the run’s conclusion is decidedly different from what we started with, as Taylor so ably illustrated above. In issue 24, Vader dueled and defeated a young Anakin Skywalker in the force-plane of his mind, and in this issue, he is able to use his humanity to overcome his over-ridden mechanical components. That means that he’s destroyed the man he used to be, but rather than become merely a machine, he has become a new man.

Whether or not this is the Emperor’s plan is hard to say. Hell, I’m not sure he even could plan for such a thing. Oddly, it was his hope that Vader would allow his emotions to dictate his behavior in recklessly ambitious ways. It’s a cool reminder of how necessarily unsustainable the Dark Side is, as its champions will always eventually act in their own interest over that of the group.