Spencer: When discussing the first issue of Hadrian’s Wall, we were pleased to report that the series was more about the fallout of Simon and Annabelle’s former relationship than about sci-fi tropes, or even the actual murder mystery. With Simon’s very specific scenario now thoroughly established, though, Kyle Higgins, Alec Siegel, and Rod Reis are free to use issue two to dive more into the mystery, and specifically, into introducing the list of suspects. Even in the middle of all this very necessary groundwork, though, the creative team never loses sight of Simon, his past, or what makes him tick.

But yeah, Higgins, Siegel, and Reis’ first priority is introducing the crew of the Hadrian’s Wall, and they do so through a whirlwind of a cold-open where Simon interviews each crew member in succession. The first few pages are each devoted to a single specific suspect, but there’s overlap from the start, as Simon’s final question on each page is actually addressed to the next suspect on his list. By the fourth page we’re starting to see more than one suspect a page, and the pace only picks up from there; put together, it paints a picture of an overwhelming, somewhat monotonous process. Even with the ability to go back and reread, it can be a lot to keep all these characters straight — thankfully, the creative team provides us with some handy notes. 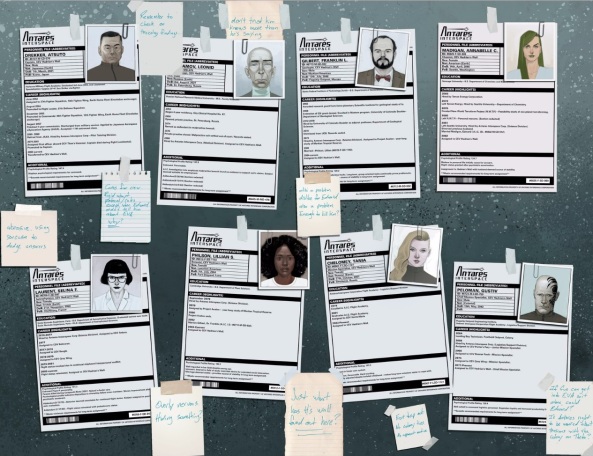 I have a feeling I’m going to be revisiting this page quite a bit throughout the rest of this series, and not just because I haven’t memorized all these characters’ names yet. Up until the last page of this issue, Higgins and Siegel stick exclusively to Simon’s perspective, meaning that the readers know nothing more about the suspects than Simon himself does. His notes are our notes, so if we’re interested at all in solving this mystery, they’re the best place to start.

Of course, it’s really too early to get a clear read on these characters yet, but it’s fun to try. Is Philson just nervous because she’s young and inexperienced, or is she hiding something? Is Peloman actually suspicious, or am I just stereotyping him because of his appearance? Is the Captain so antagonistic because he’s in on the murder, or is he just trying to do his job in the gruffest possible manner?

I love that first panel there: Captain Drekker looks like some sort of puppet master, or even the Dungeon Master of a D&D game. Considering how badly he seems to want Simon out of the way, could that be some sort of sign that he’s secretly behind everything? Or is he literally just doing his job? It’s still too early to know what’s a clue and what isn’t, but I can guarantee that paying attention now will pay off down the road.

Simon saves his interview with Annabelle for last, of course, and even if they technically only talk about Edward’s murder, there’s quite a bit of underlying tension between the two.

It’s hard to tell what’s simply Simon’s typical questioning and what’s his curiosity about his ex’s life. After all, his questions are probing, yet still somewhat routine; he didn’t ask any other suspects about their sex life, sure, but none of the other suspects were sleeping with Edward, either (that we know of, at least).

But what really sells the tension between Simon and Annabelle is Reis’ staging. This page is nothing but nine consecutive close-ups. The camera is so close to each character’s face that it’s uncomfortable. The panels are so close together, the same shot in each so constant, that it again just feels uncomfortable. This page suggests familiarity and intimacy, but also discomfort. Simon and Annabelle’s former closeness is only making this process more difficult for them both.

Reis’ color choices are equally capable of carrying a scene. Check out this page of Simon and Marshall for a great example. 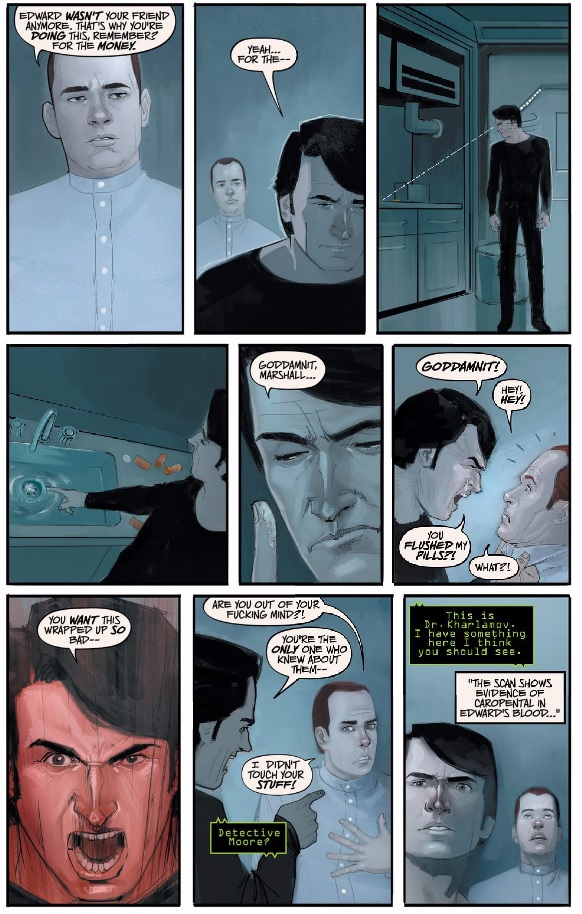 The most prominent feature here is the contrast of colors — the orange of the pill bottles pops against the room’s cool colors, making their displacement all the more obvious, and of course, Simon literally turning red in anger after a page of being colored as pale and blue is a startling contrast as well. There’s also a contrast in clothing. While Simon has a dark jacket he wears during his interviews, in his room he’s decked head-to-toe in black, to the point where you can’t tell where his shirt ends and where his pants begin. This is a stark contrast not just to Marshall’s white shirt, but to Annabelle’s white dress and the similarly light-colored outfits of most of the Hadrian’s Wall’s crew. Simon’s use of black literally sets him apart from every other soul on the ship.

It’s no mistake that Marshall’s clothing choices seem to align him more with the crew than with Simon — as the cliffhanger reveals, Marshall is in cahoots with Edward’s murderer. I can’t wait to see how Simon responds to this betrayal, because that’s exactly what it is, and Simon’s already dealing with one betrayal of trust in the form of Annabelle and Edward. Adding another to the mix could be enough to break the poor guy.

Ryan, do you think you noticed any clues I may have missed? Do you have any further thoughts about the mystery or Marshall or Simon and Annabelle, or about Reis’ art? I can’t wait to see what you got out of this one.

Ryan D: Heya Spencer! I really dig your points about the use of color in this issue thus far. I think that there are many great choices being made on this title which lend a great deal to the overall feel of Hadrian’s Wall. One very subtle choice I noticed which tickled me a lot goes into how deliberate Rod Reis gets when planning out a page. With the dialogue between Annabelle and Simon you used earlier being an exceptional example of how standard paneling can add a very particular cadence and vibe to a scene, I also love how some of the non-traditional panel composition can influence a story. As the curtain goes up on this issue, the first image the audience sees is the establishing shot of the ship, backdropped by the planet.

While this is nothing novel unto itself, the colors and swirls of space and the planet’s miasma spreads from the image into the gutters around the adjacent panels, giving me the thematic idea that, no matter what happens between characters, everything which takes place occurs under the broader context of a spaceship, in space. This also reminds my brain that, while the plot stays firmly grounded with inter-personal dynamics, there is no firm ground afoot. A lovely little touch.

I must also, from a standpoint of the visual mechanics of this title, note the very particular lettering from Troy Peteri. Since this story is mostly being portrayed from the perspective of Simon, I love how there is the slightest wobble to the letters. Instead of being picture-perfect, the letters here make room for some interpretation; I choose to interpret this wiggle as perhaps a side-effect of Simon’s opioid-addled brain. The letters add a strong effect here, which ends up being drawn out in dialogue by Dr. Leonid:

If even the lettering seems a bit off, than what can one trust while reading Hadrian’s Wall? The lead detective must constantly be uneasy, and the very idea that anyone could be the murderer keeps the audience on edge as well.

And that’s what good mysteries do. In response to your earlier question, Spence: did I discover any clues you may have missed? Well, probably not, but if I had too much of a clue, I would even then second-guess it as a red herring. A good mystery shows you all of the pieces but hides the real puzzle, and with a good creative team featuring Higgins and Siegel, I refuse to put down any guesses. I hate being wrong about these things. Because despite being set in space, this title makes no pretension that it is anything aside from a mystery story.

This brings me to my big thoughts about the two-issue run thus far. Firstly, I am interested in how Hadrian’s Wall likes to blur the line of genre, which we did talk about a bit in our review from number 1. One of my favorite films of all time is Alien, which is commonly referred to as “a haunted house in space.” This was revolutionary at the time, when sci-fi was pretty much just sci-fi. Here, we have a different kind of house: the traditional murder-mystery house from the days of yore, before noir came along and made the detective just as important as the mystery; before, the danger came from within a very enclosed, isolated environment as opposed to the sprawling threat of urban apathy. Now we have all of the trappings of an Agatha Christie novel, but with the cold vacuum keeping the drama enclosed as opposed to miles of foggy English countryside, for example.

I really enjoy this series thus far. I guess my question is for next steps forward is: why relegate such an amazing conceptual backstory to just window-dressing while going on with this narrative? On one hand, it is extremely refreshing to keep the plot focused upon Edward’s death and the Annabelle vs. Simon’s dynamics. That being said, if the world of the play is relegated to backdrop for too long, I feel like the team will have missed a trick — especially if the world is used for the eventual reveal at the end. Hmm. Consider that as a curiosity as opposed to a critique in any way, because this team deserves acclaim for their ability to use a world to their own devices while telling a story which feels so happily familiar despite its beautiful, exotic trappings.