Ryan D: Descender 16 drops the reader directly into the past, without even stopping to say hello to the cast from last issue’s focus on Andy and Effie/Queen Between. From the cover and the lovely introductory spread, it is clear right away that it is now Driller’s turn to get the spotlight treatment. As soon as we see the two robots being dropped from orbit into the Dirishu Mining Colony, it became very clear to me where this issue was heading: we met Driller alone on the planet, so something needs to take us from Driller having companionship to its solitary, human-hating life. Though the arc seemed fairly obvious, it was still a treat to see this robot get some well-deserved further characterization, not to mention the big reveal at the end.

Driller and its partner, Scoops, are greeted on Dirishu by Henry Tusk, who plays a very important role in Driller’s formative years. I appreciated the little nod to QuonTech’s new personality upgrade given to these two robots, explaining why they were written as finding their voices. Tusk is not a bad guy, nor a good guy — he is a man who chose a brutal job in off-planet mining to support his kids. Is he super nice to Driller and Scoops? Not particularly, but hey — these are robots. One doesn’t get angry if a person kicks a jackhammer in frustration, so why would we judge this man for treating his equipment like the machinery they are? We get to see more of the robots’ personality in the moments when the two are charging after work than Tusk ever got to see in the five years he spent digging with them. One page shows this time lapse very well:

Great page. It felt delightful, as I got to the top of it, knowing that my eye was about to take a lovingly crafted journey from the top left of the page, down diagonally, and out on the right. Also prominent here is the visual motif which Dustin Nguyen played with for much of this issue: the colors. Down in the mine, wherein most of the action takes place, the color palette is restricted to a mix of blacks and grays, which Nguyen still gives a wonderful life to, using his watercolor-esque style to portray the depth and nooks and crannies of the cave. Even Henry Tusk, and all of the other humans for that matter, feature a very limited color set, looking a very lifeless grey-blue. This makes Driller and Scoops, red and blue respectively, pop out during the entire read. I love this thematic use of color, underscoring the writing’s quest to display these pieces of mining equipment as the dynamic characters in this script, who are learning and developing in ways that the other human characters don’t during the issue.

Perhaps the best part of issue sixteen was the endearing pages dedicated to Driller and Scoops’ late-night chats. The two robots speak in very stilted, first-person referencing language, and their thoughts come across as surprisingly child-like for robots of their imposing, sturdy frame. I particularly fancy this scene: 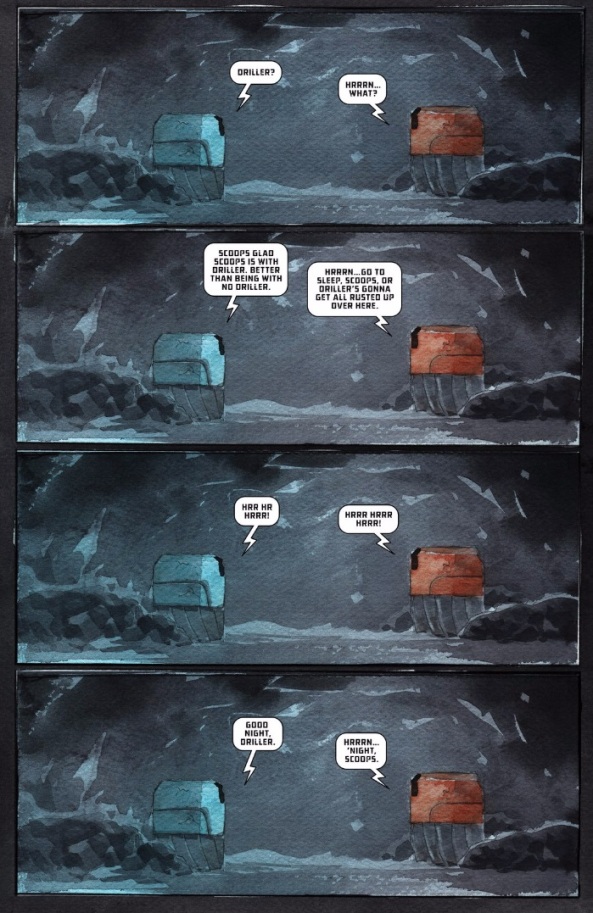 While comics technically tells all of its stories via static images, I always get a kick out of the use of repeated images, and to what effect. Generally, it instills in me the feeling that time is passing, but very deliberately, beat by beat, and generally at a much different cadence than in any other part of the issue. This fits perfectly here, especially while considering that this is a very important conversation between Driller and Scoops. When analyzing a scene as an actor, one of the many considerations is deciding which moments are “firsts” for the characters, as “firsts” generally carry more emotional weight, and force the characters into a choosing how to react to a situation which they have never handled before. The first time, here, that Scoops offers its attachment to Driller is a very “emotionally” vulnerable moment for Scoops, as Driller not accepting would be painful. On the flip side, seeing Driller respond with humor showed me as an audience member how Driller was developing — how its QuonTech personality module was writing itself in reaction to these stimuli — and told me more about that Driller than I knew before, all of which stand in stark contrast to the jaded, hrrrman-hating battle bot we have seen over the past fifteen issues.

All in all, while I saw a lot of this issue coming, it was enjoyed watching how Lemire and Nguyen told the story of two robots developing personalities together. Spencer, what’d you think about the big reveal at the end, linking Driller and Andy closer together than I had anticipated? How do you think this issue tidies up the “Singularities” chapter as a whole, with so many other questions – particularly about Tim-21 — remaining unanswered? And lastly: I’ve been thinking as of late a lot about the portrayal of rural, blue-collar workers in media. How did you find the characterization of good ol’ Henry Tusk?

Spencer: I’m not sure exactly how to feel about Henry Tusk, but he’s certainly a well-drawn and observed character who feels depressingly real even in this far-out sci-fi universe. I do feel a little sorry for Tusk, who’s working himself to death at a dead-end, thankless job to provide for a large family, but at the same time, he seems like the kind of guy who’d go home and take out his frustrations on said kids (as he does his robots), so I’m not sure exactly how much sympathy I can truly muster for him.

What I find most interesting about Tusk is that we never really see him do any actual work. He might have some paperwork, and I think I saw him push a rock once, but in general, his job seems to consist solely of bossing around Driller and Scoops, who do all the heavy manual labor themselves. When he complains about how hard he works, all I can think about is George Jetson, sitting half-asleep in a chair pressing a button twice a day and then going home and complaining about how difficult his job is. I kinda gotta roll my eyes a bit.

In truth, while Tusk fits the stereotypes of a blue-collar worker quite clearly, he’s actually a middle manager. His job consists of telling others what to do, and the stresses of his jobs come from his superiors putting pressure on him.

That pressure is, of course, unfair. I’ll never understand how bosses expect their employees to do work that is physically impossible or literally beyond their means, but it’s certainly something that happens pretty much every second of every day. Tusk can’t talk back to his bosses because he can’t dare lose his job, so he instead takes out his frustrations on Scoops and Driller. This is exactly how life’s social ladder works: those at the top, with all the money and power, are untouchable because they have leverage over everybody else, so the frustrations just get passed down, compounding with each rung and ensuring that those with the least always have the most pain and frustration to deal with.

Ryan, you asked how one could get mad at Tusk for treating Scoops and Driller like the machinery they are, and while that’s certainly the perspective of Tusk and just about every other human in the world of Descender, readers know that these robots are more than mere machines. Scoops and Driller have personalities, feelings, and aspirations just like any human being.

Even if those qualities were created artificially, it doesn’t change the fact that these robots have them, that they’re sentient beings. I’ve always related the story of Descender to September 11th, with the robot purge after the Harvester attacks standing-in for the persecution of Muslims after the attacks on the Twin Towers, but the story of Scoops and Driller feels more like a parallel to slavery.

I mean that about as literally as I can: Driller and Scoops are slaves. They’re owned by human beings and forced to work hard manual labor every day for no pay and no reward. They have no control over where they work or who they work for or with. Any qualms about owning slaves in Colonial-America were brushed aside because the African slaves were supposedly “lesser” than their white “owners” just because of the color of their skin, and likewise, Driller and Scoops are treated as sub-human just because they’re machines, with humans even using phrases like “robbie” (which appears to be the robot equivalent of the n-word) to further demean and other them.

Of course, Driller and Scoops aren’t literally humans, but as I’ve mentioned, they’re very clearly sentient. To ignore that is either a deliberate choice in order to justify continuing to work the robots unethically, or the result of extreme prejudice and xenophobia.

So I guess I can’t really blame Driller for lashing out as he did. It’s funny; I read an article earlier today about a couple different people who were scalped by Native Americans in the 1800s, and it was chilling. I’m equally disturbed whenever I see violent protesting even in the present day. I don’t like to condone violence, but in each of those cases, when I consider the circumstances leading up to them I can at least understand why violence was used. When you systematically steal an entire race’s land and wipe out their people, what do you expect to happen? When you treat an entire race like second-class citizens without full rights, what do you expect to happen? When you use an entire species to do your dirty work, pushing them until they break down and denying them any outlets for their very real personalities, what do you expect to happen? Driller’s attack was inevitable.

Ryan, you asked what I thought about this issue as the finale of the “Singularities” arc, and I’ll admit that it’s a bit of a quiet, sudden ending. I suppose I shouldn’t have expected too much forward motion – while time has progressed (albeit rather slowly) over the course of this arc, each issue has generally been a flashback-heavy standalone story without much connection to any preceding installments. While that hasn’t been good for poor Tim-21, who’s been trapped in a horrific cliffhanger for half a year now, it has done wonders for every other character in Descender. If/when Driller’s role in Andy’s mother’s death does come to light, it will be that much more tragic and that much more complex because we have such deep insight into each character involved.

I really can’t praise Lemire and Nguyen’s character and world-building enough. Nothing’s ever simple in the universe of Descender, and the connections between this world and our own only make this title richer and more thought provoking. I’m eager to see the narrative pick up again, but I can guarantee that the story will be even more satisfying going forward because of the work put into this arc.