Taylor: For many, it is a dark time. The forces of prejudice, greed, misunderstanding, and hate have conspired to elect a man of questionable values to the highest office in the United States. Unlike a lot of bad situations, many people are finding it difficult to find any sort of silver-lining to this circumstance. When the nation so emphatically states that they would rather choose a man who would divide us rather than a woman who promises unity, it’s hard not to see the logic in this thinking. But there are still wonderful things in the world. Just because ugliness triumphs for a day, it doesn’t mean that the beauty society has created thus far has been destroyed. Maybe that’s hyperbole, but on a day like today, Invincible Iron Man reminds me that all is not lost.

Tony Stark is dead — only living on as a digital ghost. Taking up his mantle is Riri Williams, a young girl who also happens to be a super genius. Though she feels unprepared to become Iron Man, Riri does her best when the world needs her. When Animax goes on a rampage in Montana, Riri shows up to confront her and along the way learns some important lessons on being a hero.

The thing that most stands out about this issue, unsurprisingly, is who is in the Iron Man suit. Riri Williams is basically the antithesis of Tony Stark in all but her intelligence. Born to an average family in Chicago, Riri, who is both black and a girl, couldn’t be more different from Tony Stark who was white, male, and born with a silver spoon in his mouth. However, despite their outer differences they are the same in the most important, essential ways. Riri is a hero and despite her reservations about not knowing how to be a one, still forges ahead to save the day. This headstrong nature and the willingness to help others is something she and Tony share, and in that regard it’s not hard to see why she is now Iron Man.

What makes Riri a convincing hero, aside from her conviction, are the hurtles she’s overcome to get where she is today. As a youngster, she acted out because she was bored by her toys. She often eschewed friends in favor of tinkering in the garage. She was shown love, though, by her step-dad and her best friend, Natalie. Cruelly, these two important figures are taken from her early in life. 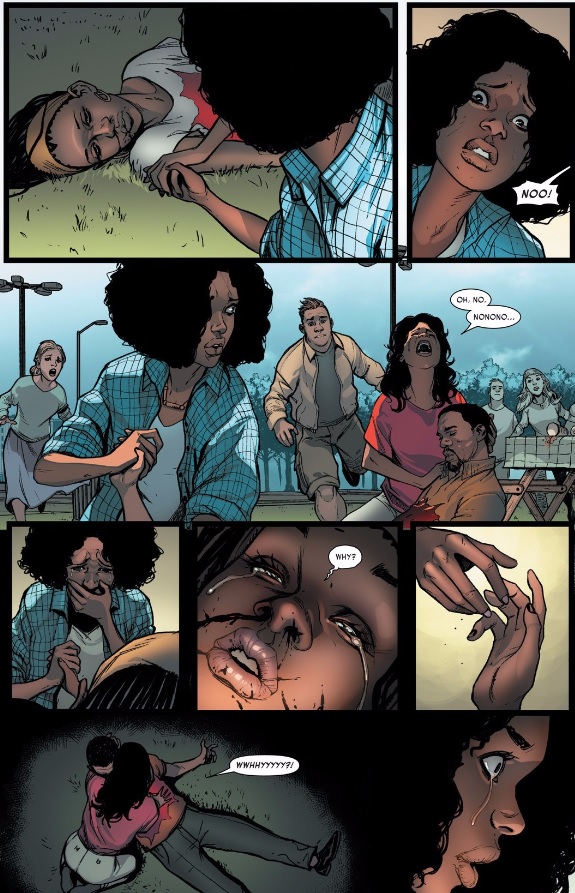 While I hate seeing Chicago once again vilified as a city of violence, the power of this scene isn’t lessened by it. There is something powerful about knowing that Riri has faced seeing her loved ones murdered before her but still choosing to be a hero. It would be so easy for Riri to bend under the ugliness of the world and use her immense talent for ill. Instead, she remembers the lessons her step-dad taught her and always finds the silver lining in situations, even on the dark days.

Speaking of which, the pacing of this issue is great and it leads to one of its best moments. The issue opens with a flashback to when Riri was a child and her parents find out she is a “super genius.” The doctor Riri’s parents are talking to says that most of all Riri needs love. That she needs to be shown the beauty of the world.

This panel, spoken by the doctor, leads to Riri finishing his sentence on the next page, in the future, flying in an Iron Man suit. It is glorious. 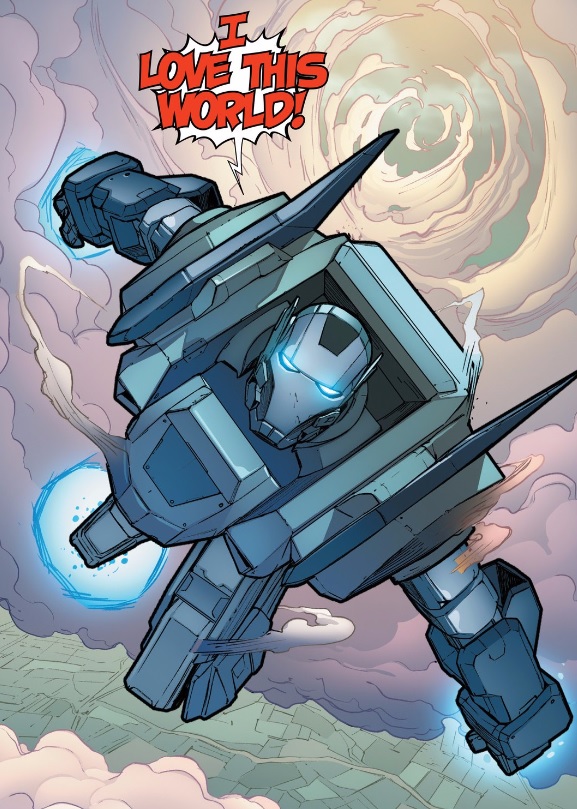 This comes at the beginning of the issue before it’s learned that Riri has had two important people in her life taken from her. Reading the issue a second time, it’s wonderful to see that she still loves the world. It is a beautiful and heartening moment. Despite the ugliness of her circumstances, Riri refuses to surrender and give in. She is resilient and optimistic. In other words she is a hero. I can’t think of a better person to be the new Iron Man because Riri knows how bad things can get, but still fights for what is good.

Drew, I’m aware I’m writing through the lens of the day’s events but I’m really energized by this issue. Does it do the the same for you? Perhaps looking at it without the lens of emotion, do you find it as good as I do? True, it’s a typical superhero origin story, but on some days that’s just exactly what you need. A story to show you that the world is still a wonderful place.

Drew: And that anyone can still aspire to be anything. When this series was announced, there were plenty of naysayers saying that a girl couldn’t be Iron Man, and it’s hard not to feel a little bit like those naysayers won this week (a woman can’t be Mister President), but this issue’s strengths stand as a rebuke to that attitude. This issue certainly has the trappings of an origin story, but I think the key tweak is that all of the origin stuff happens in flashbacks — our first glimpse of the present day is that splash page of Riri flying to the rescue in her Iron Man suit. That is, she’s already Iron Man. We get some context as to how and why a 15-year-old might be both qualified and motivated to do such a thing, but this issue seems less about those questions as it is about the fact that she’s Iron Man now (with maybe a little “deal with it” thrown in to goose the haters).

Taylor, I’m 100% with you that this issue was well-paced. The kind of loose sketch approach writer Brian Michael Bendis brings to her origin allows this issue to tell her story with remarkable efficiency. Indeed, the issue is comprised of only five distinct scenes (though admittedly, the battle with Animax in the present day is split into three instalments), but they are key scenes that establish the stakes for Riri and her mother. Scene 1 is set ten years ago, where that psychologist explains that Riri is a super genius and impresses the importance of love and support from her parents. Scene 2 is set five years ago, where Riri’s mother encourages her to go have play in the park rather than tinkering with her latest invention — Riri seems to be bucking an semblance of a normal childhood until she meets her best friend, Natalie. Scene 3 is set two years ago where Riri chafes under the rote support of her stepfather before both her stepfather and Natalie are killed in the crossfire of a gang shooting. Scene 4 (split up into interstitials that slot between each of these other scenes) catches up with the present day and finds Riri battling Animax, learning the ropes and discovering that she needs an AI in order to be most effective. Scene 5 finds Riri returning home after her adventure, revealing that she’s superheroing with her mother’s blessing before a courier delivers Tony Stark’s digital consciousness, who volunteers to serve as the AI Riri needs.

I skipped the previous volume of Invincible Iron Man, so Riri is a completely new character to me, but those five scenes are really all I needed to get completely invested in what she’s doing. It helps that artist Stefano Caselli imbues those scenes with all the gravitas we expect of a superhero origin, preparing iconic images ready for title pages, flashbacks, or other summaries of Riri’s early years. Taylor managed to capture many of the big ones above, but I’ll happily zero in on one of the smaller moments that I think is essential to Riri’s story:

This scene spends a good deal of time emphasizing that Riri doesn’t really have a normal childhood. Her mom has to force her to stop doing work and to go out to play — basically the opposite of any other ten-year-old. Riri is peerless, and the obvious implication is that she’s friendless, too. Natalie’s arrival seems to teak Riri’s priorities, grounding her with a real human connection we see bloom in just a few beautifully concise panels.

The other relationship that grabbed my attention in this issue was Riri’s relationship with her mother. Specifically, the fact that Riri’s mom knows and seems to be okay with the fact that her teenage daughter is fighting crime in a homemade Iron Man suit. I’m struggling to think of superheroes — especially teen superheroes — who aren’t hiding their superheroing from their parents. It feels like fresh ground to me, and promises to deliver stories completely different from the typical “I can’t tell Aunt May why I’m late for dinner” premises that have been used to add drama teen superhero stories from time immemorial. We don’t get a ton in the way of specific characterization for Riri’s mom in this issue (her cautiousness with the mysterious box seems completely counter to the notion that she would let her daughter fly around and fight crime), but I’m excited to see that relationship explored down the line.

I tend to think of writer Brian Michael Bendis as being very good with first issues, and this one is no exception. It carries us through all of the beats of an origin story, but really cutting it down to just those beats so the story can breathe. It’s a thrilling introduction to this character and her world, and features art that nails every one of those beats, from petty arguments with parents to fist-pumping superhero action. Time will tell if the series delivers on all of the promise of this issue, but I think we could all use something to be optimistic about right now.