Ryan D: Max Landis wised me up to “narrative potential” in a video from a while ago, but ever since then I can’t help but notice when a topic just screams with possibilities. This is the gift which is being presented to the collaborators of the new series Black Panther:World of Wakanda. Spinning directly off of Ta’Nehisi Coates’s current, ambitious run with the titular character, this series promises to flesh out the vibrant, complicated African nation in a way that will supplement the overarching story being told. While Wakanda may be the world’s most developed and advanced society — at once reaching forward as a progressive power-house and at the same time sitting comfortably in its heritage — it is also a nation recoiling from siege and tragedy. The opening chapter of World of Wakanda shows us two different glimpses into the prelude which lead to the current Wakanda read in the comics, one of a particular volatility, and thus far I think one of these two narrative paths is a much more gratifying path to follow.

The first of two stories being told here, written by Roxane Gay, follows the Dora Malaje’s rigorous training program, and ultimately the unlikely love which springs between two sparring women. These women are being trained to be the most elite guard in Wakanda, responsible for protecting the royalty and key figures of the nation, or occasionally acting as a special forces unit which nips threats in the bud before they threaten the status quo. The readers familiar with Black Panther already know the result of this romance: Ayo and her trainer, Captain Aneka, join forces and betray the guard upon which they swore their oaths. However, I have not been finding their story leading up to this betrayal to be as compelling as I had hoped.

Part of this disappointment might fall onto the onus of illustrator Alitha E. Martinez, whose pencils are not necessarily compelling me to read forward. In the current comic landscape with so many brilliant artists and page composers bringing new approaches to the medium of comics, I find it a bit pedestrian when the artist does not try to break convention or try something individuating. For example, this scene here: 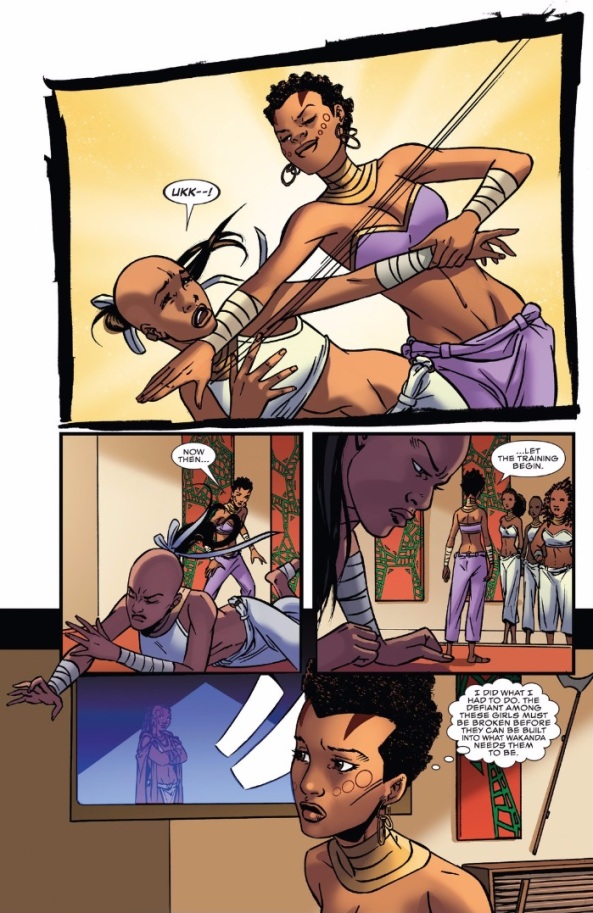 This results of this scene are telegraphed a mile away, and the journey there is not very thrilling. Though I enjoy the harsh boarders of the panel depicting the action, I realized while reading this issue that I have not seen proper thought bubbles as a device utilized in quite some time, and I now appreciate their absence. Thought bubbles can be used efficiently, but in this case I found it to be more of a case of the author telling the reader what is happening as opposed to showing it. When the inner life of the character is explicitly stated for us, I find there to be no thrill which comes from when a character’s inner and outer are at opposition – the staple of a compelling character. Though there is still plenty of time for the creative team here to find new ground to break with this tale, thus far the foundation seems to be a little too “by the numbers” for my taste. The art here is fine, and the story is fine, but though Coates’s run with Black Panther has not been flawless, it has at the very least been bold.

The second story being told here, however, comes with direct collaboration with Coates, and as a result seems much more nuanced and exploratory. The relationship Wakanda has with its neighboring countries, particularly Niganda in this case, is a complicated one, and challenges the reader to question the political actions of the nation and its long-term effects on people. The idea of a little girl who does not recognize such nebulous, seemingly arbitrary distinctions as country boarders provides a very lovely lens through which we can examine the repercussions of executive decisions on the ground-level.

Also sprinkle in a bit of the same fear realized in Stranger Things: the fear of a child’s knowledge and the power of a pubescent girl. These are two powerful tropes which offer a great insight into the woman who eventually grows into the cult of personality and leads the revolution against King T’Challa in the main series. And aside from the richer concept, I find the art shines  as well:

This page does so many things well. The crooked panel up top to sell the struggle within its boarders, the introduction of the advanced technology available to even the most common foot soldiers in this world, a mass grave to raise the stakes and prove that with technology does not necessarily come civility, and lastly that beautiful mind control panel, featuring the crayon-esque depiction of the soldiers’ weapons and deaths. The art has a stylistic flair, which particularly makes Zenzi a dynamic treat to watch throughout the pages. This is a coming of age story which also sets up Zenzi’s meeting with Tetu, and I feel that there are compelling places for this thread to go while exploring those relationship dynamics.

Patrick! How are you finding this new entry into the Black Panther saga? Do you think it is hurt or helped by the lack of T’Challa? Also, am I being too harsh on the Dawn of the Midnight Angels chapter, or did you also find it to be the weaker of the two offers here?

Patrick: I think you’re right that it’s the weaker of the two stories, but even with that concession, I do think you’re being too hard on it. I too was thrown off a little by the thought bubbles – that’s just not something you see in most modern comic books, especially not the more thoughtful, challenging comics. Both Ayo and Aneka’s thoughts are pretty well evident from their actions, and Martinez’ wonderfully expressive facial expressions, so it’s not immediately clear why we’re getting that information presented to us so obliquely and in such an archaic fashion. Unless the method of showing the thoughts is, in itself, a message. 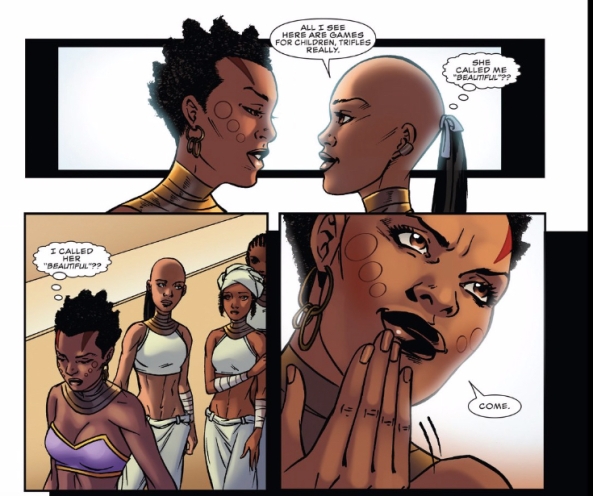 You know where I do see thought bubbles a lot? Archie. Mark Waid’s current run with the character has backed off of them a bit, in favor of the more stylish fourth-wall breaking Ferris Bueller-style addressing the audience directly. But that’s still buried in the comic’s DNA – part of expressing an awkward teenage love triangle is obvious thought bubbles. Now, there are like 100 million issues of Archie, and that white, middle-class, American straight cis-gendered romance represents the dullest, most vanilla relationship imaginable. It is “normal,” as presented by decades of comics. Gay is tapping into that language, but using it for two queer black African women. That’s a powerful assertion: these characters, which look and live nothing like Archie Andrews and Veronica Lodge get to have the same kind of trite romance.

It’s also worth pointing out the strong tonal shift in the middle of that first story. Ayo and Aneka have a quiet romance of stolen moments and missed connections for a dozen pages. This is when we get those thought bubbles, but it’s also when illustrator Martinez is at her least adventurous. The storytelling is measured, perhaps overly cautious, and generally kind of conservative. But again, that’s the language of the Archie-esque love story. All of this turns on a dime when we jump ahead to the the Dora Milaje defending Wakanda during the events of Avengers vs. X-Men. Gay and Martinez are intentionally abandoning a more childish form of storytelling the second their heroes are no longer able to treat their love as a kind of exciting forbidden fruit.

Plus, Martinez’ gift for acting shines through no matter how sophisticated the story is supposed to be. I’m blown away by the final page before transition over to the Dora Milaje in wartime. 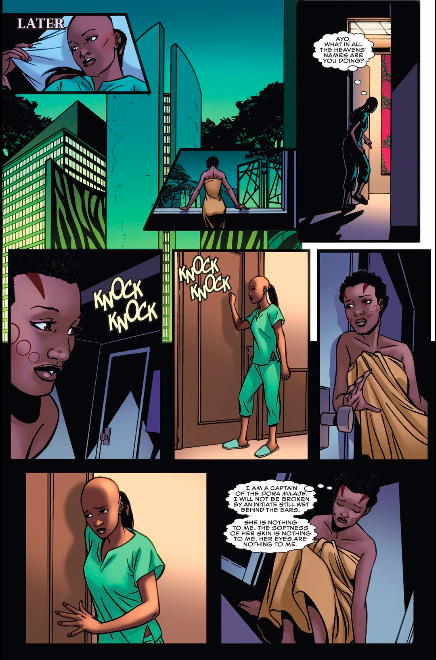 That top row of panels is kind of a mess, right? Three or four panels, depending on how you want to count it, and the panels of Ayo and Aneka solo have these angles that don’t really match up. Plus, there’s the hugeness of training building looming over them, representing the institution that keeps them apart. As we move down the page, that extra noise gets cut out, until the only players are Ayo and Aneka. They get one panel each in the bottom row, showing that their love, their connection, comes down to the two of them – and everything else be damned.

Plus, when all of that’s said and done, it’s a treat to see them on the battlefield together, messing up Atlantian goons. The final page promises more of that, which means we should also expect to get a better handle on why they will eventually become revolutionaries. There are a lot of layers two these characters, and I think we’re just seeing that first layer now.