Patrick: My father grew up in Theresa, Wisconsin. It’s a small, rural town a good 50 miles northwest of Milwaukee. Most of his side of the family is still there, cheering on the Packers and living lives I’m going to charitably call “old fashioned.” My father must have envisioned a better — or at least different — life for himself, and he got out, went to college and become an engineer. He worked in northern Illinois, the greater Chicagoland area, so the physical distance he traversed wasn’t enormous, but the philosophical distance he traveled was. He values education and art and compassion — a departure from what he was raised on. In turn, my siblings and I have all also moved away from our Wisconsin homestead and embraced cultural, societal and philosophical ideas even further from where we were raised. And not even in the same direction — my older sister is in the army, and my little brother is a crusader for homosexual homeless teens in Colorado. And I’m an artsy-fartsy comedian in Los Angeles. We’re allowed this room to grow with relatively little violence or conflict precisely because of the distance we’ve given ourselves from our stomping grounds. Brian Azzarello and Eduardo Risso’s Moonshine 2 shows just how traumatic that transition from one generation to the next can be when everyone stays in one place.

The issue opens on a trio of black kids hunting a snapping turtle in the swamps. It’s a weird scene with a violent chorus of “Hit ‘im! Hit ‘im!” While hunting this thing, the kids stumble upon a dead body, which sets the plot of the rest of the issue in motion. And while that’s something of a staple for stories that involve a murder being investigated, its interesting to note the roll the children play in this discovery. Immediately after this scene, a different pair of children make a separate discovery: Pirlo passed out in his car. This youngest generation plays the role of the persistent observer, finding, discovering, but seldom taking action. Risso keeps this second set of kids around, even when the scene has nothing to do with them. 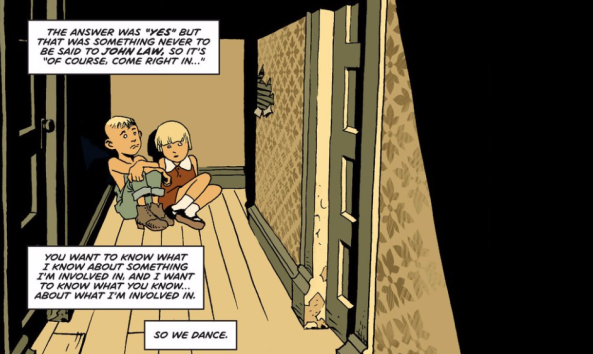 Azzarello is already telling two stories at once — the story of what’s happening between Pirlo and the cop and the Pirlo’s running commentary about how to live the life of a criminal hustler. But it’s important that we know the kids are watching this happen.

And what they’re watching is this sort of middle generation. Your Pirlos, your Sheriff Kellys, and eventually Hiram’s adult children (and their wives and husbands). That’s why Pirlo’s able to strike any kind of deal with Hiram’s progeny — they’re all eager to make a name for themselves. For Tucker et al., it’s about making some money in spite of Hiram, and in Pirlo’s case, it’s about delivering on what he promised Joe. Both Tucker and Pirlo are taking action that comes solely as a reaction to those of their elders. And the kids just watch.

So, you’d think that puts the reader in the role of the youngest generation. What are we if not the observers of the action? Risso has this uncanny ability to communicate the actual perspective of the more active middle-generation instead. Take, for instance, this amazing panel.

Pirlo is disoriented, panicked, and in an environment that is frighteningly rural for his city-boy sensibilities. So the image of the car driving through the woods emphasizes these characteristics — the majority of the panel is black, save for a poorly illuminated orb. When the car crashes — because, of course it’s going to crash — Risso pulls his punches where the accident itself is concerned. We see the wolf legs landing on the roof of the car, the panicked driver and then…he cuts away to the moon and a sound effect that reads “CRASH!”

We get to check back in as Pirlo regains consciousness. Three consecutive panels stay focused on the character, his bleeding (possibly broken) nose in the center of a shot that’s gradually pulling back over the course of the page. We’re coming to the same way Pirlo is, starting from a pronounced impression of the pain in his nose and eventually understanding the rest of the situation. This same principle is applied to our first vision of Hiram as the monster, who we’re almost literally seeing through Pirlo’s eyes.

Look at him! He’s fucking elemental, like there’s no difference between the forest and the wolf.

Pirlo gets away (in and awesome sequence that I’ll let Drew discuss if he so desires), and when he washes up on the shore of the river, he’s met by a sight familiar to the reader: those three kids from the first page. Only, they’re not just observers now — they’re joined by grown-up.

It’s exciting to see all of these active players slide into place, but I can’t help but wonder what we’re supposed to make of the impact this is having on the observers. So far, the only casualties are the people bringing it upon themselves through acts of defiant self-actualization only to be beaten down by the established power structure (i.e., Hiram as a wolf). It’s an orderly way to structure a story that might otherwise be a little too ugly to be relatable. I mean, it’s not like there are any heroes here — just some sleaze buckets we like more than the other sleaze buckets.

I feel like this second issue lacks some of the thematic clarity of the first issue, but man, is that build to the wolf-reveal effective. Did it work for you, Drew? Also, lotta cow skull imagery while Pirlo’s cooking up his plans with Hiram’s kids. Too on-the-nose or just on-the-nose enough?

Drew: Actually, Patrick, it might be even more on-the-nose than you realize. I’m no expert when it comes to skull identification, but I don’t think there are any cows there — rather, they’re all the skulls of game animals. To the outside world, they might look like hunting trophies, but the end of the issue reveals that the method of hunting might be different from what anyone assumes. Just before they encounter the wolf, Lou and Tucker are startled by a crazed deer that seems to be running for its life.

That moment transforms the logical piece of set-dressing that was the skulls into an unsettling bit of foreshadowing. Those skulls may have represented just how doomed (and hubristic) the Holt kids’ plan was from the start, but Lou doesn’t know that until he sees just how those deer were killed.

Patrick, you make a compelling case for our perspective being that of Lou’s throughout much of the issue, but I’m struck by how limited that perspective is. Or, at least, how limited the bits of it we’re shown are. In his voiceover, Lou suggests that he doesn’t remember much of what happened the night before. When the sheriff starts asking about the corpse of the man last seen alive walking into the woods with Lou, Lou explains that the man was helping him change a flat. But we have no way of knowing if this is true, half-true, or just an out-and-out lie. We know Lou did have a flat tire that night, but having not seen any of the events he describes — and knowing that he’s telling this story to a cop — leads me to some skepticism. It’s possible Lou had a role in this man’s death that he may or may not remember himself. That is, Hiram may not be the only werewolf in this narrative. Lou’s blackout benders may just be a clever metaphor for lycanthropy, but they may also be a cover for it.

That kind of secrecy is very much at the heart of this issue. The Holt kids are keeping their deal secret from their father. Lou is keeping the specific details of his struggles secret from Joe. Everybody is lying — except, notably, the kids. Look at how the little girl summons Lou to the telephone.

Lou’s first instinct is to lie, but that’s not an option, since the little girl has already told the truth. If we were truly seeing this from the kids’ perspective, I might trust everything we’re told, but since it seems to be Lou’s perspective, we have to take everything with a grain of salt. It’s almost impossible to tell what he’s leaving out of his story.

Which brings me back to the woman that joins the kids when they discover Lou washed up on the bank of the river. I believe she’s the same woman Lou was ogling at the end of the previous issue, which means, even if Lou genuinely doesn’t remember that night, she might. Did he turn into a werewolf, or just a drunken lout? Did he attack her friend, or did he attack her? With Lou so tightlipped, it’s difficult for us to guess what might have happened that night, but with her back in the mix, I suspect we’ll know relatively soon.

For me, that’s actually where this issue raised the stakes. I mean, sure, Lou now knows that Hiram is a werewolf (which, actually, are we sure that’s Hiram?), but he already thought he was unhinged when it came to protecting his business. He must have known doing business behind his back could put him in mortal danger — that hasn’t really changed. Instead, Lou is now put in a position where his cover might be blown. He might be able to lie to the cops, but this woman knows exactly what he did that night. That is, the truth about Lou might be more devastating than the truth about Hiram, werewolf or no.