Drew: A few years ago, fellow Retcon Puncher Patrick Ehlers suggested that deconstruction had become so commonplace in Batman stories that they had come to become inseparable from the character. That is, deconstructing the character had become as essential to the telling of Batman stories as Batmobiles and gimmicky villains have become essential to the stories themselves. It’s a compelling argument — especially when you consider the fact that modern interpretations of the character are all informed by Frank Miller’s famous deconstructions of the character — but I maintain that it’s largely incidental to his existence. To me, the key fact is that Batman has been around (and beloved) for 75+ years, so of course creators that grew up with the character are going to relish playing with that history. I can expound on why I think that negates Patrick’s point in the comments, but for now, it’s enough to say that I think the deconstructions have more to do with nostalgia than anything intrinsic to the character. Nostalgia is certainly a central theme in Batman Annual 1, an anthology issue that brings together some of Batman’s most famous stewards, past and present, for a walk down memory lane.

The issue opens with a story by the current Batman writer of Tom King and recent (returning?) artist David Finch, offering a kind of updated origin for Ace the Bat-Hound. The story is really about Alfred’s selfless love of Bruce (and Bruce’s tone-deaf obliviousness of Alfred’s gestures), but I’m most enamored of the tone. Ace the Bat-Hound is one of the sillier elements of the Bat-Family of the ’50s and ’60s, truly testing the limits of Batman’s dedication to training and discipline. King actually finds a way to make Ace as trained and disciplined as any of Batman’s other sidekicks, but he also hangs on to the silliness. Just look at the problems Batman is facing as Alfred struggles to train the dog: 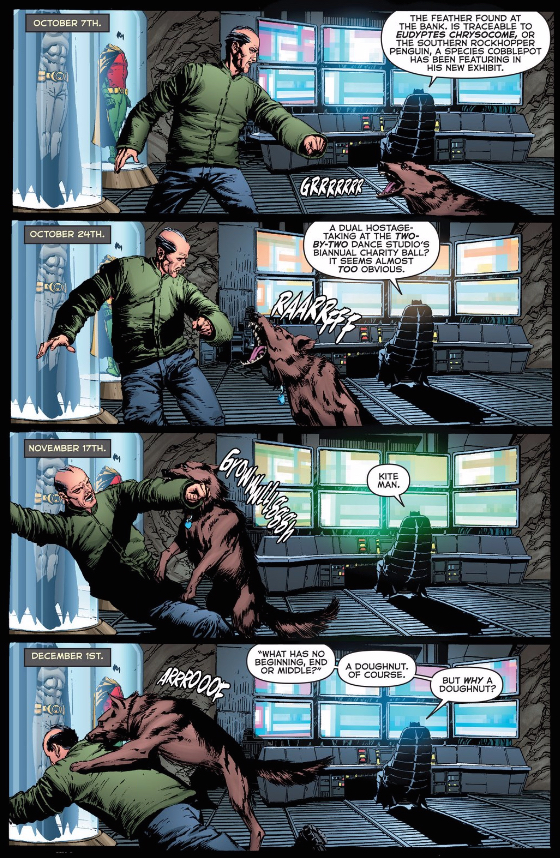 These could be lines right out of the ’66 TV show. I’m particularly tickled by the way King carefully evokes each villain without naming them with the obvious exception of “Kite Man,” who gets all of the explanation he deserves.

For me, this story was the highpoint of the issue. Indeed, they seem to be ordered in terms of my preference for them. The next story, written by Scott Snyder and Ray Fawkes and drawn by Declan Shalvey is by no means bad, but it so strongly evokes Snyder’s own Batman 51 as to be a bit redundant. It’s not the most flattering allusion to make — where Batman 51 felt like a love letter to both the character and the readers, this one necessarily feels derivative. It’s still trading in nostalgia, but without enough time between the original and the homage, it loses its charm.

The next story, by Paul Dini and Neal Adams should have been a nostalgia knockout — two comics legends working on Harley Quinn, a character one of them created — but their tones never quite match up. Dini gives over a great deal of storytelling space to Adams, but it is largely squandered in panels that muddle the message. Just take a look at this text-free sequence: 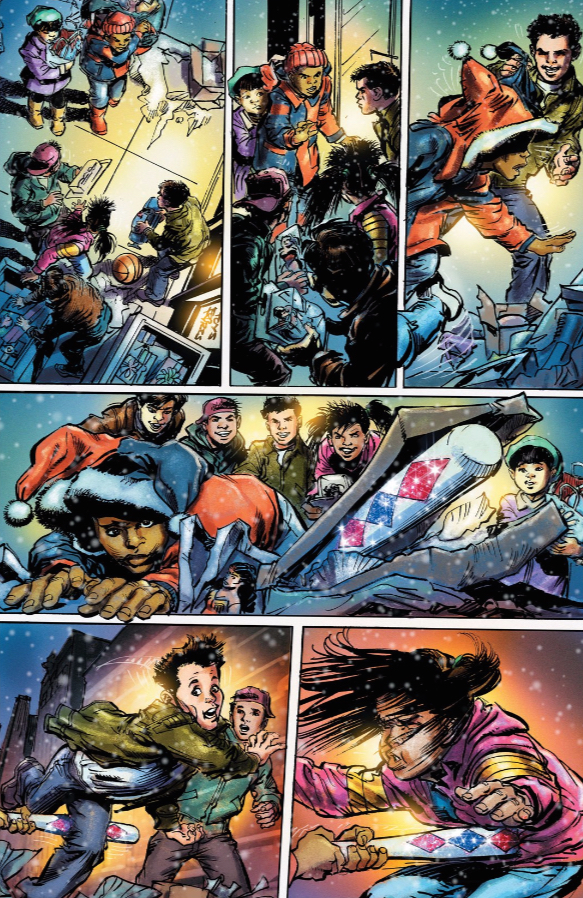 What the heck is going on here? None of the bullies are properly introduced, so when they start getting beaten with a bat from a character off-panel, I have to flip back to remember if these are the bullies getting their comeuppance, or if they’re the ones doling out the beatings. Worse yet, it’s incredibly difficult to understand the situation that started this fight. The previous page suggests that the two girls are bringing gifts to the “toys for tykes drop off” but since we don’t understand the significance of that point, I didn’t quickly recognize that the bullies, introduced in the first panel here, are stealing from that drop off. Without proper context, it looks like the two girls just walk up to a group of kids to start some shit — at the very least, that second panel should have reversed the shot to make the bullies look like the aggressors.

That sequence is emblematic of larger problems in the story. Ostensibly, Batman is observing this entire exchange, determining that he doesn’t need to intervene, but we only see his car speeding past the scene on the previous page. It’s almost never clear where Batman is relative to the action going on outside of the batmobile, so the fact that these apparently Harley-inspired acts of violent vigilantism endeared Harley to him doesn’t quite come across — his sudden change of heart feels as arbitrary as the scenes leading up to it.

Ugh. The final two stories were just as unsatisfying. Steve Orlando and Riley Rossmo offer an introduction to a new villain, who we’re promised is “coming in 2017.” Unfortunately, because the issue follows a character we don’t know, ending with his death at the hands of another character we don’t know for completely unknown reasons, it conveys virtually no meaning. All I know is that Stag is coming, though I couldn’t tell you what series Stag might appear in next. I was similarly nonplussed by Scott Bryan Wilson and Bilquis Evely’s story, which ends with Batman miraculously engineering a fear gas that also paralyzes its victims. It’s an odd twist that doesn’t seem to mean anything — it would have been just as thematically resonant if he had used a generic tranquilizer, or just punched their lights out.

Michael, maybe you can find more to redeem the back half of this anthology, but I’m at a bit of a loss. It’s a shame, because I really loved that opening story. I suppose I can’t blame you if you only want to talk about the good bits (I’m kind of wishing I had), but I’m curious if you’re finding any good bits where I’m not.

Michael: Annual issues, amiright? Drew, I have to agree with you wholeheartedly, from top to bottom on Batman Annual 1. I shared your enthusiasm for the first story, your disappointment at the Harley story and your dissatisfaction with the final two stories. Since I’m so in line with your opinion, this might be a dull read but dammit I’ll give it my best shot!

To shake things up I’ll touch on the stories in reverse, starting with “The Insecurity Diversion.” First off I want to say that I really enjoy the premise of a low-level dose of Scarecrow’s fear toxin that preys on the insecurities of its victims. I wouldn’t mind seeing a full issue or two dedicated to the kind of self-doubt that we all face on a day-to-day basis.

I wasn’t sure if Delia Pflaum AKA Haunter was an original character or someone we’d seen before — Scarecrow has had more than one female counterparts in the past I believe. According to Batman, Haunter “kills people using their DNA. Skin cells. Hair.” 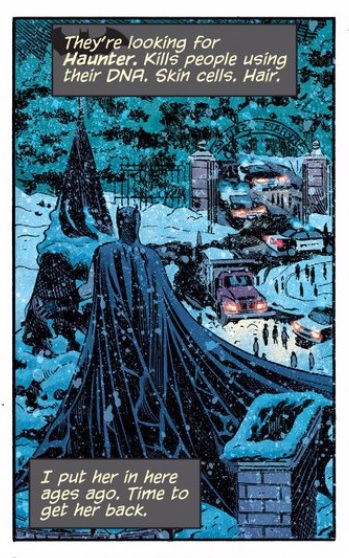 Umm…what? What does that mean? Listen, I’m not one who needs his comic book powers to be “realistic” or “scientific” but if you’re going to introduce a villain’s powers, maybe go a little more in-depth? At least show us these powers in action. Haunter is built up to be an unsettling character with an air of mystique. The story she debuted in is equally unsettling because it is so ill-defined.

“Stag” felt like a bit of a cheat, as it was more of a teaser for a future storyline than a self-contained short story. But that’s the thing about comic book annuals folks: there are no rules! Similar to Haunter, I wasn’t sure if I was supposed to know who Gotham’s sugar daddy Barry O’Neill was. Bruce says that O’Neill is almost a hundred years old but the way that Riley Rossmo draws him he doesn’t look a day over 65. Lazarus Pit, perhaps? I liked Rossmo’s visual of Bruce contemplating in the study however, it had a very Year One vibe to it. 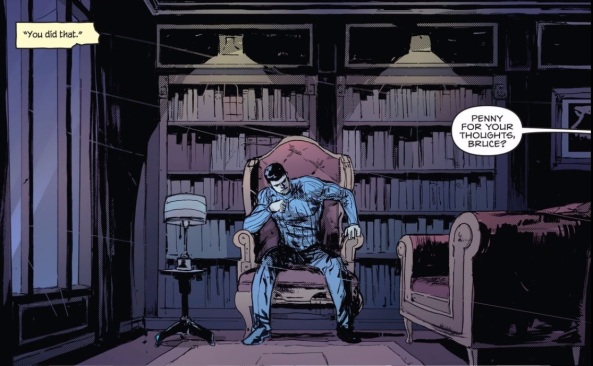 “The Not So Silent Night of Harley Quinn” was a letdown for me for the inconsistencies that Drew already listed. The elements of the story kind of work on a meta level: Harley Quinn fandom reaching unforeseen levels, written by her creator Paul Dini. Maybe the story doesn’t work because Neal Adams doesn’t connect the script to his layouts or maybe the story isn’t all that strong to begin with. We always like to say that showing is better than telling in comics, but you still have to provide a clear view of what you’re showing. It’s an odd mess of events that probably couldn’t even be salvaged with some helpful exposition or captions.

“Silent Night” was a fine story that just didn’t really do a whole lot for me to be honest. It’s a nice sentiment that Gotham can have a night off and Batman can see the goodness of its people firsthand. It’s completely stupid but my main thought throughout this story was that Gotham has street performers who risk their lives for public spectacle and don’t even accept a tip! Pfft, artists.

Ok best for last: “Good Boy” which actually might be one of my favorite Tom King Batman chapters yet. Just to clarify, the story is called “Good Boy” but I’m pretty sure this story establishes that Ace is a girl, right? Regardless it’s a short and sweet tale of humor, love and dog rescuing. I thought that making Ace a victim of the Joker was a nice touch that would justify Bruce and Alfred wanting to rehabilitate him. I also really appreciated the fact that Ace was an asshole, which was a running gag in Batman Beyond. What I liked about “Good Boy” was that it wasn’t a modern story that felt like it was apologizing for Golden Age continuity. Instead it was a vehicle to tell a tale of Alfred’s perseverance and care for the strays he takes in. 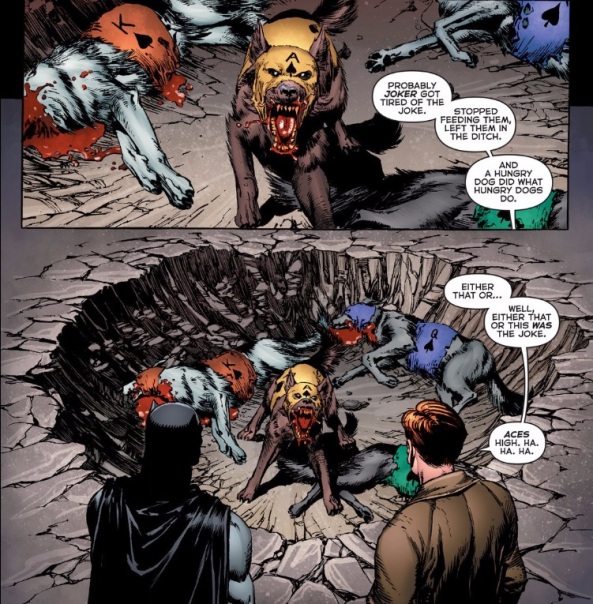 Annuals are mixed bags in general and unfortunately Batman Annual 1 was no exception. If nothing else we can all be grateful for that excellent scene that has Batman asking the question we will ask ourselves in our private moments over and over again: “But WHY a donut?”